WASHINGTON, D.C.—House Republican Whip Steve Scalise (R-La.) joined a coalition of pro-life groups, Members of Congress, and elected officials from Louisiana to rally at the U.S. Supreme Court today in support of Louisiana’s pro-life law that would require all abortion providers to have admitting privileges at local hospitals when emergencies arise.

The rally was held in conjunction with oral arguments in June Medical Services v. Russo to stand in support of protecting the basic health and safety rights of women and children.

In January, Whip Scalise led over 207 Members of Congress in filing an amicus brief to stand up for Louisiana’s pro-life law. 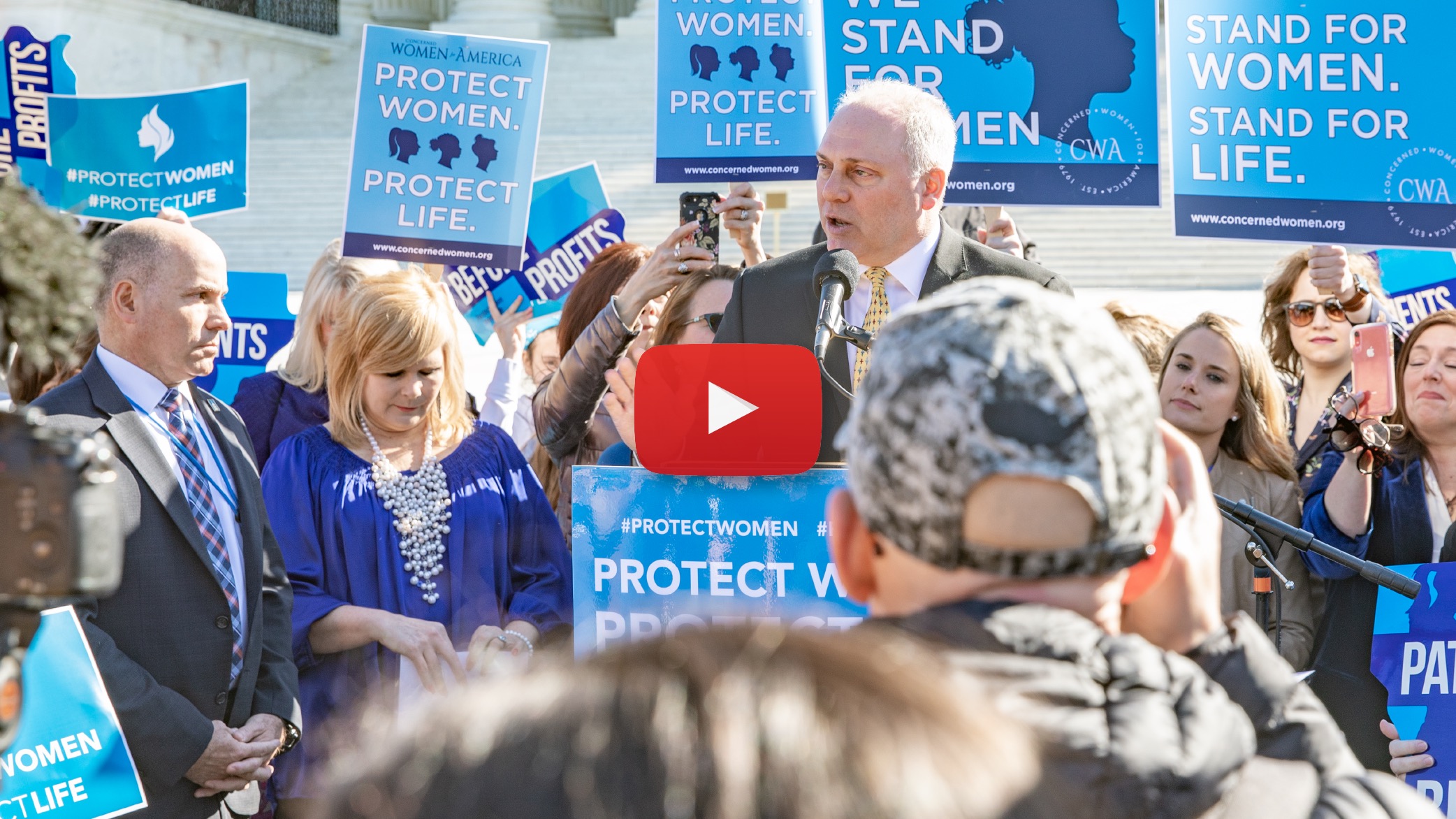 On the importance of the Born-Alive Abortion Survivors Protection Act:

“Welcome to Washington, D.C., welcome to the Supreme Court for such a critically important case that’s being heard. This is not just about the Louisiana law, though I strongly support the Louisiana law, and the coalition of Republicans and Democrats that came together to pass it. You know, when we talk about pro-life, in the United States and especially in Louisiana, it’s not a partisan issue. We come together in defense of life. We have three inalienable rights that we were given by our Founding Fathers: it’s life, liberty, and the pursuit of happiness. And what among those is the first inalienable right? It’s life.

“That’s why we’re here today to stand up for life. There’s so many battles being fought in this war, and I want to thank you for fighting on all of those fronts. My friends from Louisiana Right to Life, our friends from National Right to Life, Susan B. Anthony List, Family Research Council, Concerned Women for America, so many people that are dedicated to standing up for life. Right across the street, in the United States Capitol, we’ve had a number of votes. And in fact, last week, we had a vote on the House Floor for Ann Wagner’s [Born-Alive Abortion Survivors Protection Act]. Think about this: if a baby is born alive outside the womb, there should be no debate, if you kill that baby, it’s murder. And yet, in a number of states they are allowing that baby to be murdered in the name of abortion. It’s not abortion, it’s murder, and it should be a national standard, a national law. Unfortunately, when we had that vote, all Republicans voted for the bill but only three Democrats voted for that bill. Now imagine somebody going back home and saying they are pro-life, and many of them, by the way, ran saying they were pro-life and yet they came to Washington and they voted to allow the baby to be killed after it’s born alive. That’s going on right now, these are [on record] votes. Everyone ought to be held accountable for their positions.”

On upholding the basic health and safety standards for women and children:

“But, if you look what’s going to happen behind us at the Supreme Court, right here, why is this important? It’s important for a number of reasons. Number one: shouldn’t there be some basic health standards? If abortion clinics are going to operate, shouldn’t they be concerned to make sure those doctors actually have hospital admitting privileges in case something goes wrong? We’ve seen women die on abortion tables because the doctors weren’t prepared. And so, why shouldn’t we have those standards? That should be something everybody should agree on. But today, the [Supreme Court’s] going to resolve that issue when they have this hearing. And also, by the way, this is the first pro-life case that’s come to the Supreme Court since Justice’s [Brett Kavanaugh] and [Neil Gorsuch] have been put on the bench. I look forward to hearing their response to these laws that should be upheld.”

On the questionable role abortion providers have in representing patients:

“The other big issue at stake is standing, legal standing. Now should an abortion provider be able to speak for the woman getting an abortion?”

“Just think about this, a few years ago there was a law passed that said the instruments have to be sterilized – sterilized – should there be controversy about that? Do you know there are abortion providers that challenged that law on behalf of the women that they were operating on. Now can you imagine one woman going in to have an abortion saying she didn’t want sterilized instruments? But she didn’t have that voice because the abortion provider was able to legally stand up and represent her and try to challenge the law mandating that the instruments be sterilized. That’s what is going on here. [The Supreme Court] will resolve that question today as well. And I hope on both fronts, the Supreme Court rules not only in favor of life, but in favor of basic health and safety standards for women and children.

“I appreciate everything you do in the movement for life, it is a critical movement. We just had the March for Life a few weeks ago and to see tens of thousands of young people, our young high school students, college students coming to Washington to stand up for life – it is so inspiring and so encouraging seeing that the next generation understands as well as you do how important it is that we stand up for life. Thank you for coming here, let’s pray for a proper verdict by the Supreme Court and my good friend Katrina Jackson, a Democrat from Louisiana, but a dear friend who was the author of this law. She is in there today, pray for Katrina as well, and hopefully we get victory not only for life, but for women’s health as well.”