WASHINGTON, D.C.—House Republican Whip Steve Scalise (R-La.) joined Fox News Channel’s Fox & Friends to preview tonight’s Congressional Baseball Game and reflect on his recovery from the Congressional Baseball Game practice shooting, when he nearly lost his life. Two years later, Whip Scalise has made a strong recovery and will take the field tonight as the team’s leadoff batter to help lead the team to victory against the Democrats. 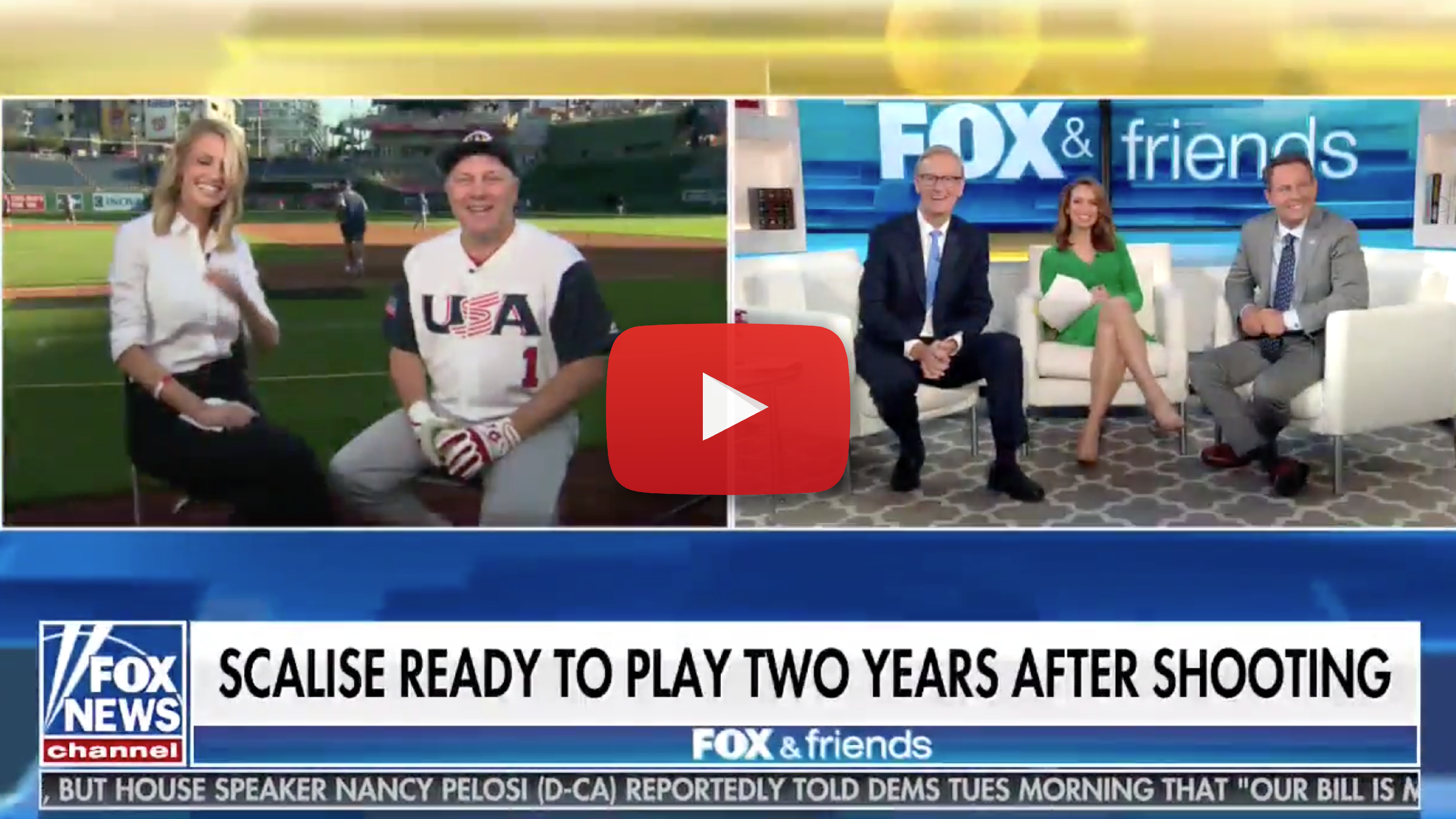 On returning to the game two years after the shooting:

“It’s been quite a road. I feel great. I can definitely feel how much better I am now, especially than last year. I was very limited in my mobility last year, but lucky to be alive. Still lucky to be alive but able to move around a whole lot better. I miss Doocy out there on the field. It was fun having him here with us, but you’re here with us. It’s just such a special moment. You’re on a Major League Baseball field with a bunch of your friends.”

“Yeah you know I’m moving around a lot better. By the end of the year hopefully, I’m going to be able to ditch the crutches all together. I still need to use them for long distances, but again God’s performing miracles and I just keep getting better.”

On turning to God and thanking the heroes who saved his life:

“It was one of those things. I’m crawling away and I had been hit and then all of the sudden everything gave out. I couldn’t move anymore. I could still hear a lot of gunfire and didn’t know what was going to happen next. I knew the one thing that I could do that I had to do was pray. It was amazing how it removed so much of the anxiety, and all of the sudden, I was calm. I knew that God was taking care of me and boy did He ever.

“David Bailey and Crystal Griner were my security detail that morning, my team leads. I’m wearing the Capitol Police hat in their honor. They sacrificed, both of them got hit in the shootout and kept going at it and took the shooter down. They are back. They are both going to be here tonight. It’s special to have them back out again.

“People like Brad Wenstrup, my colleague from Ohio who was a trauma surgeon in Iraq. He came out and immediately put a tourniquet on and stopped the bleeding. My doctor said that was really the only reason I was able to make it to the hospital alive.”

On the Democrats’ partisan border funding bill that fails to fully address the humanitarian crisis:

“Unfortunately, the bill that Pelosi passed last night is not a win for our border patrol agents who are trying to take care of these young kids. As you know, there is an influx of people at our border. We need to secure our southern border. President Trump is doing a phenomenal job of building wall and helping work with Mexico to bring more of their National Guard down to the Mexican southern border. That’s actually having a positive impact.

“Look, [Department of Homeland Security and Department of Health and Human Services] are running out of money right now to take care of these young kids. The President has been asking for over six weeks for a supplemental bill to help make sure we can take care of these kids. Pelosi has refused to pass it. Then last night, they bring a partisan bill. A bill that doesn’t solve the problem. That won’t become law, but the senate did pass a bill that will at least solve it. We have got to get something done this week.”

On the path forward to secure funding for the crisis:

“The clock is running. Right now, everybody is scheduled to leave Thursday. We cannot leave without passing a bill that gets to the President’s desk that he can sign. I’m still confident it can happen. The Senate has to pass their bill over, hopefully today, and maybe by Thursday we will take that up, that Senate bill. A bill that the President can sign that will actually solve the problem.”

“Democrats did come together with Republicans in the Senate. So there is a template. That bill passed out of committee 30 to 1, so Republicans and Democrats came together. This isn’t even talking about wall funding it’s talking about taking care of young kids who have serious health problems. These coyotes that bring them over in many cases, they are sexually abusing these young girls. Pelosi wouldn’t spend the money to take care of them. This bill has got to pass. The Senate bill at least addresses the problem and it’s bipartisan. The President said he would sign it. Let’s get that bill to his desk.”

“I don’t even know if they would put it in a movie because nobody would believe it was real. The very first pitch I’m out there just to wave around like, ‘Hey, look, Scalise made it back.’ Certainly wasn’t expecting to make any plays because I had no mobility. The very first batter, Raul Ruiz, a Democrat from California, cracks the ball to second base, and I said, ‘You have to be kidding.’ And at that point your instincts take over. I was able to back hand the ball and get it. I’m on my knees and I see him running down the first baseline. I said, ‘Now I’ve got to throw him out.’ I made the throw sure enough and we all just lost it.”