WASHINGTON, D.C.—House Republican Whip Steve Scalise (R-La.) joined Fox News Channel’s Fox and Friends to reflect on the tragic loss of Congressman-Elect Luke Letlow. Whip Scalise remembered Luke as a friend and highlighted his positive spirit and excitement to begin serving the people of Louisiana in Congress. Scalise offered his prayers to Luke’s wife, Julia, and their two young children during this incredibly difficult time. 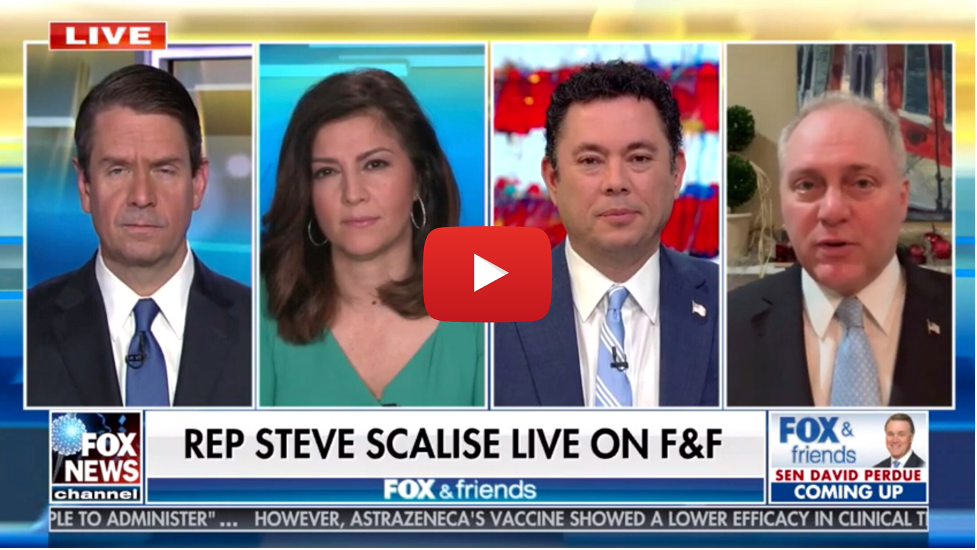 On the passing of Congressman-Elect Luke Letlow:

“It’s just such devastating news last night. I know I’ve been talking to Luke the last few days. He’s been fighting, he was battling in the hospital up in Shreveport and, you know, had taken a turn for the worse right before Christmas. It was going up and down. And, you know, it was just heartbreaking. I mean, Luke is a young guy, 41 years old, in great health, and looking forward to a bright future. He had just gotten elected to Congress three weeks ago. We would talk a lot about the things he wanted to do, the committees he wanted to get on. Boy, talk about a loss of someone with so much energy. He’s got a beautiful young family. I know my prayers are with Julia, his two young kids. You know, everything about this is just heart breaking. Our whole delegation is devastated. Luke is just, you know, one of those people that everybody liked and, boy, he was really looking forward to the opportunity to serve in Congress and just a tragic loss.”

“Well, first of all, I’m very encouraged that Mitch and the Senate are working on reforms to Section 230. This is a law that’s been abused by the Big Tech companies shielding themselves with legal protections while they go out and this was intended for any social media platform, it was a town square if you just let people post whatever their thoughts are, the company would be protected from liability. And yet some of these tech companies are censoring data. Primarily conservative data, by the way, where they now would be considered publishers. That was not the intent of Section 230. So, I think it’s very important that the Senate look at that. I hope they get something out.”

“Election reform as we’ve seen, I mean, look at all the different states that went against their own state laws that said how election day was supposed to work. And, yet, whether it was their Secretary of State or a Supreme Court in the state, making up a new law when the legislature framed a different law. We need some standards, especially when you think about election night. We ought to know in America what the results are on election night. Whoever wins or loses, look at a state like Florida, very large state, they were able to get their results in by 10:00 at night. Then you have other states – New York is still counting votes right now in a Congressional race. Claudia Tenney is up by about 25 votes and they’re still counting votes or finding ballots. I mean, that’s really what undermines public trust when, you know, it’s 3:00 in the morning and they kick everybody out of a room when you’re legally supposed to be able to watch what’s going on in that room and then you wake up the next morning and hundreds of thousands of votes swung a different direction. That’s what undermines public confidence. I hope they get that right and get a bill out that will address those problems that we saw.”

“Well, obviously you want to see what they come up with. If they come up with something that actually fixes those problems – these problems have been identified. Courts don’t like getting in the middle of that. But again, you go look at some of the state Supreme Courts, Pennsylvania, their law says a ballot that comes in after 8:00 on election night when the polls close, that shouldn’t be counted because the polls close at 8:00. By the way, other states do that, and their state law said that and yet [their] Supreme Court just said, ‘You know what? We’ll just let ballots come in for days later and selectively count what happens.’ That’s not what a fair system is about. You want to know what the rules are, play by the rules. But when somebody changes the rules in the middle of the game at halftime or something, it creates, again, it breeds a lot of distrust in the election that you still see right now. Millions of people have been asking these questions. I hope they’re able to get a bill out.”