WASHINGTON, D.C.—House Republican Whip Steve Scalise (R-La.) took to the House Floor to condemn Speaker Pelosi and House Democrats for failing to negotiate a bipartisan agreement on new COVID-19 relief legislation. Scalise blasted Democrats for moving forward with the Heroes Act 2.0 which has no chance of becoming law and puts a greater priority on unrelated liberal wish-list items than actually helping American families and businesses.

Whip Scalise called on Congress to reject Speaker Pelosi’s partisan messaging bill and instead proceed with the bipartisan discharge petition to provide immediate relief to families and small businesses by extending unused funds in the Paycheck Protection Program (PPP). 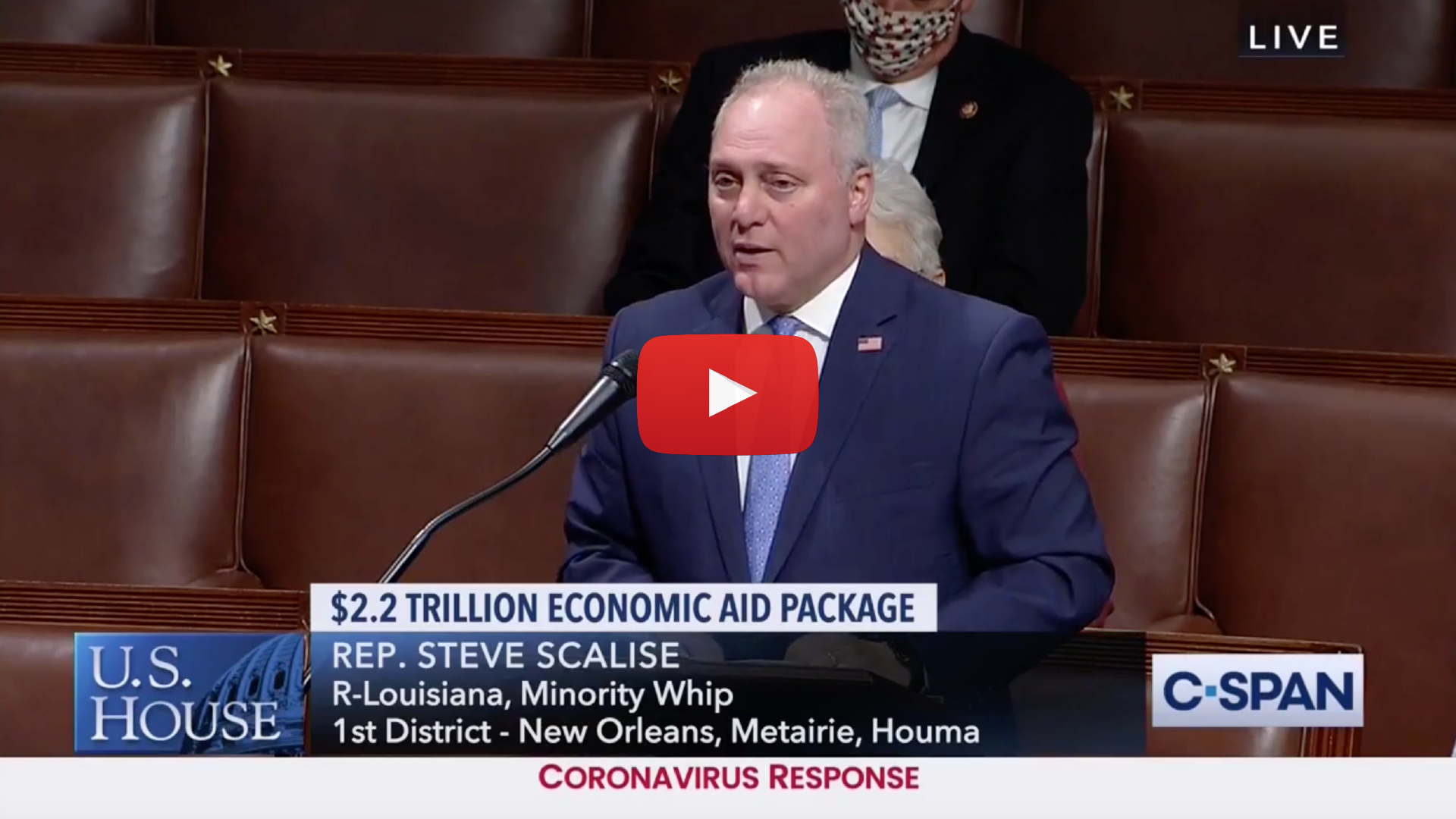 “I rise today in opposition to this partisan bill that’s not focused on helping families and small businesses. Everybody in this chamber knows that this bill is going nowhere because [Democrats] didn’t even work with Republicans to try to draft a proposal that could actually address the needs of families who are struggling.

“There is a bill already filed, at the door right over there, a bill that will help every small business renew the Paycheck Protection Program using existing money. There’s $138 billion frozen in an account that we unlock with Chabot’s bill. Congressman Chabot has a bill with the discharge petition that would actually, in a bipartisan way, help small businesses go for a second round of Paycheck Protection funding. And what do we get? Do we get today a bill that was brought together by both sides to solve this problem? No, we don’t.

“We have a bill that was drawn up basically using the old failed roadmap of the original Heroes Act. Now they had the Heroes Act – it passed in a partisan way. It was never going to go anywhere. Months ago, did they say, ‘Okay, let’s work with Republicans. Let’s work with the President?’ No, they didn’t.

“[Democrats] said, ‘Okay, we want to present a scaled down bill.’ So Mr. Speaker, when they scaled the bill down, did they cut the billions of dollars of funding to illegal immigrants that was in the original Heroes Act? No, they didn’t. Did they cut the hundreds of billions of dollars that go to failed states, states that had billion dollar deficits prior to COVID? No, they kept that money and in fact, if you look at the things that had nothing to do with COVID. For example, mandating that states that currently require a picture ID [to vote] have to remove that. Ballot harvesting, which we’ve seen in so many states leads to voter fraud. That’s what’s in the original Heroes Act, that still remains in this bill. What does that have to do with COVID relief?

“And so if you look, take the original bill. The original Heroes Act had $600 million for police funding. Community policing, things that have been proven effective to make our communities safer. That was in the original Heroes Act. When they decided to cut, again, they didn’t cut the billions for people here illegally, they still get cash payments if you’re here illegally. They cut the police – zeroed out $600 million – defunding the police at a time when our communities need help. This was the original bill – the $600 million is gone. That’s what they cut. They kept the [illegal immigrant] money, checks going to illegals.

“Everybody knows this bill is going nowhere because it’s a partisan hack job. If you look at a letter that was sent, just a few days ago to the Speaker by 23 Democrats. 23 Democrats sent the letter to [Speaker Pelosi] saying, ‘Passing a bipartisan COVID-19 relief package should be our number one priority in the coming days. It is our request that you continue to negotiate towards a bipartisan deal. Otherwise, a discharge petition is the only potential option for COVID-19 relief.’ That’s 23 Democrats. That’s enough people, if they go down, Mr. Speaker, right over there and sign that discharge petition it will bring that bipartisan relief package bill to the Floor. Helping small businesses.

“We already helped millions of small businesses stay afloat with the original Paycheck Protection Program. An incredibly bipartisan success story that we came together to pass. Over 50 million jobs were saved by that. But we know now, Mr. Speaker, some of those businesses are doing better, but some of those businesses are still struggling. In fact, dying on the vine. And this bill will give them relief. They can go for a second round of relief requests, PPP funding, with money that already exists. Not $2.2 trillion borrowed from China. Let’s pass a real bill, the Chabot bill. Let’s reject this partisan exercise.”