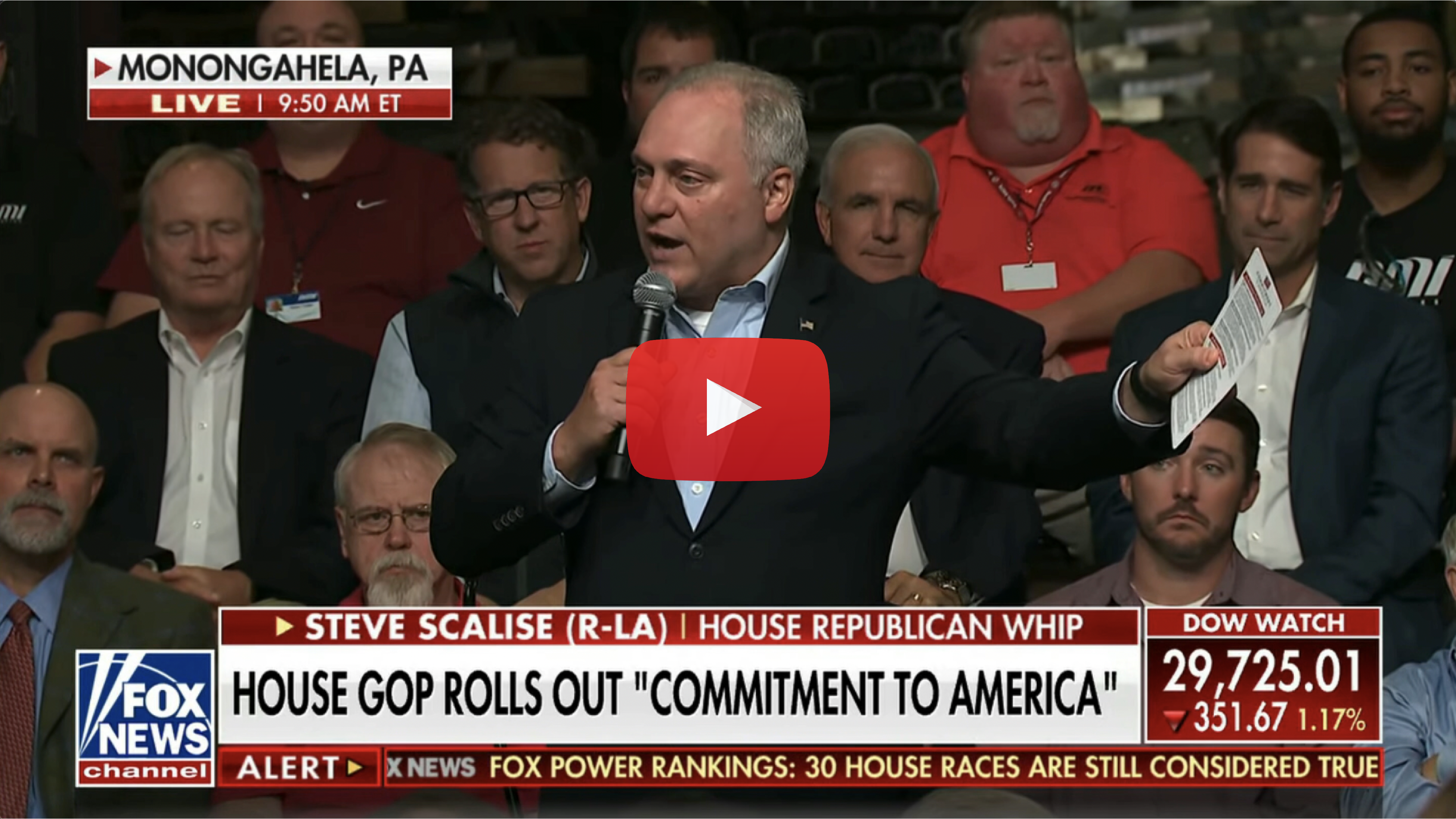 Click here or on the image above to view Whip Scalise’s remarks.
Whip Scalise’s remarks: “Thank you, [Leader McCarthy]. Thank you, DMI, for opening up this beautiful facility. It’s great to walk around and see Pittsburgh steel workers making real things in America. That’s what we want more of.“Obviously, the threats that we’ve seen over the last two years to the American Dream, to the ability for people to be able to think, ‘Maybe my kids can have a better opportunity than me.’ That is at risk right now, and that’s a risk because far-left policies have led to record spending. When you see every bill that comes out of Congress, not hundreds of billions but trillions of dollars of borrowed money, new taxes, [and] 87,000 IRS agents. “You know, in all my years of Congress, I’ve never had a single phone call from anybody saying, ‘Steve, please add more people to the IRS.’ If there [are] 87,000 people needed in America, it’s at the border to secure America’s border, not over at the IRS to go after small businesses and hardworking families.“So, we could have just sat back and said, ‘Look at how bad their policies have been. Give us the majority, and it’ll be different.’ That, to us, isn’t good enough. We wanted to lay out a bold conservative vision to show the country there’s hope again, there’s not just one direction that’s far-left, that’s big government socialism that’s wrecking this great country. There is a better way. “The ‘Commitment to America’ is going to show the country if you give us a Republican majority in the House, these are the things we will do. We will bring bills to the floor. We will have great debates to solve the problems that [President] Biden and [Speaker] Pelosi created.“You’re concerned about it inflation like us. We have a plan to reduce inflation. You’re concerned about high energy costs – not just at the pump – gas prices are too high. But this winter, I heard it’s going to be a little bit cold in Pittsburgh, Pennsylvania. We have a plan to lower energy costs and get us back not only to lower energy costs but energy independence. We shouldn’t be buying oil and natural gas from Russia, Iran, or Saudi Arabia. We can make it right here in America like you make steel in Pittsburgh.“That’s what we’re laying out – how to do it. How to secure America’s border. It was not that long ago that we had a secure American border, and it’s not like we have to reinvent the wheel. But they broke the wheel. We’re here to fix it, and we have a plan to do just that. And we’re proud to write it down on paper. And if [President] Biden doesn’t like this plan, I think it’s about time [President] Biden has to be asked a question, ‘Mr. President, if there’s a bill put on your desk to lower energy costs, will you sign it or veto it?’ And if you veto it, I think now the country understands what’s at stake.“We’re going to give him that dilemma. We’re going to give him that opportunity to wake up like we do to fight for the American people, not to make things harder for the American people.“That’s what the ‘Commitment to America’ is all about – to show people that once again, there can be hope, there can be opportunity. So that when you wake up, it’s not just to go to work for yourself. It’s to go to work to make sure your kids can have a better future, and there’s nowhere else in the world where that opportunity exists. And if they ruin that opportunity in America, there is no backup plan.“We cannot let this great nation fall. We’re not going to let this great nation fall. America can rise up again, and you’re going to see that with this ‘Commitment to America.’“I appreciate the opportunity to come and present it here with all of my colleagues and the leadership of Kevin McCarthy, and we’ve got a great team. You’re going to see a lot of my colleagues talking about the different parts of this we put work into, but our Conference Chair, who leads that effort and helping us all stay [focused on] what this is all about, is the congresswoman from New York, Elise Stefanik.”