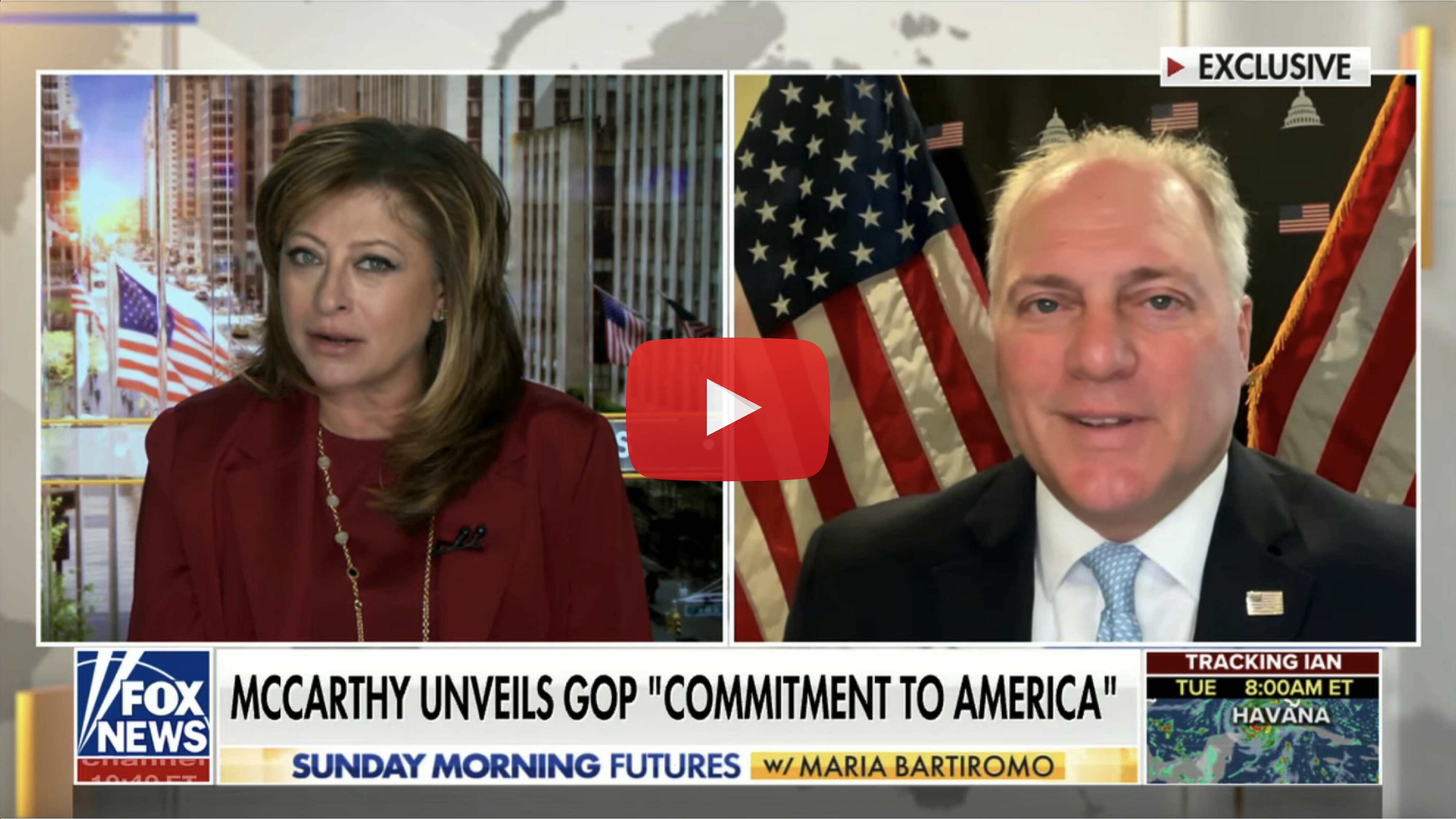 On House Republicans’ plan to reverse Democrats’ self-made crises:“I think what’s the most important about the ‘Commitment to America’ is, we’re showing the country that there can be a better way. We don’t have to have this as the new normal, where inflation is out of control, energy costs are unaffordable, [and] we have a border that’s so wide open that thousands of people come across every day. People don’t even feel safe in their own neighborhoods, Maria, and Democrats have gotten us here with their far-left socialist policies.“So, the ‘Commitment to America’ is just showing people, if you elect Republicans to replace these Democrats who have been voting for socialism, we can actually confront these problems. And we’re showing the country the bills we would bring to a Republican House Floor to address all the problems that [President] Biden and [Speaker] Pelosi and their far-left socialist friends have created.”On the need for accountability in government: “You’re going to see a very robust oversight and investigation, [and] accountability program by our committees. Right now, we have been asking a lot of those questions, and we can’t get the answers to basic things, like, ‘How many people have come across our border illegally? Where have they been sent? How many are on the Terrorist Watch List? Where did COVID originate from?’“They won’t let us have hearings on any of that, but if we’re in the majority, we can have not only hearings on all of it but subpoena people who have the answers and just refuse to comply right now. That will change on January 3rd if we are able to get the majority on November 8th. So, the public has a real role to play here. Go out and vote for people who support this commitment, not just in the House. But also, Maria, in the Senate, so that we can get a Republican Senate to do this as well.”On voters rejecting big government socialism in Europe:“You and I both share a love for our Italian heritage. By the way, congratulations. I know in a few weeks, you’re getting a very great national honor from the National Italian American Federation. So, congrats and well-earned on that.“But, if you see what’s happening in Europe, they’re actually going against all this big government socialism. They wrecked their economies, just like [President] Biden has started to wreck ours, by going towards this Green New Deal, shutting off fossil fuels, [and] becoming more dependent on countries like Russia.“They have seen the fallacy of it. You saw it with [Prime Minister] Truss in Britain, now [the candidacy of Giorgia] Meloni, hopefully, in Italy, where the voters, the people in these communities, are getting crushed. Low-income families, because of the high costs, are rising up against their far-left socialist governments.“I think you’re going to see that in America as well. But it’s interesting to see that Europe is leading the way by throwing out socialists with conservatives, and great, bold conservative women, like both Meloni and [Prime Minister] Truss. I think it’s exciting to see it in Europe. We need to bring that kind of conservatism back to the United States to stand up against what the big government socialists have done to ruin our economy and raise costs for middle-class families. I think that’s going to happen [on] November 8th.”On Speaker Pelosi and President Biden attacking House Republicans’ “Commitment to America” agenda:“It was interesting that [Speaker] Pelosi and [President] Biden both attacked our ‘Commitment to America.’ It shows they are threatened by it. But if they think this is extreme to lower energy costs and secure America’s border and reduce inflation, it shows you they’re out of touch.”