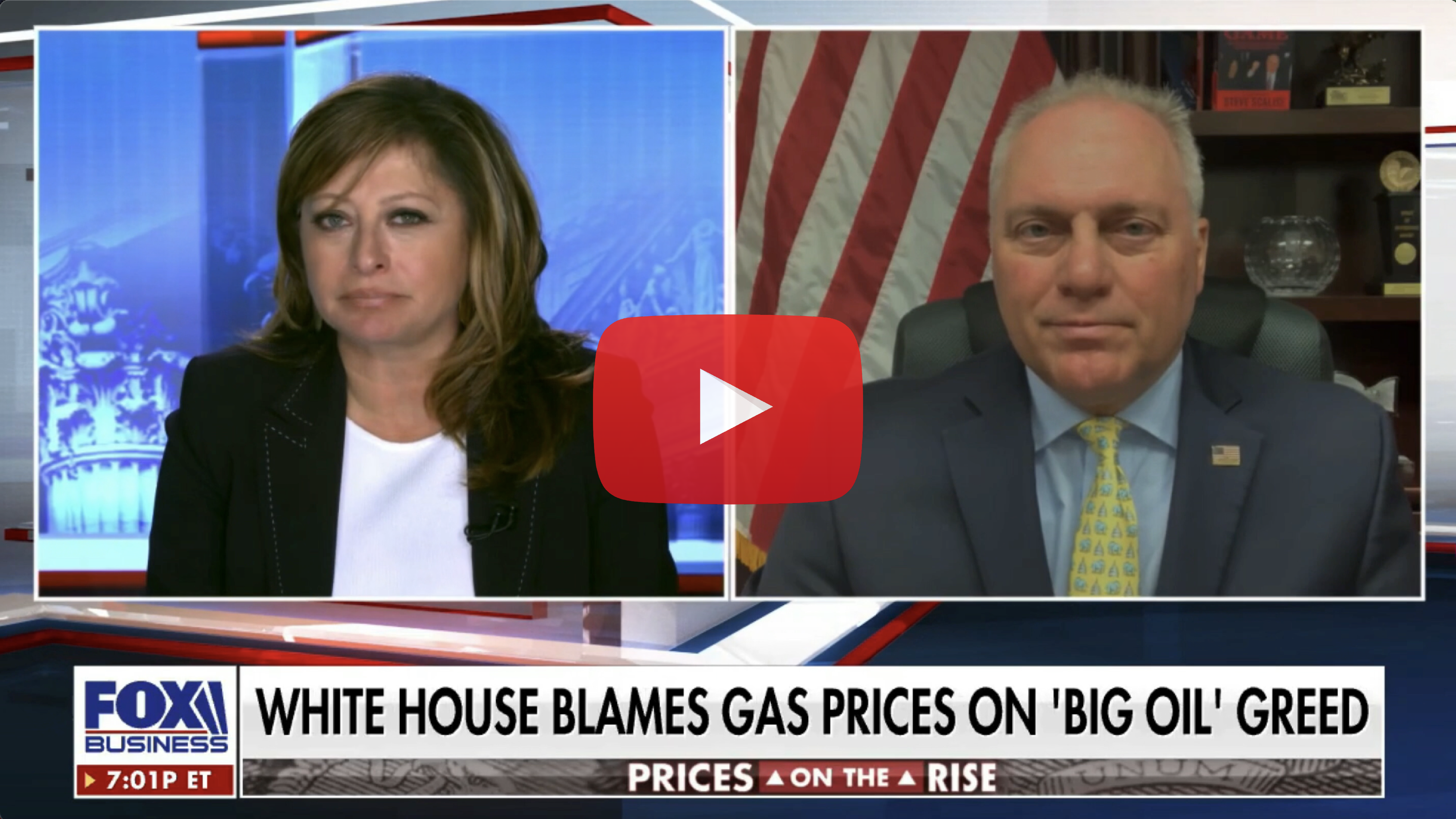 Click here or on the image above to watch the interview.
On the Biden White House refusing to take responsibility for creating record-high gas prices: “President Biden is really good at trying to blame everybody else. And if you just unpack [White House Press Secretary Karine Jean-Pierre’s] statement, she blamed multiple different people in the same sentence about who to blame for inflation, none of which include her boss. It’s Republicans. It’s the war. It’s Putin. My goodness. “I mean, everybody knows what’s going on. Joe Biden came out and said he [wanted] to attack American energy as a candidate for President. He’s carried out policies to attack American energy. Prices are through the roof. Families are angry, and they’re mad at the President, and he won’t change his tune. So, he’s trying to blame other people. And nobody is buying it.”On Democrats pressuring the private sector to adopt their extreme climate policies:“You’re seeing this where the [Securities and Exchange Commission], the [Consumer Financial Protection Bureau], [the Treasury Department], you’ve got all of these agencies directed by President Biden to go after industries – to go after the energy industry – through things like ESG where they’re trying to pressure companies to say, ‘Hey, what’s the carbon footprint of everything you’re doing in America?’ Of course, they exempt foreign countries.“You know, President Biden’s going to fly to Saudi Arabia – 5,700 miles to beg them to produce more oil. By the way, what’s the carbon footprint of that trip? There aren’t solar panels on Air Force One. It’s jet fuel. And yet, he could stay right here in America, pick up the phone and say, ‘Would you produce more energy in America?’ And they would say yes, but he won’t do it.“He won’t let us produce more energy in America as they talk about this cult religion. Everything is climate change [and] global warming. They keep changing the name of it. It all ends up in higher prices for families. And countries like China, countries like India, countries like Saudi Arabia, who don’t have the good environmental standards we do, are producing more of our goods, more of our energy at higher carbon emissions. It’s the nuttiest thing I’ve ever seen. They’re increasing carbon emissions abroad while shutting things down in America and crushing our economy and crushing middle class families.”On House Republicans’ plan to combat inflation:“The first thing is [to] stop the madness. You know, all these multi-trillion dollar bills where they’re spending money to pay people not to work, to bail out failed states, to force people – even under what they called infrastructure – you can only build the road if you use union workers which jacks up the cost or you have to follow all these new regulations that jack up the cost and don’t achieve anything real. That’s what is driving up inflation, and people are fed up with it.“So, stop that and start reversing it, and let’s get back to the things that work. We had a great energy policy where we were paying less than $2 a gallon. Let’s go back to those policies. Let’s secure the border. These are the kinds of things we can do. And we will be rolling out this agenda over the summer – the Commitment to America – to show people what we would do if a Republican majority was in place to counter all of these disasters and crises that [President] Biden has created.”On President Biden’s disastrous open-border policies:“It’s an alarming crisis that was self-created by [President] Biden. Again, we had a secure border under President Trump, and [President] Biden came in and deliberately reversed all those things that worked. [He] got rid of ‘Remain in Mexico,’ canceled construction of the wall, [and] sent the message out to South and Central America that the border’s open. And they didn’t just come from there. We’re seeing [illegal immigrants from] over 160 different countries are coming across our southern border.“[With] Afghanistan, he turned it over to a terrorist organization. They are trying to infiltrate our southern border. There was just an attempt on [President] Bush’s life. And one of the things that they found in the intelligence is they were trying to infiltrate – some of the people that were going to try to carry out this execution of a former President because the border is open along Mexico. And they were going to bring some of the people in there. Thank God they stopped it. But how many more things like that are we seeing? How many, as you pointed out, people on the Terrorist Watch List who’ve already come across our southern border when [President] Biden opened it up?“This has to stop. It’s a major crisis. The fentanyl, the drugs that are killing people all across the country are coming through the southern border. And it’s no wonder that Mayra Flores became the first Republican to be elected over there on that border with Texas and Mexico in 100 years. She ran as the first Mexican-born woman to come into Congress. [This is the] first time that a Republican won, and she ran on border security and cleaning up this mess that [President] Biden created.”