WASHINGTON, D.C.—House Republican Whip Steve Scalise (R-La.) joined Fox News Channel’s Fox Reports with John Roberts and Sandra Smith to emphasize that Congress should be focused on helping struggling workers, families, and small businesses—not the impeachment trial of a president who is already out of office. Whip Scalise emphasized that energy workers who just had their livelihoods decimated by President Biden’s executive orders aren’t focused on another impeachment distraction, and want Congress to spend time actually addressing the issues that affect their lives. 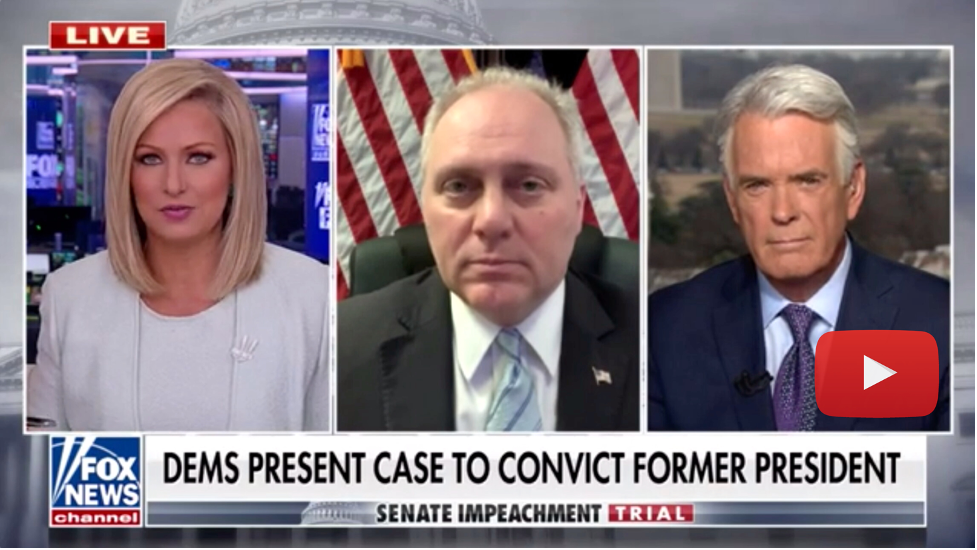 Click here or on the image above to watch the interview.
On Democrats’ misguided priorities:
“If you go back to yesterday, as well as today, you know, it started with this Hollywood production that was very spliced and very selective in showing different things. At the end of the day, the question is, as people came into the Capitol on January 6th, which we all decry, who’s held accountable? And what I would suggest, is it’s those people who actually violated the law, broke into the Capitol, beat police up, murdered a police officer. Over 120 of them have been arrested and should be. You know, but the question is, what is the standard? How many times have we seen Democrat officials saying things that incited things? Not one of them is being impeached for things that they said. And many of them were inciting actual violence against other people that was carried out. The question, again, goes back to this. Donald Trump is gone from office; they’re impeaching and removing him from what? He’s already gone. This is clearly something to just continue the impeachment drum beat that happened before Donald Trump took the oath of office. Remember, in his first weeks after walking into the Oval Office in 2017 they already had articles of impeachment filed. Then they had the Russia hoax which it turned out all of the things that they suggested didn’t even happen, and they impeached him for that anyway. Now that he’s gone from office, they’re still infatuated with impeachment.

“Why isn’t the Senate, right now, spending their time trying to help businesses get back on their feet, trying to help schools safely reopen when all the science says that not only you can open schools, but it’s ruining these kids’ futures not to have them back in the classrooms. I was in South Louisiana the last few days meeting with some of the workers whose jobs and careers are being decimated by the Biden Administration policies on energy. They’re not watching this trial. They’re trying to fight for this future. They don’t have a solar job to go to. Their career that many cases is third generation, is being eviscerated by Biden’s policies and they want to distract you with yet another impeachment.”

“You know, look, again the evidence has not been laid out that this is President Trump who should be the one held accountable for breaking into the Capitol. The people who have actually been arrested [should be held accountable]. And, by the way, go through the summer where they were literally burning down cities, murdering police officers in droves, murdering innocent civilians in droves. You had Democrat elected officials offering to bail them out of jail, encouraging them to keep doing it.”

“All of us said back on January 6th when all of this was going on, we wished more was done to stop it across the board. But again, we decry the loss of Officer Sicknick. I went to his service. I’ve spoken to his family. You know, where were all these Democrat officials who are yelling and screaming today, where were they during the summer? Where were they when cops were being murdered in cities all across America where they were encouraging that to continue? So, let’s call it out everywhere it happens. There’s no place for political violence whether it comes from the left or the right.”