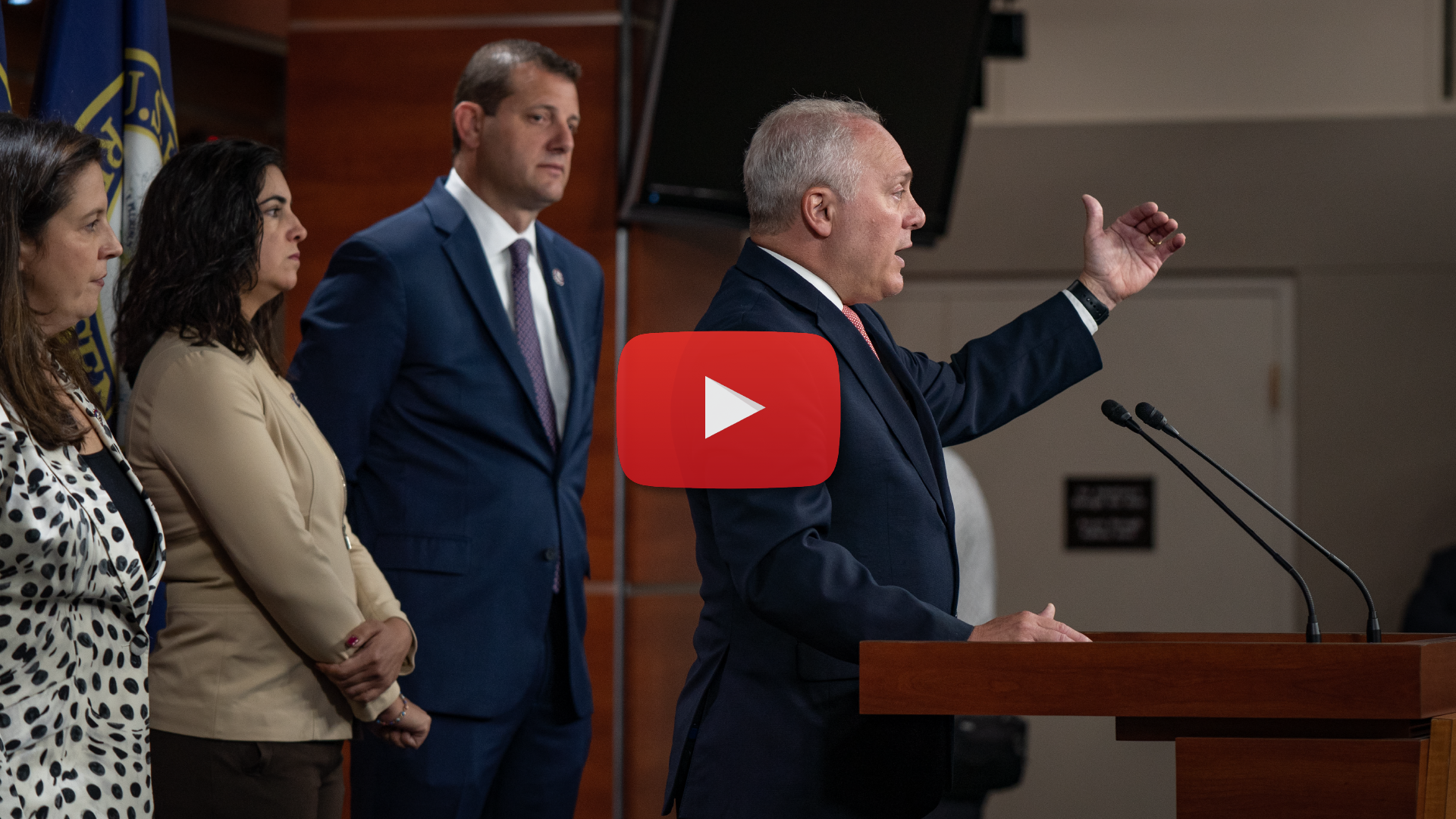 Click here or on the image above to view Whip Scalise’s remarks.
On President Biden’s inflation party at the White House:“President Biden and Speaker Pelosi continue to show how out of touch and tone deaf they are by throwing a party yesterday at the White House to celebrate [their inflation legislation] at the exact same time that the market is crashing because of inflation that President Biden and Speaker Pelosi created! “You would think they would be paying attention to the struggle that families are facing, and you would think that they would bring us back here to Washington to put bills on the floor to fix these problems they created. But unfortunately, that’s not what we’re doing. Yet again, another week of no bills on the floor to lower gas prices, to lower costs that are crushing hardworking families, to do anything to secure the border.”On Vice President Harris falsely claiming that the southern border is secure:“You talk about being tone deaf and out of touch, [Vice President] Harris over the weekend said that the border is secure. Maybe she says that because she hasn’t been to the border to see how out of control it is because they’ve opened up the border.“And as [Congresswoman Malliotakis] talked about, this is creating problems for families all across the country. We had over 100,000 deaths of young people last year from fentanyl and other drug overdoses because the border is open.“Most of those drugs are being made in China and brought across our open southern border. Sorry, [Vice President Harris], the border is not secure, and in fact, it’s so open that over 100,000 Americans died last year. [There are] young people that aren’t going to school today, aren’t going home to their families for dinner because [the Biden Administration] won’t secure the southern border.”On House Republicans’ upcoming bold conservative agenda:“So, when you look at all of these problems, as I’ve gone around the country, not only throughout my district in South Louisiana but so many other districts over the last month, you hear the same pleas from families saying, ‘We wish Washington was actually addressing these problems.’“Well, the good news is we have a plan, and help will be on the way. We’re going to be rolling out our ‘Commitment to America’ in just a few days to show the country how a Republican majority would actually solve these problems that President Biden and [Speaker] Pelosi and the far-left have created.”On Democrats’ disastrous energy policies straining our electric grid: “You know, just look at California, and as [Congressman Valadao] talked about the problems they’re dealing with. You had California, just a few weeks ago, pass a law banning oil and gas-produced cars. You can’t drive a car that’s fueled by fossil fuels in California in a few years because they want everybody to have to go to electric cars.“And the same week they actually came out – [Governor] Newsom said you can’t plug your electric car into the house plug to charge it up because their grid is so unstable, that they can’t even charge electric cars. So, they’re going to make you use electric cars. They’re going ban gasoline-powered cars. At the same time, they’re telling you [that] you can’t plug your car into your household electric socket because they don’t have energy.“Where do they think energy comes from? You’re not plugging your car into a tree. You need some stable energy sources, and a lot of that would be fossil fuels, but they’re against fossil fuels here in America. They’re okay with getting it from Russia and other tyrannical dictators.On Democrats refusing to work with Republicans to reverse their self-made crises:“So, we have a plan to solve these problems. We’re going to continue pushing for them here. I wish we had bills on the floor to address those here. We’ve laid out to Speaker Pelosi what those bills are that would lower gas prices, that would provide a stable energy supply, that would lower inflation, that would secure our border. “But they won’t bring any of those bills to the House Floor because they want to continue doubling down on their inflation-ridden policies, raising taxes, raising spending to the tune of hundreds of billions of dollars, hiring 87,000 IRS agents to go after lower-income people.”On President Biden breaking his promise not to raise taxes on families making less than $400,000:“Yes, the CBO confirmed it after they passed the bill, over $20 billion in new taxes that are going to be paid for by people making less than $400,000 a year, which breaks [President] Biden’s pledge.“He knew it before he signed the bill, and he signed the bill anyway, and they held a party at the White House yesterday celebrating the fact that they’re raising taxes on lower-income families to give special interest giveaways to their rich friends, all while the market is collapsing.“That’s how out of touch they are. Republicans have a plan to solve these problems, and we’re going to continue pushing for them.”