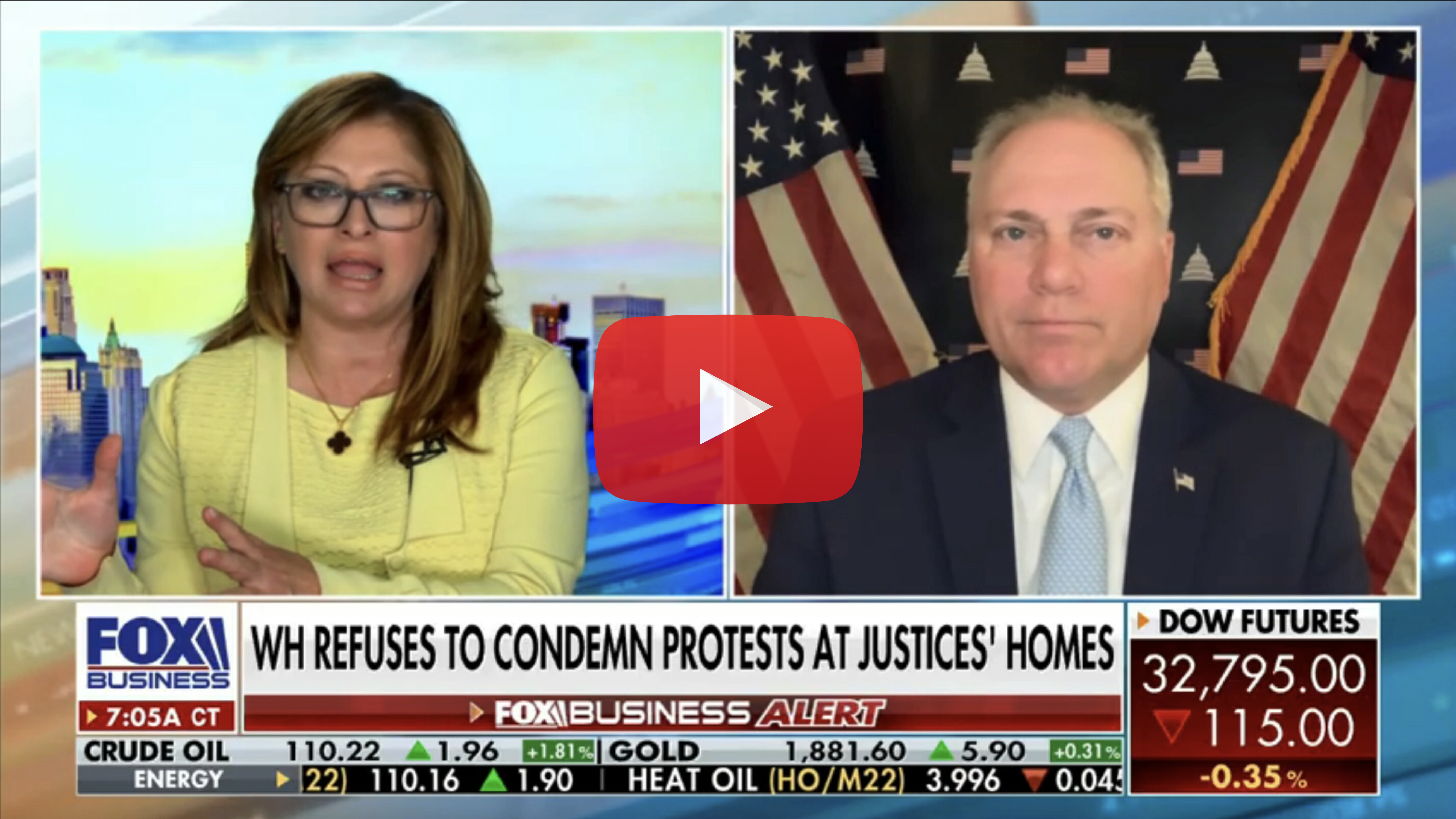 Click here or on the image above to watch the interview.
On far-left protestors attempting to intimidate Supreme Court justices:“Maria, there [are] a number of alarming pieces. The first is that the White House still won’t even condemn the leak. And I’m glad that there’s an investigation. Whoever did this should be disbarred, if they’re an attorney, for life and some other consequences need to happen too.“But this idea that you should just keep this open season on [Supreme Court] justices and allow for them to be intimidated, and look [Senate Majority Leader] Schumer, remember during the abortion debate not long ago, [Senate Majority Leader] Schumer gave a speech, and he said, and he specifically talked to [Justice] Gorsuch and [Justice] Kavanaugh, mentioning them by name, saying, ‘You won’t know what’s going to hit you.’ Saying some other inflammatory things as well.“Again, where’s the White House condemning those kinds of things? This is a situation where first of all, they need to go and investigate and find out who did this. But they should fast forward the release of the document. The idea just leaving it hanging out there now that it’s been leaked, the Supreme Court [has] actually acknowledged that this was the document being floated around, just release the document. Take that ability to intimidate the Supreme Court off the table. And that’s something I hope they consider.”On Democrats’ abortion extremism:“Clearly, [Democrats are] floundering around looking for a message. They don’t want to run on the issues that are affecting hardworking families. Inflation is still going to be the driving issue, high gas prices, the border crisis, [and] parental involvement in kids’ education. Those are all things that House Republicans have strong positions on, to fix those, and [side] with the American people.“But think about abortion, if this is where they think they’re going to go. The Democrat position on abortion right now, [Speaker] Pelosi telegraphed it, so did [Senate Majority Leader] Schumer, is to have an abortion on demand mandated by federal law with taxpayers footing the bill. That’s what they’re talking about right now. That’s the extreme position. “And then go look at states like New York with or without this decision. New York can still murder a baby after it’s born alive outside the woman and call it abortion. That’s murder. Yet, it’s legal in the state of New York. That’s the extreme position if that’s where they want to go. And I think you’re going to find most Americans don’t want this unlimited abortion on demand paid for by taxpayers, which is the Democrats’ position in Washington.”On Democrats’ extreme policies hurting the American people: “It’s a powerful story because it affects people every single day. And this is where Washington Democrats are completely out of touch with the hardworking families in this country, from President Biden to Speaker Pelosi on down. They don’t care about inflation. They don’t care about high gas prices because their policies created this, and they’re doubling down.“They’re not opening up drilling in America to lower gas prices and make Putin irrelevant on the world stage for oil. They’re not doing the things you would have to do to correct the supply chain, to stop the spending in Washington that’s driving high prices on everything you buy at the grocery store. Everything you buy, anywhere you go.“They’re surely not trying to fix the border crisis because [President] Biden created it by executive action – getting rid of ‘Remain in Mexico,’ [the] Northern Triangle agreements, stopping the building of the wall, all those things were working to give a secure border that [President] Biden had when he walked into office. Today, millions of people – [the Biden Administration doesn’t] even know how many people on the Terrorist Watch List have come into America, but they’re confirming it’s in the dozens. That’s alarming too.“That’s what people are angry about, Maria, and Democrats are only trying to make it worse. So, this isn’t going to help them. But again, they’re in search – their party [is] meandering around for a message – because they don’t want to fix the problems they created that are hurting families in America.”On China taking advantage of President Biden’s open-door policies to smuggle drugs into the United States:“This administration has been completely silent on holding China accountable for anything. Not even a single hearing on the origins of COVID, let alone on so many other things that China is doing. Look, you’ve got people from the [Chinese Communist Party] coming. You’ve got people from Russia coming. Over 150 countries are represented coming across our southern border. So, it’s not just South and Central America. It’s all across the world. And frankly, a lot of people that you wouldn’t let into your country if you were checking.“You know, why does [President] Biden want an open border and want to make America less secure? Because that’s what he’s doing. What we’re going to do is keep fighting and highlighting this issue, trying to address it.“We’re in the minority right now in the House, but we’ve had over 150 Republican Members of Congress go to the southern border and then go back home and talk about it in our districts. So, I think everybody in the country recognizes now why this is a problem, as you mentioned. “Fentanyl, mostly made by China, but all [are] coming across our southern border. Last year, the single [largest] killer of young people in America was fentanyl, and [President] Biden won’t do anything about it.”On President Biden irresponsibly claiming that Trump supporters are the most dangerous political organization in American history:“That’s embarrassing. And think about what [President] Biden said when he was a candidate. He said he was going to represent all [of] the people in the country, including those who voted against him. He’s targeting those who voted against him. And remember what he did to parents who got involved in their kids’ education? Called them domestic terrorists. Shameful.”