In addition, Whip Scalise blasted the Biden Administration’s reported plan to send $450,000 payments to illegal immigrants and pointed out that this would incentivize more migrants to unlawfully enter the United States. Whip Scalise also called out President Biden and Congressional Democrats for their partisan tactics and for rushing a vote on their radical agenda in the dark of night. 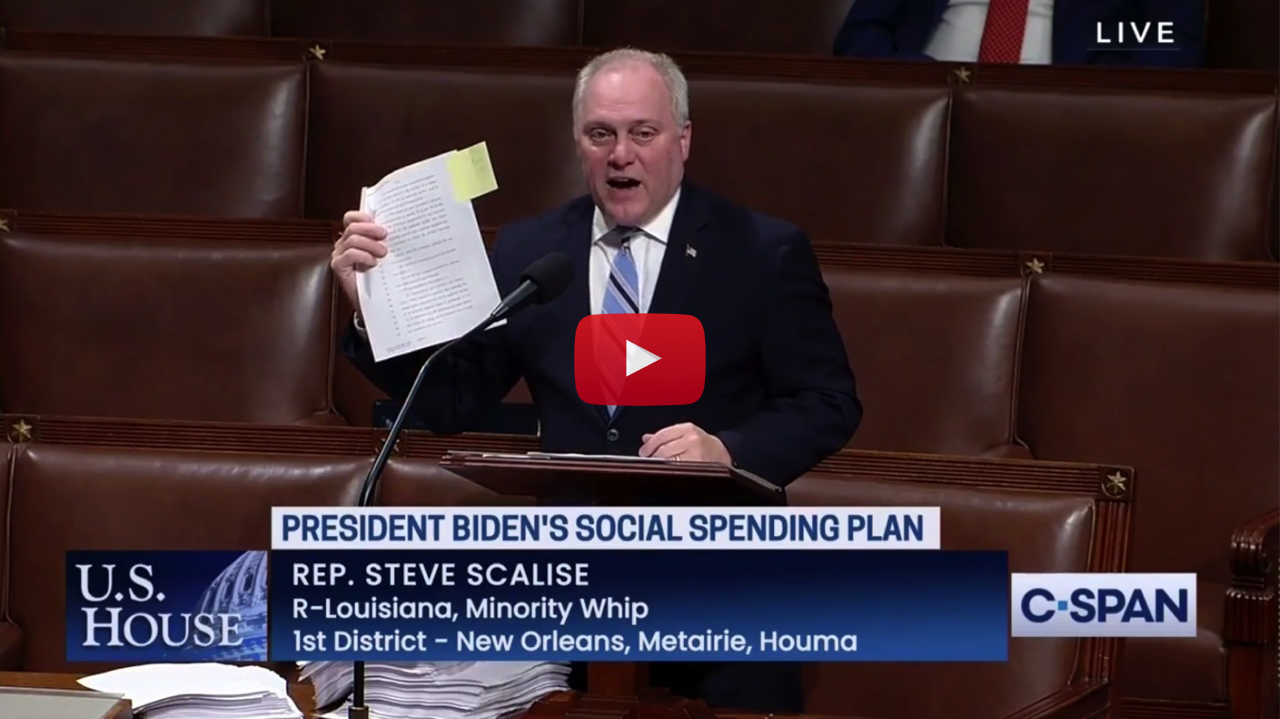 “I rise in opposition to the rule, but specifically, against this massive, multi-trillion-dollar tax-and-spend bill. We just got the text last night, over [2,100] pages. And as we’ve been combing through, I’d like to point out a few pieces in this bill.

“Let’s start with a natural gas tax. President Biden promised that anyone who makes less than $400,000 a year won’t spend a dime, will not pay a dime in new taxes. He even whispers it into the microphone. The only problem is he breaks the promise right here in the bill. A tax that, according to the American Gas Association, will increase household electricity rates by 30 percent. And, by the way, that’s low-income families that pay that tax the hardest. [A] broken promise by President Biden right there.

“Then, you go down, and you look at amnesty. It’s been talked about. Millions of additional people will get amnesty in this bill. And it comes at a time where President Biden is negotiating – initially, he said he wasn’t and then the White House had to go back up and say the Justice Department is negotiating – half a million-dollar checks to people who came across our border illegally, and then they’re going to give amnesty to millions [of] more people. Estimates are seven million more people. Can you imagine the flood that will come over when they hear that you can get half a million dollars a person if President Biden gets his way?

“Then you go down the line. There’s more, unfortunately. Let’s look at, we’ll comb through, IRS agents! How many of us have our phones ringing off the hooks with people calling, saying, ‘Please add 87,000 more IRS agents to the rolls’? Not one of us has probably gotten that call. Yet, they put it in the bill. They call this ‘infrastructure.’ They call this ‘equity.’ Whatever they want to call it, it’s an army of IRS agents that are going to come for your bank account.

“They’re going to be combing through your bank account, and why? Because they have to generate hundreds of billions of dollars to spend on more inflation-inducing spending. That’s right. According to [the Wharton School of Business at the University of Pennsylvania], you’re going to have over $4 trillion of spending with $1.5 trillion of new taxes. By the way, that’s $2.5 trillion of additional debt even though the President says there’s no cost. No cost, just $2.5 trillion of debt. But, these IRS agents are going to have to account for over $200 billion to find money from your checking accounts.

“That’s what they’re trying to do at [the] dark of night. We started the morning at 8:00 AM. We’re here after 9:00 PM starting to get into the details of this bill. No wonder they don’t want a CBO score. No wonder they want to do this by [the] dark of night. This is going to induce more inflation that’s hurting families all across America. Listen to what the voters of Virginia said, ‘Stop this [madness].’ Defeat this bill. I yield back the balance of my time.”