WASHINGTON, D.C. — House Republican Whip Steve Scalise (R-La.) joined Fox News Channel’s Fox & Friends Weekend this morning to discuss how Democrats and the mainstream media are using the January 6th primetime hearings to distract from the issues that are hurting the American people, like soaring inflation, skyrocketing gas prices, surging crime, and migrants unlawfully entering the United States. Whip Scalise urged President Biden to take responsibility for his self-made crises that are wreaking havoc on families, workers, and small businesses and previewed House Republicans’ plan to reverse Democrats’ big government socialist agenda. Additionally, Whip Scalise called out Speaker Pelosi for preventing an investigation into whether or not she turned down help from the National Guard and law enforcement agencies to secure the U.S. Capitol ahead of January 6th. 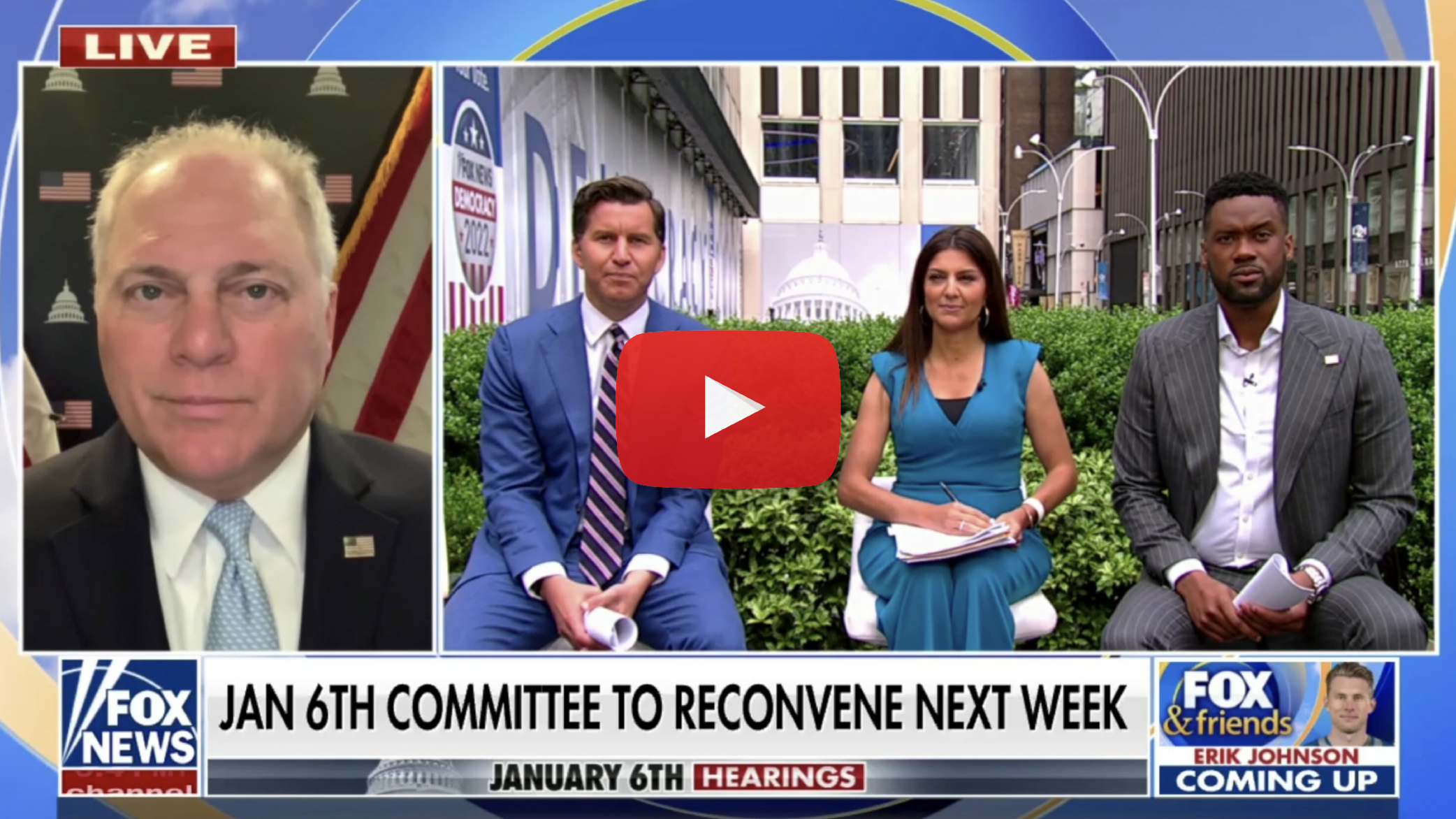 Click here or on the image above to watch the interview.
On Democrats politicizing January 6th and ignoring their self-made crises:“Well, I think like most of America, who seemed to tune out that hearing once it got about two minutes into them droning on about just hatred of [President] Trump, not about any kind of new news. I think it showed everybody in America that wasn’t already aware that this is just a political witch hunt.“You know, most Americans that I talked to they go, ‘Where are the hearings during primetime on inflation, on high gas prices on the border crisis?’ Why doesn’t [Speaker] Pelosi care about regular Americans? They only care about attacking their political opponents and their hatred of [President] Trump.“It seems like every day, that’s all they care about. When Americans are struggling because of the far-left socialist policies of [President] Biden and Speaker Pelosi and all of her minions who vote right down the line for big government socialism.”On Democrats’ misplaced priorities: “When you look at where most Americans are, they’re angry about these policies. They know where it’s being caused. I mean, [President] Biden keeps trying to blame everybody under the sun – it’s Russia, it’s oil companies. Yesterday, [he was] blaming trucking companies.“You know, he only wants to blame [the] American people and American companies. He doesn’t want to look in the mirror and blame himself for what he’s done to destroy so many fabrics of this country and to raise prices on families. They know he did it. And whether or not he’s recognizing that or [is] willing to admit it, it doesn’t matter.“I think the voters have already figured it out, and they just want somebody who’s going to fix it, which is what Republicans are going to be laying out over the next few months is the things that we will do if we get the majority to actually confront and fix these problems – how to lower gas prices, how to secure the border, how to address inflation, how to get parents more involved in their kids’ education, and how to control this runaway crime that we’re seeing in cities all across America, where Democrats defunded the police and elected these [District Attorneys] that are letting criminals out of jail committing more crimes. That’s what we’re going to be focused on. Clearly, Speaker Pelosi and her Democrat allies are not concerned about those problems.”On the lack of an investigation into the security failures leading up to January 6th:“Why did [Speaker] Pelosi take off the table in these hearings a look into whether or not she turned down help from National Guard and others to harden up the Capitol well in advance before January 6th, when there were signs that there would be a lot of people coming? “She, supposedly, was presented with other alternatives and turned it down. She won’t let the January 6th Commission look into the things that she may have played a role in [weakening] her posture at the Capitol.“So again, it just shows you it’s all politics and all about going after her political enemies. Surely not looking objectively at other things that may have played a role.”On the former President of ABC News helping produce the January 6th Committee’s hearings:“They hired a Hollywood producer to make this documentary, whatever it is, you want to call it.”