WASHINGTON, D.C.—House Republican Whip Steve Scalise (R-La.) joined Fox News Channel’s Bill Hemmer Reports to discuss how Speaker Pelosi and the Democrats are the only ones standing between American small businesses and COVID relief. Whip Scalise blasted Speaker Pelosi for using her House Majority to vote on a pot legalization bill instead of working with Republicans to provide targeted relief for American families suffering from the impacts of the COVID-19 pandemic. 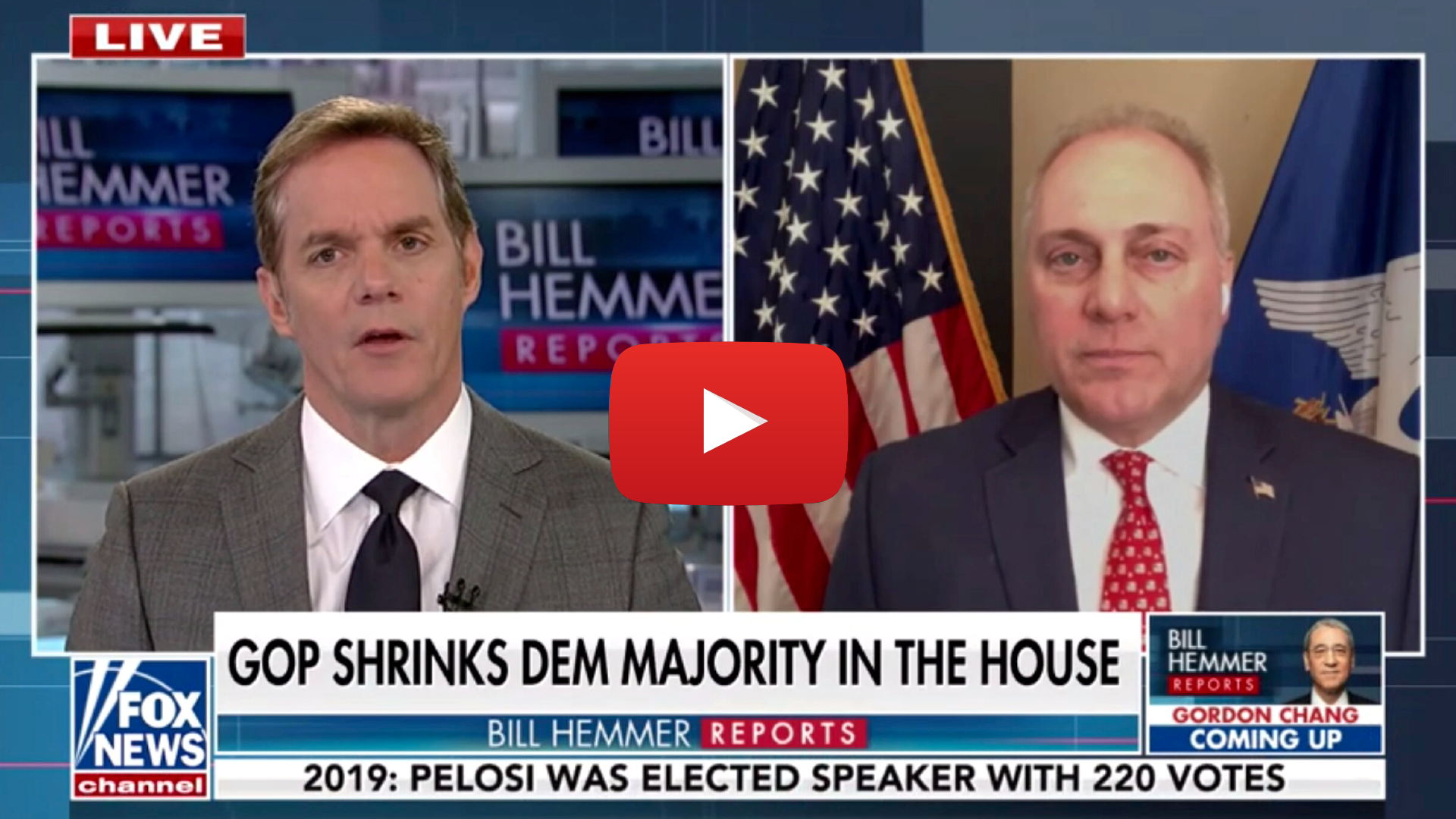 On voters’ rejection of Democrats’ shift to the socialist left:

“[Republicans] had some great wins. We flipped a lot of seats from Democrat to Republican. Mariannette Miller-Meeks is one of those great new members. 6 vote margin out of about 300,000 votes cast. She’s going to be great, like [Claudia Tenney]. I think in the end, Claudia is going to win. But, you know, it’s just bizarre that they keep finding ballots mysteriously and just enough to flip the seat back to Democrats. That smells fishy and I think people are rightfully watching that as well. But in the end when you look, all the experts in Washington were predicting we would lose at least 12 Republican seats. Instead, we’re probably going to gain at least 12. That’s roughly a 25-vote swing.”

“You know, I think there’s a lot of questions being raised about the methodology of some of these pollsters in Washington. But also, the so-called experts, the elites that said, ‘Oh you know, Pelosi is going to get another dozen seats.’ Pelosi herself was saying that and now she’s answering tough questions because instead they lost about 12 seats. [It’s] because we had great candidates first of all. But I tell you what, Bill, the voters of this country rejected socialism and we confronted it head on. All of these Democrats that embraced the defund the police movement and then when they realized the public didn’t like it, they tried to walk away from it but they were out there in those marches in many cases, embracing the idea of defunding the police and people don’t want that in their communities and we took them on.”

On Speaker Pelosi using her House Majority to vote on pot legalization instead of a COVID relief package:

“I rate that as President Trump putting his foot down and saying, ‘I want to help small businesses and families.’ We’re not going to bail out failed states, we’re not going to do some of the things like the Green New Deal that they were trying to do in these bills. Let’s focus on helping families who are struggling and that’s where the focus needs to be. Like I said, there’s a bill that would get huge bipartisan support that’s already waiting that Pelosi won’t bring to the table. Hopefully we get something done soon. These businesses need help. Unfortunately, some of these governors who tell the businesses to shut down but then they themselves are out there hypocritically doing the very things that they’re telling you not to do. I think people are watching and are fed up with that. But in the meantime, let’s help those small businesses and those families who are struggling.”

“I want to fight for those small businesses. And like I said, there are a lot of Democrats that do, they just won’t stand up to Pelosi. If Pelosi put that bill on the [House Floor], the Steve Chabot bill is a great example of a bill that would get 400 plus votes, but Pelosi won’t even bring it up, and it would help every small business in this country that’s still struggling. Using money that’s already sitting there. $137 billion, Bill, that’s in an account that’s frozen. You don’t need to spend another deficit dollar. You can literally just free that money up and it would help any small business who is struggling with PPP loans. Why don’t we do that today?”