WASHINGTON, D.C.—House Republican Whip Steve Scalise (R-La.) joined Fox News Channel’s Fox News Sunday to discuss how Speaker Pelosi’s Democrat majority did not come to Congress to work for American families. Instead, they came to Congress to remove a duly-elected President in an attempt to gain their power back. Now, in her own quid pro quo, Speaker Pelosi refuses to send her articles of impeachment to the Senate unless they meet her ludicrous partisan demands.

House Democrats claimed their case was compelling, but now they want the Senate to do more investigating. It’s become clear that this is purely political exercise for Democrats and was never about a crime. It’s time to move on. 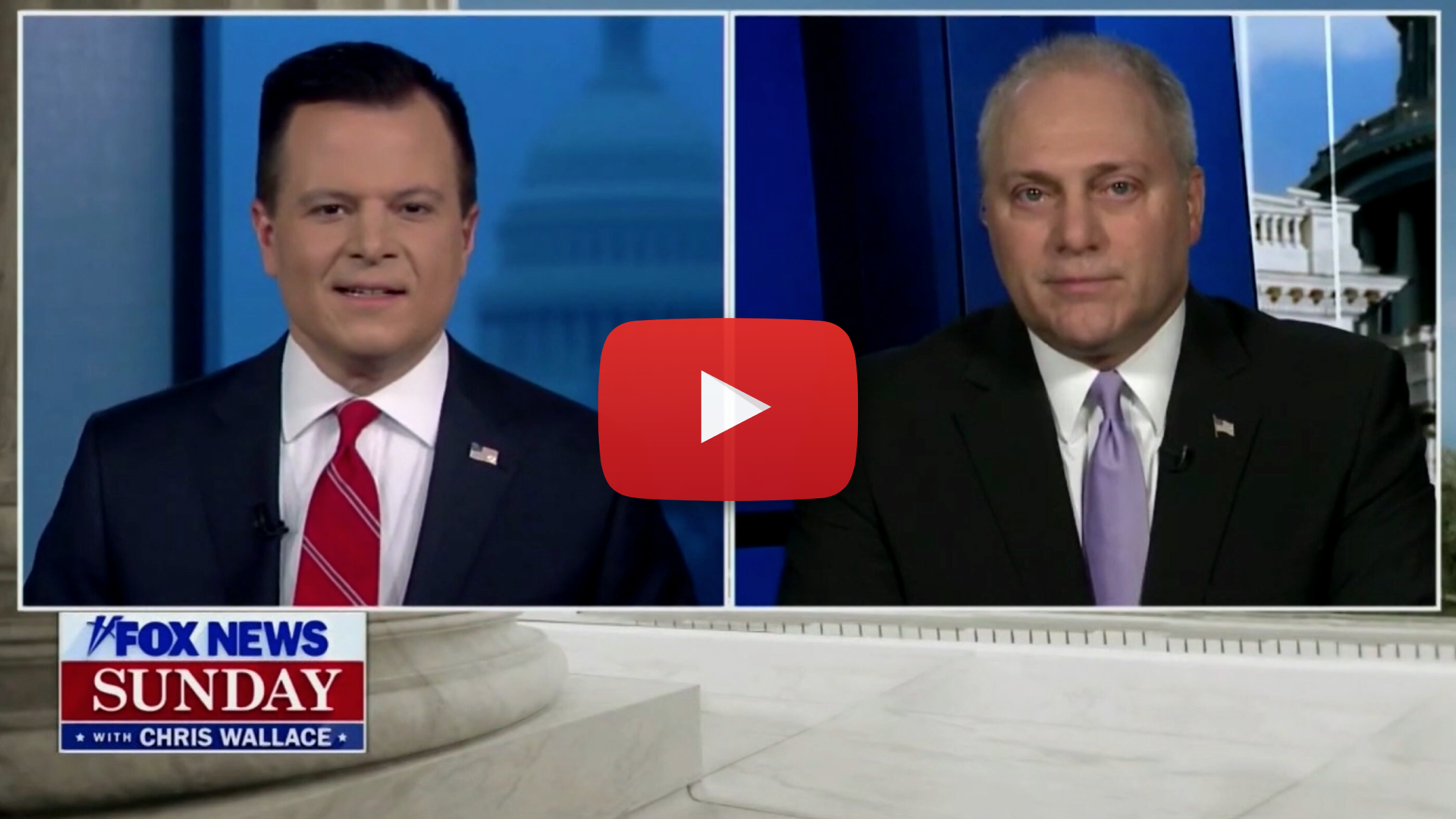 On the wave of anti-Semitic attacks in New York and New Jersey:

“I think our reaction needs to be quick and direct, that anti-Semitism is wrong, that attacks on people of faith are wrong, and that regardless of who’s attacked we’re going to stand up against it, not try to figure out who did it — that’s law enforcement’s job and law enforcement is doing a great job, by the way, of making sure that they’re getting thesuspect. Too often in Washington, you see people trying to figure out somebody’s motives instead of just saying it’s wrong and attack it, call it out for what it is. Anti-Semitism is wrong, we need to stand up against it, and it’s unfortunately starting to pop up all around the country more and more, so we need to stand up and be very vocal and very united against it.”

On Speaker Pelosi turning the Democrat party into the party of impeachment:

“Well it’s [the House’s] duty to turn [the articles of impeachment] over. It’s not like some mechanism she can control. The House passed it, they shouldn’t have. I mean, you look at what the evidence was, and Speaker Pelosi wanted to talk about the evidence. Every one of their witnesses testified under oath saying there was no crime, saying there was no quid pro quo. Maybe she’s trying to carry out her own quid pro quo by acting as if she’s got some kind of role in the Senate trial. They had a weak case, I think she knows they had a weak case. There was no evidence and no crime committed, and yet they still wanted to impeach the President to appease their radical base. That’s what this was about from thebeginning. They’ve neglected a real agenda for hard-working families, by the way, and so what you’re seeing right now is I think Pelosi just exposing the fact she has no case and trying to have one more bite at the apple. They’re going to talk about more impeachments next year. How about they focus on lowering drug prices, securing our border, doing an infrastructure package that they could have done in a bipartisan way? They don’t want to do any of that because they become the party of impeachment. They have this obsession, it seems like, with carrying out this political vendetta that they have against the President instead of working with him to get things done. At least President Trump is working for families and creating jobs, getting an economy that’s booming and higher wages in people’s paychecks — that’s what we should all be focused on.”

“Well, it’s not [Speaker Pelosi’s] role to go over to the Senate. She could run for the Senate if she wants to be a Senator, but the House has a role, the Senate has a role. It’s time for the Senate to do their job. Look, for months she was saying how important it is they’ve got to remove this President immediately, he’s a threat to their whole way of life. And then once they passed the impeachment, she doesn’t want the Senate to get the papers to start the trial. They can’t have it both ways. I think people see through this charade. It’s a political charade. This is not what our Founders intended impeachment to be used for, in fact, they wrote about it. Hamilton talked very specifically about the concern that impeachment would be used to carry out a political vendetta instead of to go after a crime. There was no crime committed, and so now all they’re doing is trying to just attack thePresident personally because their field is so weak on the Democrat side and thePresident’s done such a great job at fulfilling his promises, the things he actually ran on doing. I wish Barack Obama and Joe Biden would have stood up to Russia and helped Ukraine as much as President Trump’s helped Ukraine selling Javelin missiles, allowing them to stand up to Russia in ways that Barack Obama and Joe Biden wouldn’t allow Ukraine to do.”

On Democrat hypocrisy on the need for a fair impeachment trial:

“Well, you’ve seen [Senator Murkowski] make statements concerned about what Democrats have been doing and saying as well. You know, you’ve heard Chuck Schumer making comments recently in the last two weeks that contradict things that Chuck Schumer as a candidate for United States Senate said in 1998 when he was running, saying he was running on a platform and part of acquitting Bill Clinton when he got to vote against impeachment in the House and it went over to the Senate and voted against impeachment there. So in the end, look, the Senate’s going to conduct a fair trial. I have confidence in Mitch McConnell doing that. There was not a fair trial in the House, and I think that was very clear, and you see what Pelosi did there. Literally shutting down the ability for theminority to even have a day of hearings which is required under House rules. They broke that rule, they broke a lot of rules to ram through this impeachment charade just because they have a political vendetta against the President. He didn’t commit a crime, their star witnesses said under oath when asked, ‘Can you name an impeachable offense?’ ‘Was there any bribery?’ Every one of them said ‘no,’ and yet they still carried on. The Senate will have a fair trial, and you’ll see an acquittal. Everybody knows it’s going to end in acquittal. What [Democrats] haven’t done is what I think is just as important. They haven’t focused on lowering prescription drug prices. Which we passed a bill, by the way, unanimously out of committee, every Republican every Democrat, voted to lower drug prices. Families would be paying those lower drug prices today because the President would have signed the bill. Pelosi won’t bring that to the Floor because of this obsession with impeachment.”

On the unfair impeachment process conducted by Democrats in the House:

“Well look, you know, people can question strategy and everybody might have their own tactics of how they’d go about it. Every impeachment, when you had a Republican divided House and Senate with the White House, they’ve always negotiated with the White House to have a fair process. That I think is what’s missing in this, there was never an attempt by the Speaker to have any kind of negotiation on a fair process with the White House. It was done with a Republican House and a Democrat President under Clinton. It was done with the Democrat House and a Republican President under Nixon, they negotiated fair terms and processes so that you could have a fair trial. They didn’t have that in the House. It was very clear that Pelosi didn’t want a fair process. But in the end, it’s going to end in acquittal. And so, why don’t we focus on real things that matter for hard-working families.”

On President Trump and House Republicans working hard on behalf of American families:

“I don’t think there’s tension, I think the President has been focused on delivering for families. We just, before we left, we’re finally able to get the USMCA Trade Agreement passed. It should have been passed months ago. By the way Mike, that that was something that could create over 160,000 jobs for workers all across the country and better trade relations and sending a message to China, and Pelosi sat on that for over six months because of this obsession with impeachment. So the President said look, I want to work with Congress to get things done. They just spend all their time going after him personally because they don’t like him and as he said, they don’t like the people who voted for him, which i think is a bigger concern that they’re missing. I think those people are going to speak out again in 2020 and reelect President Trump and send in a Republican House because they don’t want the House spending all of its time carrying out political vendetta’s. They should be working for those families that President Trump’s working and delivering for.”

“You got to go back and just continue to talk about the things that we would do if [Republicans] were in the majority, actually delivering for those same families that expect Congress to be working for them, not fighting over their own personal power in Washington. And I think that’s what you see this about is you know, [Democrats] still don’t like the fact that in 2016 Donald Trump got elected. They’re trying to reverse and negate the votes of those millions of people who elected Donald Trump as our President, and they’re trying to hurt his ability next year. Many of them said it publicly, that they’re afraid President Trump will get reelected so they have to impeach him, but that’s not why you have impeachment. That, in fact, is an abuse of the power of impeachment. And I think [Democrats] are going to be punished for abusing that power next year when they go before the voters who elected him last year.”