WASHINGTON, D.C.—House Republican Whip Steve Scalise (R-La.) joined Fox News Channel’s America’s Newsroom to discuss Speaker Pelosi’s failure to make a credible case for impeachment in the House. As Democrats realize their phony case doesn’t hold up when they can’t rig the rules, Whip Scalise emphasized that it’s not the job of the Senate to mop up the impeachment failure orchestrated by Speaker Pelosi and Adam Schiff in an attempt to appease their radical base. 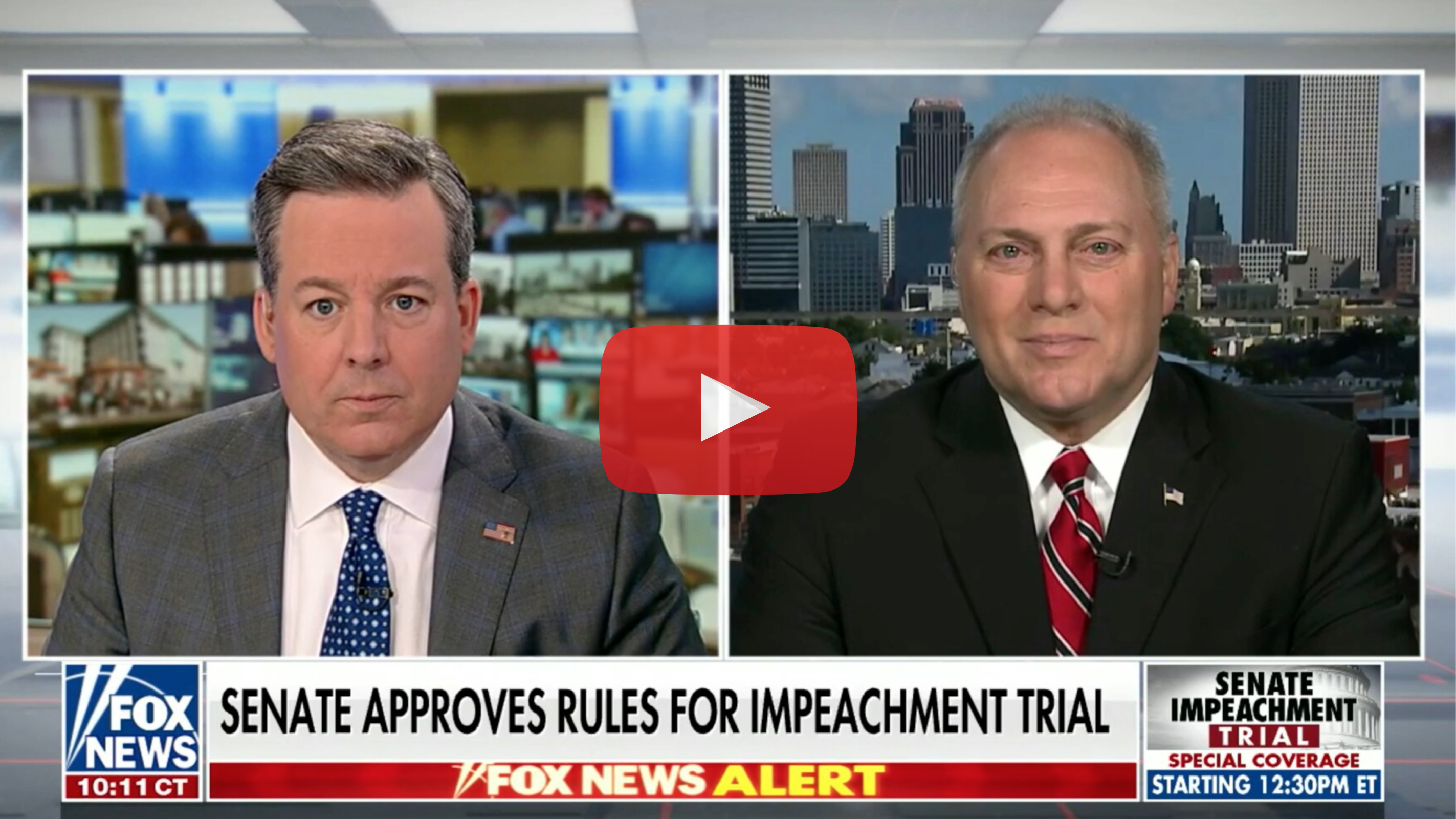 On Speaker Pelosi’s partisan, unfair impeachment process in the House:

“I wonder where Chuck Schumer was when you saw the most unfair impeachment trial in the history of our country happen in the House, where Speaker Pelosi rammed this thing through. They literally broke House rules that require that the minority get a day of hearings so that we could have actually brought the witnesses that we asked for and were denied by Speaker Pelosi and Adam Schiff. So, they did not run a fair trial. I think what you saw Chuck Schumer say too was, he’s acknowledging that the House did not have a fair trial. The fact that they need to do something differently in the Senate. By the way, it’s not the Senate’s role to mop up the mess that the House made when Speaker Pelosi rammed this thing through. So, they did not have a fair trial in the House, they’re having a fair trial in the Senate. They’re actually following the rules that they have. They’re using the precedent that was set by previous impeachments. That did not happen in the House. They didn’t make a case because the President did not commit a crime. The crime they alleged never happened, yet they impeached him anyway to appease their radical political base. Let’s get beyond this, let’s start dealing with real issues that people care about. The voters will decide the presidency in November.”

On President Trump helping Ukraine stand up to Russian aggression:

“I think the real embarrassment is the fact that [Joe Biden] has admitted already, publicly, you can see it on tv, he admitted that he went to Ukraine and did the quid pro quo. He’s the one who said, ‘Hey, I’m leaving with the billion dollars’ – by the way, Ed, the billion dollars of our taxpayer money – ‘unless you fire the prosecutor who was investigating his son.’ Lo and behold, they did fire the prosecutor, and he bragged about that. He’s going to have to answer to that. I know he gets a free pass when he’s running in the Democratic primary, but voters aren’t going to forget the fact that he literally said, ‘If you don’t fire the guys investigating my son, I’m going to take the taxpayer money.’ They did not help Ukraine. Obama and Biden did not help Ukraine stand up to Russia. President Trump has, by the way, he sold them Javelin missiles to stand up to Russia. He gave them the aid, by the way, that’s in question. They got the money, they didn’t do the investigation. There should not have been an impeachment in the House. The fact that you saw Schiff and his Democratic colleagues get chided by the Supreme Court Justice, that’s the embarrassment. They went on the Senate Floor and embarrassed themselves.”

On the Senate’s decision to call witnesses during their impeachment trial:

“That’s ultimately up to the Senate to figure out if they want to bring in more witnesses and if they need to. But in the House, we tried to do that. We asked for that. The Democrats got to bring all of their witnesses. They did try outs, in fact. Schiff, behind closed doors, you saw it for months, he had these secret meetings where they literally had tryouts to see who would be their best star witnesses to bring out on TV. Every one of them, by the way, flopped. Every one of their star witnesses was asked under oath in the House, ‘Can you name an impeachable offense?’ Not one of them could name anything. And yet, that’s the case they have. It was a weak case. And so now, they want to try to mop up that mess in the Senate, but that’s not the Senate’s job. The Senate’s job is to take what the House did, as bad as it was, and vote on it. They are having the trial.”