WASHINGTON, D.C.—House Republican Whip Steve Scalise (R-La.) joined Fox News Channel’s The Ingraham Angle to discuss President Trump’s and Republicans’ commitment to reopening the government in a way that protects America’s southern border despite Democrats’ refusal to negotiate or present a counteroffer. Whip Scalise called out Democrats’ latest obstruction effort with Speaker Nancy Pelosi’s unprecedented decision to prevent the President from delivering the State of the Union this month and questioned why Democrats don’t want the American people to hear the reality of what’s happening at our border. 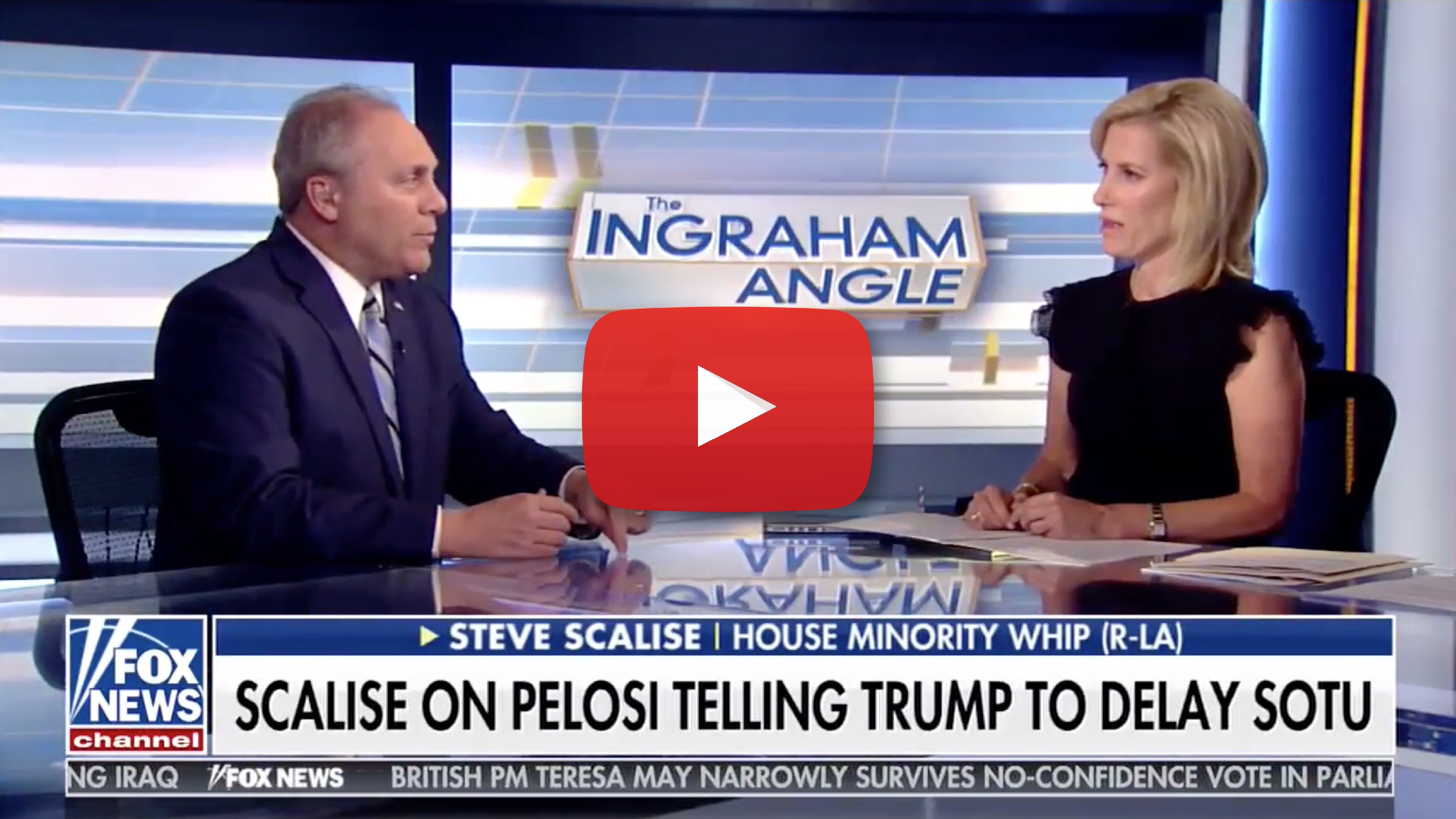 On Democrat Leaders ongoing refusal to compromise on a solution that opens the government and protects America’s southern border:

“Laura, the left is becoming unhinged. I’ve been in all those meetings in the situation room with Nancy Pelosi and Chuck Schumer, the top leaders in the House and Senate. In every single meeting the President was not only calm but he was putting options on the table to reopen the government while securing the border. Not one single time, did they ever put an alternative on the table. Not once.

“This has been going on for almost 30 days now. The President was there during Christmas waiting. He’s there now.”

On Speaker Pelosi’s unprecedented decision to prevent President Trump from delivering the State of the Union this month:

“The President has been steadfast and consistent in saying that he is going to do everything it takes to secure America’s border. He’s pointed out just how bad the problems are. This latest stunt, and it’s not even a stunt. This is unprecedented where a Speaker of the House is uninviting a president to the State of the Union.”

“They have tried to do everything to insult the President, to not even acknowledge that he is the President. The bottom line is the American people want to know the facts about this. They want to watch. They’ve been tuning in. They watched last week and then saw Schumer and Pelosi give that ridiculous looking response.

“I think they are seeing that it’s starting to come unhinged on their side. When you see more Democrat members of Congress getting really nervous about this because they are seeing people not get paychecks, and they are seeing that their party is standing up for open borders. They don’t want to secure the border. That’s an untenable position to hold. So to say you’re not going to let the President come to the Capitol to give a State of the Union, this never happened before.”

On his support for President Trump to circumvent Speaker Pelosi’s political stunt and deliver the State of the Union somewhere else:

“They might be holding the paychecks of government workers hostage, but now to literally hold the State of the Union hostage, Laura, it’s an untenable position that Nancy Pelosi can’t sustain.”

“I’d like to see him pick another venue. Go near the border. Go show exactly what’s going on not only at the border. If you live in Pennsylvania, you know somebody whose son died of an overdose from heroin. 90 percent of the heroin is coming from the southern border. This problem affects everybody in this country. We have got to secure the border.

“Pelosi can try to stop the truth from coming out. I talked to Secretary of Homeland Security Nielsen this evening about this very problem. She said the Secret Service has been planning this. They are prepared.”

“The Democrats never reached out to them to find out if this is a problem. It’s not a problem. They’re afraid of the facts coming out. Pelosi can’t sustain this.”