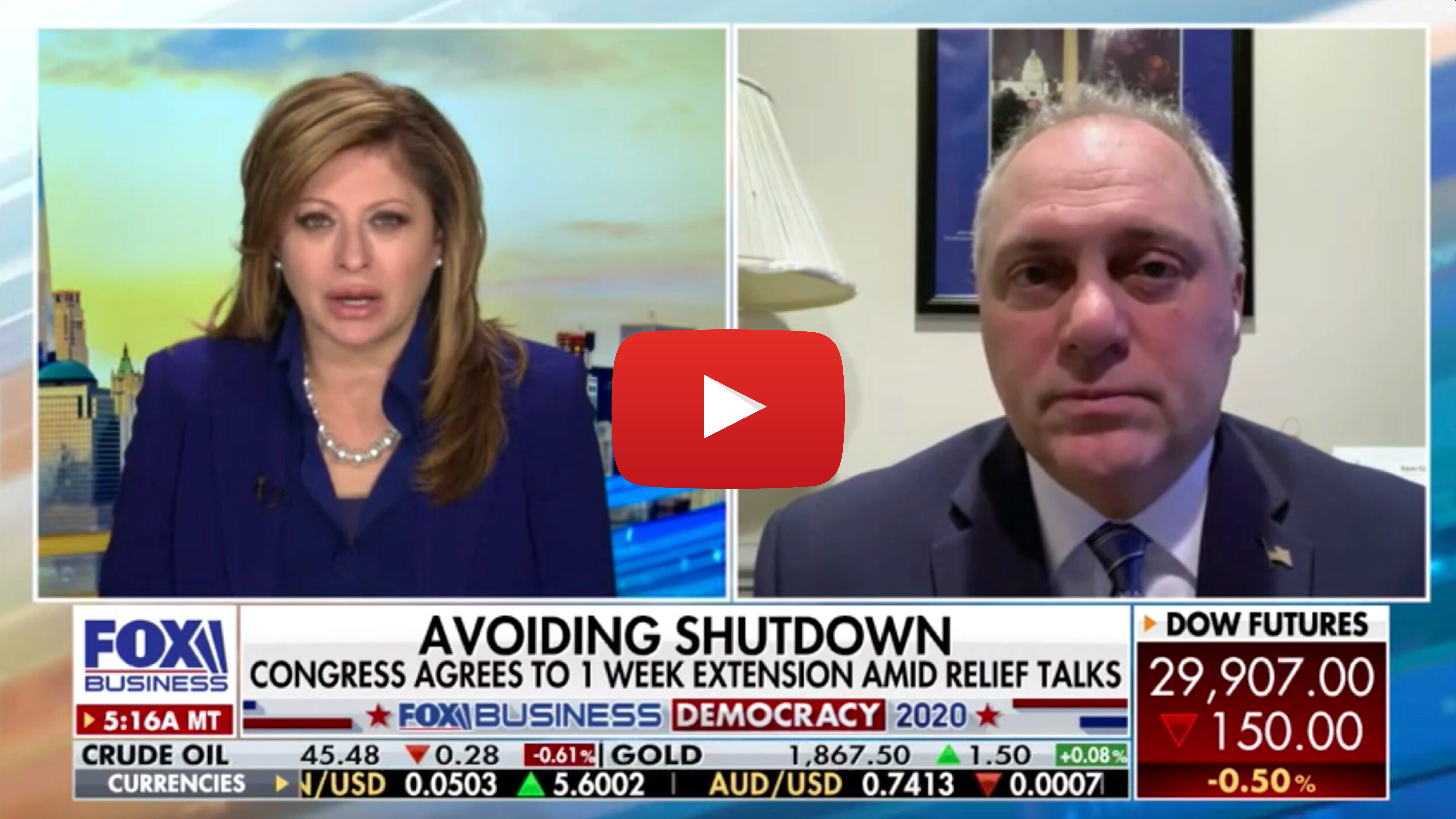 On the immediate need for a vote on PPP relief:

“Look, there’s been a lot of interest on both the Republican and Democrat side for months now on helping those small business whose are struggling, and it’s heart-breaking – every day you hear more stories of businesses that are dying on the vine. You see the hypocrisy of some of these governors saying you know, you can’t open your restaurant, but then they’re out at their favorite restaurant and it’s just killing the psyche of these small businesses. We have a bill by Steve Chabot that would be using the $137 billion [leftover from PPP loans] that’s already frozen, sitting in an account, to let those businesses go for a second round of funding who are struggling. For many reasons, Speaker Pelosi hasn’t brought that bill to the Floor.

“And in fact, just last week, [Speaker Pelosi] acknowledged one of the reasons she’s holding up relief is because she’s waiting for a new President. I think that just angers so many people who are saying, ‘Stop holding us hostage.’ So, there’s a lot of interest in getting something done, but there’s not a lot of interest in bailing out failed states, for example, or sending checks to people who are here illegally, which are some of the things that the Democrats were holding out for. I think there’s interest in getting a deal done. We need to get it done yesterday because there are so many businesses who are dying on the vine. We also, Maria, need to address the problem that right now some businesses would be facing actually being taxed on the PPP loans they already took out, that was never Congress’ intention. That needs to be fixed as well.”

On Speaker Pelosi using the COVID crisis as leverage to play politics:

“It’s infuriating, Maria, because every day we hear stories of businesses. You know, in New Orleans, we love our restaurants and there’s story after story of famous, world class restaurants that will never open again because they didn’t get that relief that they needed. If we pass a bill next week, that would be great. But there are thousands of businesses that should have never closed if they would have gotten that help months ago. In September, I started bringing up the idea to the Majority Leader that we had this bill by Rep. Chabot that everybody agreed to. You would get over 400 votes on the House Floor to let businesses go for a second round of [PPP] loans. It’s not a dime of new deficit spending, its money sitting in an account, frozen. Just let the money be freed up for the business who are struggling, and [Democrats] would never bring the bill to the Floor. We found out last week when Speaker Pelosi made that enlightening, but incredibly discouraging statement that the reason it was being held up was not because of differences of opinion, it’s because she was waiting for a new president. She didn’t want Trump to get credit. It’s unbelievable, because how many thousands of businesses will never open again who could have been saved, and the jobs, there’s millions of jobs that are gone, just vanished from our economy. Even with the vaccine, with our economy eventually coming back, these businesses will never come back and they should have been able to survive.”

On Democrats’ disastrous foreign and environmental policies that would hurt America:

“President Trump brought this up multiple times during the campaign. I think it was a big issue and a concern with so many people that a Joe Biden administration would be soft on our enemies, soft on China, soft on Russia. As you said, going back into the failed Iran Deal where they get a nuclear weapon. Frankly, it was the reaction to the Iran Deal that brought countries like UAE and Bahrain to the table to sign peace agreements with Israel and President Trump led that effort. And you look at the Paris Accord. For goodness sake, they say they would bring John Kerry back to get us into a deal that literally would hand the keys to the store over to China because China’s exempt from the Paris Accord. Not a single country in Europe is even in compliance because these are ridiculous, unachievable targets and it wrecks manufacturing economies.

“Why would we ever want to do that to America? You know, where Trump had us at the most robust economy in the history of our nation before COVID. We need to get back to that, that’s where our focus needs to be, on bringing manufacturing back yet again, bringing jobs back, and the energy revolution has to be part of that. You know, you don’t want to get rid of American energy. These things are going to be made somewhere in the world, why not make them in America where we’re actually reducing carbon emissions through innovation, not through reckless policies that will kill manufacturing jobs in America.”

“Think of the Green New Deal, they literally exempt China until 2030. They burn plastic. I mean, it’s toxic things that they burn, and we have great environmental standards. These people that love beating up on America need to recognize America is the leader in the world in innovation. Don’t crush that and send those jobs to China.”