Whip Scalise also joined Fox News Channel’s Fox & Friends this morning to demand answers from Speaker Pelosi about why Rep. Eric Swalwell remains on the House Intelligence Committee when his reported ties to a Chinese spy are an alarming national security risk. Whip Scalise slammed Rep. Swalwell for falsely accusing Republicans of collusion to distract from his own foreign influence. 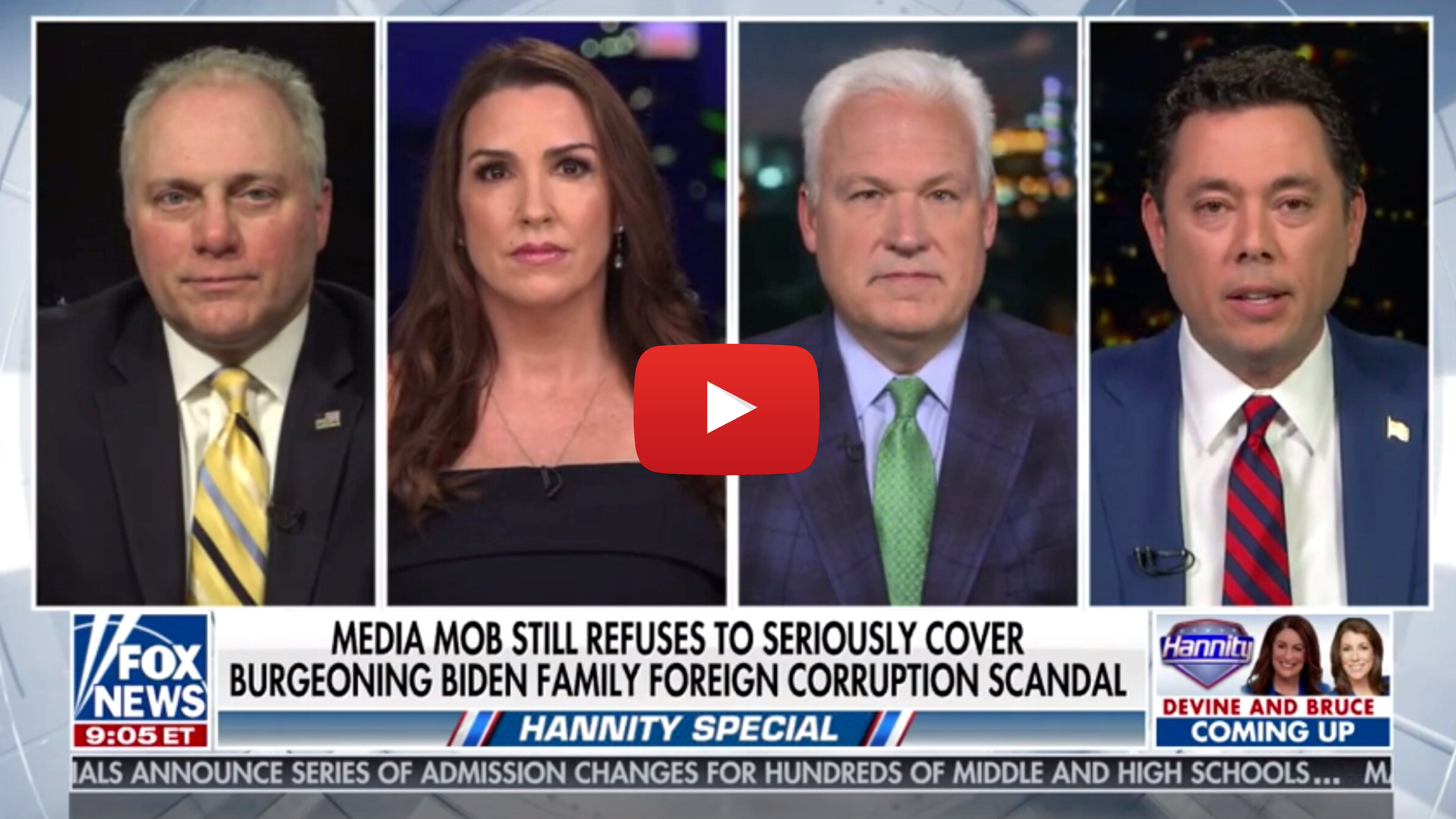 Click here or on the image above to watch the Hannity interview. 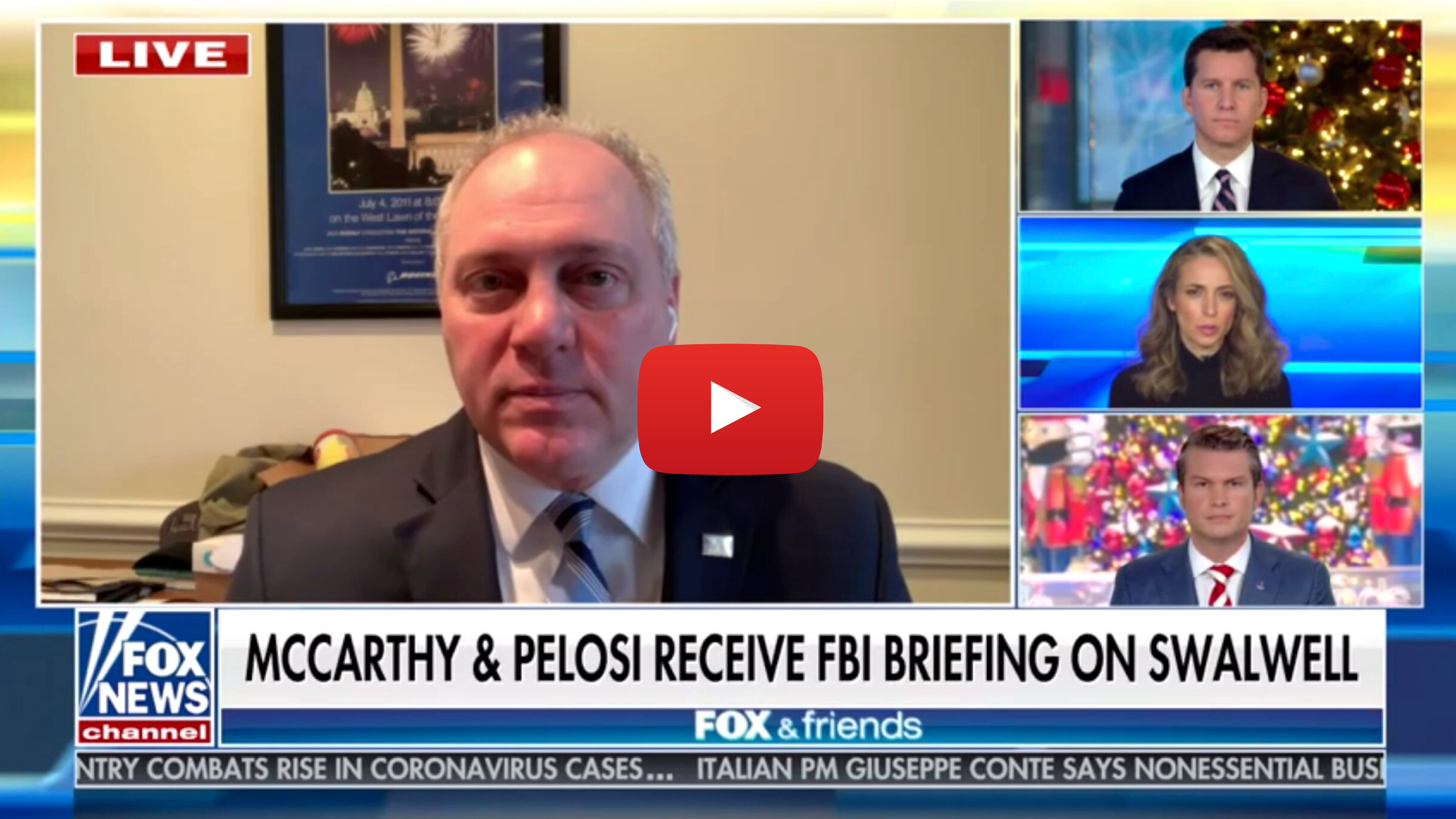 On Rep. Eric Swalwell’s reported ties to a Chinese spy and position on the House Intelligence Committee:

“Jason, you just can’t make this stuff up. I mean, you served in the House. You know how hard it is to get on the House Intelligence Committee. And here’s a guy who was compromised back when he was a council member in California before he was elected to Congress, targeted by the Chinese, ended up not only having some kind of a relationship with a Chinese spy but she actually infiltrated his office with other Chinese spies. And then he gets on the Intel Committee in his second term.

“Look, there are more questions than there are answers right now. And Speaker Pelosi won’t answer these direct questions. Why is he still on the committee? He absolutely needs to be removed from the committee. But it makes you wonder. Look, clearly, the House Democrats have a China problem. They have been soft on China on so many fronts. But we were about to put together a bipartisan commission to look into the China’s activities about a year ago and Speaker Pelosi pulled the plug on it. We went forward anyway. Kevin McCarthy appointed Mike McCaul as the leader. He put out a blistering report that identified all kinds of problems that China has caused here in the United States. But it begs the question, why did Pelosi pull back on that China commission? Why does she keep Swalwell on the committee? What’s really going on with China that they have this blind eye towards the espionage that has infiltrated Members of Congress who will serve on the House Intelligence Committee?”

On the mainstream media’s failure to hold Democrats accountable:

“Look, there needs to be a special counsel because there are so many questions out there that need to be answered. And these are serious national security questions. You know, when you look at what’s going on with Swalwell. Swalwell, by the way, has never been shy to get in front of a camera. So, the fact that he is avoiding the press tells you there is something serious going on there. Again, why he is still on the Intelligence Committee boggles the mind.

“But then with Hunter Biden, more things continue to come out. You go back to the first presidential debate. President Trump brought up some of this stuff and Joe Biden denied there was anything going on with Hunter Biden in China or Russia. And now, you’re seeing even more things that there is actually an investigation going on.

“Look, there are a lot of serious questions that are being raised, that should have been answered, by the way, to Matt’s point if there was an aggressive press out there doing their job on both sides. They went after Trump on things that turned out not to be true and they impeached him on something that never even happened. Frankly, the things that they were accusing Trump of they were doing themselves. The spy activity was Chinese spies infiltrating Democrats, not Russian spies infiltrating Republicans.”

“Did Speaker Pelosi know, by the way, about the tie to Fang Fang the Chinese spy before she put him on the committee? And why hasn’t she removed him now? There are serious questions that need to be raised, especially when you look at the China problem that the Democrat Party has. They’ve been soft on China on many fronts including [when] we were putting together a bipartisan commission to look into China about a year ago. Speaker Pelosi pulled back and ended up not participating. We still moved forward. Leader McCarthy put together a slate of Members, including Mike McCaul, who issued a scathing report on China’s scathing activities. Not just the Wuhan virus but stealing intellectual property, clearly spying on America. Why is this guy still on the committee and why won’t Speaker Pelosi answer these real questions?”

On Rep. Swalwell falsely accusing Republicans of collusion to distract from his own foreign influence:

“He was the guy running around if you remember during impeachment, probably the most vocal voice to jump in front of anybody to get to a TV camera to call Republicans Russian spies, and accusing the President falsely of being involved in Russian spies. Turns out he is the guy that is involved with spies, in this case the Chinese spy. But look, if Speaker Pelosi thinks the story is going away, it’s just starting to get legs as they would say. Even though the mainstream media is not covering it right now, people in the intelligence community, both Republican and Democrat, are very alarmed by developments in this story.

“There is more to this. And, you know, was Swalwell tipped off prior to her leaving the country? Why did she leave the country? Typically, if you find a spy, our intelligence agents want to hold on to them to find out more information about what they were doing and she was able to flee the country. All of these questions need to be answered. But to think that the story is going to go away, it’s very alarming and it’s just the tip of the iceberg with China’s involvement with this country.”

“These negotiations have been going on for weeks now. I would have liked to have seen it resolved back in September. We had a bipartisan bill to give people another round of Paycheck Protection Program loans for our small businesses who were dying on the vine so they could keep those millions of jobs tied to them. I really think we are going to have it completed by today. The final details were almost worked out last night. Today I think you’ll see it come together and tomorrow we could vote on that package. So, I’m very hopeful we will get this voted on by the end of this weekend and then that relief will be available to our small businesses and all of those families across this country who are still struggling starting Monday morning, hopefully.”