WASHINGTON, D.C.—House Republican Whip Steve Scalise (R-La.) joined Fox Business Network’s Mornings with Maria to discuss Speaker Pelosi’s partisan bailout plan for the U.S. Postal Service. Whip Scalise blasted Speaker Pelosi for holding families and businesses hostage to her partisan demands in the middle of a pandemic, while instead choosing to focus on a fabricated crisis. 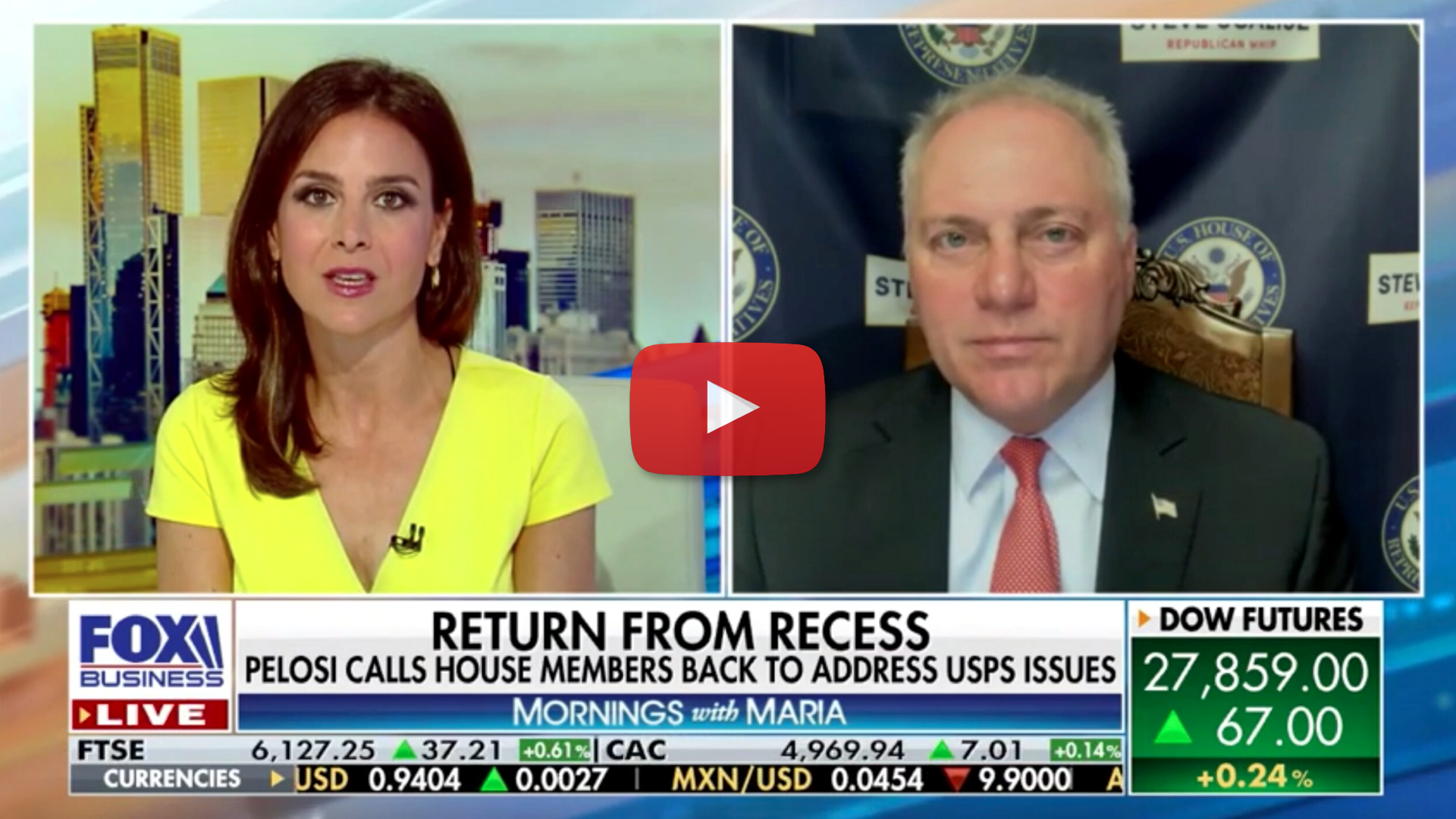 On Speaker Pelosi prioritizing her partisan demands over relief for American workers and families:

“It’s interesting how the Speaker has been trying to literally hold hostage families and businesses and won’t bring the House back in for [COVID relief] but when it comes to this continued desire to get, and we’re not talking about enough money to keep the Post Office running, their revenues have actually been up since the pandemic. She’s been trying to get about $75 billion, and keep in mind, their total budget is about that amount for the entire year. So, you know, she’s been trying to make a money grab for a long time, well before COVID. She’s just once again trying to take advantage of a crisis. The Post Office is delivering the mail. If every American voted by mail it would represent maybe a two percent increase over what they did just in June of this year, so this isn’t about whether or not the Post Office can deliver the mail. That’s going to be taken care of regardless. It’s about Nancy Pelosi just trying to grab more money and leveraging and holding families hostage and businesses hostage during this pandemic.”

On protecting the integrity of our election system and voting legally:

“This is really a fabricated crisis by the Speaker. Look, we had elections in Louisiana this weekend. I went and voted in person on Saturday and it was a smooth process. There’s sanitizer, I had a mask on, there were no issues at all with voting in person. However, if somebody wants to vote by mail that’s always been an option and every state does it a little bit differently. But what Speaker Pelosi has been trying to do, again, long before the pandemic, is mandate that every single person on voting rolls gets a ballot mailed to them. And as we know, no state has 100% accurate voting rolls. And so, if you have millions of ballots just out there, who knows where, and houses where they might have registered people illegally, they would get ballots. That’s not a safe system, that’s not going to protect the integrity of people who are voting legally. So, why don’t we make sure that the process works properly, not mailing ballots to everybody on the rolls, even people illegally on rolls – that would be ludicrous.”

On the socialist takeover of the Democrat party:

“Regardless of what their message is going to be on TV, what their message has been behind closed doors is that Bernie Sanders has literally taken over the ideas and thought process of the party. He’s literally their thought leader with AOC leading the charge on things like energy policy, where they want to wreck our energy economy. They want to move us to a socialist left position. That’s not where America is, whether [or not] they’ll admit it tonight. Their bills that they’ve filed, look, Kamala Harris is a co-sponsor of Medicare for All, it’s the bill that gets rid of private health insurance. That’s Bernie Sanders’ bill and their VP pick is literally a co-sponsor of getting rid of your private health insurance and putting about 180 million Americans on Medicare which already has its own solvency problems that we need to fix. So, they’re moving further to the left.

“President Trump is trying to rebuild this economy and get families back to work in a safe way. And also, by the way, President Trump is working with Operation Warp Speed on finding an actual vaccine for COVID-19. So, the President’s working hard, I’m glad he’s going to Wisconsin and sharing his message while [Democrats] are trying to take this country to the socialist left.”

“Keep in mind, you know, you had at the top of the hour the reports of the violence and attacks on police in Seattle. Joe Biden has embraced the defund the police movement by saying he’s willing to reallocate money away from police. He’s trying to play word games with it, but reallocating money away from police is defunding police. And you’ve got Joe Biden on record saying that he supports that. And of course, you know, we’ve seen Kamala support that as well. So, again, does the country want to move to the socialist left where they defund police and we turn the country into Seattle? I don’t think that’s where we are as a nation, but that’s what this debate ultimately is going to be about. That’s why Joe Biden needs to fulfill his promise to be a part of all three debates with President Trump.”