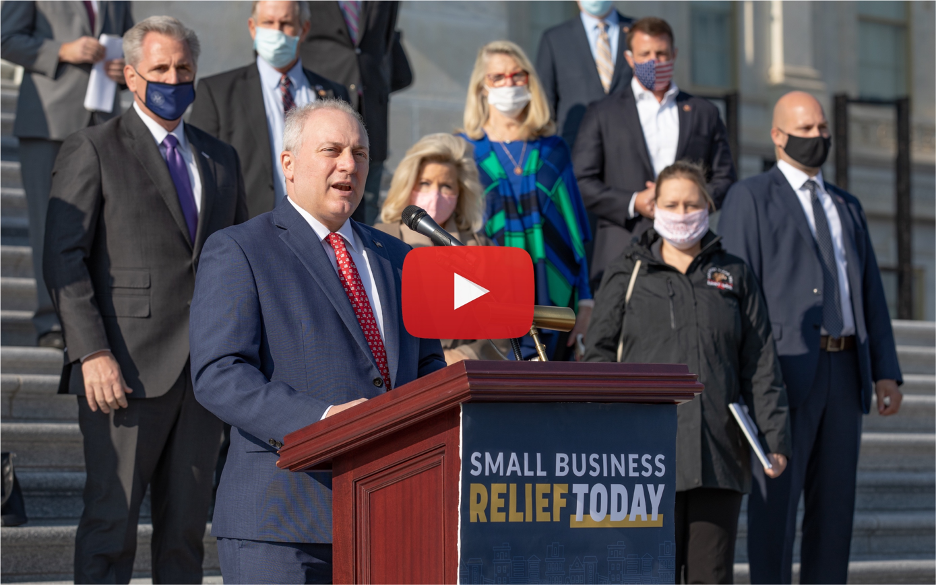 On Republican efforts to provide targeted relief to small businesses:

“When you look at where we are right now as a country, there are thousands of small businesses that will spend this weekend trying to figure out whether or not they’re going to be able to remain open. Whether their dreams are going to be crushed, whether the millions of families who rely on those jobs will be able to sustain themselves through Christmas. And during that period, for months now, we have been trying to get a vote on a bill that everybody agrees on. The [Rep. Steve Chabot] bill that [Rep. Jamie Herrera Beutler] has the discharge petition on is very straightforward.

“There are a lot of areas where we’re still in disagreement, but one area where we all came together and passed the CARES Act was that we need to help those small businesses who are struggling and those families who are wondering whether or not they’re going to have a job to go back to on Monday. We should not be leaving today without passing that Chabot bill. If it was put on the suspension calendar, […] I’d suggest we would get over 400 votes on that bill. There is wide bipartisan support. And yet, we see Speaker Pelosi continues to play games. She admitted the other day, as our Leader pointed out, that one of the reasons she won’t bring up bills like this is because she’s waiting for a new president. These small businesses don’t have the time to wait on a new president or some political game by the Speaker before they make a decision on whether or not they will close for good.”

On Speaker Pelosi using the COVID crisis as leverage to play politics:

“We’ve already lost over 100,000 restaurants in America that will never reopen. A third of every single small business in the entire state of New York is gone for good. This is a real issue that we don’t have time to wait on. There’s a long list of areas where we are in disagreement. Every time the President, or Secretary Mnuchin, or Mitch McConnell put out another plan on the table, all Speaker Pelosi does is says ‘No.’ She doesn’t come up with an alternative. They continue to play partisan games and people’s lives are at stake. This game has to end. This game of chicken where hostages are being taken, and the hostages are America’s small businesses. The hostages are millions of families who just want to be able to go back to work.”

“The safety protocols are out there. You’ve had some of the smartest minds in medicine say there’s nothing wrong with having safety protocols where you spread people out and have outdoor dining. And yet, you’ve got some of these governors across the country that are telling you [that] you can’t go to your local restaurant, yet they’re going to their favorite restaurant. That hypocrisy by these Democrat governors and mayors has to come to an end. It has to end now. How many times have we seen examples of a governor telling you [that] you can’t do something and they’re doing it? A Mayor telling you [that] you can’t do something, and then they’re caught doing it. A mayor [going to] Cabo telling you not to hang out with your family when he’s hanging out with his family for Thanksgiving. This is madness, this is insanity, and it’s not based on science. If it was based on science, they wouldn’t be doing it. But they’re doing it to control these small businesses, to crush these small businesses.”

On the immediate need for a vote on PPP relief:

“We see what’s going on. Everybody sees what’s going on. The Speaker acknowledged it the other day where she admits she’s playing games with people because she wants to wait until the new president’s there. She doesn’t want Trump to get credit. This isn’t about who gets credit, it’s about who we can save, who we can help, who needs help, and we’re in agreement on parts of this. Let’s pass the bills that we have agreement on. And there are really good bills that we do. That Chabot bill is one example. You could literally save every small business in this country that’s struggling by bringing up that bill and it wouldn’t even add a dime to the deficit. That money, the $138 billion dollars, is sitting in an account frozen. This isn’t a new program; this is a program that’s been widely successful. Our local banks know who these small businesses are. They need the relief now; they can’t wait another week.

“I’ve been telling the Majority Leader in our colloquy since September that this bill is out there and has wide bipartisan support, and [Democrats] don’t deny it. They just point to all the areas where we disagree while they’re holding these small businesses hostage. The game has to end. They need to bring this bill to the [House Floor] and we’re calling on Speaker Pelosi to bring this bill to the Floor to save all of these small businesses who are dying on the vine and need this relief. They need the relief today, not next week, not next month, not whenever Pelosi decides to stop playing games. So, that’s what we’re calling on the Speaker to do. Bring up the Chabot bill. Let’s give the relief to these small businesses who need it now. Let’s save those millions of jobs so that they can have their Christmas like we want everybody else to be able to celebrate this Christmas season.”