Whip Scalise criticized Democrats for advancing this legislation while over $1 trillion from previous relief bills remains unspent, and blasted Democrats for not supporting a Republican motion to redirect the money in the COVID relief bill for Pelosi’s Bay Area Tunnel to mental health services for kids whose schools are still closed. 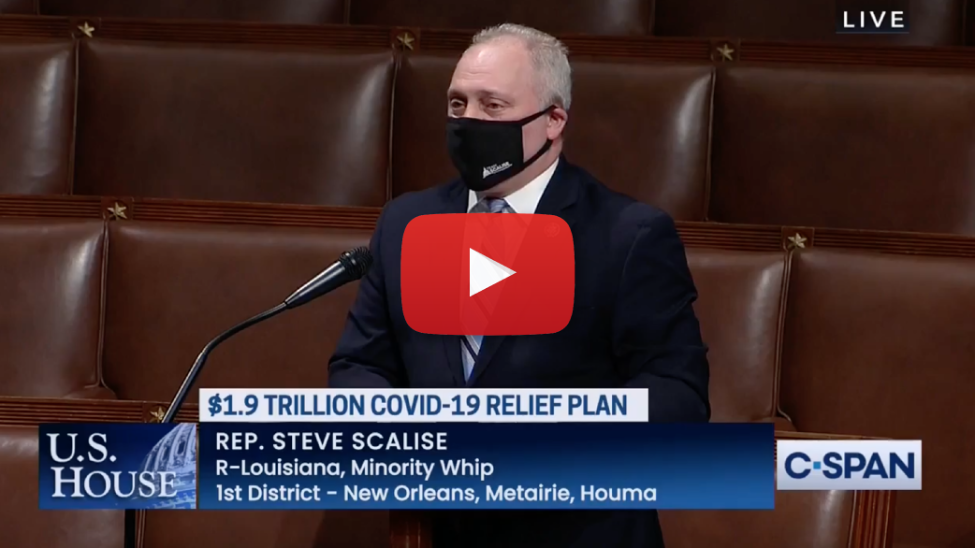 “We’ve seen you talking about over a trillion dollars that’s still available from previous bipartisan bills. That’s out there. There is tens of billions of dollars to reopen schools that’s available today that’s not being used. We had amendments to say any new money in this bill for schools is tied to reopening schools. Do you know that every Democrat voted against that amendment? In fact, if you look at some of the spending in this bill that has nothing to do with COVID – $350 billion to bail out failed states. California gets over $40 billion in this bill when they just announced they had a $10 billion surplus.

“In fact, California is going to be getting a subway for the Bay Area – $112 million. Mr. Speaker, I say we defund [the Bay Area Tunnel] and give that money to those students right now who are being held back from going to school who have mental health issues. That’s what [Rep. Ashley Hinson’s] amendment will do. The motion to recommit actually focuses on helping kids. We are holding our kids back. This bill will actually delay reopening of schools.

“95% of the school money in this bill can’t even be spent till 2022. Our kids can’t wait. We ought to be focused on helping families, on helping businesses, on reopening schools, and more vaccines. If this bill did those things, they wouldn’t be bringing it up at midnight on a Friday night.

“This bill ought to be in full public view. People, you don’t pass this bill to find out what’s in it. We need to defeat this bill and help families. I yield back the balance of my time.