WASHINGTON, D.C. — Today, House Republican Whip Steve Scalise (R-La.) joined Fox Business Network’s Varney & Co. to discuss how President Biden’s war on American energy and weak presence on the world stage has fueled Vladimir Putin’s violent invasion of Ukraine. Whip Scalise highlighted that the Biden Administration’s anti-American energy policies have made the United States and its allies more reliant on hostile foreign nations for energy, and pointed out that Russia earned over $700 million per day from its oil and natural gas sales to the United States, the United Kingdom, and the European Union before its assault on Ukraine began. Whip Scalise urged President Biden to ramp up U.S. energy production to reduce the cost of gasoline instead of begging America’s enemies like Venezuela and Iran for oil. 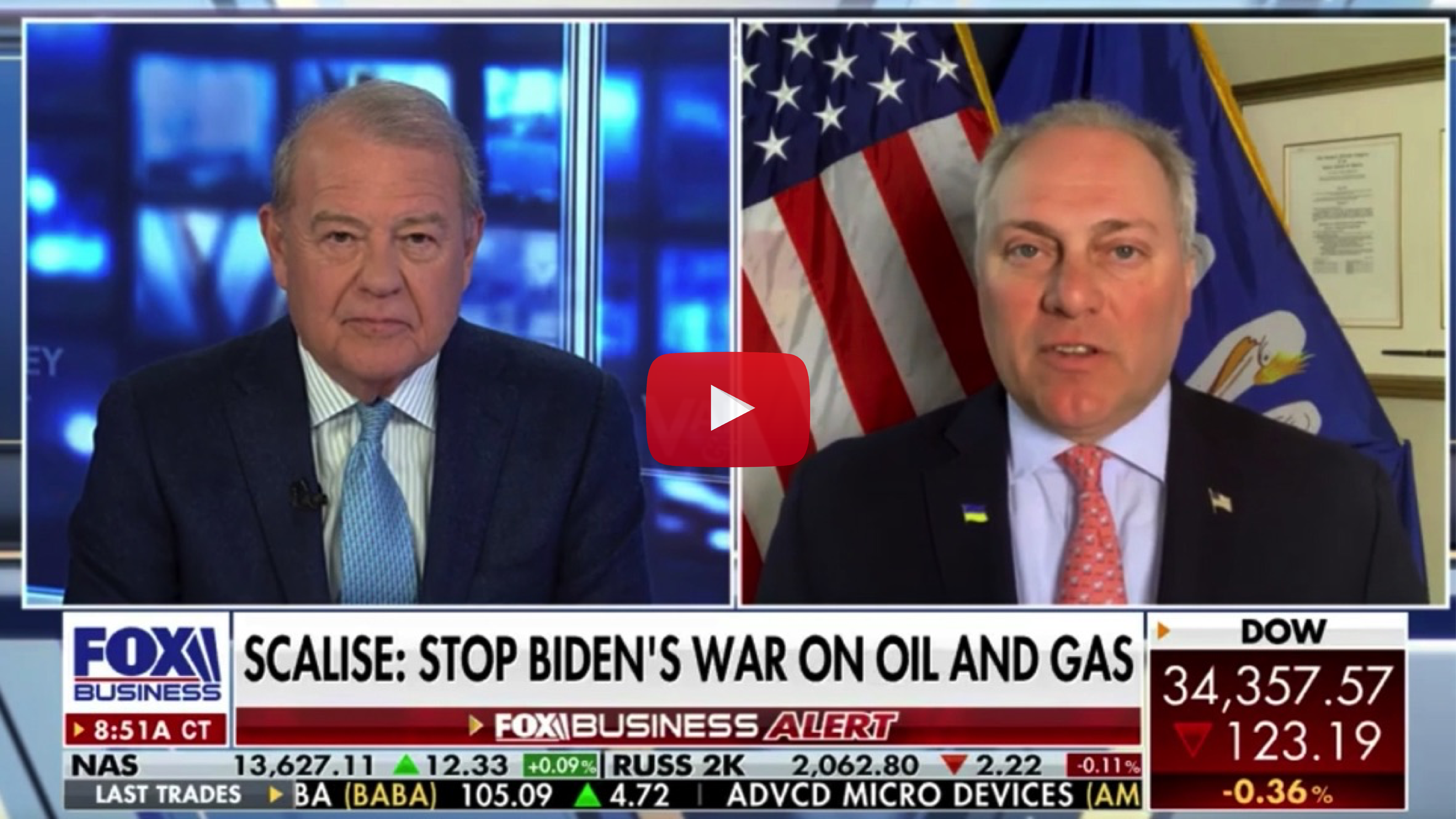 On the need to reverse President Biden’s war on American energy:“Well, Stuart, I think you’re seeing right now the pressure building intensely as families are paying over $6 a gallon for gasoline. I mean, people get irate when they see the price at the pump go over $100, and they’re still just halfway through filling up their car. And the only answer you get from the Biden Administration is, ‘Well, go buy an electric car, or it’s somebody else’s fault, or the dog ate your homework.’“People are fed up with the excuses. They know [President] Biden is not drilling on federal lands. He talked about it as a candidate. He said he was going to shut off American oil and gas production. And so, he’s begging dictators – he was begging Putin to produce more oil – now he’s begging Iran [and] Venezuela [for oil]. Stop begging dictators for more oil when the answer is under our feet right here in America. We can lower gas prices and take away Putin’s leverage to fund this war in Ukraine.”On the Biden Administration’s misplaced energy policies:“You know, the President clearly is [being] held hostage [by climate extremists]. Speaker Pelosi, you know, all these people that hide behind the Green New Deal and global warming and all this stuff – they act as if climate change is the reason we shouldn’t be drilling and then they go beg dictators to drill more oil in countries where they emit more carbon than if we made it in America.“You actually reduce carbon emissions if you made it in America instead of some of these other countries like Russia, like Iran, like Venezuela that don’t have the standards we do. So they love beating up on America, but then they turn around quietly and go and beg for the oil from countries that do things dramatically worse.“Look at Putin right now. He’s increased his sales by 30 percent of oil to Europe right now because Europe used to be able to get more from us. We were exporting oil to our friends around the world. We’re not right now. We need to cut off Putin’s supply of oil. He’s getting over $700 million a day to finance this war in Ukraine. This is ridiculous. And people are fed up with it. [President] Biden is ignoring the problem, thinking he can blame his way out of it when people know the answers right here in America, and they’re livid about it.”On President Biden’s failure to protect Ukraine:“Well, nobody likes what Putin is doing in Ukraine. But [President] Biden [is trying] to blame everybody else under the sun. And, you know, you got Pete Buttigieg as Transportation Secretary giving, you know, his Marie Antoinette moment saying, ‘Let them eat cake. Oh, just go buy an electric car,’ which by the way, costs a lot more money. Good luck, if you wait in line, maybe six months to get it ordered because of the backlog with the supply chain that his agency has failed to address.“You know, people know that’s lunacy. And they say, ‘Well, why aren’t you just drilling in America?’ It would create jobs, by the way, but it would also take away dependence on oil from these dictators around the world. Stop funding countries like Russia, who are using this money to go and kill people in Ukraine.“You know, Zelenskyy gave an incredibly impassioned plea. He just wants the ability to defend his country. [President] Biden can’t even figure that out. [President] Biden won’t even help get the MiGs from Poland to Ukraine when Zelenskyy is begging him for it. I mean, lives are being lost. Maternity wards are being bombed. Just let us control the sky, and [President] Biden can’t even do that.”