WASHINGTON, D.C. — Today, House Republican Whip Steve Scalise (R-La.) joined Fox Business Network’s Kudlow to discuss how dozens of Democrat lawmakers are retiring because they know that their destructive far-left and anti-parent policies are extremely unpopular with voters. Whip Scalise emphasized that the American people are furious that President Biden and Speaker Pelosi are doubling down on their big government socialist agenda instead of fixing their self-made crises that are hurting families, workers, and small businesses. In addition, Whip Scalise spoke about the need to make the Tax Cuts and Jobs Act permanent and previewed House Republicans’ plan to introduce a bold conservative agenda this year that will lower inflation, cut energy costs for American families, and put checks and balances on Democrats’ extreme legislative proposals. 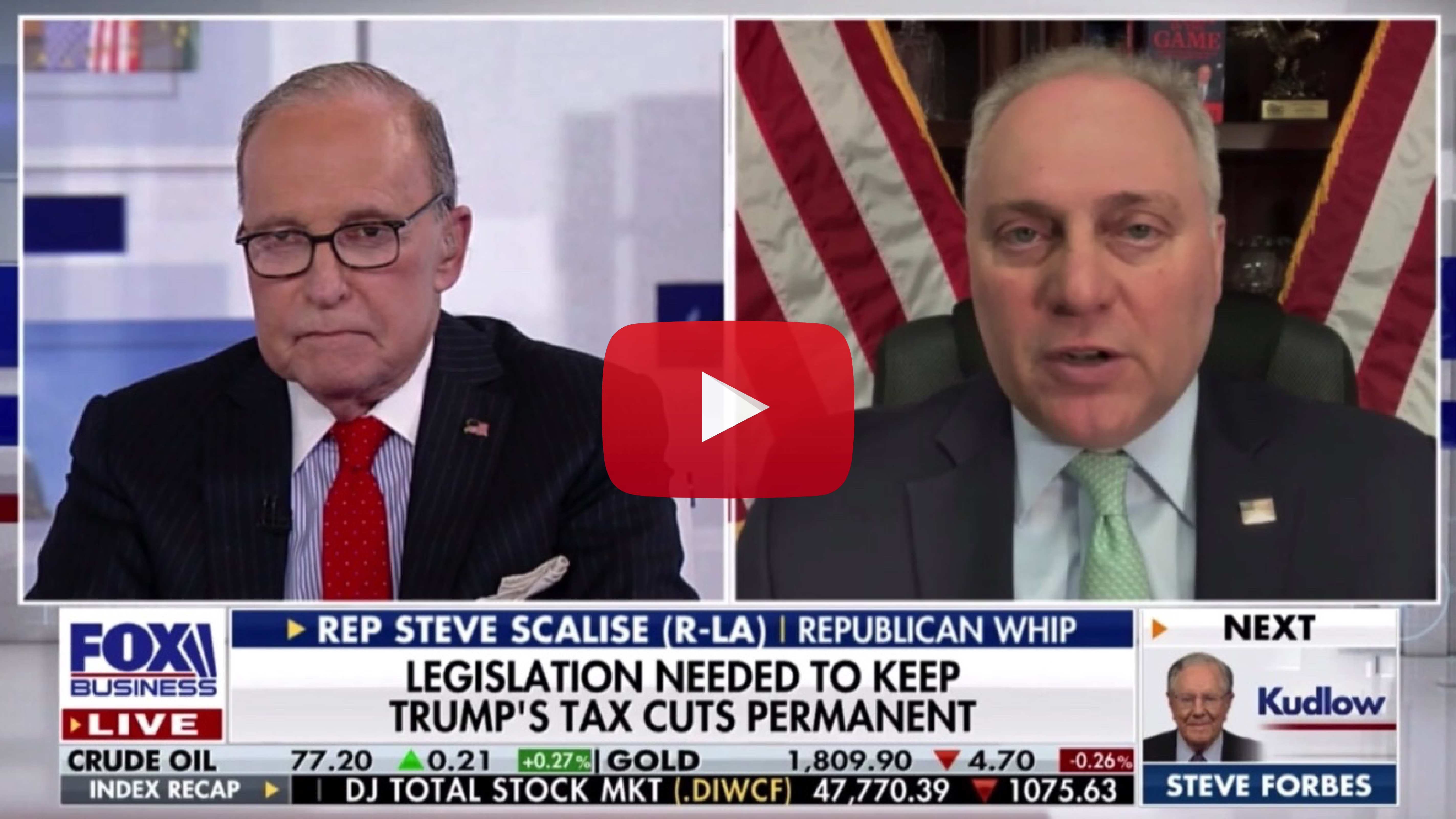 Click here or on the image above to watch the interview.
On House Democrat retirements:“Larry, [25 House Democrats not seeking re-election this year is] not good for Democrats, and I think that number is going to get even larger as the months go by. And people in Congress realize that they are so out of touch with mainstream voters. And you saw it in Virginia, you saw it in other states, people don’t want big government socialism, and yet that’s what Nancy Pelosi and Joe Biden [have] been pushing.“What you also need to look at, Larry, is a lot of these swing district Democrats – you know, look at Ron Kind in Wisconsin – where we’ve got a great candidate in Derrick Van Orden who was out-raising the incumbent Democrat. And that’s when the Democrat announced he wasn’t going to run again. You know, look at Charlie Crist down in Tampa, Florida, who said he’s not going to run again. And everybody expects that seat can flip to Republican, just like Stephanie Murphy, who just announced the other day she won’t run again in the Orlando part of Florida that people think [would] flip Republican.“So, there are a lot of areas that are trending our way. We’ve got great candidates, Larry. That’s where it starts. And then you look at the way people are not liking the far-left movement – the shutting down the schools, shutting down of the economy – all the crises, open borders, spending trillions of dollars, driving up inflation. You’ve been highlighting a lot of these things on your show, but voters across the country are recognizing it too, and don’t want this big government socialism that [Speaker] Pelosi and [President] Biden are selling.”On the American people rejecting Democrats’ socialist agenda:“[The large number of House Democrats retiring is] clearly a leading indicator [of a red wave.] When you see retirements – especially in swing districts – it worked against us in 2018, even though we had an incredible economy with President Trump, the work that you did in the White House, getting the hottest economy we [have] ever seen. Yet, history shows the first midterm of any new president doesn’t go well for the sitting party. And it didn’t go well for Republicans when we lost the majority in ’18, but we had a lot of retirements in swing districts leading up to it. “The Democrats are seeing that same leading indicator. And by the way, this history repeated itself in 2010. You know, you saw [Nancy] Pelosi [as Speaker of the House of Representatives] with Barack Obama as President in 2009, and they [passed] a very far-left agenda then and lost the House in the Tea Party wave of 2010. By the way, another [leading] indicator: Back in 2009 – before the Tea Party wave of 2010 – the state of Virginia went from Democrat to Republican. And we flipped it again this time, right before the midterms.” On House Republicans’ bold agenda heading into the new year:“You know [Ways and Means Ranking Member] Kevin Brady very well. [Ranking Member] Brady was the author of the Tax Cuts and Jobs Act, which got our economy going by cutting tax rates and making America competitive again. [The Tax Cuts and Jobs Act] rebuilt America’s middle class that was going away. Joe Biden, by the way, is running our middle class out of existence again with people being paid not to work and jobs going to foreign countries again. Let’s bring those jobs back. Making the tax cuts permanent would do that.“But we’re working very hard on that type of bold conservative agenda. You know, we’ve talked to [former Speaker of the House of Representatives] Newt Gingrich a lot because the [Contract with America] energized a lot of people around the country behind [conservative] ideas. “Look, we could probably win the majority back just [by] pointing out how bad the Democrats are with this big government socialism. I want to create a mandate. I want to actually have an agenda that people can get excited about [and have them] say, ‘Yeah, their ideas are really, really bad on the left. But let’s move on a bold conservative agenda.’ And that’s what we’re going to be rolling out in the months ahead. You’re going to be excited about it. And, I think a lot of swing voters are going to be excited about it too.”