WASHINGTON, D.C. — Today, House Republican Whip Steve Scalise (R-La.) joined Fox Business Network’s Mornings with Maria to discuss how President Biden and Congressional Democrats’ far-left tax-and-spending spree will be disastrous for the American people. Whip Scalise highlighted that Democrats have attempted to vote for their big government socialist bill five times, but cannot even find consensus from within their own party to pass the legislation. In addition, Whip Scalise called out President Biden for refusing to meet with House Republican Leadership and for leaving a massive carbon footprint in Europe. 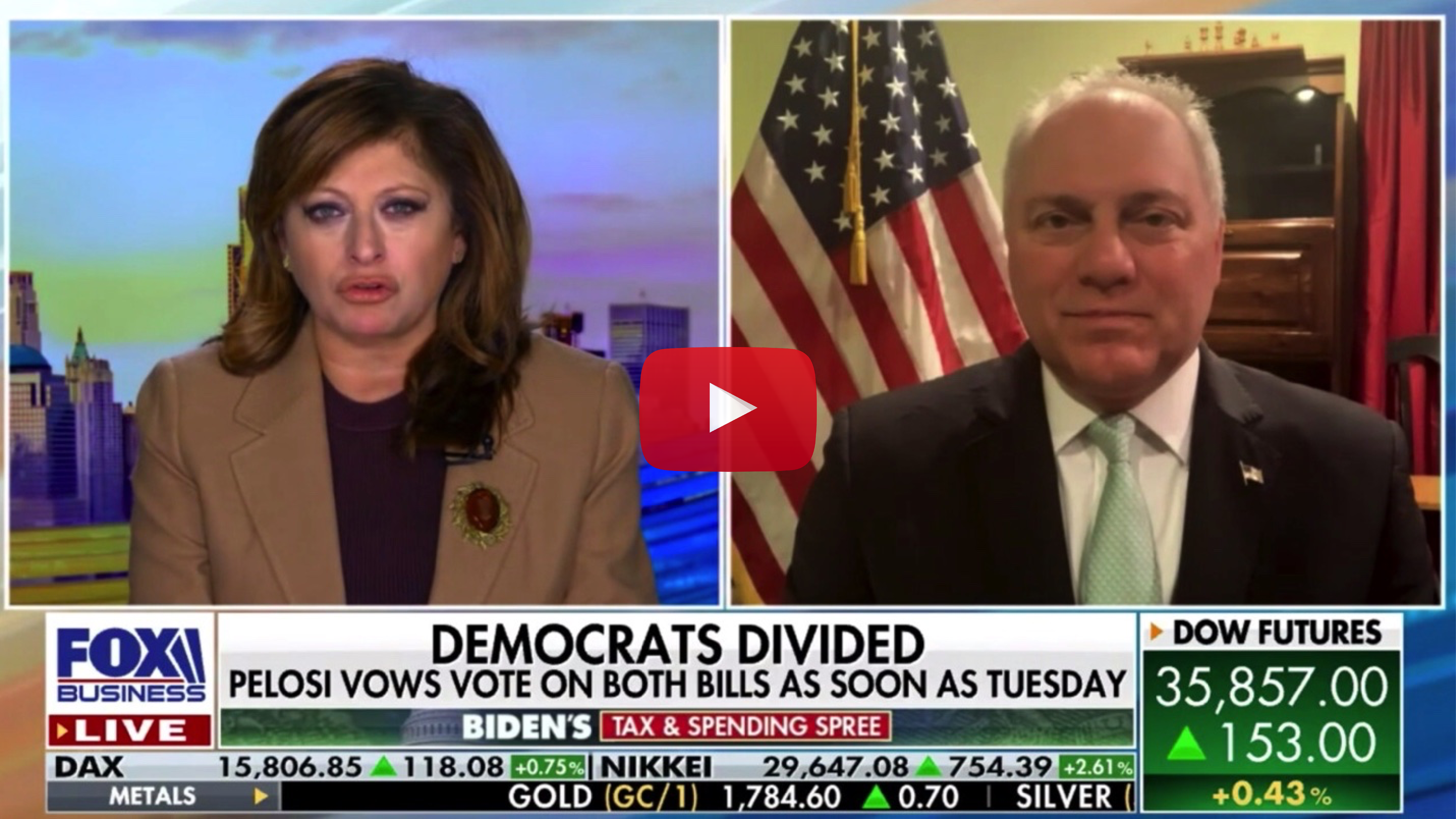 “Well, tomorrow would represent the sixth different time that Nancy Pelosi has promised a vote. I still think, like the other five, they’re going to blow by it because they don’t have the votes. And, if you look, I mean, the Democrats in Washington right now have an insatiable appetite to spend trillions and trillions of dollars [of taxpayer] money. But, what they’re seeing is the voters are revolting against all this big government socialism because it is the leader of inflation. People are tired of all the inflation. [They] already know that trillions more in higher [taxes leads to higher prices at the] grocery store everywhere else. And so, on the heels of this Virginia election, I think they’ve got real trouble getting the votes because they really don’t have a package to rally around.”

On how Democrats’ inflationary spending is hurting low-income and middle class families:

“Well, the far-left progressive socialists are running the show, but they’re not getting everything they want because Democrats in swing districts are realizing if they vote for this they can’t go back home and explain it on top of all the trillions in spending they’ve already voted for because their voters are furious with all the spending because they know that’s what’s driving the inflation.

“And these are 1970s-era numbers. I mean, when you see gasoline over 40 percent higher. People are paying over five dollars a gallon in some places, and it keeps going up. When you look at what’s happening at the grocery store, you’re paying 20 percent more for bacon. Those prices keep going up if they keep spending more money. And so, the real answer is [to] stop spending money and just focus on getting back the economy, secure the border, [and] do your basic job. The debt ceiling is about to be hit again in just a few more weeks because they keep maxing out the credit card, and their answer is, ‘Raise the limit, go get a few more credits [cards].’ People are looking at them [and are saying], ‘This is madness! Stop this crazy spending.’”

“Those are devastating numbers for President Biden because it really goes to his credibility, and in terms of the ability to deliver anything. [President Biden’s] competence has become a real problem. When you actually poll the competence of President Biden after Afghanistan, and so many other failures domestically, people have lost faith in this President’s ability to do the job and [follow] through on his promises.

“And remember, he ran saying that he would work with all parties he would bridge the divide. He’s still yet to even meet with House Republican Leadership 10 months into his presidency. And, the negotiation you’re seeing right now in Washington, it’s [not a] negotiation between Republicans and Democrats. It’s a negotiation between far-left big government socialists and liberals. And the moderates aren’t involved, and the Republicans aren’t involved in these negotiations. And you wonder why people are looking going, ‘Hello, are you talking to anybody in the real world when you’re having these negotiations?’ And, unfortunately, they’re not.”

On President Biden not meeting with House Republican Leadership during his first term:

“He’s yet to have a single meeting with House Republican Leadership, and look in in President Trump’s term, in his first year, he met multiple times with all leadership – House, Senate, Republican, Democrat – multiple times to talk about issues.

“Again, they’re about to run up on the debt ceiling again in just a few more weeks… They’re not meeting with anybody on that deadline. The deadline’s December 3rd.”

On President Biden and other world leaders using private jets to attend their international climate conference:

“He’s off in Europe right now telling people to wreck America’s economy. You know, they’re all flying jets. Look at the carbon footprint of this Glasgow Summit where they’re talking about global warming, and all of them are flying over there on jets. They could have Zoomed this thing in. They’re telling your kids that your kids can’t go to school in person because the union bosses want that, but then they’re going to all fly on private jets, and you know big jets, to go tell people to stop using fossil fuels because it’s destroying the planet. And, China the world’s biggest emitter of carbon, is exempt from all this stuff. They’re not participating. They’re laughing at the United States and the rest of the world.”