WASHINGTON, D.C. — Today, House Republican Whip Steve Scalise (R-La.) joined Fox Business Network’s Mornings with Maria to discuss how President Biden’s weakness on the world stage resulted in Vladimir Putin’s violent invasion of Ukraine. Whip Scalise slammed President Biden’s anti-American energy policies and pointed out that the United States continues to purchase millions of dollars worth of oil from Russia while the Biden Administration claims to stand with the people of Ukraine. In addition, Whip Scalise emphasized that families, workers, and small businesses are suffering from President Biden’s self-made crises and that the American people can expect more deflection and diversions from President Biden in his State of the Union Address tonight. 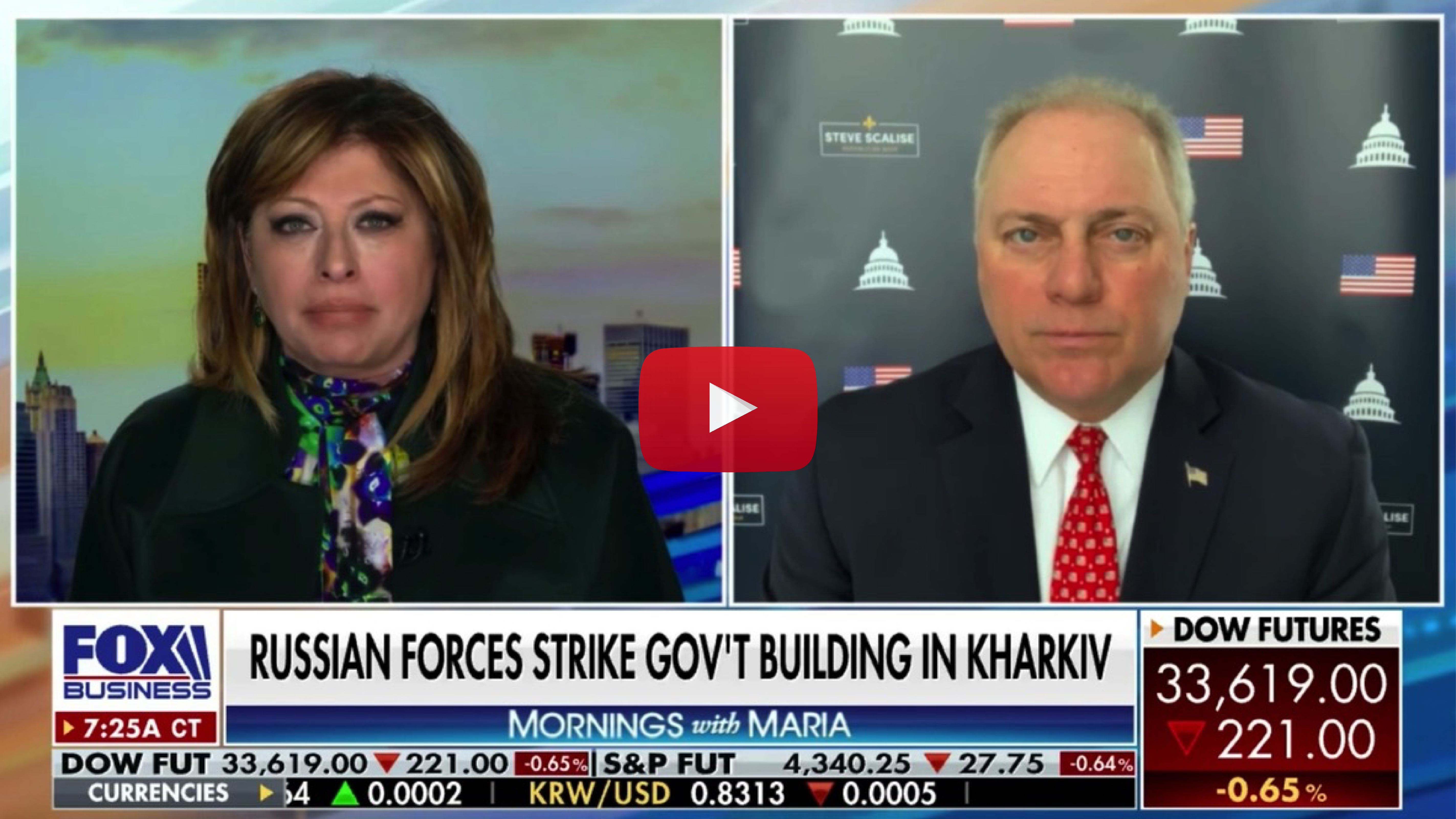 On President Biden’s failure to protect Ukraine:“Look, what President Zelenskyy has done, and the people of Ukraine have done, I think, they’ve inspired all of Europe and all of the world. Everybody who believes in freedom and people that just wanted [to] defend themselves, the way that they’re doing it so bravely, pushing back against Putin and, under a mass assault, is something that we all should support, not just appreciate and applaud, but support. [President Zelenskyy] needs assistance. He needs additional help. You know, I’ve talked to some people in parliament over the last few days [and] some other military leaders about things that they need. They asked months ago for stinger missiles, for example, so they can have surface-to-air capability. You wouldn’t see all this carpet-bombing right now if President Biden had given [Ukraine] that aid eight months ago.“But in the meantime, we’ve got to get them everything that we can now, but something else we need to do, Maria, and you and I have talked about this, we’ve got to cut off Putin’s financing of this war. And a large part of that is oil. That frankly, President Biden gave [Putin] leverage by cutting off the spigots in America. There are many specific actions that I’ve called on President Biden to reverse, things that President Biden did in the last year, that have given Putin more leverage. And by the way, with oil over $100 a barrel now, if we could reverse some of these things, it would take money out of his pocket. He’s probably making [an additional] $60 billion for his war efforts against Ukraine by a higher price of oil. It’s time for President Biden to step up and open up American energy. If for no other reason than to undermine Putin’s leverage and [take] away his financing capabilities that he’s using to fund this war.” On President Biden’s war on U.S. energy:“Maria, this is insane. And this is where we need to be calling out the [Biden] Administration. Again, President Biden is acting like he’s supportive of Ukraine, that he’s standing up to Putin – he hasn’t stood up to Putin – he’s handed Putin the checkbook, the financing tools to fund this war! Look, just a few weeks ago, President Biden put a ban – a freeze on all new oil and gas permits. All of them. This is after the federal courts pushed back on his cost of carbon limit of federal lands ban that he put in place. He went even wider with it. We’ve got to call him out.“I’ve called him out to reverse these policies immediately. You don’t support the people of Ukraine if you’re funding the guy Putin who is invading Ukraine if you’re funding his war, which you’re doing by importing oil because he shut off American energy. Open up American energy. They keep talking about carbon. What’s the carbon footprint of this war? What’s the carbon footprint of Russian oil? It’s higher than American oil. We actually have better standards. We should be making all of our energy and exporting to our friends and not taking in [oil] any from Russia.” On the need to reverse the Biden Administration’s anti-American energy policies: “Look, we should be standing up to Putin. I’ve called on President Biden to reverse all of his anti-American energy policies and stop relying on Putin. If any of your [strategies] as [President of the] United States involves, ‘Vladimir Putin, will you help us fill in the blank?’ You should end the sentence, and change it, and say, ‘We don’t need Putin anymore. We’re standing up to him.’ And we’re going provide not only our own energy – we’re going stop important Russian oil – but we’re going to supply our allies around the world with oil and natural gas, so they don’t have to get it [from] Putin. Do you know that [the Biden] Administration has not even approved a pipeline, an LNG export permit, in the last year? They’re sitting on the shelves, ready to go. [If Biden approved an LNG export permit, the United States wouldn’t] need Putin’s energy, and Europe [wouldn’t] need Putin’s energy.” On the Biden Administration’s burdensome regulations on small businesses and energy companies:“We’ve called on President Biden, by the way, through the Federal Reserve, Treasury, and [Securities and Exchange Commission] to reverse those policies where they are going after energy companies. All of this has to change. The state of the union is in disarray because of President Biden’s policies. I hope he talks about reversing it tonight. I don’t think he will because he doesn’t get it. He doesn’t care about the things that are hurting hardworking families. That’s what he should be focused on. And stand with Ukraine by taking away Putin’s leverage.”