Whip Scalise also blasted Speaker Pelosi for her decision to keep the House of Representatives on the sidelines, instead of coming back to D.C. to lead by example and work on behalf of the American people on priorities such as holding China accountable for lying to the world about Coronavirus. 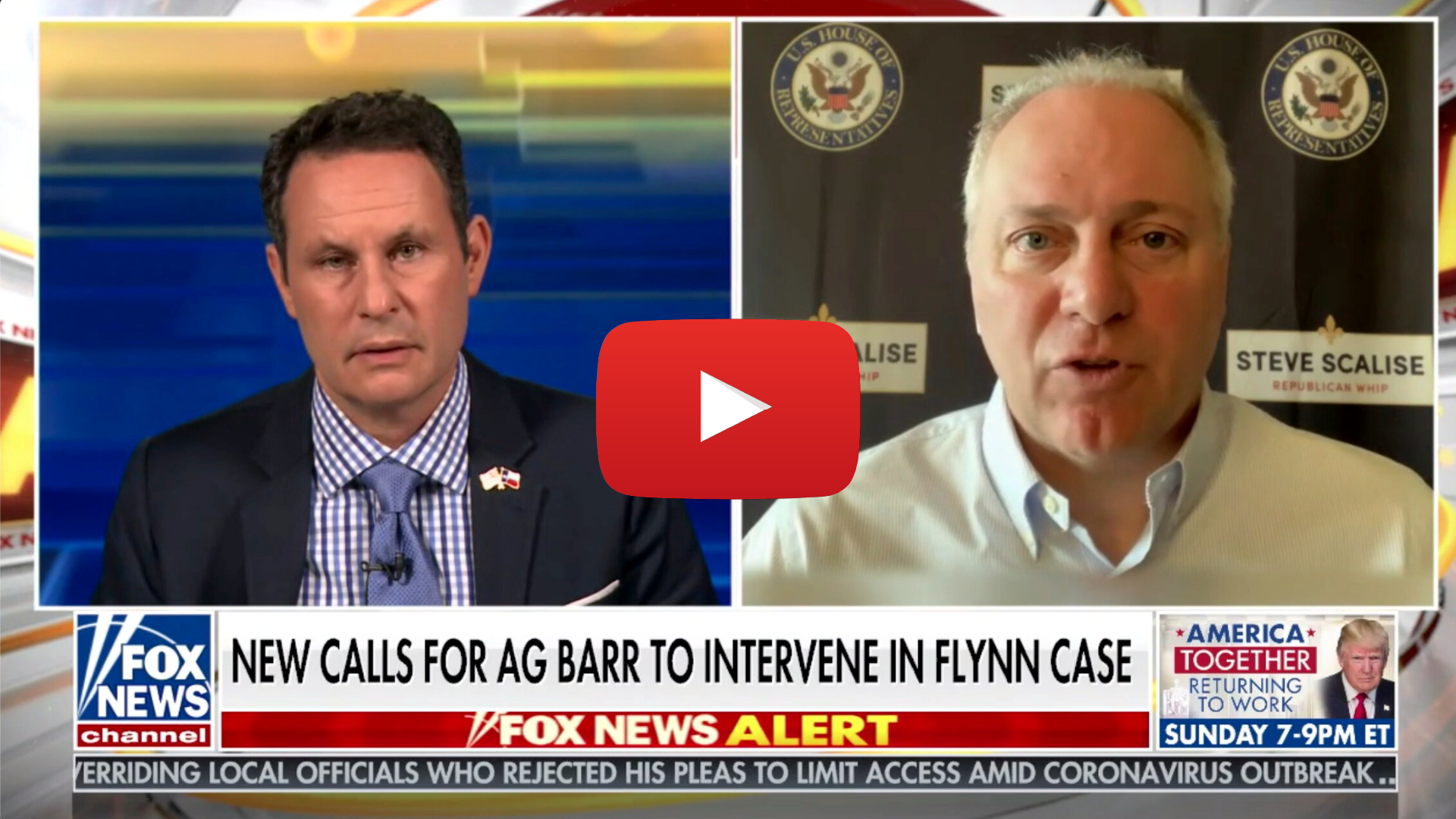 On abuse of power at the FBI under James Comey’s leadership:

“Brian, the thing that sticks out the most is that the FBI was getting ready to close the case and then Peter Strzok came in and we all know his motivations. He was a strong anti-Trumper. He had motivations against Donald Trump, not as a cop trying to find out facts. And he went and pushed to keep this thing going because it turned out, you know, you saw it, he, Strzok and [Lisa] Page both, who were dirty cops from the beginning, were trying to get Flynn to entrap himself it looks like. It looks like they were literally trying to set a trap for him, as they say. Well, they wanted him to either lie so that they could get him fired or get him indicted.

“I mean, they had a motivation against Trump and against Flynn, even though the evidence didn’t show that they should move forward. He’s the one who pushed to do it anyway because he had anti-Trump motivations. That’s not the kind of person you want with a badge. That’s what the definition of dirty cop is all about. I want the Attorney General to look into this and, frankly, people ought to go to jail, and he would be at the top of the list.”

On the need to hold bad actors accountable for their misconduct:

“Well, it’s not that [General Flynn] was intimidated. It’s that he was set up. I mean, my goodness, when you’ve got FBI agents on record, I mean you’ve seen some of the documents already. Oh, and, by the way, remember, it was Strzok and Page who were going back and forth during the presidential election saying – they were setting up an insurance policy to stop Donald Trump from getting elected President. I mean, you’ve got FBI agents trying to plot against a candidate for President of the United States. That should disturb everybody, Republican and Democrat, and Independent alike. They’re dirty cops and they ought to be held accountable and go to jail.”

On ensuring the trillions of dollars already appropriated by Congress is spent appropriately before bailing out states who faced deficits before COVID-19:

“Well, did [Speaker Pelosi] forget that Congress literally just sent out $150 billion to states just last week? Most of these states just got the money, haven’t even started spending it yet and she’s talking about giving them more money? For goodness sake, I mean, there are trillions of dollars out the door. We’re trying to help families and small businesses hang on right now. And it seems like the only state she’s interested in helping are those states that had multi-billion-dollar deficits before COVID-19. We ought to be spending our time making sure that the trillions we sent out the door are being spent properly, and helping those small businesses stay afloat and those families stay afloat so that they can have jobs to come back to when we start opening the economy soon. And we need to start opening up the economy in a safer way as we are doing this right now.”

On Speaker Pelosi’s failure to bring the House back to work on behalf of the American people:

“I’ve been very vocal when Speaker Pelosi canceled votes that we were going to have next week, that she shouldn’t be afraid of bringing members back. We just went back to D.C. last week to vote on the next round of relief package for the Paycheck Protection Program. It went smooth. You didn’t see major incidents. And, again, the Senate’s going to be in next week. Is there some reason why Nancy Pelosi doesn’t think the House should be working as well? You know, there’s ways to do this safely. Congress, by the way, should be leading. Congress shouldn’t be the last people to come back. We should be the first to come back safer, showing those safer protocols and getting our job done. And holding China accountable too, by the way, Brian.”

“Congress needs to be having hearings right now and holding China accountable.”