WASHINGTON, D.C.—House Republican Whip Steve Scalise (R-La.) joined House Oversight Committee Ranking Member Congressman Jim Jordan (R-OH) to call out House Intelligence Committee Chairman Adam Schiff (D-CA) for trying to claim he has been running a fair process despite news today that he directed a witness not to answer questions from Republican Members of Congress within the hearing room.

Whip Scalise also blasted Democrats’ upcoming attempts to legitimize a secretive, Soviet-style impeachment process that for the past several weeks has been completely rotten to the core. The American people are being denied access to the truth and the facts of this case because Speaker Pelosi is so determined to impeach a sitting President behind closed doors. 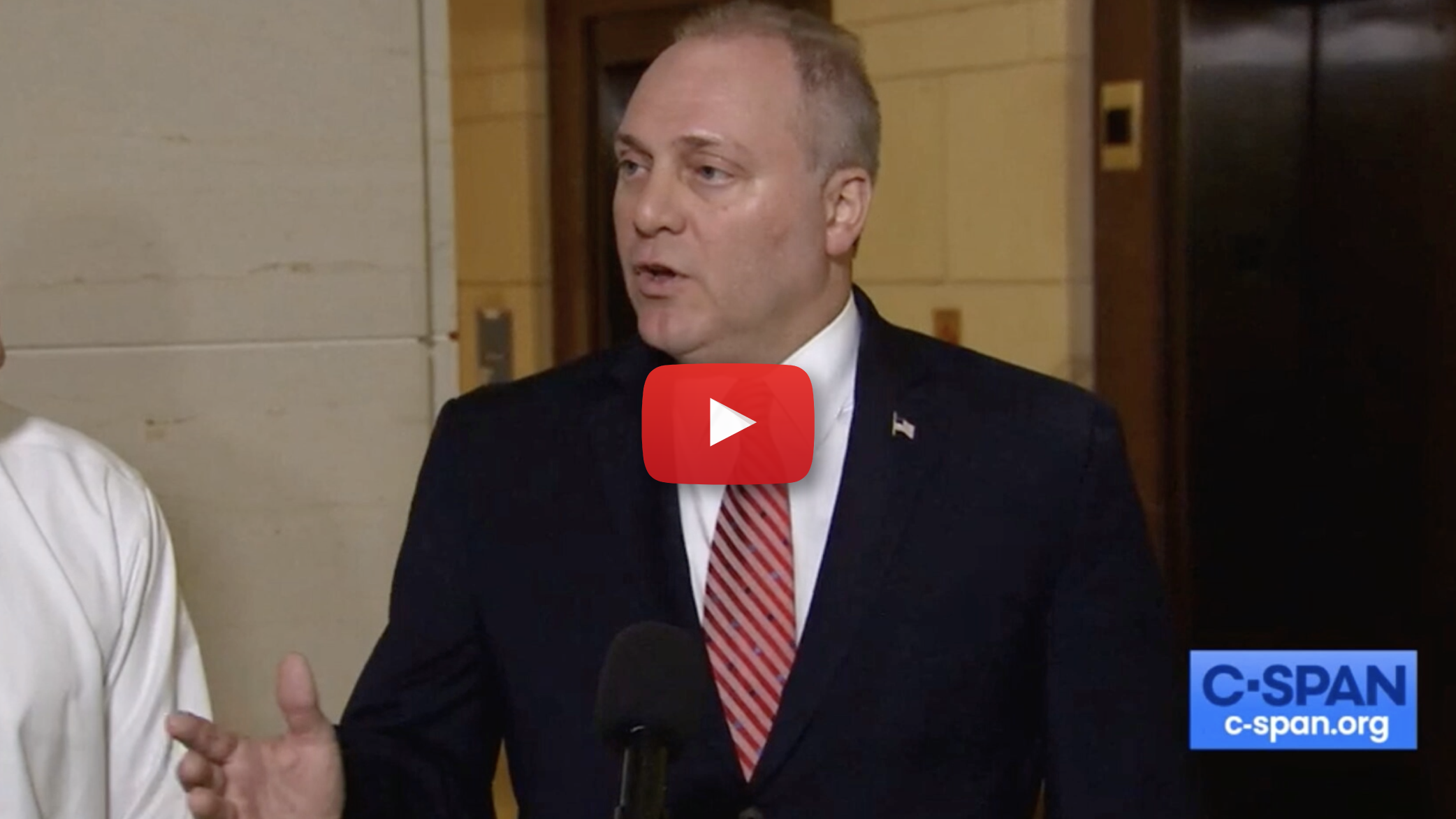 “The Soviet-style process that Speaker Pelosi and Adam Schiff have been conducting behind closed doors for weeks now has been rotten to the core. We’ve been highly critical of the fact that it completely denies due process to Republican Members of Congress, as well as to the White House. And so, as we’ve continued to call on a completely different process, Speaker Pelosi internally has been having her own struggles with her Members who recognize that this has become a growing problem for her caucus as they’ve been so fixated with impeachment, they’ve not been addressing the problems of this country, and their Members are starting to hear more and more back home that people are disgusted at what they’re doing and how they’re doing it. And so today, [Democrats] filed a resolution. And the resolution that was filed today, in and of itself according to Speaker Pelosi, affirms the Soviet-style process that’s been going on, and continues to deny due process and equal access to both sides until Adam Schiff is completed with his secret meetings. In fact, it continues to deny the White House an opportunity to participate in this process. And so, as all of this is going on, there have been new developments today that Jim Jordan’s going to talk about that sink to an even lower point in terms of Adam Schiff trying to run a one-sided, Soviet-style process that we’ve never seen before. This isn’t like Benghazi, this isn’t like anything else. This is an impeachment inquiry. And in fact, Speaker Pelosi’s resolution confirms that it’s an impeachment inquiry, yet every other impeachment inquiry we’ve had in the history of our country – all three – have allowed both sides to call witnesses, have allowed the White House to participate. That’s not happening right now. In fact, not only is it [not] happening but I think it’s important for Jim Jordan to note what just started happening today in this committee where they’re trying to impeach a President behind closed doors without any due process.”

“Adam Schiff, among many things, has been trying to claim that this is a fair process by saying that Republicans are allowed to ask questions. Now he gets to choose all the witnesses, and him and himself only, which means it’s not a fair process on the face. But even his claim now that Republicans can ask questions has been undermined because now he’s directing witnesses not to answer questions that he doesn’t want the witness to answer if they’re asked by Republicans. He’s not cut off one Democrat, he’s not interrupted one Democrat and told the witness not to answer Democrat Members questions, but today he started telling the witness not to answer questions by certain Republicans. That reeks and by the way, if you want to talk about a Soviet-style process – again, that might be what they do in the Soviet Union – not in the United States of America, we can’t stand for this. The American people are being denied equal justice.”

“It’s clear [Speaker] Pelosi needs to declare a mistrial. This has been a tainted process from the start. What happened today confirms, even worse, just how poorly Adam Schiff is handling this process and denying the ability for Republicans to even ask basic questions that are critical to the heart of whether or not a President of the United States is impeached. This is, by the way, something that [Alexander Hamilton] himself warned against when he was writing in the Federalist Papers expressing concerns about how Congress would handle impeachment. This is exactly what he talked about – this stinks to high heaven, this shouldn’t be allowed – not in the United States of America.”