WASHINGTON, D.C. — Last night, House Republican Whip Steve Scalise (R-La.) joined Fox News Channel’s Jesse Waters Primetime to discuss how Democrats’ far-left agenda is wreaking havoc on American families, workers, and small businesses. Whip Scalise called out President Biden and Representative Ocasio-Cortez for attempting to distance themselves from the inflation, border, and crime crises that their socialist policies have created. Whip Scalise urged the Biden Administration to reverse its efforts to re-institute mask mandates on airplanes and emphasized that the American people want freedom, not the government controlling their lives. 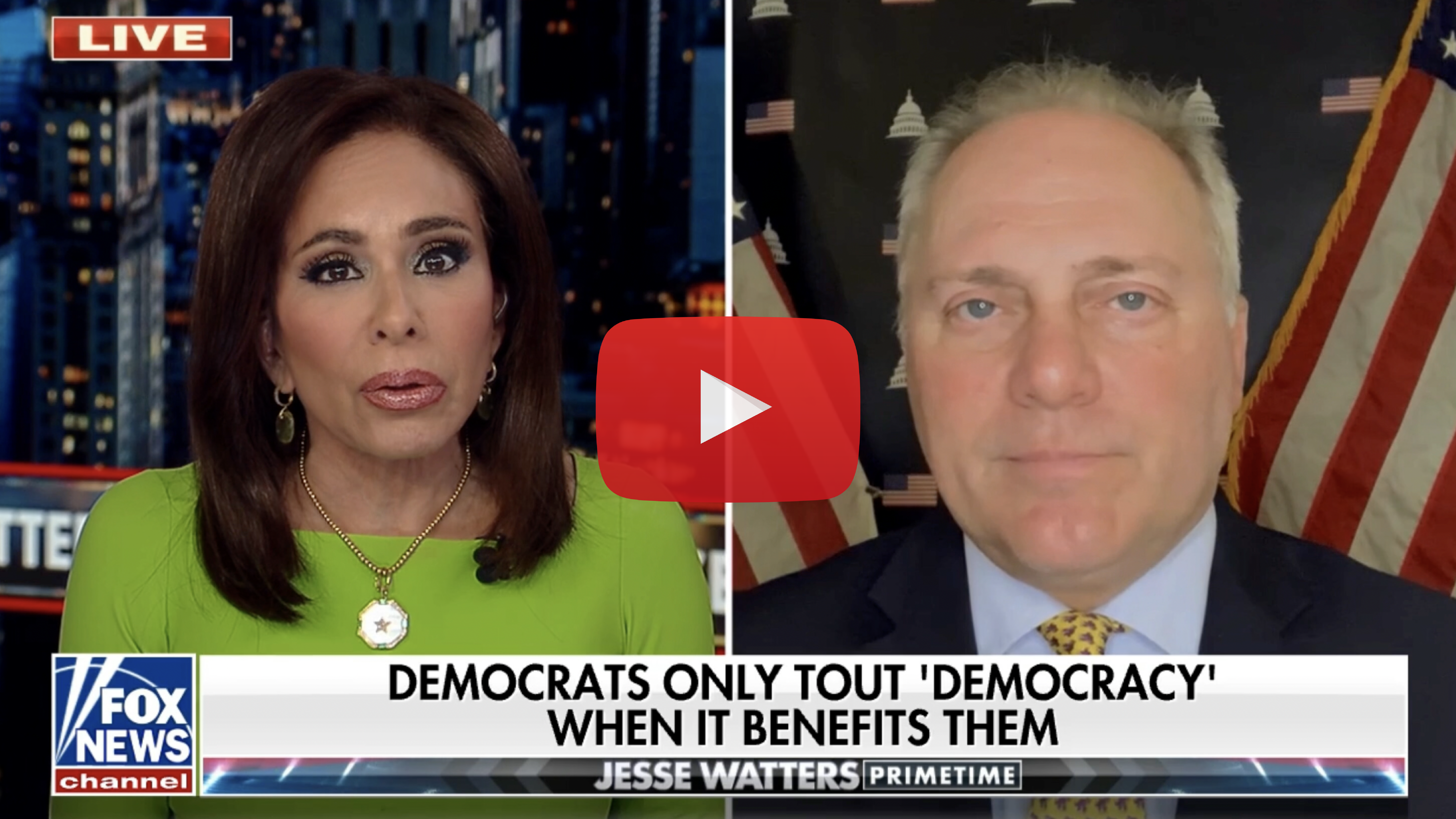 Click here or on the image above to watch the interview.
On the American people rejecting Democrats’ push for big government socialism:“Judge, what they are scared to death about, especially these big government socialists led by [Representative Ocasio-Cortez], is losing power. Look, they have run this country for the last two years into the ground. There [are] fires all over the world. But if you look at America – inflation crisis, high gas price crisis, border crisis, crime running rampant, let alone what they have done on foreign policy and those debacles from Afghanistan to Ukraine – so, they don’t want to lose power. “But they know the country is fed up with their big government socialist push to the left, and that’s why you are going to see this huge wave in November of people saying, ‘We want to take our country back,’ just like they did in last November in Virginia where they said, ‘We want to take our country back,’ because parents want to be involved in kids’ education.“Those are the kinds of issues that people care about. Democrats want to talk about January 6th every day because they don’t want to talk about the inflation and the high cost of everything that they have created with two years in total [control] of Washington.”On Democrats attempting to distance themselves from their self-made crises:“Well, [President Biden is] letting the big government socialist drive the agenda. You know, [Representative Ocasio-Cortez], [Senator] Sanders, they are the thought leaders of the Democrat Party, and they’re driving things. They were pushing defund the police. Now they want no cash bail. They want to let people out if they are violent criminals. And you are seeing it destroy big cities. You are seeing it run people out of big cities. Look, there [were] like a million people that left the state of New York last year. Many of them [are] moving to states like Florida. They are seeking freedom, and they are seeking an escape from the socialist states. They don’t want to see the country run like a socialist nation.“And that’s really what this fight is about. That’s what November’s election is going to be about. Do you want freedom, or do you want big government socialism? But if you look at the mask mandate – I mean, for goodness’s sake, you know, the courts finally said, ‘Enough with CDC [overstepping] their boundaries. You can actually fly on a plane with or without a mask. It’s your choice.’ And [President] Biden appealed that because [the Democrats] want government control. They don’t want to let go of control.”On the Biden Administration’s efforts to bring back mask mandates on airplanes:“Freedom actually works. [Democrats] don’t believe in it. They don’t want people to have freedom. But people want freedom. And they yearn for it in Ukraine. And they sure yearn for it in America, and when they see it taken away, they really, really do get loud.“And you’re seeing it in school board meetings across the country. You are seeing it in elections, where the big government socialists are losing to people that choose freedom. I choose freedom as you do as well. But it works. Stop trying to ruin it here in America.”On Democrats’ efforts to restrict freedoms protected in the Bill of Rights:“They want to get rid of the First Amendment, the Second Amendment. It just goes right down the line. People are fed up with it. They’re fed up. And that’s why we are going to take our country back. Starting in November with the House, ultimately getting the White House in ’24.”