Additionally, Whip Scalise highlighted that the Biden Administration’s wasteful spending has led to a drastic increase in inflation and urged President Biden to abandon his reckless $3.5 trillion tax and spending spree because it will send jobs overseas and raise taxes on hard-working American families. 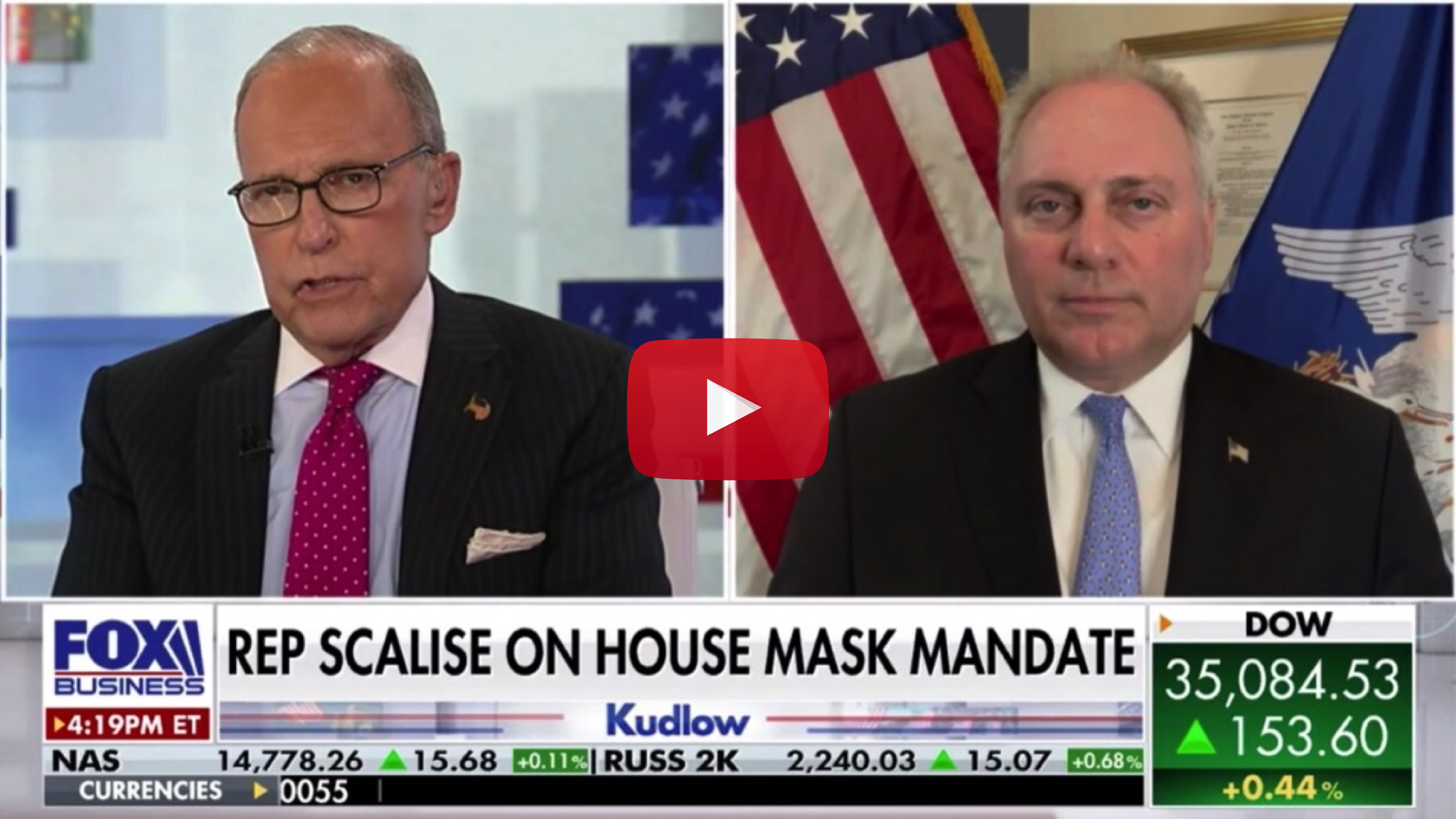 “Clearly, Speaker Pelosi is trying to take [freedom] away. I mean, think of the lunacy that Speaker Pelosi is trying to get people that come to the United States Capitol on the House side arrested if they’re vaccinated without a mask. Yet, they can go to the Senate side without a mask and not get arrested. I guess maybe COVID knows that it needs to stop when it gets close to the Senate Chamber. This makes absolutely no sense.”

On President Biden’s COVID super-spreader crisis at the southern border:

“And Larry, the irony, think about this: They’re trying to say they’ll arrest you if you’re vaccinated without a mask on in the United States Capitol and an American citizen. Yet, if you come across the border illegally right now through Mexico, illegally with COVID, they’ll let you in, they’ll give you an airplane ticket for free and put you on a plane with COVID and send you to some unknown state around the country. We’re clearly seeing super spreaders right now at our border with both the delta and lambda [variants] of COVID. This is out of control. The Biden Administration created this mess, not only a border crisis, now a super-spreader crisis at our border.”

On Speaker Pelosi’s order to arrest American citizens not wearing a mask in the U.S. Capitol:

“It’s childish games. But it’s dangerous because this is the seat of democracy. This is the People’s House. And like you said, it’s not like they’re doing this in the entire United States Capitol or all across America. Clearly, it’s coming from Speaker Pelosi because the edict to arrest people only if you come into the House. If you go into the Senate without a mask, there’s nothing wrong with that. And again, it’s the same building. So people I think get what’s going on here. Look, first, Speaker Pelosi put up fences, with barbed wire, to keep the public out. Now they finally took that down, and just as people are kind of, you know, tourists come back in to see their government in action. They want to now threaten to arrest them if they don’t have a mask on, only if they come to the House side. This has got to end.”

“Well, you know, we’ve always been for infrastructure going back to when President Trump was in office. As you know, we tried to work to get a bipartisan infrastructure deal that was paid for, and President Trump wanted to do that too. Speaker Pelosi didn’t. But if you fast forward to today, Speaker Pelosi only wants to bring an infrastructure bill to the floor if it’s tied to massive trillions of dollars of new taxes and new spending on things that have nothing to do with [infrastructure], like the Green New Deal, that would destroy our ability to make things, it would destroy our middle class in America, as well as things like unionizing health employees. What does that have to do with infrastructure? Yet, they’ve tied all of it together. So, we’ve been working to try to keep that whole crazy idea of socialist policies away. Unfortunately, they’re tied together right now.”

“Larry, I’m working very hard, not only on the Republican side as the Republican Whip, we’ve got all House Republicans against any plan to raise taxes, including through something that they call infrastructure that really isn’t. But we’ve been working with a lot of other people who don’t want to see taxes go up because they know it will hurt the middle class. It’s going to hurt hardworking families, and it’s going to be one of the many things that [increase] inflation. We’re already seeing inflation. If you spend trillions [of] more dollars, it will only make inflation worse.”

On Speaker Pelosi’s razor-thin majority in the House of Representatives:

“So, we’re trying to get, right now, if you look at the makeup of the House, there’s only a three-vote majority probably between now and November. Pelosi will only have a three-vote majority because of special elections. That means she can’t lose more than three people. And right now, I think there are more than three Democrats that are against it. That obviously can change. We’ve got to keep the pressure on people.

“If you’re living in a district that’s represented by a Democrat right now, this is the time to be calling your Member of Congress and say, ‘No new taxes. Don’t vote for anything that’s going to hurt the economy; that’s going to hurt middle-class families.’ And tax hikes will. Keep in mind, Bernie Sanders is the Chairman of the Senate Budget Committee. Do you really think he’s going to bring a bill to the floor to raise taxes that is not going to affect hard-working, middle class families? Of course, it will. We need to try to defeat it.”

On the Biden Administration’s self-made border chaos and COVID crisis:

“Look, we’re going to continue to press President Biden. He created this mess at our southern border. He can fix it. But as he’s contemplating mask mandates and things that would shut America’s economy down, he’s helping create that crisis at our border by bringing COVID into our southern border. So we’re calling on him and the CDC. I’ve talked to the head of the CDC and said, ‘Look, you issued mandates, if you’re an American citizen in Mexico this summer going on vacation, you can’t come back home to America and get on a plane, unless you show a COVID negative test. They won’t even let you on a plane. Yet, you could come across our border illegally in Mexico with proof that you’re COVID positive, and they’ll let you in. Y’all have to put out guidance at the CDC level to stop this.’

“And also, President Biden can stop it himself today. People need to get vocal about this because it’s going on, and it’s spreading throughout America. They’re not just coming across the border and staying in Texas. The Biden Administration is sending them all throughout America, and they’re not even telling states. You’ll see, somebody going to show up, a busload of people that are COVID positive from another country in South or Central America, maybe a Middle Eastern country, somebody that’s on the Terrorist Watch List, which we’ve caught, maybe close to 10 people, they’re already coming across our southern border illegally. It’s out of control.

“Every town is a border town right now with [COVID-19] being spread throughout the country by the Biden Administration.”