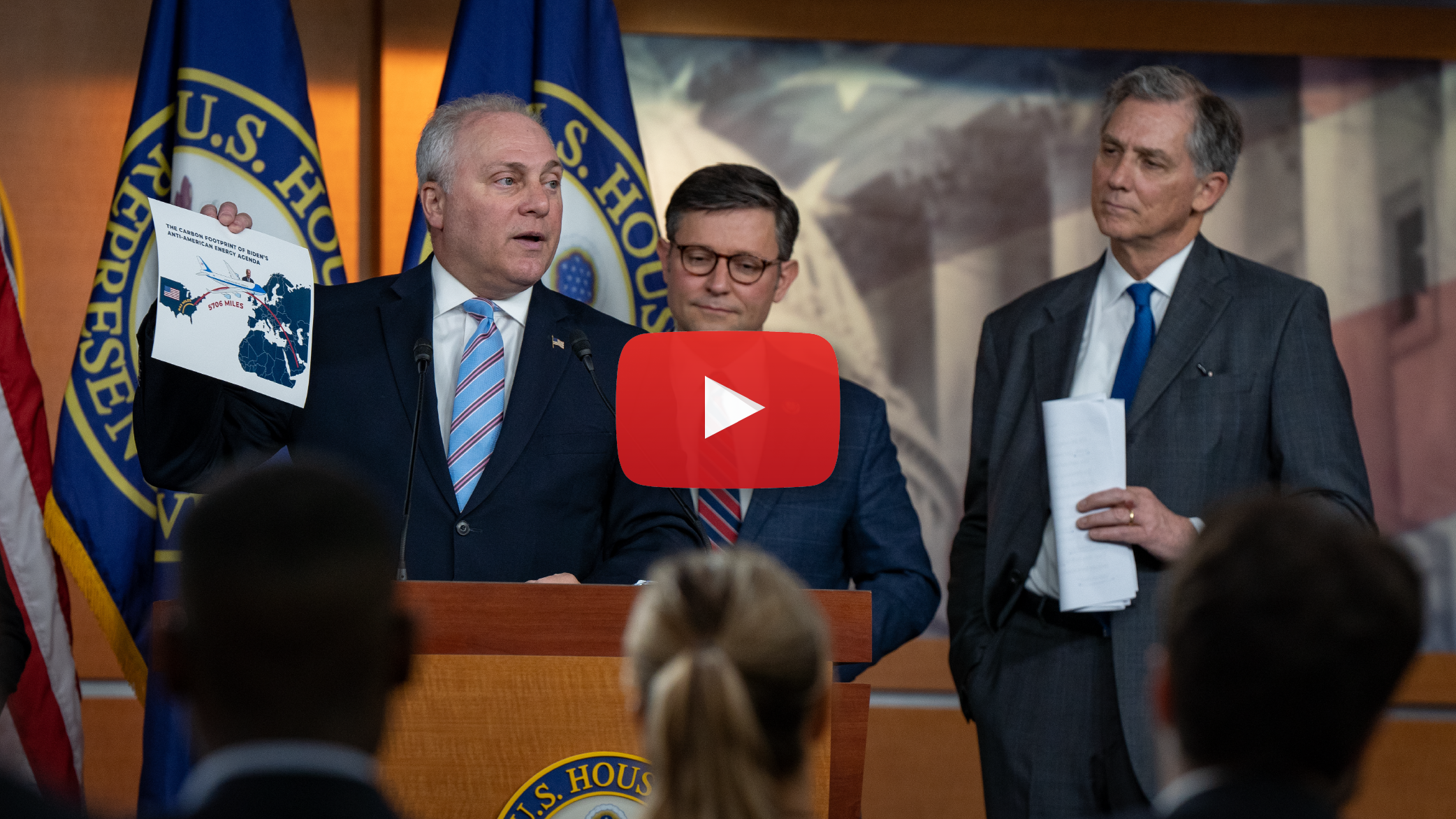 “President Biden’s inflation-increasing agenda is crushing the American Dream for millions of families across the country. We’ve heard some of the stories. Families are already talking about canceling their summer vacation, not just because of the inflation, but because they can’t even afford to fill their gas tank because gas prices are so high, more than double where they were when [President] Biden took the oath of office.

“If you look at all of the different crises that we’ve been talking about for the last year and a half that have been added on to, and created by this President – from inflation to high gas prices, to the border crisis, to crime that’s running rampant throughout our country, let alone the foreign policy debacles that we’ve seen over and over again – it’s costing families thousands of dollars more.”

“Just think about this. Last week, the House Natural Resources Committee, which is the committee that has jurisdiction over energy policy, along with the House Energy and Commerce Committee, held a hearing that you would think with skyrocketing gas prices, that the Natural Resources Committee would hold a hearing about how to lower gas prices. They can actually move legislation that we’ve recommended and urged them to take up to lower gas prices at the pump today.

“But, no. That’s not what they had the hearing on. The Natural Resources Committee had a hearing on big cats. That’s right. Amidst this gas crisis that’s crushing American families – taking money out of their pockets every single week when they fill up their vehicle. Instead of having hearings on how to lower gas prices, they had a hearing on big cats. That is how out of touch Speaker Pelosi and the Democrats here in Washington are with the American people.”

“A few weeks ago, when he tried to call Saudi [Arabia] to produce more oil, they didn’t even return his phone call. [President] Biden, you do not need to go to Saudi Arabia to find a way to produce more energy. It’s right here in America!

On the United States having high standards for energy production:

“And by the way, I can tell you, President Biden, you don’t have to wonder what the answer will be if you ask them if they’ll produce more energy in Port Fourchon, Louisiana. Their answer will be yes because they know how to produce good, clean American energy, by the way, cleaner than anywhere else in the world.

“Don’t fly over 5,000 miles to Saudi Arabia where you don’t know the answer because they’re a cartel. OPEC is a cartel. It’s a monopoly. They like a higher price of gasoline. But even if they said yes, first of all, the energy they produce is not as clean as what we produce in America because we have the best standards.”

On the economic advantages of American energy production:

“But, what also is critically important is that by saying no to American energy as [President] Biden did [on] day one when he came into the White House, by going and asking Saudi [Arabia] to produce more energy that takes more money out of America’s coffers. So, America actually makes – next to [the] income that people write their taxes to the [Internal Revenue Service] from – the largest producing federal agency for tax revenue is the Department of Interior. Drilling on federal and state lands, public and private lands [generate] more income than any other agency next to the IRS. And that money is depleting, that revenue is depleting.

“You know what else it means? States like Louisiana actually share in the revenue when they drill for oil. So, my colleagues in North Dakota are seeing a huge decrease in their school budgets because [President] Biden shut down American energy and that takes money out of their school systems’ coffers.

“In Louisiana, we actually use the revenue from drilling to restore our coasts – something that’s been an environmental tragedy going on for decades. Our state finally stepped up and said, ‘We’re going to dedicate the lion’s share of our drilling revenue to rebuild [the] land, so we don’t have as strong of hurricanes that hit where people are.’ And that’s something we’ve been working on for decades. And [President] Biden has taken that away.”

“So President Biden, don’t expend a massive carbon footprint to fight fly over 5,000 miles to Saudi [Arabia] and beg them to drill for more oil, and [they] might even say no. Just fly right down to any part of the United States, like Port Fourchon, where the answer will be yes to clean American energy. We know the answers.

“Republicans have been laying out these answers for over a year. What we need is a President who’s willing to listen. Who is actually willing to work with people on the other side to address these serious problems that are facing the hardworking families all across the country who are struggling. We’re going to continue to do that. We’re going to continue to reach out and offer these solutions. Hopefully, one day President Biden will finally stop flying to foreign countries and asking them for help when the answer is yes, right here in the United States of America, if he just asked the question.”