Please see highlights from the colloquy below. 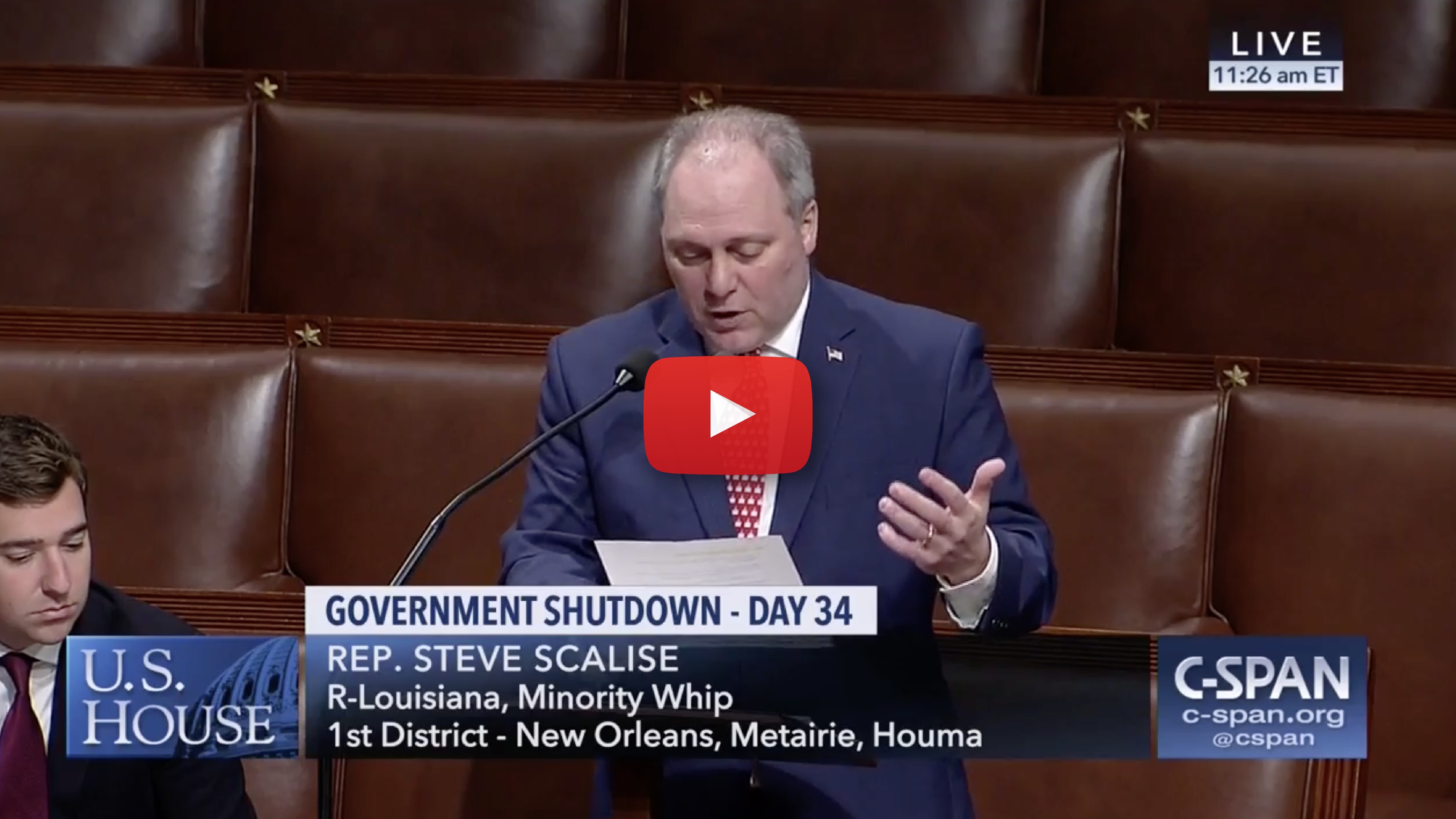 Click here or on the image above to watch the clip.
“As we work to reopen the government and to secure the border, clearly there has been a divide on the other side. We were trying to get some kind of agreement on how much the majority is willing to work with us to put an offer on the table.

“So far we have not seen a single counteroffer from the majority. In fact, when the President spoke to the nation, at 4:07 P.M.—before the President even walked to the microphone at 4:07 P.M.—at 4:00 P.M. the Speaker of the House had already put out a statement opposing the plan that hadn’t even been presented.

“What I’d like to ask the Majority Leader is, if we’re trying to get a resolution, if the President continues to try to lay out alternatives, if the president’s latest alternative wasn’t even offered until 4:07 P.M., why did the Speaker of the House already reject it before it was even presented? Is there an actual desire to work together to solve the problem or is the answer going to continue to be no alternative, no alternative? At some point we have got to get an agreement on how to solve this problem.”

On the Speaker holding government workers and the State of the Union hostage: 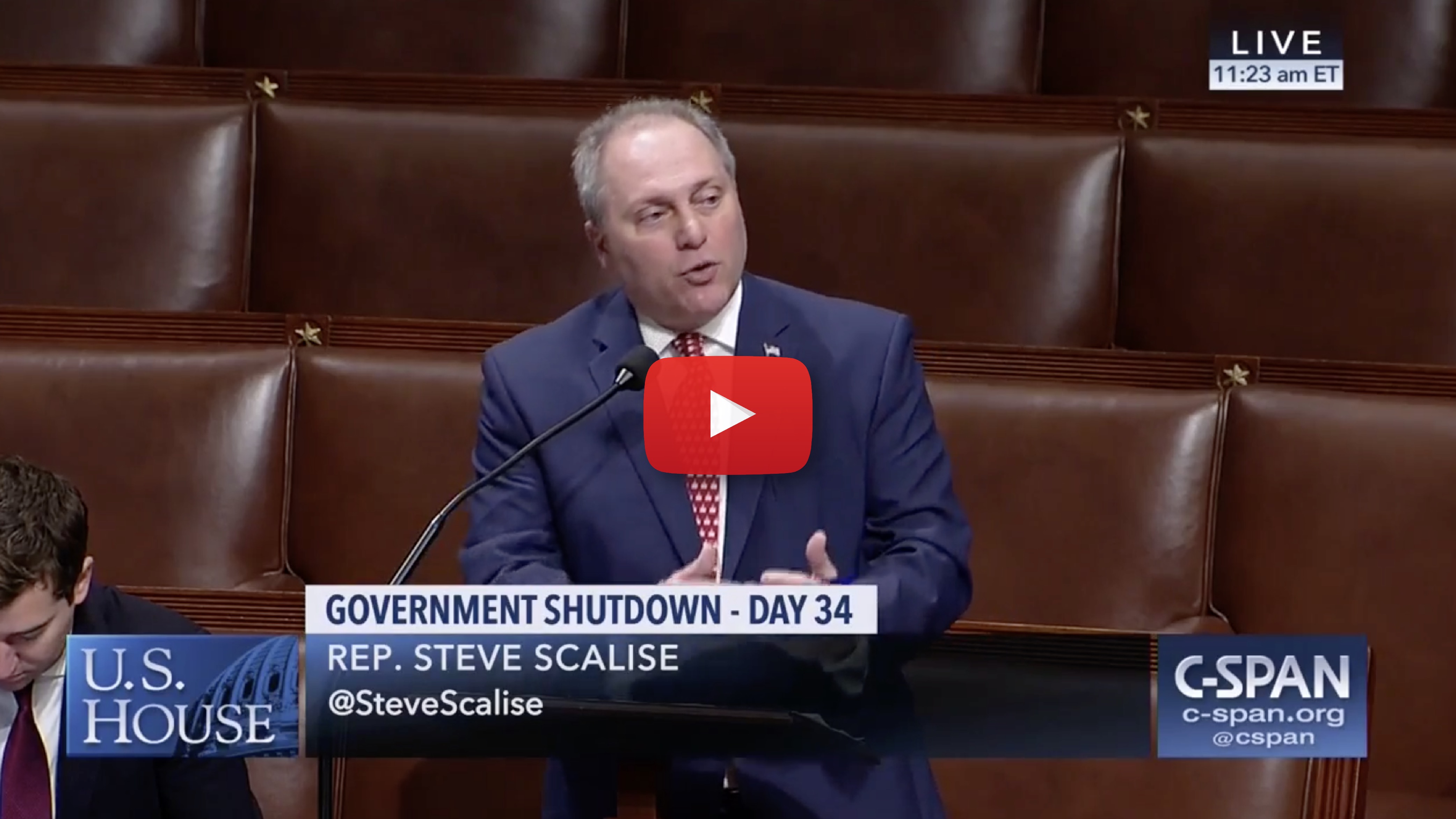 “When the President of the United States looked at the Speaker and said, ‘OK, I’ll tell you what. We disagree on a lot of this, but I’ll agree to keep the government open even with the things I disagree with for the next 30 days, if at the end of that 30 days you’re willing to negotiate with me on the wall and the border security.’ And the Speaker of the House said, ‘No.’

“Who is holding who hostage? Look at some of the votes. We had a vote today on the House floor to pay everybody, to pay everybody who’s worked or who’s been furloughed. Those people that are securing our border today without pay, they ought to get paid and we ought to vote on the House floor. We almost got there, 200-214. Every Republican voted yes. Thirteen Democrats voted yes.

“At the beginning, the first week of this new majority, when you brought a bill to the floor to fund what was presented as the Senate bills, some of those bills had passed the Senate, but not all of them. In fact, one of those bills would not have passed the Senate because it would have allowed taxpayer funding to go to foreign government entities who provide abortion. Let’s get this right, and let the record reflect that you were willing to bring a bill to the floor a few weeks ago that allows taxpayer money to go to fund abortion in foreign countries, but you wouldn’t put a dime in that bill to secure America’s border.

“There was not a dime of money from the President’s request to secure America’s border, but taxpayer money went to fund abortion in foreign countries. Sure, I voted no on that because that’s not the values of this country. Let’s be serious about this.”

“The President said, ‘I’m willing to negotiate and let you ban cement walls.’ The President said he’s willing to do that. Right now, the experts are saying steel slats is the best approach. The Majority Leader himself just a few days ago said, and I quote, ‘Physical barriers are part of the solution.’ I think we’re making headway. If the Majority Leader agrees that physical barriers are part of the solution, maybe because the Speaker is saying that walls are immoral. … The gentleman from Maryland and I agree on enhancing port security.

“You don’t put a door on your House and then leave the windows open. Who would do that? Who would call that security of your house? The president is saying, ‘We have over 500 miles of area in our country that’s not secure.’ We have a big door. We will strengthen the door, but then you’ll leave 500 miles wide open. Then, you’re going to wonder why people are coming in illegally.

“If we’re for border security, it’s going to cost something to actually back that up. I would ask the gentleman, what amount is the majority willing to put on the table for real border security, which includes physical barriers? And I quote you again, ‘Physical barriers are part of the solution.’ I agree with the gentleman from Maryland on that. But I guess maybe the question I have is, the experts have told us it’s going to cost $5.7 billion to build that physical barrier. How much of that $5.7 billion is the gentleman willing to support?”

On Senate Democrats’ role in obstruction and Democrat leaders’ blocking of fellow Democrats who would like to compromise on a solution: 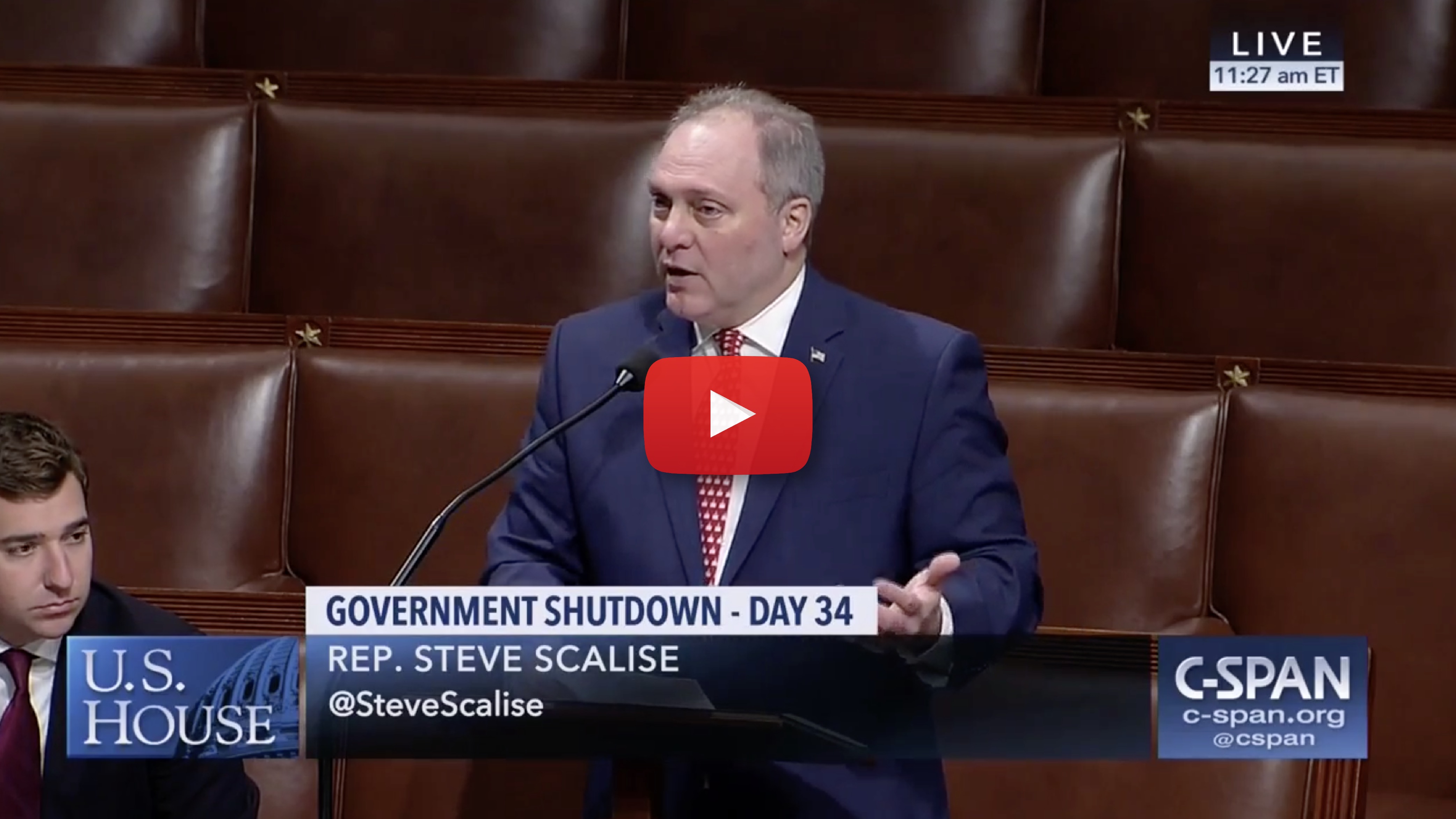 Click here or on the image above to watch the clip.
“The President said, ‘Well, if the Speaker of the House won’t negotiate, maybe I’ll bring in other Democrats.’ It’s a growing list of Democrats that are starting to say we need to address this problem.

“I’ll read the Chairman of the House Agriculture Committee. Mr. Collin Peterson, Democrat from Minnesota. Quote, ‘Give trump the money. I’d give him the whole thing and put strings on it so you make sure he puts the wall where it needs to be. Why are we fighting over this? We’re going to build a wall anyway at some time.’

“Adam Smith, Chairman of the House Armed Services Committee, quote, ‘The wall is not in itself a bad idea. It’s just – it’s been done.’ Cheri Bustos from Illinois, quote, ‘If we have a partial wall, if we have fencing, if we have technology used to keep our borders safe, all of that is fine.’

“We see a growing list of rank-and-file Democrats and even committee chairmen that are saying let’s just do this. Yet the Speaker refuses to do it. The President invited some members of the Democrat majority in the House to the White House. The first meeting, some of them didn’t even show up. We want to talk about civility?

“We’re in a shut down and the President of the United States says, ‘I want to bring some Democrats in to see if we can resolve this.’ They don’t even show up. Maybe they were told not to go.

“A few days later, the President invites a different group. In that group we actually did have some members that went. The gentleman from Maryland, that day, was on a TV show and when they asked if those Democrats going to the White House had the authority to negotiate, the Majority Leader of the House said, quote, ‘They do not have the authority to strike a deal.’

“You are saying that, quote, ‘Physical barriers are part of the solution.’ The Speaker of the House doesn’t necessarily share that view from the comments I have heard from her, but if the gentleman from Maryland thinks physical borders are part of the solution, other Democrats want to negotiate a solution. Who is authorized? Who does have the authority to strike a deal?”

On Democrats’ decision to recess and refusal to negotiate: 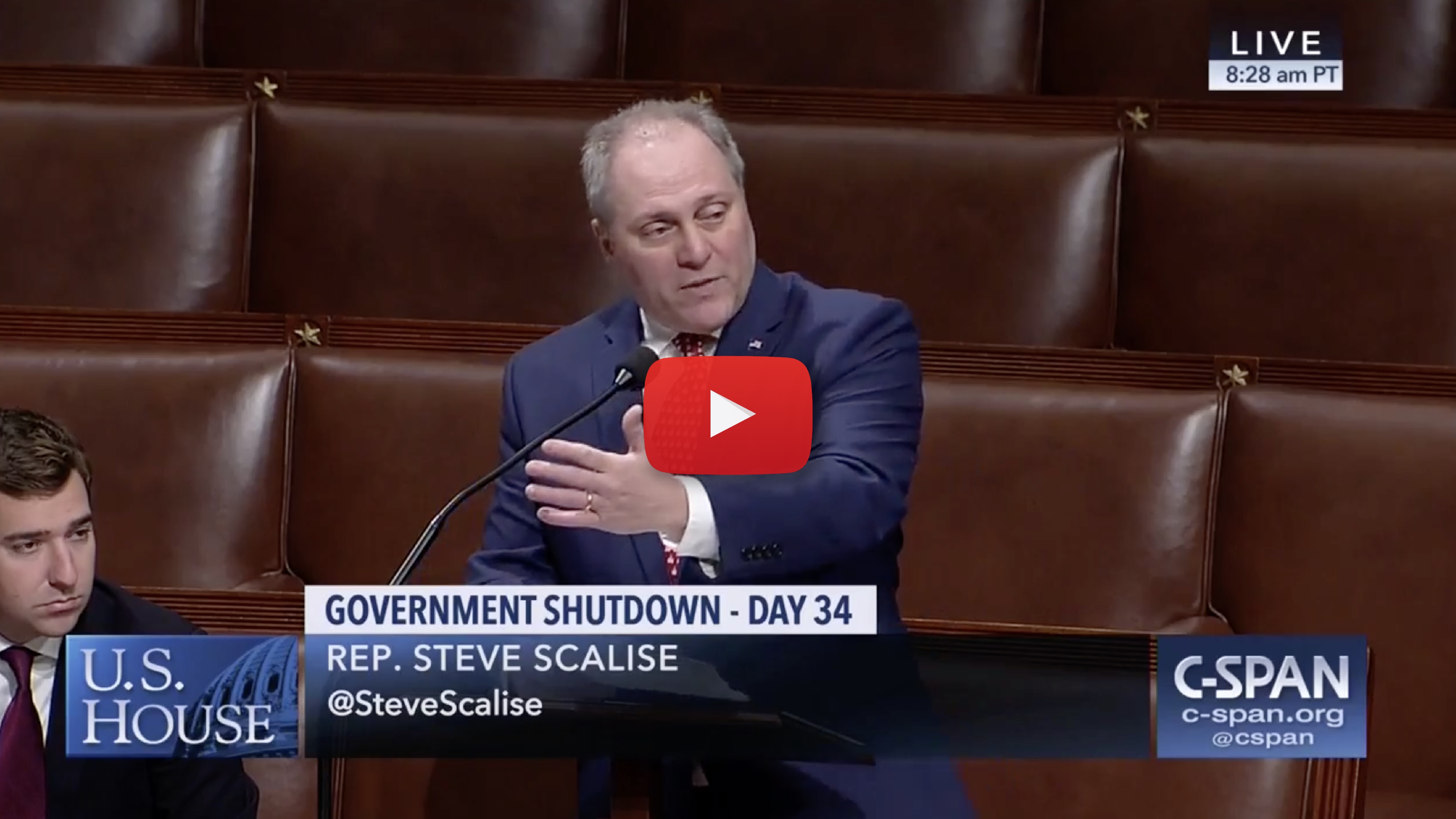 Click here or on the image above to watch the clip.
“The majority just voted to adjourn again. Here’s the quote you just said. The gentleman from Maryland said, quote, ‘We’re not going to talk until the government is open.’ During the shutdown, you’re not going to negotiate how to get out of a shutdown.

“You wonder why people look and go, ‘Why can’t you figure it out?’ The President has offered idea after idea and eventually you’re negotiating against yourself when the other side says, ‘We’re not going to talk until we get everything we want.’ Well, you know what in divided government, nobody gets everything they want.

“But you have to start talking today. The 800,000 people who are working or not working and not getting paychecks, which we voted again today to pay all of them. We had a vote on the House floor to pay all of them and we got 13 Democrats to vote for that.

“Last week it was only six. A growing number of Democrats are recognizing, stop all of this foolishness of saying, ‘We’re not going to talk to you when the President’s trying to talk. We’re going to reject your offer before you put it on the table.’

“4:00 Saturday, the Speaker rejected an offer that wasn’t even proposed until 4:07. To say, quote, ‘We’re not going to talk while we’re in the shutdown,’ how do we get out of the shutdown unless people are talking? I think the gentleman from Maryland and I could solve this problem. He [said], ‘Physical barriers are part of the solution.’

“It’s not the Republican Party saying $5.7 billion is what it will cost to secure our border. It’s the experts who secure our border who say it’s going to cost $5.7 billion. If you disagree with that number, you don’t like the color of the wall or the style of the slats and the steel, you want to make it out of bamboo—I don’t know what your offer is because you never put an offer on the table—but at some point, you have to. You have to put a counteroffer on the table if we’re going to get out of this.

“I want to get out of this. I voted multiple times to get out of it, to pay people. You know, you can show votes. I can show votes. Ultimately, we need to talk to get an agreement. I continue to stand ready. The President stands ready. Our minority here in the House, our majority in the Senate stands ready. But if only one side is saying we’re going to talk and the other side says, and I quote, ‘We’re not going to talk,’ that’s not going to resolve itself.

“We have to talk if it’s going to resolve itself and hopefully we do. I stand ready.”