WASHINGTON, D.C.—House Republican Whip Steve Scalise (R-La.) joined Fox Business Network’s Mornings with Maria and Fox News Channel’s Fox & Friends this morning to denounce the violent mobs that stormed the U.S. Capitol yesterday. Whip Scalise emphasized how there is no place in this country for resorting to violence to solve our differences and thanked the U.S. Capitol Police and every brave law enforcement officer who fought back to restore control of Congress. 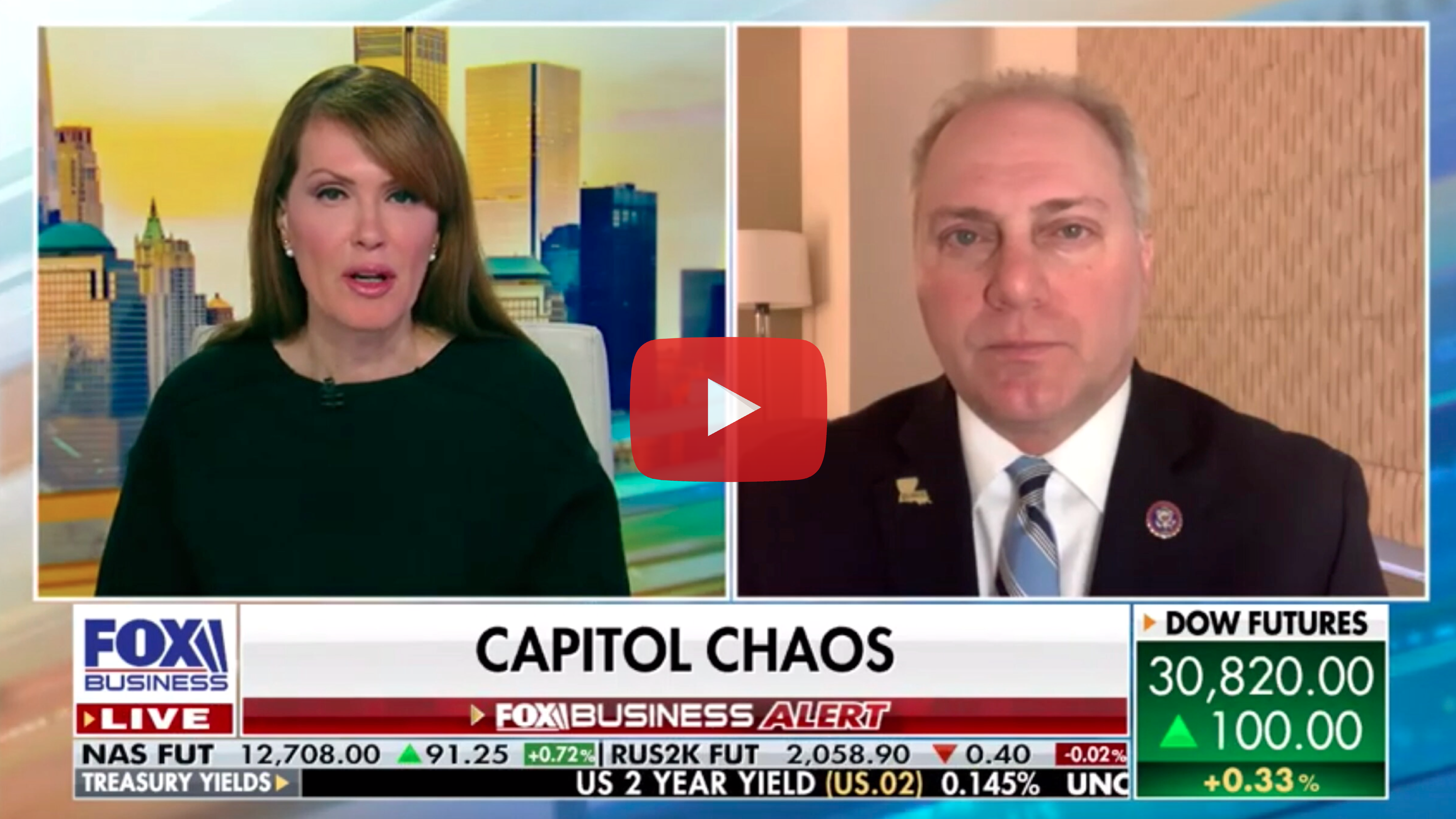 Click here or on the image above to watch the Mornings with Maria interview. 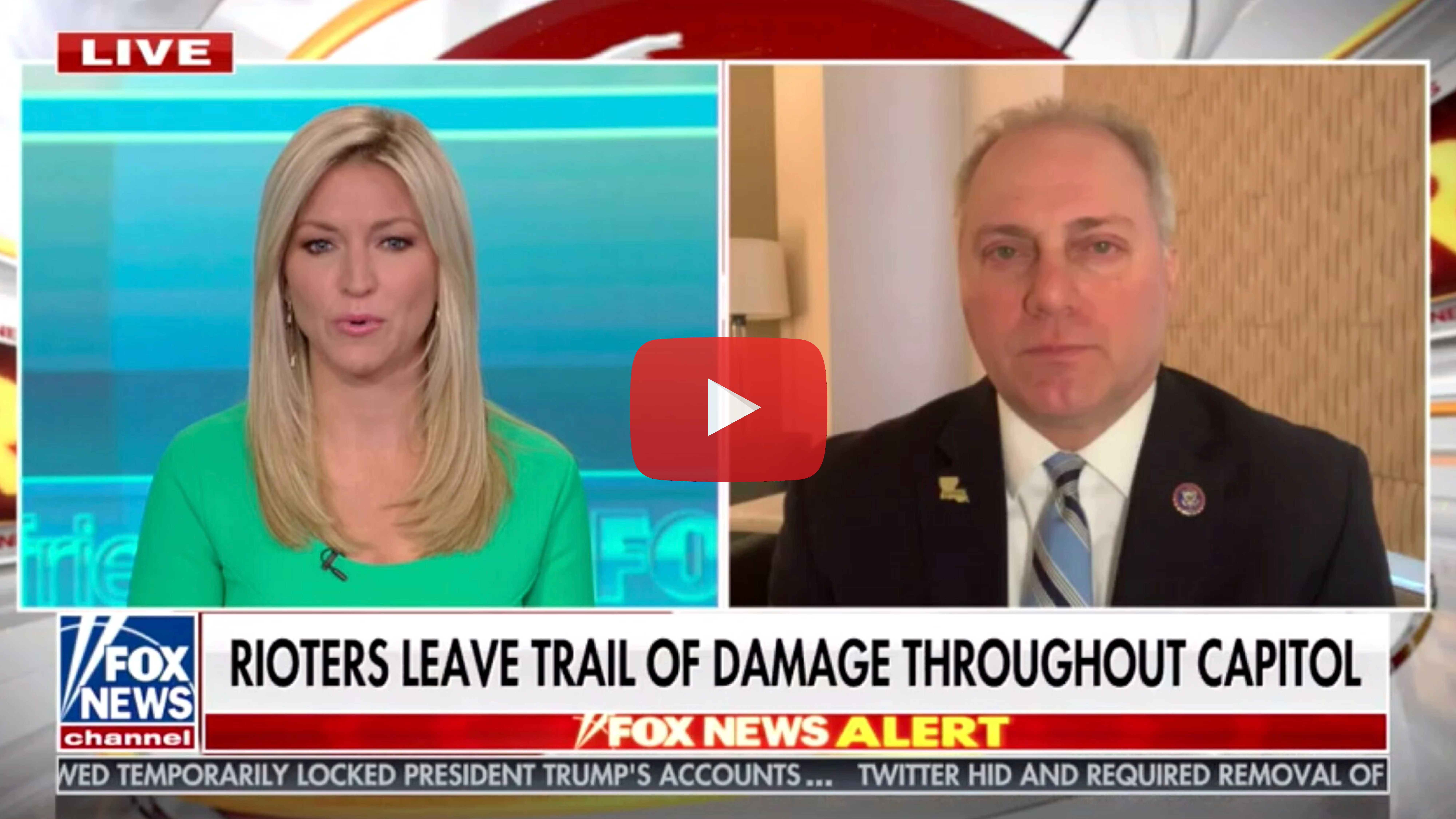 Transcribed remarks from Mornings with Maria:

On the unacceptable violence at the U.S. Capitol:

“Yesterday was such a dark day for our country to see the Capitol get overrun like that. And, you know, we were in the middle of a debate, dealing with the Constitutional duty to count electors and we’re in the middle of that debate. I was participating in that debate and next thing you know, my Capitol Police detail that’s with me came over and said, ‘We’ve got to go.’ And it was just very quick and alarming that we had seen that there were a lot of people outside but that you started hearing reports, they were starting to breach some of the perimeters of the Capitol and ultimately breached the House itself, not the House Chamber, but the Senate Chamber was breached, the Capitol itself was breached, and there’s just no place for that. It was a very alarming day to see it come to that and we all need to denounce that in the strongest terms. I surely did. I think we all stood together and said this shouldn’t happen in America.”

On the need for Congress to resume its work:

“You know, there were a lot of emotions and, you know, some deja vu flashback to that day three years ago on the ball field where it’s a surreal moment. You’re not expecting that. And again, sitting in the House Chamber, just conducting a daily debate. It might have been a heated debate – we have a lot of those. You surely don’t expect that the Capitol is going to get overrun. That’s, I think, where the emotions came out. You know, I worried about the Capitol Police Officers who were being attacked. I worried about my colleagues who were there, and we had a lot of questions along the way and once we got together as House and Senate leaders later that day, we talked about how to get the Capitol back and it was critical that we get control back of the Capitol, get back to work that day.

“You can’t let that happen. There was a lot of anger that I had that it shouldn’t have happened but we can’t let it win the day. We can’t end the day with us being denied the ability to get back to work and do the people’s business and we made that very clear to law enforcement authorities from the Secretary of Defense on down. I was in conversations with many of those officials and we talked about the importance of getting control back that day, because not only people all around the country were alarmed and watching, but people all around the world were too and it shouldn’t have happened. But we had to send a message that we were going to get back control of the Capitol and get back to work that same day and we did.”

On unequivocally condemning anyone who resorts to violence and disregards the rule of law:

“I didn’t speak with [President Trump] yesterday. I spoke with Vice President Pence during the period where we were working to get control of the Capitol again but, you know, I was very quick to condemn it. You don’t care who does something at that point. You condemn it because there’s no place for it and whether it’s coming from the left or the right, it’s coming from, these are anarchists, these are terrorists. This isn’t some display of a Constitutional right at that point. When you resort to violence, and, you know, I called it out last summer when I saw it. I called it out yesterday. I wish both sides were equally vocal last summer when it was going on because, again, whether it’s coming from the left or right, it’s not a political spectrum issue. It’s about respecting the rule of law and respecting law enforcement too because they did injure a number of Capitol Police Officers and nobody should stand for that.”

“I’d like to see an unequivocal condemnation of what happened. Again, there’s no justification for people resorting to violence. We have a hallmark in America that we can debate our differences; we can express our strong opinions. We have a right to assemble and free speech, but we don’t have a right to resort to violence to settle our differences. That’s not who we are and any time that happens it needs to be condemned without equivocation.”

On the Republican pathway forward:

“[Republicans] go where we’ve gone throughout our history. We fight for the freedoms of people. This is who we are as a party. We’re the party of Lincoln and there are real strong beliefs that we’ve always held. We believe in the power of the individual, and we believe in the rule of law, and that’s what we’re going to continue to fight for. We’ve seen a socialist move to the left by the Democrat Party. They’re no longer moderates and liberals, they’re far left progressives and socialists and that’s where the core of their party is. I don’t think that’s where the core of Democrats across the country are, but that’s where the leadership structure of the Democrat Party in Washington is. I think that’s out of touch with this country. And we’ve got to continue to lay out a strong alternative for what our view of America is, and I think we need to do a better job of that. And that’s going to be one of the challenges we face as we point out the ills of a socialist left movement. We’ve also got to show the country what a conservative agenda looks like and how it benefits them.”

On condemning the use of violence to solve political differences:

“It was a very disturbing day yesterday. You know, I had a lot of anger as so many of my colleagues that the Capitol got overrun. These were anarchists and terrorists, there is no place for it. And all of us that were unequivocal yesterday just like we were unequivocal during the summer that there is no place in this country to resort to violence to solve differences. That’s not who we are as a country, it was very upsetting to see it happen yesterday. It was critical as some of my other colleagues have said that we had to take the House back and come back to work last night, and we did, and that was a big focus of the day, when the Capitol had gotten overrun that we had to get it back. And I just really do appreciate the work that our Capitol Police do, many of them were injured, assaulted during that overrun. You know, my heart was going out to them because I knew the things that they were dealing with. As well as colleagues and staff who were still in the Capitol during that period.”

On securing the U.S. Capitol:

On uniting as a country to move forward:

“We’ve got to come together and, you know, there has to be a peaceful transfer of power. It’s the hallmark of our country and you’re seeing the White House talk about that now and they need to because I think it’s an important time for the country to come together. We have political differences, it’s been something the country has had for over 240 years and we celebrate our differences, we don’t resort to violence to do that and we can’t do it now. Again, what happened yesterday should be condemned by everybody just like what happened during last summer should have been condemned when people resorted to violence. So, let’s come back together, let’s tone down the rhetoric. We’re not all going to agree on everything. Again, that’s not who America is either but how we do it says a lot about us, and we need to be better about how we tone down the rhetoric to come together where we can and there are a number of areas where we can come together. We’ve got to get our country back on track in terms of getting through the Coronavirus, getting the vaccine widely distributed. But, you know, yesterday was a dark day and we can’t have more days like that.”