WASHINGTON, D.C. — House Republican Whip Steve Scalise (R-La.) pressed Majority Leader Steny Hoyer (D-Md.) in today’s colloquy on why Democrats are continuing to hold assistance for small businesses hostage in COVID-relief negotiations. Whip Scalise pointed out that both Republicans and Democrats are in full agreement that small businesses need help and need it now, as over 110,000 restaurants have closed since the start of the pandemic.

Scalise also brought up reports of a Chinese spy infiltrating the office of Rep. Eric Swalwell (D-Calif.), and asked if Democrat leadership was aware of Rep. Swalwell’s reported ties to a Chinese spy before Rep. Swalwell was placed on the House Permanent Select Committee on Intelligence. Majority Leader Hoyer did not have a clear answer.

On the urgent need to pass PPP and provide immediate relief to small businesses: 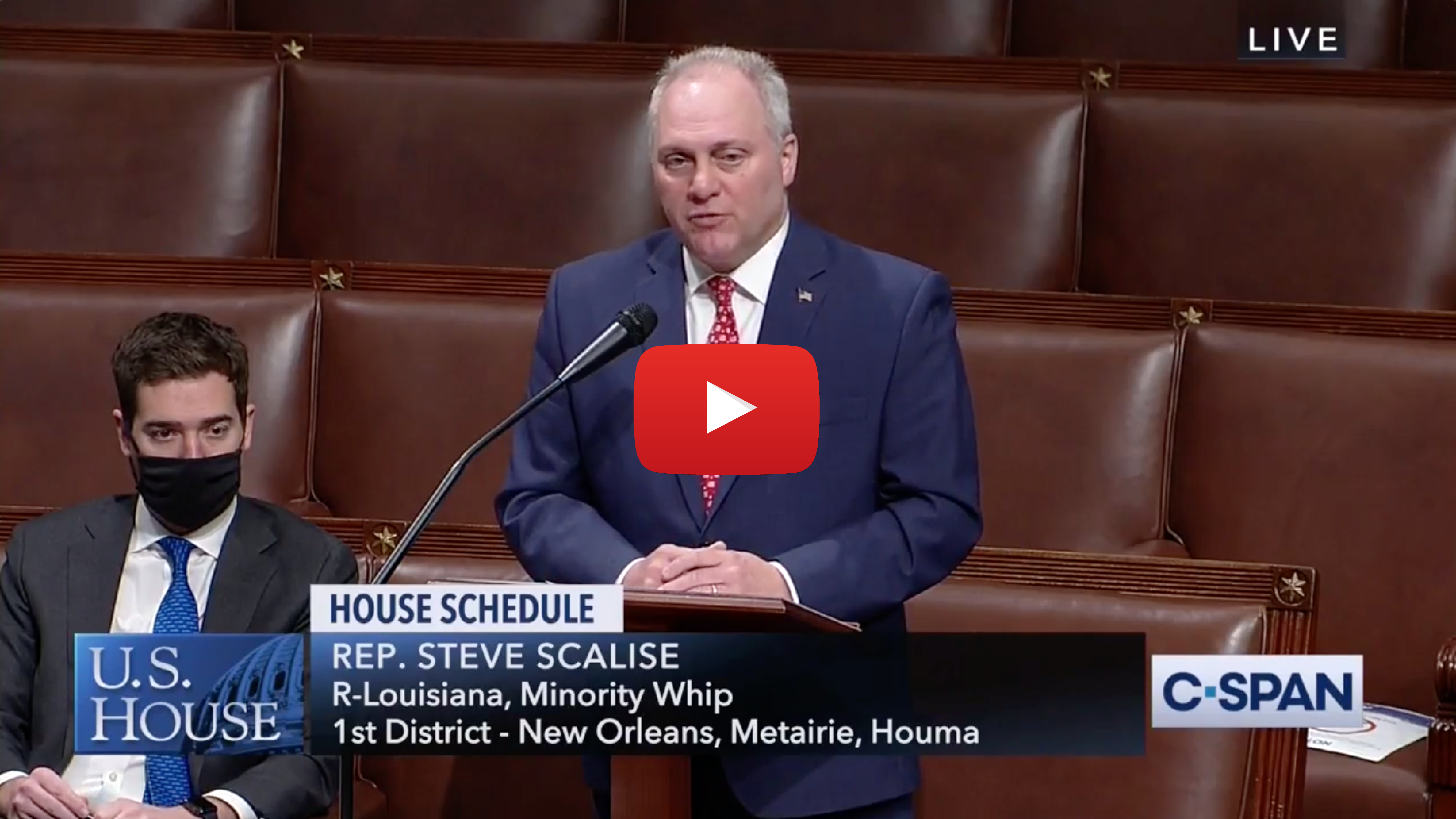 “I agree that we need to continue these negotiations and get a resolution and hopefully we will in the coming week, both on COVID relief and on the funding of government. We’ve agreed on caps already, hopefully we maintain that and get that done to give certainty to all of our agencies. We know how much money it costs the Defense Department, for example, every week that we’re in a Continuing Resolution, potentially billions of dollars that it costs just in procurement and the loss of those efficiencies. So, I share your optimism that we can get it done, and, obviously, we need to continue working through these final issues.

“I do want to thank the gentleman as we talked last week at the colloquy about the ALS Disability Insurance Access Act, and thank the gentleman then for scheduling it this week and it passed without opposition. One of those examples where we do work and come together and do something that actually helps people. This will help hundreds, possibly thousands of people struggling with ALS to be able to get access to the tools they need that they, under current law, are being denied. And to see the House come together so overwhelmingly to do that shows that we can, when we put our minds to it, work to actually help people. And this will help people in all of our districts. And I thank the gentleman again for getting that done, getting that bill to the Floor, and ultimately now all of us coming together to pass that bill on to the Senate and the President.

“I want to again bring up the Paycheck Protection Program bill by Congressman Chabot. This is a bill we’ve been talking about at this colloquy since September. And each week that goes by, we know that there is a list, unfortunately it’s a long list of areas where we have disagreement. There’s also a list of areas where we have full agreement. And if you look, a number of items where we’ve already decided we both Republicans and Democrats want to do this, then there are those items that we’re strongly opposed to on our side or you’re strongly opposed to on your side. And I would just continue to emphasize that these small businesses can’t wait for us to get an agreement or never get an agreement while there are things we could do to help them today, to save them today. And we continue to hear the heartbreaking stories. Over 100,000 restaurants in America have closed for good – gone. I know K-Paul’s restaurant in New Orleans, one of the world-famous restaurants. International Chef Paul Prudhomme invented blackened redfish at that restaurant – it’s gone. Too many other stories to mention.

“We see heartbreaking stories of a restaurant owner in Los Angeles who’s being told she can’t operate, and literally in the same parking lot next to her tents are tents of a film studio that’s able to operate. And so, it’s not about science in those cases, it’s about some government official picking winners and losers. And unfortunately, the losers are America’s small businesses. This needs to stop. I would just encourage the gentleman to bring the Chabot bill [to the House Floor]. A bill that has wide bipartisan support that would save [small businesses]. Today, we’re going to lose, just today, about 150 restaurants, and that number is even higher for other small businesses – in the hundreds a day. Friday we’ll lose 150 restaurants, Saturday we’ll lose 150 restaurants, Sunday, Monday, Tuesday, we’ll lose 150. We’ll lose over 700 restaurants between now and when we come back Tuesday. We don’t have to do that. If that bill was put on the Floor today it would have passed overwhelmingly, maybe unanimously, because it’s an area of agreement.

“This idea of holding hostage these small businesses that are dying on the vine while we try to get an agreement that we haven’t been able to get since August. Why can’t we just do the things that we agree on now while we negotiate the other things? Some of those things will never become law, and yet, it’s holding up the things that we agree on that would save small businesses today. 150 restaurants today will go under that shouldn’t, shouldn’t have gone under. We could have saved them. There are thousands of jobs tied to this, at Christmas time, that don’t need to be gone if we just pass the things we agree on while we negotiate the things we don’t. Because we may never get agreement on those things, but don’t let it hold these families hostage. Don’t let it hold these small businesses hostage. I would just urge, again, that the gentleman bring the Chabot bill to the Floor as soon as possible. We know it would pass overwhelmingly.”

On Rep. Eric Swalwell’s reported ties to a Chinese spy and position on the House Permanent Select Committee on Intelligence: 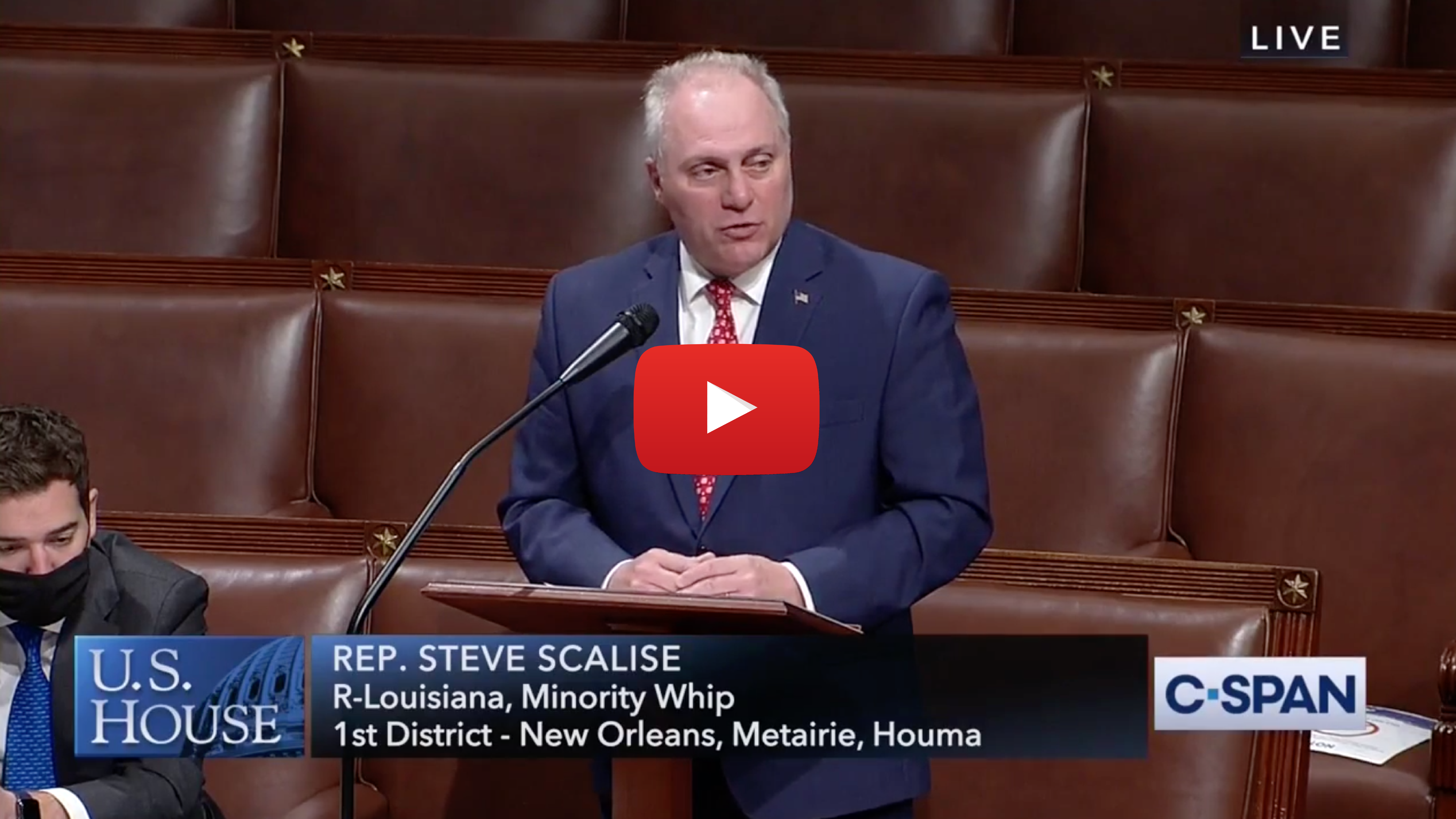 Scalise: “Finally, I want to ask the Majority Leader about reports that have come up about a member of the Intelligence Committee, Mr. Swalwell, having some kind of ties to a Chinese spy. There are alarming issues that are being raised. We haven’t gotten a lot of answers. I know many are asking: Was it known prior to the time he was put on the Intelligence Committee that there was this relationship with a Chinese spy?

“There are also reports that the Chinese spy also was able to infiltrate his office and possibly put other spies in his office. Is the gentleman — was the gentleman aware, maybe it was just the Speaker that was aware, but were you all aware of this tie to a Chinese spy prior to him being put on the committee? And why is he still on the Intelligence Committee? And I would yield.”

Scalise: “I thank the gentleman for yielding. I hope we get those answers. These are serious questions that have been raised and we’re talking about a committee that deals with the most sensitive intelligence information.

“In fact, most members of Congress do not have access to that level of intelligence that members of the Intelligence Committee get. And possibly their staffs have the ability to see some of that and if an office was infiltrated by spies from a foreign country, especially China at a time when we are investigating China and raising serious questions about them. These are questions that need to be answered. And I hope we get answers soon.”