WASHINGTON, D.C.—House Majority Whip Steve Scalise (R-La.) joined Fox News Channel’s Tucker Carlson Tonight to discuss today’s reported mail-bomb attacks and the disturbing trend of politically motivated violence. As a survivor of such an attack, Whip Scalise has been outspoken against violence in politics and urged Americans and political leaders to condemn it whenever it occurs. 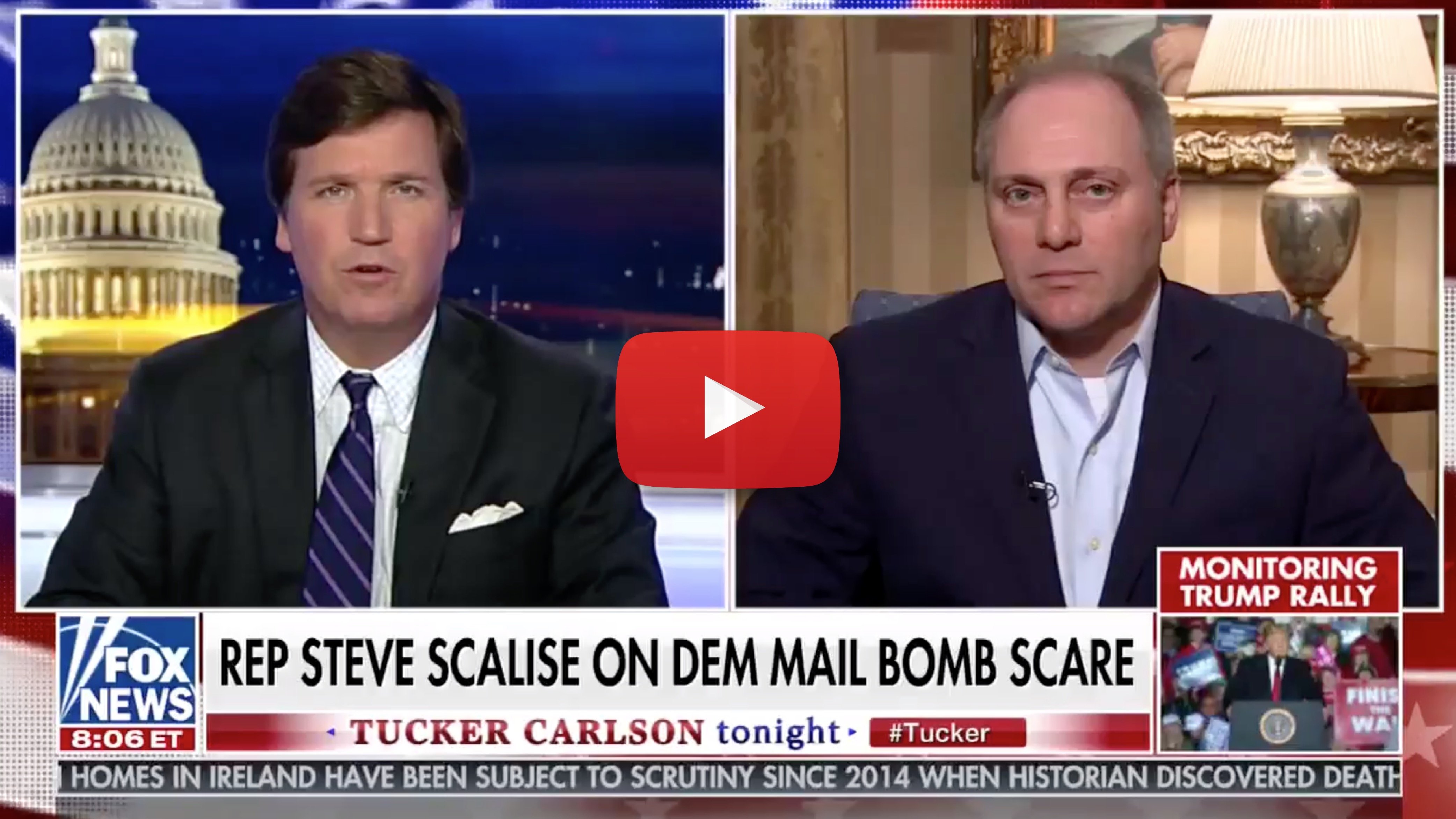 On his initial response to today’s reports of mail-bomb attacks:

“It’s anger. This isn’t the way that we should expect America to be turning. You are seeing more and more of this and clearly you are seeing it on both sides. We all need to be calling it out. Obviously, we need to find out what happened and the FBI is in the process of doing that. I feel very confident that our law enforcement officials are, ultimately, going to find out who did this, and if it’s one or multiple people, bring them to justice, as swiftly as possible.”

On President Trump’s response to these attacks and Democrats’ criticisms of the President:

“I thought that was a mistake on [the Democrats’] part to criticize the President. I think it was important that the President did come out with a statement the way he did—strongly. I heard silence a lot of times, when Republicans were under attack, from Democrat leaders. We all should be calling this out, whether a Republican or Democrat is under attack.

“First of all, we don’t even know who did it. We should be trying to find out who did it, but we should be criticizing the act whether it’s a Republican or Democrat. Some people only criticize when it’s a Democrat under attack. And the media was under attack too. There’s no place for that either.”

On how Americans should settle their political disagreements at the ballot box not with violence:

“I think the most important thing is to get back to what made this country great. Our founders didn’t set up some kind of system where everybody had to think the same way. In fact, they challenged their government. They wanted a system where individual people can speak their views and even speak out against their government. They put the First Amendment, ultimately, in the Constitution to ensure that right. We all have our disagreements. You should never make those personal and you should never think that violence is a way to settle our political differences. We settle them at the ballot box. We have an election in 13 days. That’s where we settle our differences. Violence is never an answer to somebody’s political disagreement with somebody else.

On America’s need to find unity and call out this violence no matter the party affiliation:

“When somebody tries to use threats or intimidation, it’s like the schoolyard bully. If they don’t want to confront their own demons, they try to threaten you and scare you away from just living your everyday life. That’s not who we are as Americans. You saw it after September 11th, when our very way of life was under attack by people who had a totally different viewpoint of America and what it stands for. We came together as a country and we said we are not going to back down. We are not going to change who we are. We shouldn’t [back down] here either. We should be equally vigilant. Republican and Democrat, no matter who is under attack. It’s wrong for whoever did the attack.