Whip Scalise also emphasized that by taking smart precautions, America doesn’t have to choose between protecting our personal health and re-opening our economy. 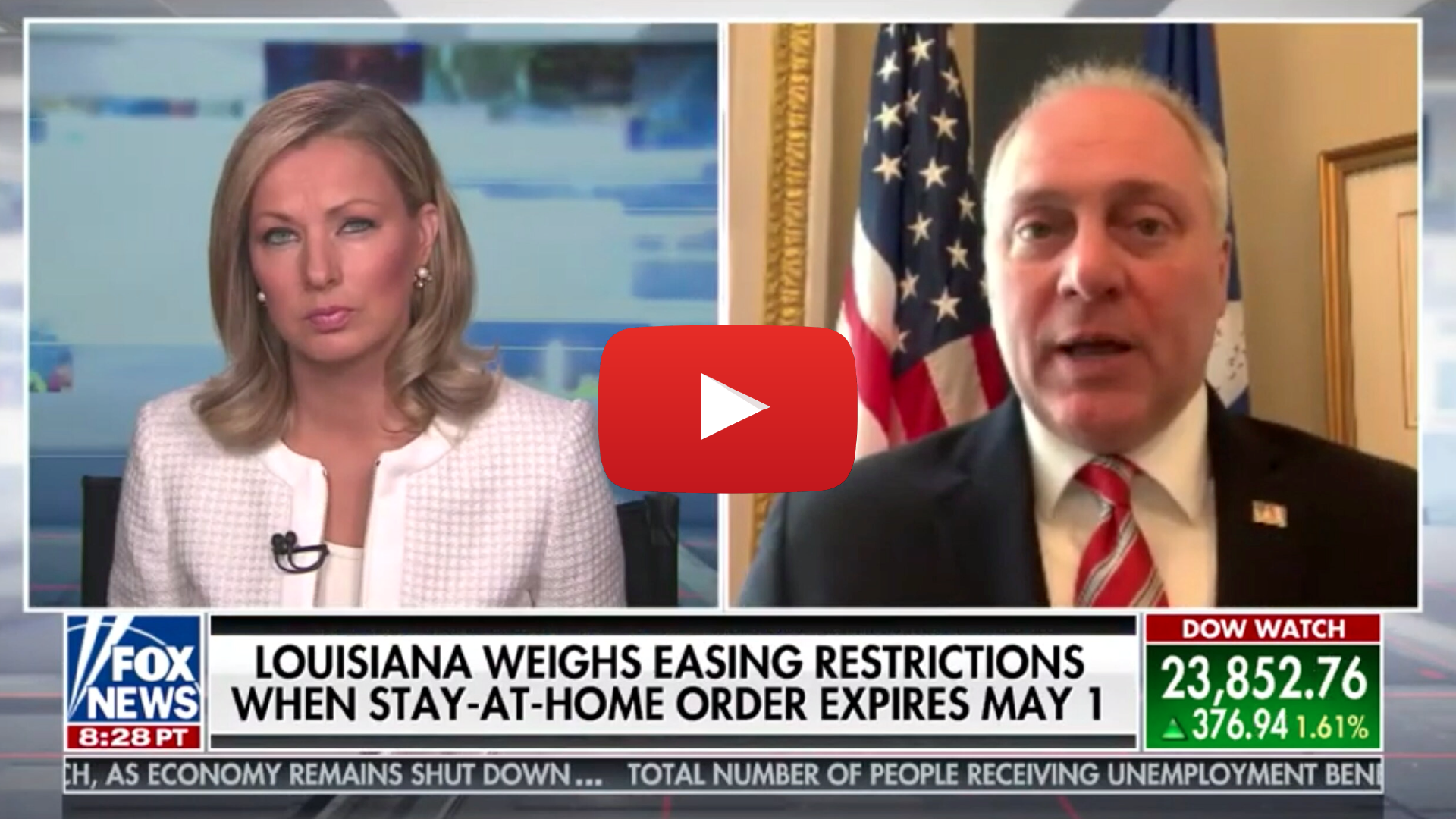 On blue state governors seeking bailouts for their states when Coronavirus funding is still on the way:

“Let’s keep in mind, we’ve spent trillions of dollars to try to keep our economy held together to keep small businesses, and families, and jobs, but there was $150 billion that went to states in the last bill, the CARES Act, that we passed a few weeks ago. That $150 billion is just starting to get to states. Each state was given an allocation based on population, and then the states and local governments have access to that money to get them through the COVID-19 crisis. And so, you know, as some governors that were having financial problems before this crisis, keep in mind, are talking about a bailout for themselves, just remember there’s $150 billion that just went out the door. Most of those states got that money in their bank account earlier this week, so they have that money. Before they start talking about a bailout from the federal government for problems they had prior to COVID-19, let’s make sure that this money that was spent that they’re just getting now is spent properly.”

“Let’s keep in mind, hundreds of billions of dollars are going to states, not just the $150 billion that was in the CARES Act specifically for state and local governments, but there’s also unemployment money, there’s money, of course, we’re going to pass more money for small businesses to help save those small businesses. And, by the way, that money, 75 percent of the money we’re going to pass today and the PPP, the Paycheck Protection Program has to be spent on workers, bringing workers off the unemployment rolls, that also saves states money. So, for some of these governors again, I mean, these are states you’re talking about, New York had real serious financial problems prior to COVID-19. They’re getting flushed with cash from the federal government for this crisis. Businesses and workers are getting money as well. We know there’s a shortfall everywhere. The real answer to that, Sandra, is to get our economy back open. You’ve heard President Trump talk about this, the need to make sure that we’re not trading off between safety of our health, and safety of our economy. You can and must do both, but you’ve got to start getting people back to work in a safe way over these next few weeks. Look, we’re learning a lot more from our medical experts about how to do that which includes social distancing, but, you know, you’re hearing from all these small businesses that say even with money from the federal government, they can’t hang on for another month or two.”

On voting to replenish the Paycheck Protection Program for our small businesses:

“Yes, I support the measure to replenish the Paycheck Protection Program, this has been a lifeline to so many small businesses. I’ve heard from small businesses, not only my district in Southeast Louisiana, but all across the country – some who have used this money to keep their business afloat, to keep their workers off of the unemployment rolls, and some who are about to face bankruptcy because they weren’t able to get a loan in the first round. We need to make sure that this passes today. It will pass overwhelmingly, and you know, this is kind of a unique vote with us voting in blocks where they’re basically breaking the whole roll into eight different blocks of Members, so it’ll take a few hours, but it’s important that it gets done.

“You know, in terms of that Oversight Committee – look, we have eight [oversight entities] already. This really is an attempt by Speaker Pelosi to just set up another impeachment type committee to harass the President, and that’s a concern. They should be focused on helping families right now.”

On Speaker Pelosi’s wasteful use of taxpayer dollars to establish another redundant committee to investigate President Trump:

“There are already eight committees, plus an Inspector General that we added in the CARES Act, and the President’s already appointed that person. Eight committees, including committees that Speaker Pelosi herself runs, she actually appointed the Chairs of those committees. If she doesn’t think they’re doing a good enough job, the answer should not be to create yet another committee and spend millions more taxpayer dollars just to harass the President. And if you watched the debate on this last night, it was very clear the people that are on there trying to help go after the President, help promote Joe Biden’s campaign. This isn’t a time for those kinds of politics, there’s an election in November, we should be focused on helping people not wasting millions more just to harass the President.”

On considering ways to reopen the state of Louisiana without compromising personal health:

“I’ve spoken to our Governor, John Bel Edwards, I’ve talked to the heads of all the big hospitals in New Orleans, and everybody is working together to do what they can to actually bring the curve down, and you’re seeing it come down. The number of people on ventilators is reducing, some of those indicators. Clearly, there are deaths, and these are tragic and, you know, we pray for families that have died from this. But there are families that have also died from things like suicides that we’re seeing on the rise also, we’re concerned about the mental health challenges. And so, the Governor said we’re going to start in the next few days going back to elective surgeries. Think about this, Sandra, there are a lot of people that have not been able to get their mammogram, or their colonoscopy, that you can detect early cancer or other things like that, they’re not doing right now. And so, you need to let people get back to having those kinds of basic procedures to save their lives as well. And so, the Governor is opening that up and in a phased approach as the President laid out. You can do these things safely, we’ve got to get our economy back open so that people can go out and get those medical procedures that will save their life while we’re also battling COIVD-19.”

“You do it in a smarter way, and that’s why you’re seeing right now everybody from your local restaurant to the largest sports leagues, are having these conversations about how to do it smarter. Nobody wants to put customers in jeopardy. People are starting to get antsy about wanting to get out of their house, but they don’t want to do it in a way that puts their family at risk. So, I think you’re going to see social distancing continue to be a big part of this, people have learned a lot more about how to do that, whether they want to wear masks and gloves. I think you’re going to see a lot of people taking temperatures at the entrance, whether it’s a shopping mall that might open up weeks from now, or a grocery store that already has customers in it, where they might take your temperature and just say, ‘Look, if you’ve got a fever over 100 degrees, stay at home because you’re at a higher risk. If you have diabetes and other things that put you higher at risk, just know that and be smart about how to take precautions.’ But, we have to start opening things back up again, because there are people that are having other consequences – health wise, diseases that aren’t being taken care of because they’re not able to get out and go take care of those things.”