WASHINGTON, D.C.—House Republican Whip Steve Scalise (R-La.) joined Fox Business Network’s Mornings with Maria to discuss safely reopening schools in order to protect the health and well-being of our students, and as a critical component for getting the American economy back on track. 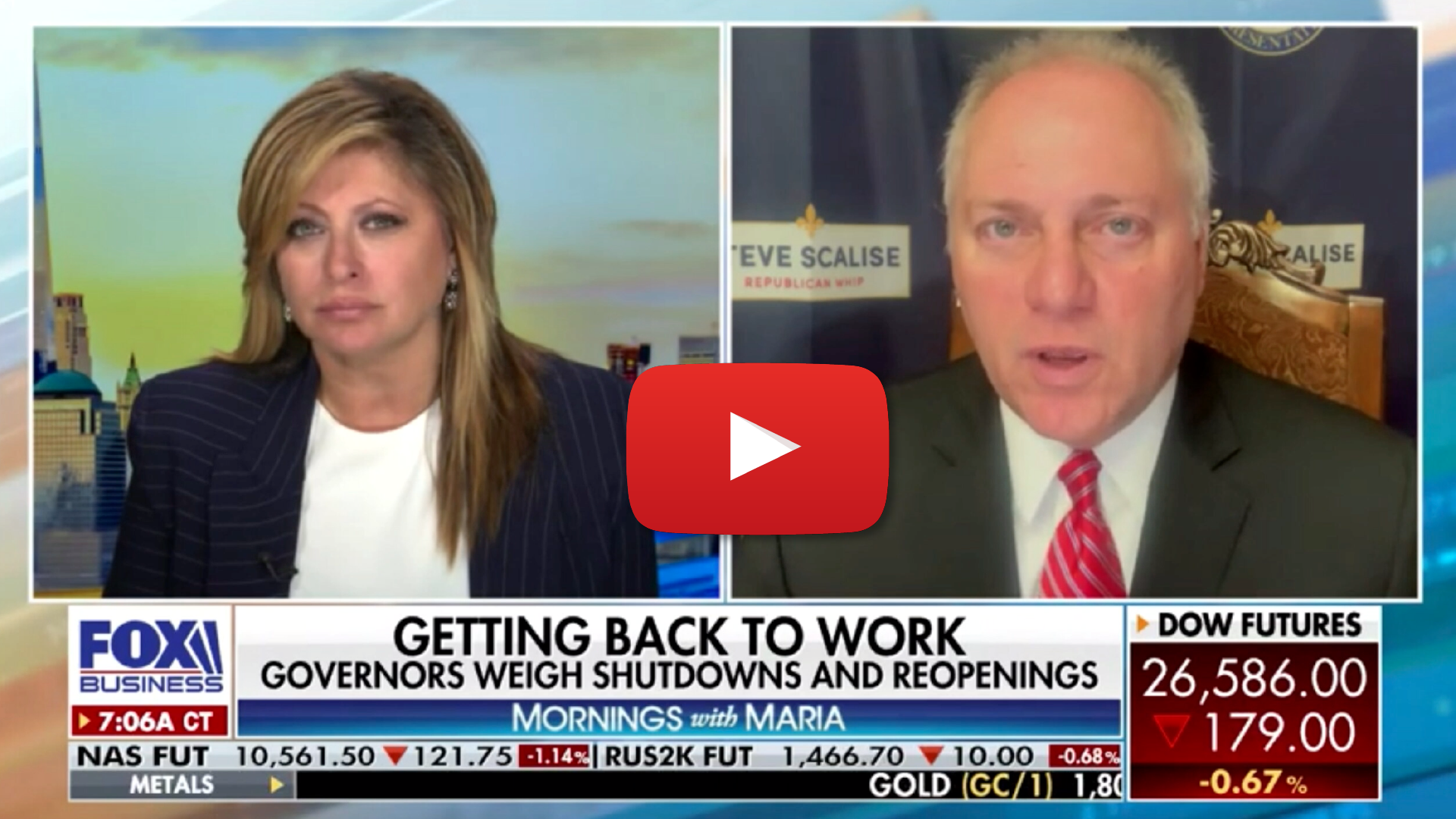 On safely reopening schools in the fall:

“Children need to go back to school and be in the classroom with their teachers, Maria, this is something that we’ve got to commit ourselves to making happen. There are safe ways to do it. I was with the Vice President just a few days ago in Baton Rouge and we had the [presidents] of the LSU system, the Southern University system working together. They’ve got different protocols that they’re putting out so that the students can safely come back to school. In Louisiana, all of our higher education schools are going to be open, our K-12 schools are working right now on plans to reopen, and every state needs to be putting together their plans, not saying whether or not to do it, but working to figure out how to do it safely. Share that data with other states, but ultimately get it done because the kids need to be in the classroom. We’re seeing a lot of pediatric studies that show the damage that was done to children by not being able to go back to school at the end of the semester last spring. We’ve got to work to get this done. We can get it done, and that’s where our focus needs to be.”

“I know that there are a lot of negotiations and whether or not there will be another package is still yet to be determined. But, you know, look whatever we do has to continue to be focused on helping people safely get back to work, helping schools safely reopen. There are a lot of federal dollars, hundreds of billions of federal dollars, that are still out there that we’ve already appropriated. If maybe a reallocation or continuing to tweak like what we did with the [Paycheck Protection Program] just a few weeks ago, where we took existing money and made it more flexible for businesses that are reopening, that’s something that we can look at. Maybe even more choice for kids in education if their school’s not reopening and there are other schools that are reopening, they ought to have that flexibility so that parents can send their kids to a school that’s going to be able to safely take care of their kid.

“And there are a lot of other reasons why schools need to reopen, it’s not just for the educational health of those kids, there’s a lot of mental health that’s involved in it. And then you also, you’ve got parents that are working and sending their kids to school, you’re also making it harder for those parents to go back to work as well. So, there are a lot of reasons why we need to say look this country’s done great things. I mean, we’ve taken on many challenges in the past and we’ve tackled them because we said let’s figure out how to get it done, not whether or not to get it done, and that’s what our attitude has to be. We have to serve our children and we have to be focused on serving them. It would be a cop-out to say it’s too hard so we’re just going to have kids stay at home learning again, that’s not an acceptable answer.”

“Thank goodness that Joe Biden’s going to have to come out of the basement at some point and let people know what he would do as president, because the contrast has never been sharper. What President Trump did to take an economy that was sluggish because of the Biden policies and turn it around and make it the hottest economy in the world, President Trump did it once. We’re now obviously at a different place because of COVID-19, but who better to bring that economy back than President Trump. And then go look at what Joe Biden rolled out on his energy plan. I mean, Maria, you know energy as well as anybody, we had a great energy plan, we were the one the dominant leaders in energy production before COVID-19, and we’re going to be again, by the way.

“Joe Biden’s plan brings us back to those policies of 10 years ago, and I called it Solyndra on steroids because it was Joe Biden who was the father of the Solyndra, the failed $535 million taxpayer subsidy to an energy company that failed because it was crony capitalism at its worst. That’s what Joe Biden wants to do now, not with $500 million of your tax dollars, but with $2 trillion, that’s not the direction we need to go. Higher energy costs are not what we need. President Trump’s got a proven record on energy and on the economy, and frankly the economy, Maria, I think is going to still be the biggest issue come November. It’s not today, we’re focused on getting through this pandemic. What the President’s done with Operation Warp Speed, we’re closer than we ever have, not only therapies that are proven, but also a vaccine possibly being ready, which is never heard of for any kind of disease to be this close because of what President Trump’s done with Operation Warp Speed.”

On voter turnout in the upcoming presidential election:

“I think you’re seeing an increased participation in mail-in voting and every state gives voters a lot of different options right now to vote, but I still see a lot of desire for people to want to in person vote. There’s just something unique about going to the polls and going into the voting booth and casting your vote, and that option ought to be there for people as well. So, you know, this is America we like choices, but ultimately, I think you’re going to see large numbers of people participating in this election. I think, by the way, the 8 million Trump voters who didn’t show up two years ago because Donald Trump wasn’t on the ballot, they’re going to be showing up in this election and that’s going to bode well for President Trump and Vice President Pence’s reelection. And look, those people are the forgotten men and women in states like Pennsylvania where Joe Biden wants to ban fracking. It’s not only Elizabeth Warren heading up his economic plan with all of this class warfare, but it’s also [Alexandria Ocasio-Cortez] heading up his energy plan with things like the Green New Deal, and solar panels on airplanes, and all this foolishness.”