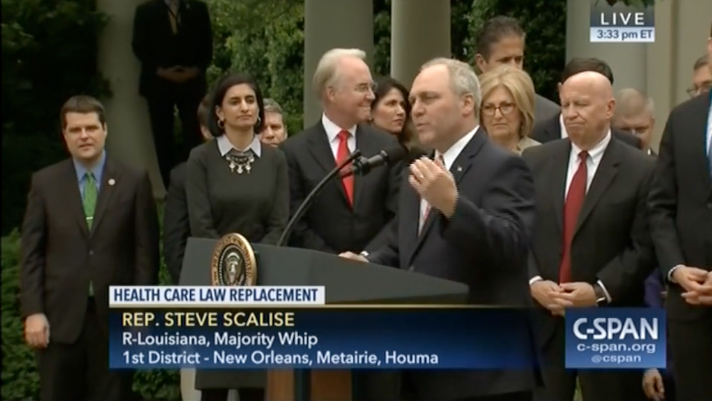 “Today we took the first step towards rescuing families from the failures of Obamacare. We’ve been seeing it play out all across the country. This isn’t some hypothetical discussion. You’ve seen families struggling in every part of our country. I heard from families all the time in my district in southeast Louisiana, sharing with me stories of double-digit premium increases every single year.

“When we had the 27 1/2 hour mark-up before the House Energy and Commerce Committee, longest they said in the history of Congress, just to pass this bill out of committee, we had a long and important discussion about health care policy in America and how this isn’t about achieving some kind of political goal; it’s about families, families who are struggling under the weight of this law that doesn’t work.

“And so I reached out to my own constituents and I said, share with me some of the stories and how this law, Obamacare, is affecting you personally, and unfortunately I got a lot of horror stories.

“One of the untold stories are the dramatic increases in deductibles. There are a lot of families across the countries that have over $10,000 deductibles. For most people, that means they really can’t even use the health care that they have on Obamacare. And so what Chris told me was, ‘Not only when we go to the doctor do we have to pay so much for our premium, but almost everything we do, we’re paying out of pocket because we’ve got such a large deductible. So basically I’m paying a lot of money for a healthcare plan that doesn’t work for me. Please provide relief for my family.’ We hear these stories over and over and over, and what’s been so encouraging about this debate is that, from the very beginning, every member of Congress that’s been involved in trying to get this bill passed has been focused on two main things. The first one is lowering premiums for families that are struggling. The second is making sure that patients and doctors are the ones that make their own health care decisions. Unelected bureaucrats in Washington should not have anything to do with the health decisions made between a patient and their doctor. That ends with this bill.

“As we went through this process, and it took weeks. Some people wanted it to take a couple of days, but we said ‘We’re going to take the time to get it right because it affects every person in this country.’ Every change that was made along the way made this bill better. Almost every change that was made along the way was focused on lowering premiums. Of course, you had a lot of other things that we wanted to do. We reform the Medicaid program. One of the most broken parts of health care, anybody will tell you, is Medicaid. We actually give governors and states the flexibility to go and be innovative and do things that’ll, in a much more targeted way, help low-income families. That’s another important aspect of this bill.

“We wouldn’t be here today without the work and the help of the President and the Vice President of the United States getting directly involved. Every meeting that we had with members that wanted to get additional components added to the bill, President Trump said, ‘Bring them into the White House. I want to meet with them. I want to talk to them about how we can actually lower premiums.’ Because President Trump’s focus from the beginning was the same thing. He knows Obamacare fails, but it’s failing because it’s hurting families, and he said, ‘How can we lower premiums? How can we give patients more control over their health care?’ Ultimately all of the meetings that we had along the way that made this bill better were focused on those objectives. That’s why it’s so important that we got this first step done today.

“There’s a lot of work left to be done, and I look forward to the Senate taking the action that they need to take, but ultimately getting a bill to Trump’s desk that he’ll sign, that actually rescues families from this incredibly failed law and puts patients back in charge of their health care decisions and lowers premiums.”