Whip Scalise called out President Biden for his out-of-control spending which has led to an unprecedented increase in inflation that has caused gasoline, car, and food prices to skyrocket. Additionally, Whip Scalise urged President Biden to abandon his reckless $3.5 trillion socialist grab bag reconciliation bill because it will raise taxes on hard-working American families and kill jobs. Whip Scalise also slammed Democrats’ efforts to eliminate Hyde Amendment protections which would allow taxpayer dollars to fund abortions and vowed that Republicans will fight Democrats’ radical, pro-abortion policies. 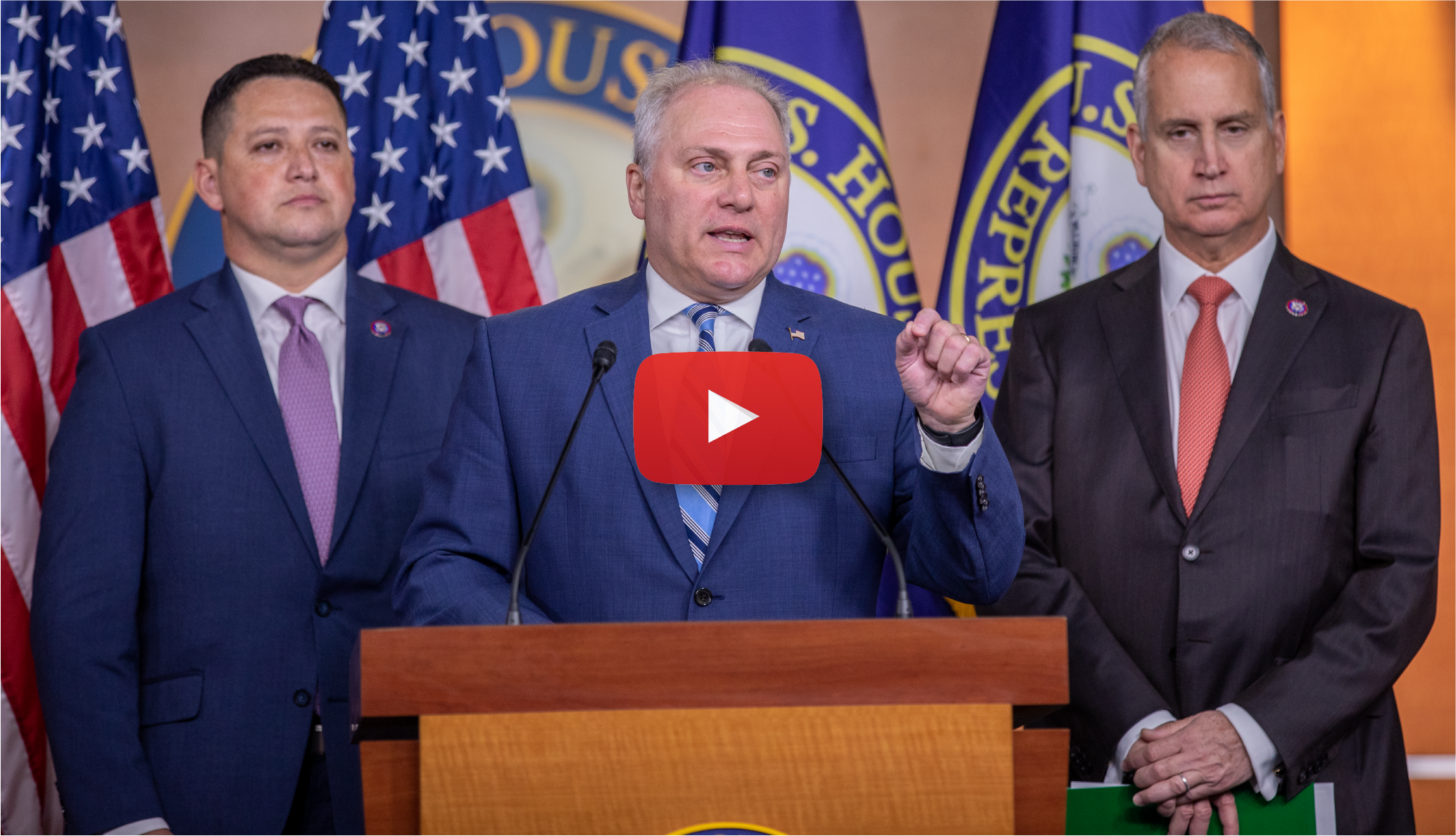 “Thank you Tony and Mario for coming and bringing the passion that you display. Fighting for freedom for the Cuban people, fighting to secure our border. Elise, I appreciate the message that you’ve been honing in on because House Republicans have been fighting for months to highlight this crisis at our southern border that was created specifically by Joe Biden’s policies.

“When Joe Biden sent a signal out to open the border, when he became President [he got] rid of the ‘Remain in Mexico’ policy, turning his back on the agreements that had already been negotiated, not just with Mexico, but [with] the Northern Triangle countries. They were all working to finally stop the flow of people coming in illegally. And now, we see the doors wide open to the point where the drug cartels have operational control over America’s southern border. It has got to come to an end. The drugs that are coming across illegally, flooding our communities with drugs like fentanyl, which are killing families all across America.

“The child abuse that we see with these caravans coming over, abusing these children, using them in their tools to try to open up our border and send a message that America will no longer control the southern border. This has to end, and President Biden can end it, but he’s chosen not to.”

On the Cuban people rejecting socialism and calling for independence:

“When you look at Cuba, it was heartwarming to see the people of Cuba going to the streets. And in fact, bringing the American flag through the streets of Havana to demand freedom because the American flag still represents freedom all around the world. And unfortunately, here in America, you still see some people turning their backs on the American flag. But that flag stands for freedom for a reason. We need to be standing with the people of Cuba who want and demand freedom. They deserve freedom, but it wasn’t because of COVID that they went to the streets as the White House was suggesting. It was because of the oppression from a socialist regime.”

“This administration can’t say the word socialism because they’ve been embracing socialism for the six months that Joe Biden has been President. You could see it going on in the Senate right now with reconciliation moving through. Reconciliation is just a congressional word for President Biden and his socialist allies in Congress attempting to raise taxes and increase spending by trillions of dollars. And what does that gotten us? It’s gotten us inflation.

“It’s a tax increase on families. And Joe Biden, by the way, promised he wouldn’t raise taxes on hardworking families. And yet, he already has because inflation hits the lowest income people the hardest. It’s a real problem created by Joe Biden’s taxing and spending policies. It’s already having a negative impact and it’s got to stop.”

“And then, one final point, because we started the appropriations process last week when Congress was not in session. The appropriators were here moving seven different bills, you know in Washington parlance they call those ‘mini-buses.’ We call them ‘bloated buses’ because it’s bloated with government spending on things like increasing more IRS agents, which is not what want we want to see. Policies like the Green New Deal which will make things cost more. It will raise energy costs for families. Not just at the pump, but their electricity bills will cost more and it’ll ship good, hard-working, middle-class jobs out of America to foreign countries. That’s what Speaker Pelosi pushed.”

On Democrats’ partisan attack on the Hyde Amendment:

“They try to push amnesty. But you know what they got rid of? They defunded Border Patrol as Tony Gonzales pointed out, but they also gutted the Hyde Amendment. And this is incredibly sad and disappointing because this has been for decades a bipartisan agreement where Republicans and Democrats came together since Henry Hyde, in 1976, put protections in place in law to say that taxpayer funds shouldn’t be used for abortion. And then, in the appropriations committee last week, on a partisan vote, Democrats gutted the Hyde Amendment.

“Well, the House Republican majority is not going to stand for that, and [Democrats] will not be successful. Speaker Pelosi and her allies will not be successful at gutting Hyde protections. But it’s very telling that that’s what their priorities are. Giving unfettered power – House, Senate, and White House – what are they trying to do? They’re trying to spend money like it’s going out of style. They’re trying to raise taxes on hard-working families and take taxpayer money and use it to fund abortion.

“Those aren’t the priorities of the American people. House Republicans will stand up and fight for those priorities for families all across this country.”