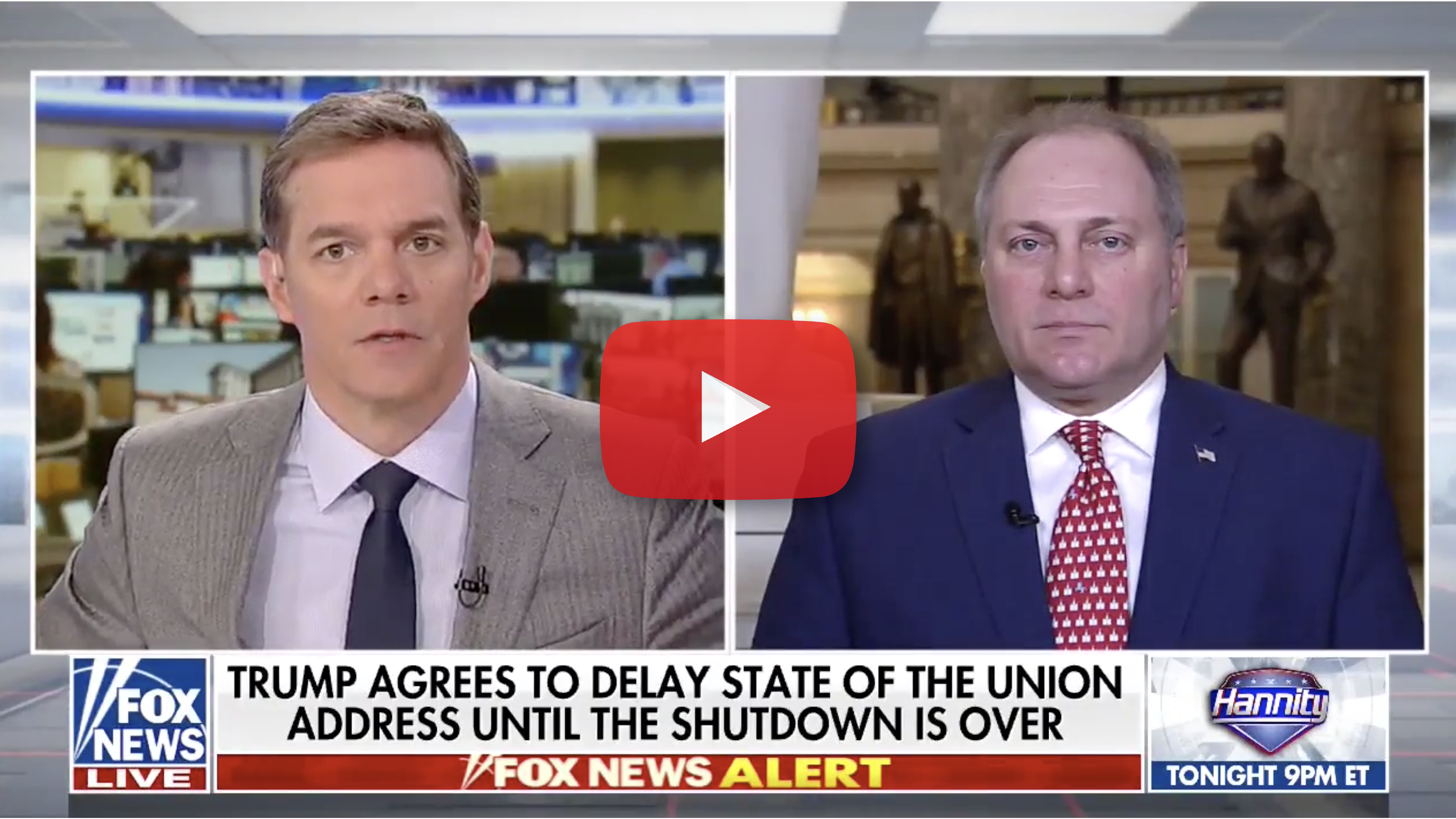 Click here or on the image above to watch the interview.
On Speaker Pelosi’s lack of interest in working with Republicans to reopen the government and protect the border:“I think everybody sees that there is a clear way out of this, but it involves Nancy Pelosi putting all those personal differences on the side, doing what’s best for the country and sitting down and negotiating with the President. President Trump has been here in Washington. He stayed here throughout Christmas. He has said over and over again he is willing to negotiate on all terms, on all fronts.

“He put DACA on the table on Saturday. The President spoke at 4:07 p.m. on Saturday. At 4:00 p.m. Nancy Pelosi had already put out a statement opposing what the president hadn’t even suggested. That just shows she has absolutely no … interest in solving this problem. The country demands that she put those differences on the side; put some kind of offer on the table to secure our nation’s border.”

On the growing number of Democrats calling for Speaker Pelosi to negotiate a solution:

“If you look at her proposals she has put on the table she has not put a single dollar on the table for border security and physical barriers. There are a growing number of Democrats here in the House that are finally saying, ‘Enough is enough; It’s time for Nancy Pelosi to put something on the table.’

“They support the President’s request for a wall. Even Steny Hoyer, the Majority Leader of the House, said that physical barriers should be part of the solution. It’s time for Nancy Pelosi to listen to a growing number of members not just of Republicans but Democrats in Congress who say it is time for her to actually negotiate. Put something on the table. This idea of literally slamming the doors of the House chamber and holding the State of the Union hostage. Enough is enough. Release all the hostages and let’s go get a deal.”

On Speaker Pelosi’s political stunt to cancel the State of the Union:

“[Cancelling the State of the Union] has never happened. George Washington in 1790 delivered an address to Congress on the State of the Union—the first time in history. Nancy Pelosi will go down as the only Speaker to rescind that invitation to the President. It is disgraceful. It is unbecoming of the office of Speaker. She needs to actually do her job.”

On Speaker Pelosi’s capitulation to the far left elements of her party:

“The President has done his [part]. He has put multiple offers on the table. Nancy Pelosi has yet to put a single offer on the table to secure our border and solve this crisis. I think that first of all it’s clear Nancy Pelosi has aligned herself with the most far left radical elements of her own caucus. It is a dangerous place to be to say that you will oppose national security.

“Ultimately, I think she is more afraid of the far-left elements of her base than she is understanding that this is a moment where she needs to step up and do her job and that is to negotiate.”

On the need for Speaker Pelosi to change her tactics and work with Republicans on a compromise:

“We don’t always agree. We have divided government, but part of divided government means you have to work with people on the other side. When a growing number of her own members of her party in the House are saying, ‘It’s time to resolve this and put border security money and wall funding on the table,’ she has to listen to them. It’s a growing number. I think the pressure is building on Nancy Pelosi.

“You are seeing more Democrats in Congress calling on her to solve this and to ultimately work with the President to find some kind of agreement. When you see the President putting offer after offer on the table and saying, ‘Here is another approach to it.’ Before the President even submitted his latest proposal on Saturday, Nancy Pelosi called it a non-starter and said she was opposed to it.

“She said you have to pass the bill to find out what’s in it. On Saturday she said she is going to oppose the plan before she finds out what’s in it. Enough is enough of this kind of foolishness. It’s time to do your job.

“Everybody has to come to the table. I’ve been in those meetings in the Situation Room in the White house where the President said, ‘I’m willing to renegotiate on the term wall and ban cement structure. We’ll go to steel slats. They’re more effective at securing our border.’ Not one time have they put a counteroffer on the table. He is putting more options on the table to solve the problem.”