Whip Scalise blasted Speaker Pelosi for her decision to bring a bill to the House Floor that would severely limit the number of new life-saving drugs entering the market during a global pandemic. Whip Scalise also criticized the United States Supreme Court’s ruling on June Medical Services v. Russo which fails to protect innocent life and rips away basic safety standards for women. 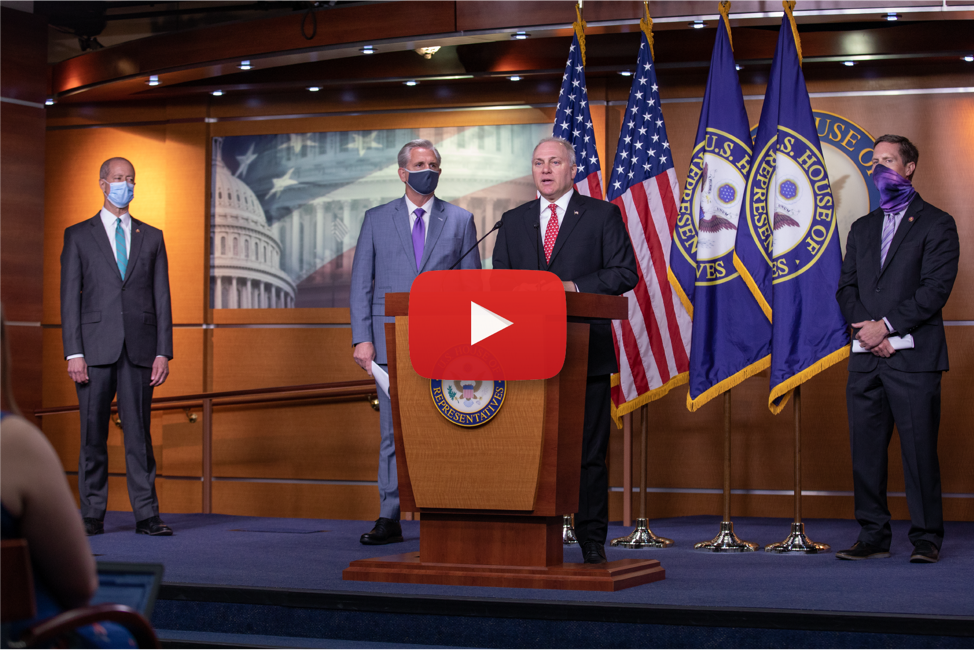 On Speaker Pelosi’s radical ‘My Way or the Highway’ bill:

“This is Pelosi’s ‘My Way or the Highway’ bill, which should have been a surface transportation bill where all sides work together. She continues to go at it alone and literally say, ‘It’s her way or the highway.’ Instead of helping our communities rebuild their infrastructure, she’s focused on trying to push the radical Green New Deal, this agenda item from the socialist left that would much rather focus on making airplanes have to put solar panels on their wings than allow the airline industry to come back, for example. We should be focused on building roads and bridges, not on passing an agenda that would raise energy prices for all hard-working families across this country.”

On Speaker Pelosi’s attempt to limit the number of life-saving drugs entering the market during a global pandemic:

“Every estimate that’s come out has said it would be harder to bring new drugs like a COVID-19 vaccine to the market, and yet, that’s what she wasted the House Floor’s time on. What world are they living in and what crises are they trying to address when they’re going to make it harder, not easier, but harder to find a cure for COVID-19 passing a partisan piece of legislation like that. Once again, Speaker Pelosi’s way or the highway, not wanting to work with Republicans to solve problems. Actually, making it harder to do things like find a cure and a vaccine for COVID-19. It’s just mind boggling that this is what her agenda is, but it should be eye-opening to everybody that that’s her approach. Clearly, it’s the Joe Biden approach to push a radical socialist agenda.”

On the Supreme Court’s failure to protect innocent life:

“If you want to know just what’s at stake [in November], you can look at the incredibly disappointing decision by the United States Supreme Court yesterday on the Louisiana law that was set up to improve safety standards for women. You look at the bill that the Court struck down yesterday, it was a bill that moved through the Louisiana legislature with a very bipartisan coalition. The lead author was a Democrat, the governor who signed the bill was a Democrat, and the Court struck it down. Not because women brought forward a case saying they’re having a harder time getting access to health care, no, it was actually an abortion provider who brought the case because he didn’t want to follow higher safety standards for women. And I’m so disappointed that Justice Roberts flip-flopped on those to not uphold his oath to the Constitution, because as a Supreme Court justice your oath is to uphold the Constitution and follow it as it’s written, not to move around with the winds of change, and yet, that’s what he did. He upheld the prior failed rulings of the Supreme Court instead of upholding the Constitution in his ruling in a 5-4 decision that was a defeat for women’s health standards. It’s incredibly disappointing, but it shows what’s at stake this November.”