“If you’re voting no, you’re voting for the status quo on a stagnant economy, and I sure wouldn’t want to have to go back home and explain that.”

WASHINGTON, D.C.— House Majority Whip Steve Scalise (R-La.) joined Fox News Channel’s Your World with Neil Cavuto this afternoon to make the case that there are no excuses for Congress not to pass tax reform that will allow families to keep more of their hard-earned money in their pockets, while increasing wages and job growth to rebuild our economy and our middle class. 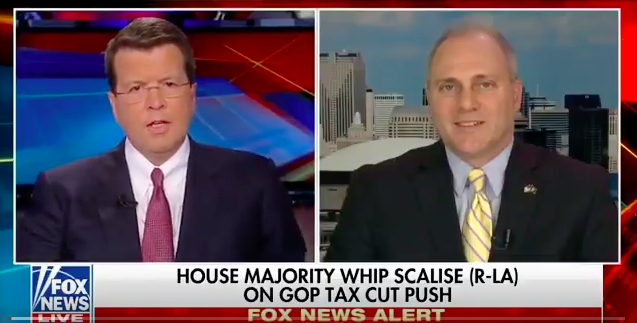 Click here or on the image above to watch Whip Scalise’s interview with Neil Cavuto on Fox News.

On getting back to work:

“I’m feeling really good. I still have a lot of rehabilitation to go, but boy, I’m lucky to be alive and it’s just really good to be back to work and back in my district getting to see friends I haven’t seen in a long time.”

On getting tax reform done quickly:

“It is doable. And you know, this is the time to get things done and this is the biggest thing we can get done–and that is to lower taxes for everybody, to make our country competitive again, to rebuild the middle class, Neil. I mean, you look what’s happened over the last 10 years and we’ve seen the middle class evaporate, we’ve seen jobs move overseas. We can reverse that quickly through tax reform and that’s what our bill will do.”

On the Democrats’ obstruction:

“Well you know, you still see that class warfare being played on the left and frankly that whole approach to governing was rejected in the last election. Donald Trump ran as a businessperson who was going to bring jobs back, who was going to ‘Make America Great Again,’ and you know, the quickest way to do that is through tax reform, which means you lower taxes for everybody. Don’t play, ‘hey I want my taxes lowered but I don’t want somebody else’s lowered.’ Let’s lower everybody’s taxes, but more importantly, let’s make America competitive again and bring jobs back to America that left to foreign countries. You know, why criticize companies that send jobs overseas? Let’s talk to them and say let’s bring the jobs back to America, and we can do that. Let’s do that now and let’s get it done.”

On the urgent need for tax reform:

“Well if you really want to get the economy moving, which I do, you do it all immediately. Whatever you’re going to do–if you stagger it, you delay it–all that means is you’re going to delay the growth and the success of this economy and you’re going to delay the jobs. We don’t need to wait any longer; we’ve been waiting 10 years to get real economic growth. Let’s get it started now. President Trump wants to get it started now and I’m real excited to be back working with him. Let’s go and and get this done and make these effective immediately so we can see the real economic boost, and again, rebuild the middle class that evaporated over the last 10 years.

“What I know is, we need to get this done. This is not only a promise that was made to the American people, but it’s also something that can really unleash the potential of the American economy to create more jobs and rebuild our middle class: that’s why we need to get it done. My focus is let’s lay the plan out, let’s build a consensus to get it passed, and then let’s see the economy take off like nothing we’ve seen since 1986, which is the last time, by the way, that we’ve reformed our tax code.”

On the plan’s focus to increase wages for American workers:

“I think what we’re looking at right now is wages. Wages have been stagnant for 10 years now and a lot of that’s because of the slow economic growth. When you see the country hovering at a 1.9%, 2% economic growth, that ultimately results in a lot of bad things for middle class families. In fact, for most people, it means they haven’t seen a pay raise in a long time. Under our plan, a new report just came out this week that shows if the Republican tax cut bill passes, the average family will see $4,000 more in their paychecks, plus they’re going to be paying lower rates, and oh by the way Neil, under our plan we simplify the tax code so much that over 90% of Americans can actually fill out their taxes on a postcard. Imagine how big of a benefit that’s going to be to people who, not only are they going to have more money in their pocket, but they’re also going to have the simplicity of the tax code that they don’t have to go pay somebody money to go do their taxes. They can do it themselves and then maybe use that money to go on a vacation or add on to to their house.

“You ought to be focused on how you can vote for something that’s going to create jobs and rebuild the middle class. And I’ll tell you this: Chairman Kevin Brady, the Chairman of the Ways and Means Committee, has been doing a great job of working with all of our members to address concerns they’ve got to make sure this plan works for everybody, all sections of the economy. And, again, what the main focus is getting the economy back on track, creating jobs, and bring all of those tens of thousands of high paying jobs that left America–bring those back to America, bring those jobs back home. That’s what our plan does.”

On the importance of Senate action:

“Well I know this: if you look at the health care bill, which the House passed, President Trump worked day in and day out to help us get the votes to pass that bill. That was a very tough bill to pass out of the House; frankly, I wish the Senate would’ve worked harder and stayed and got it done. They missed it by one vote, we passed it with one extra vote. And President Trump was critically involved in helping close a lot of those votes and he’s going to be important to us passing this tax reform bill and you’re already seeing him out front talking about how this is going to help rebuild the middle class.

“In the end, this is going to have to be a process where everybody has to vote on a bill and hopefully whatever personal issues you have with somebody else, when you’re casting an important vote–a vote that important that has a major implication on the economy in the future of families across this country–you’re voting based on the policy, and this is really good policy. This is a win for American families who have been waiting for their taxes to be lowered, waiting for the jobs to be brought back to America and to see the middle class built back up again. This is going to be an important vote that’s bigger than any one person or some spat somebody might have had with an individual.

“I think this vote is going to be so important, especially after the failure of health care in the Senate, the fact that they couldn’t get that done, this is the biggest thing that they can do, and we can do, to get this economy moving again. That’s where the focus needs to be.Let’s go create those jobs. Let’s go get our economy back on track and you can vote yes to make that happen, and if you’re voting no, you’re voting for the status quo on a stagnant economy, and I sure would’t want to have to go back home and explain that.”