As Americans across the country hit the road for the Fourth of July holiday, they’ll discover what has become the new normal in Joe Biden’s America — soaring gas prices.This week, the national average gas price per gallon reached $3.09. This is the highest level for this holiday weekend since 2014. With the American Automobile Association predicting that 43.6 million Americans will hit the road this weekend, demand will only climb as supply bottlenecks across the country struggle to keep up. For drivers, the only result will be higher prices at the pump for the foreseeable future.This problem, however, clearly doesn’t concern President Biden and Congressional Democrats. This week, they championed their wasteful, partisan infrastructure bill that promotes radical Green New Deal mandates and overburdensome regulations instead of much-needed improvements to America’s infrastructure.

White House Press Secretary Jen Psaki even admitted that the Biden Administration wants taxpayers to fund 500,000 electric vehicle charging stations across rural America. This will be a tough sell to farmers and ranchers who can’t find workers.

Republicans are focused on achieving a significant infrastructure overhaul through common-sense solutions that reduce red tape and direct spending toward upgrading America’s roads, bridges, waterways, and broadband. Unfortunately, Democrats chose to continue down the road of partisanship instead of real reform. 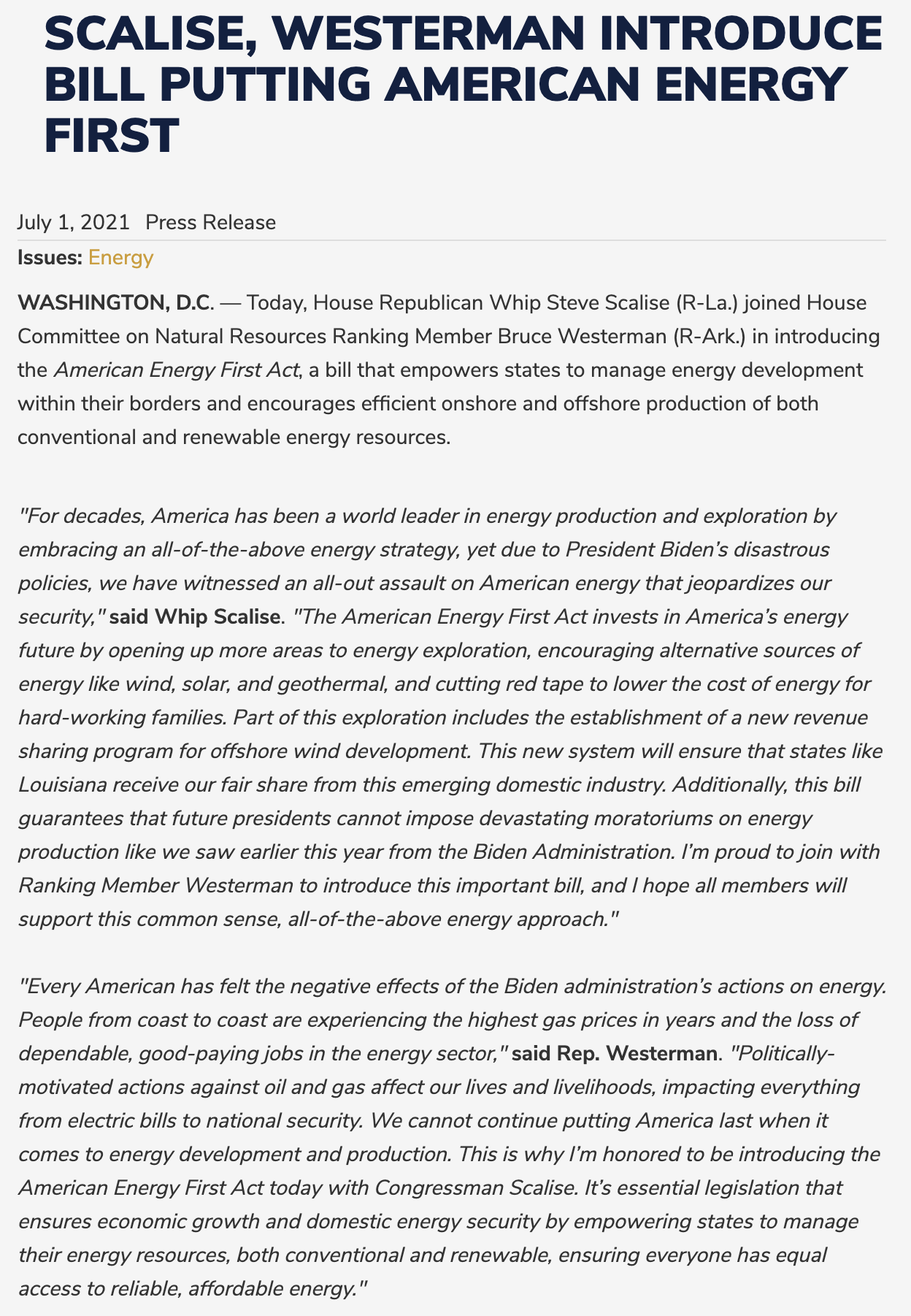 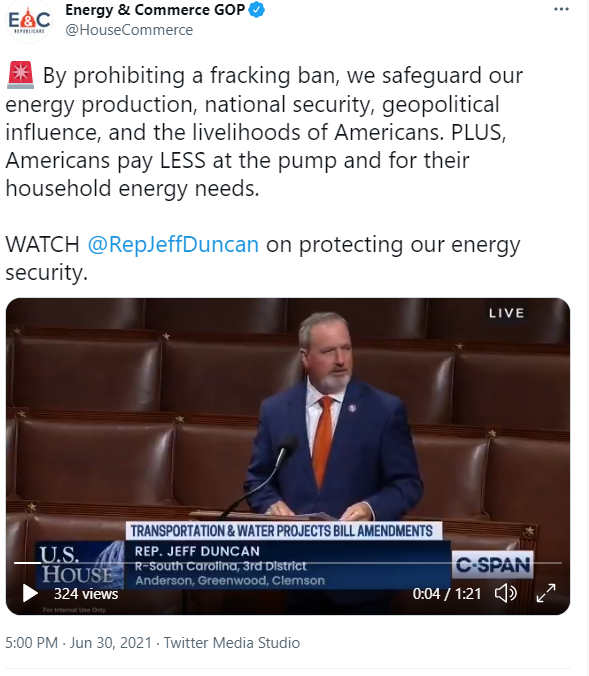 Energy and Commerce Subcommittee on Environment and Climate Change Ranking Member David McKinley, P.E. (R-W. Va.) pressed the Biden Administration on the devastating impacts of transitioning to 100 percent renewable electricity like higher utility bills and the loss of jobs. During his questioning, he also highlighted the fact that to replace just one coal power plant with windmills would require a landmass larger than the size of Houston, Texas, or 4 times the size of Energy and Commerce Chairman Frank Pallone’s district in New Jersey – 850 square miles. 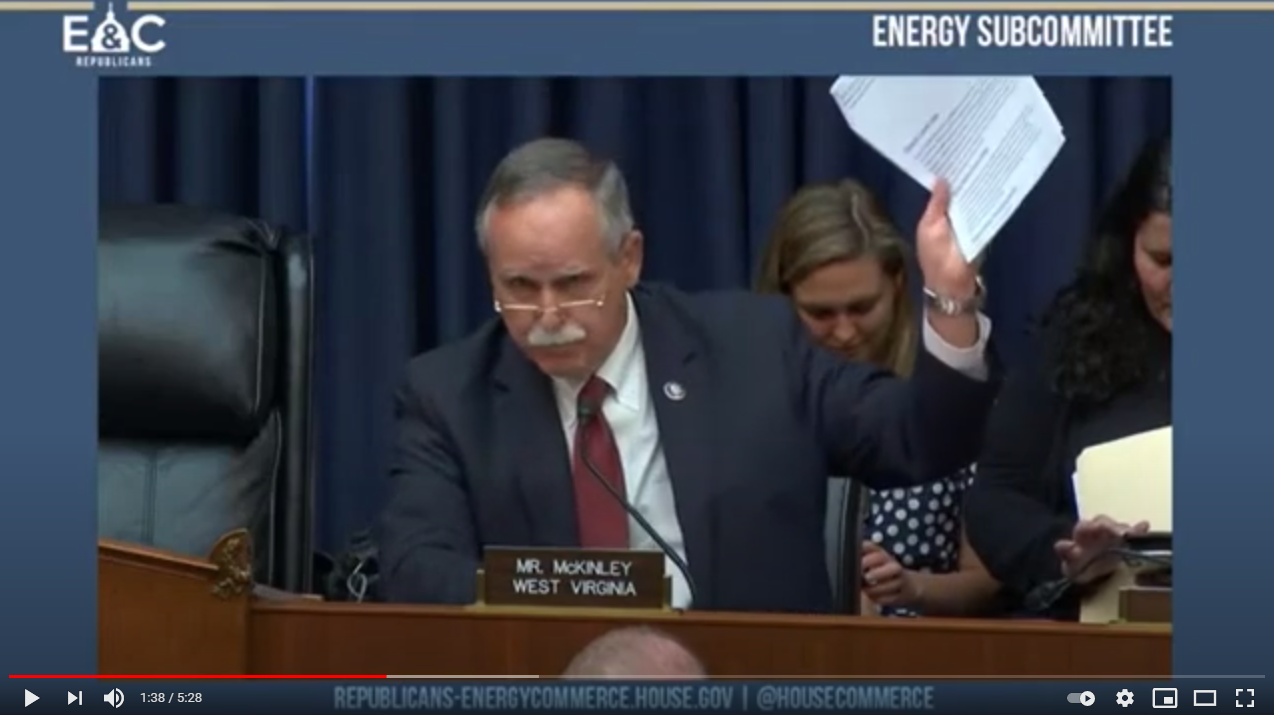 In an Energy and Commerce Subcommittee on Energy hearing, Representative Debbie Lesko (R-Ariz.) bashed Democrats’ terrible legislation that could force Arizona companies to be governed by the governor of California and could increase utility rates for consumers. Rep. Lesko also pointed out that Democrats’ policies will drive up prices and hurt reliability because their timeline for switching to clean energy is totally unrealistic. 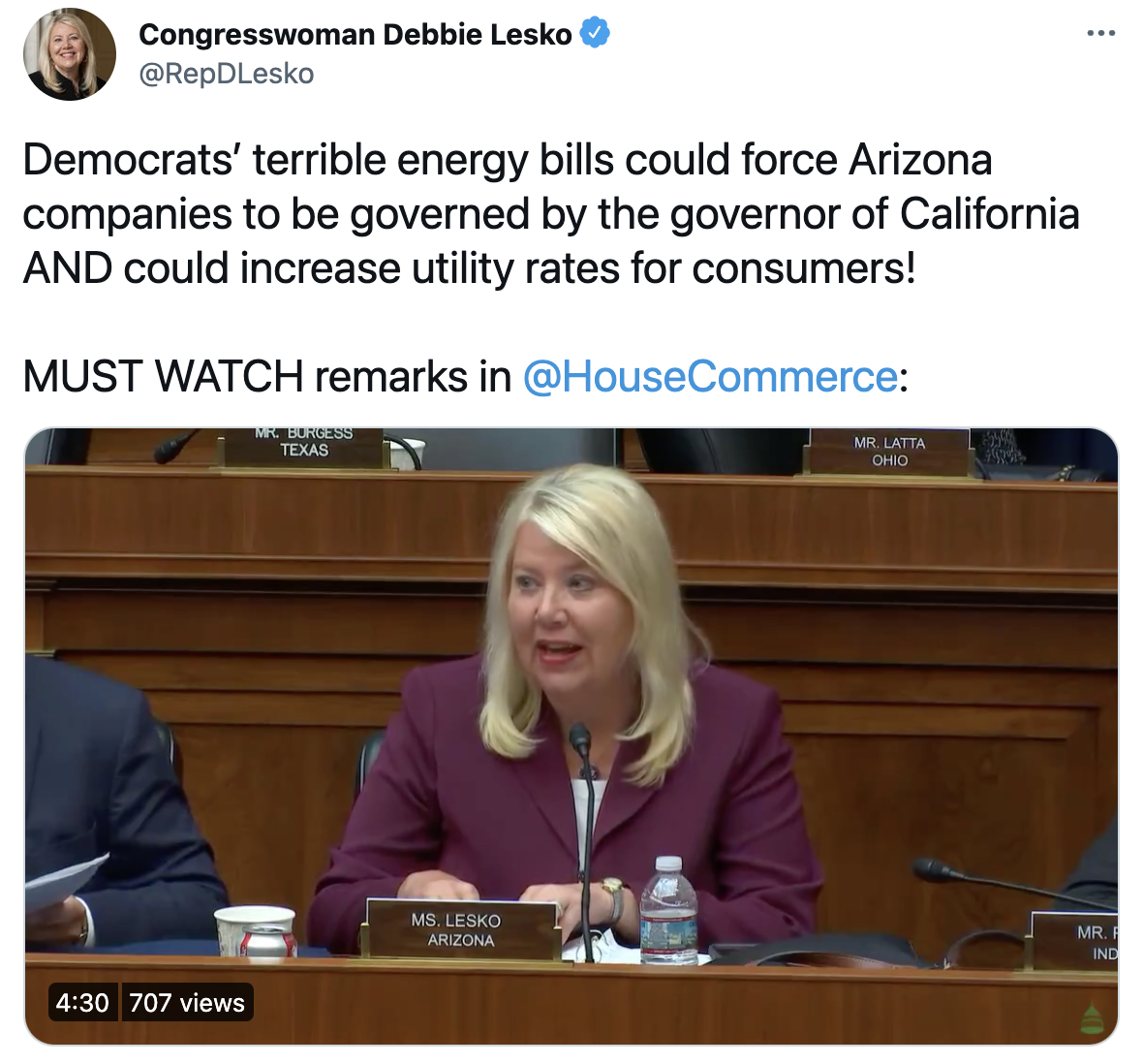 Representative Kevin Hern (R-Okla.) introduced the Energy Poverty Prevention and Accountability Act to ensure the radical left is held accountable by requiring transparency and accountability with new energy bills, regulations, and presidential actions. Rep. Hern’s bill also states that the Biden Administration can’t impose its leftist energy agenda without a thorough assessment and report on how specific actions, such as declaring a moratorium on the leasing of federal lands, prohibiting or delaying permits, and withdrawing federal land from forms of entry, impact energy costs for at-risk communities. 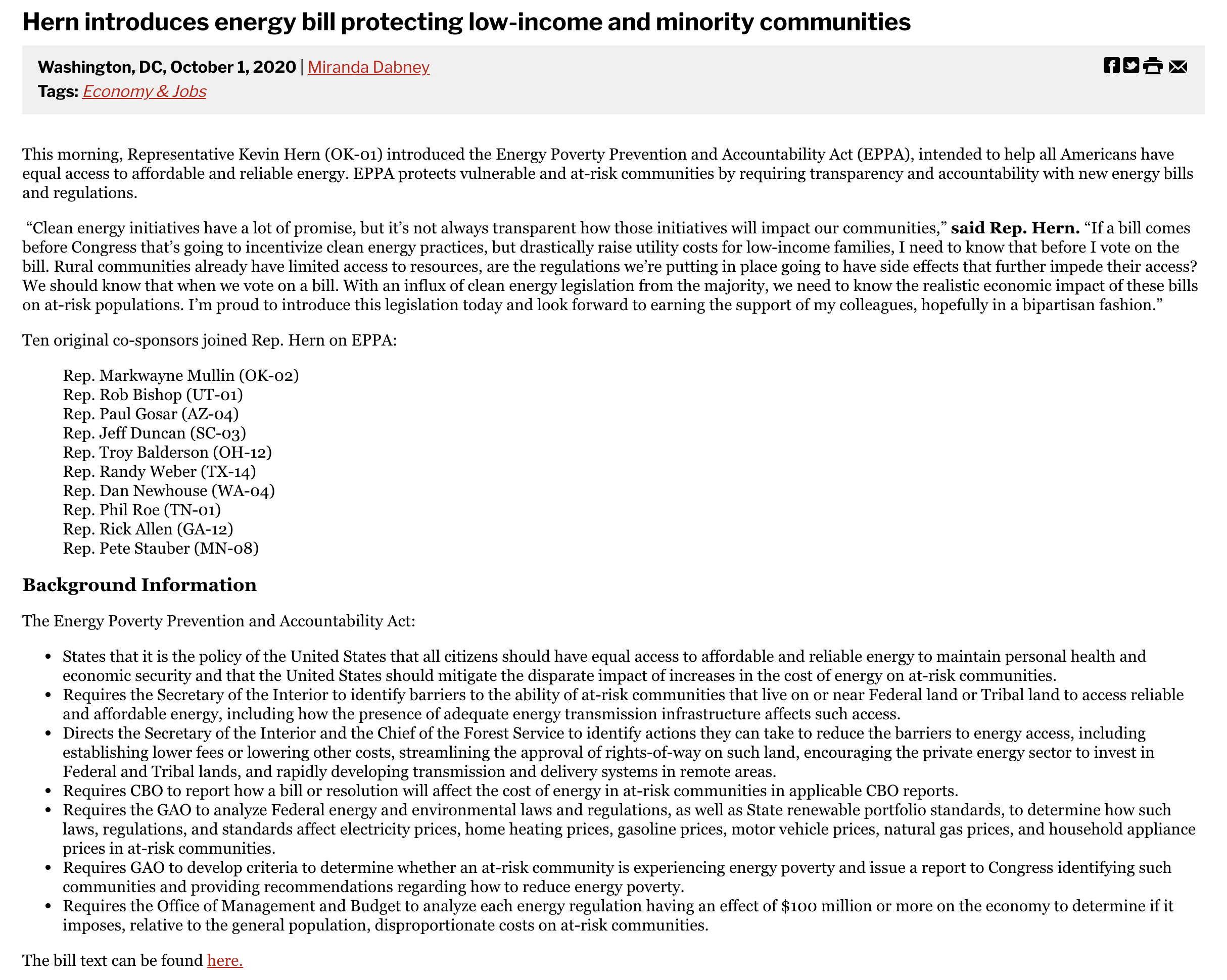 In an Energy and Commerce Subcommittee on Energy hearing, Representative Greg Pence (R-Ind.) discussed efforts Congress can make to advance grid modernization and current innovation being done by energy providers in Indiana. 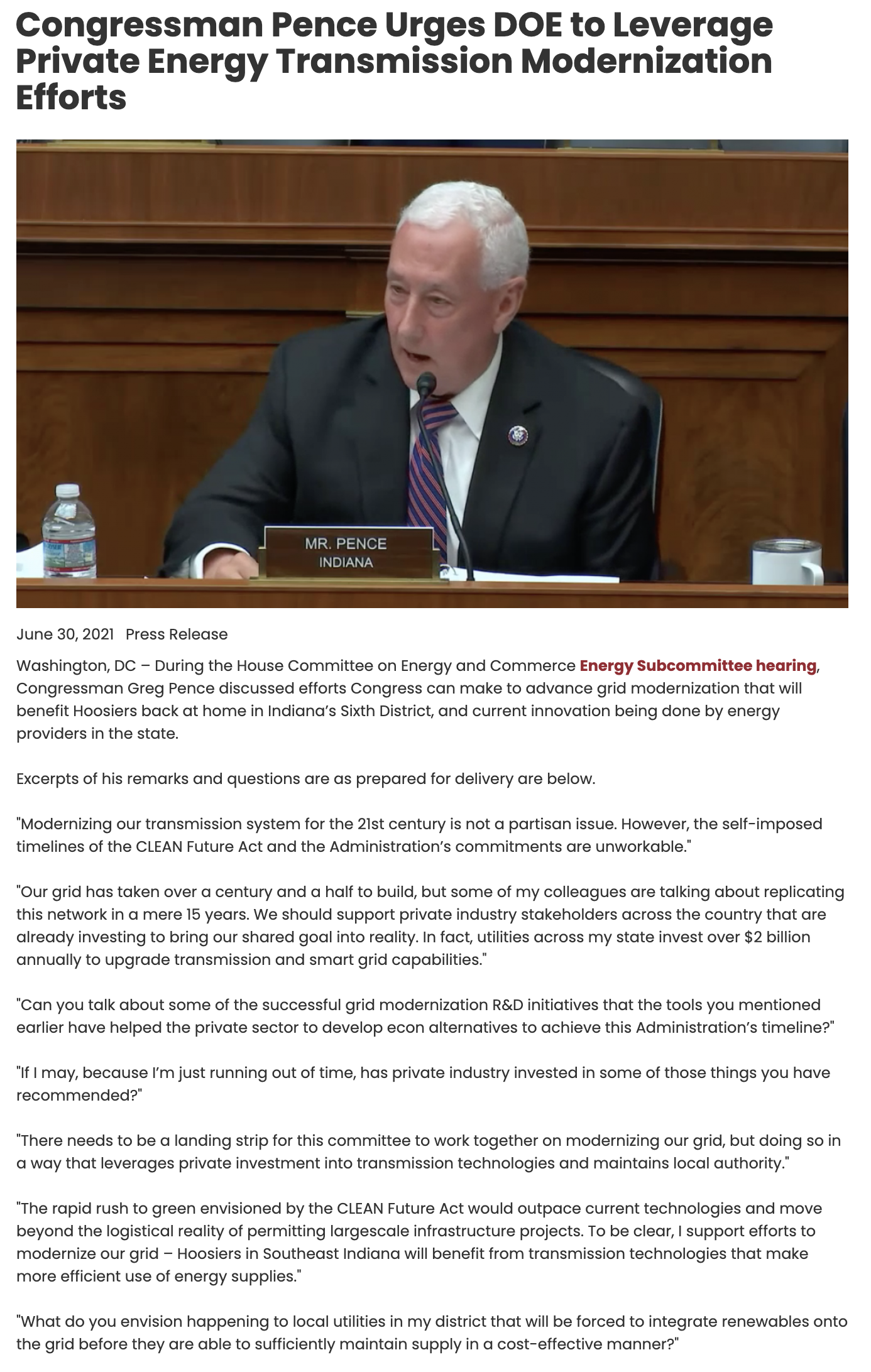 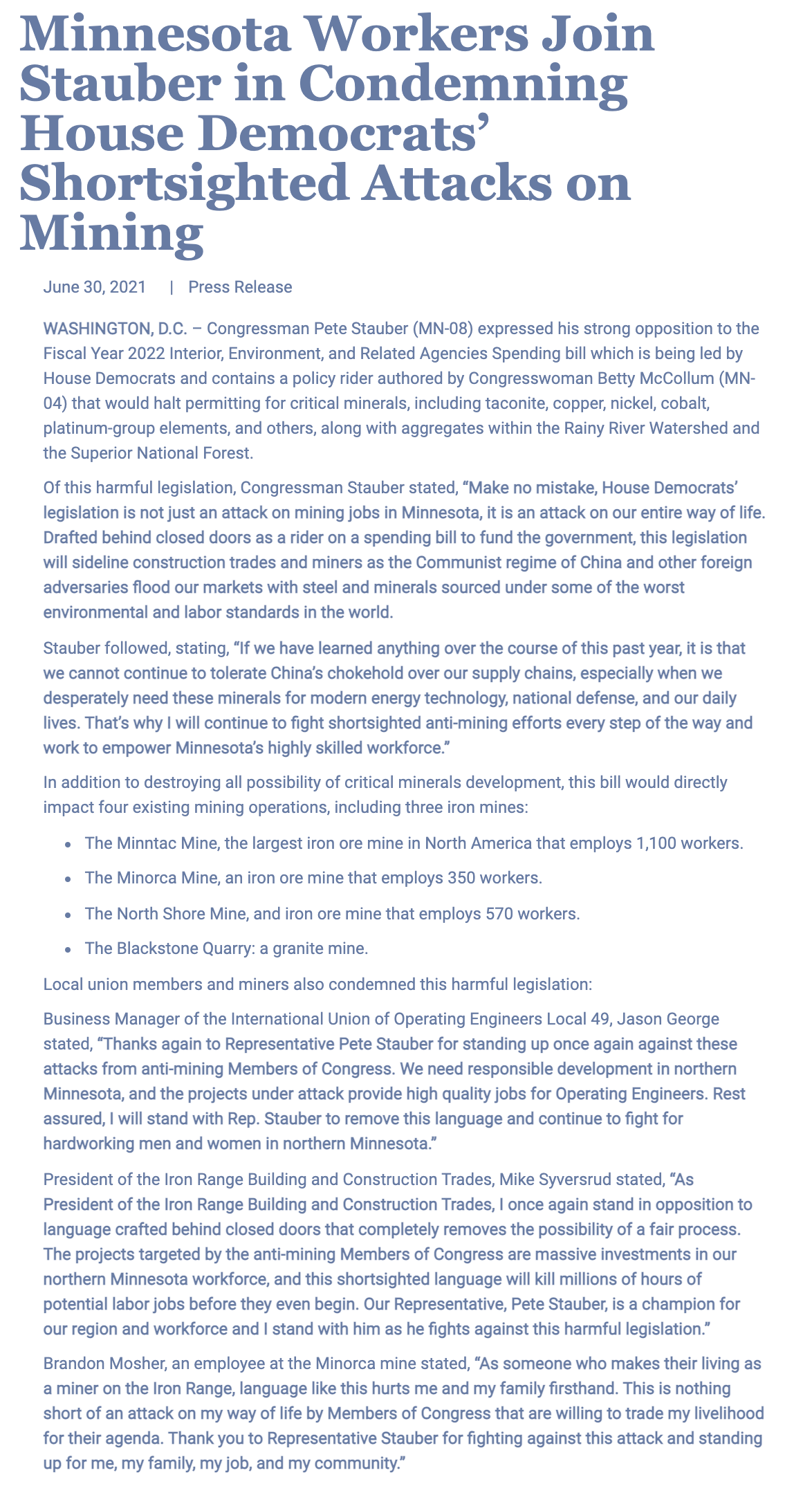 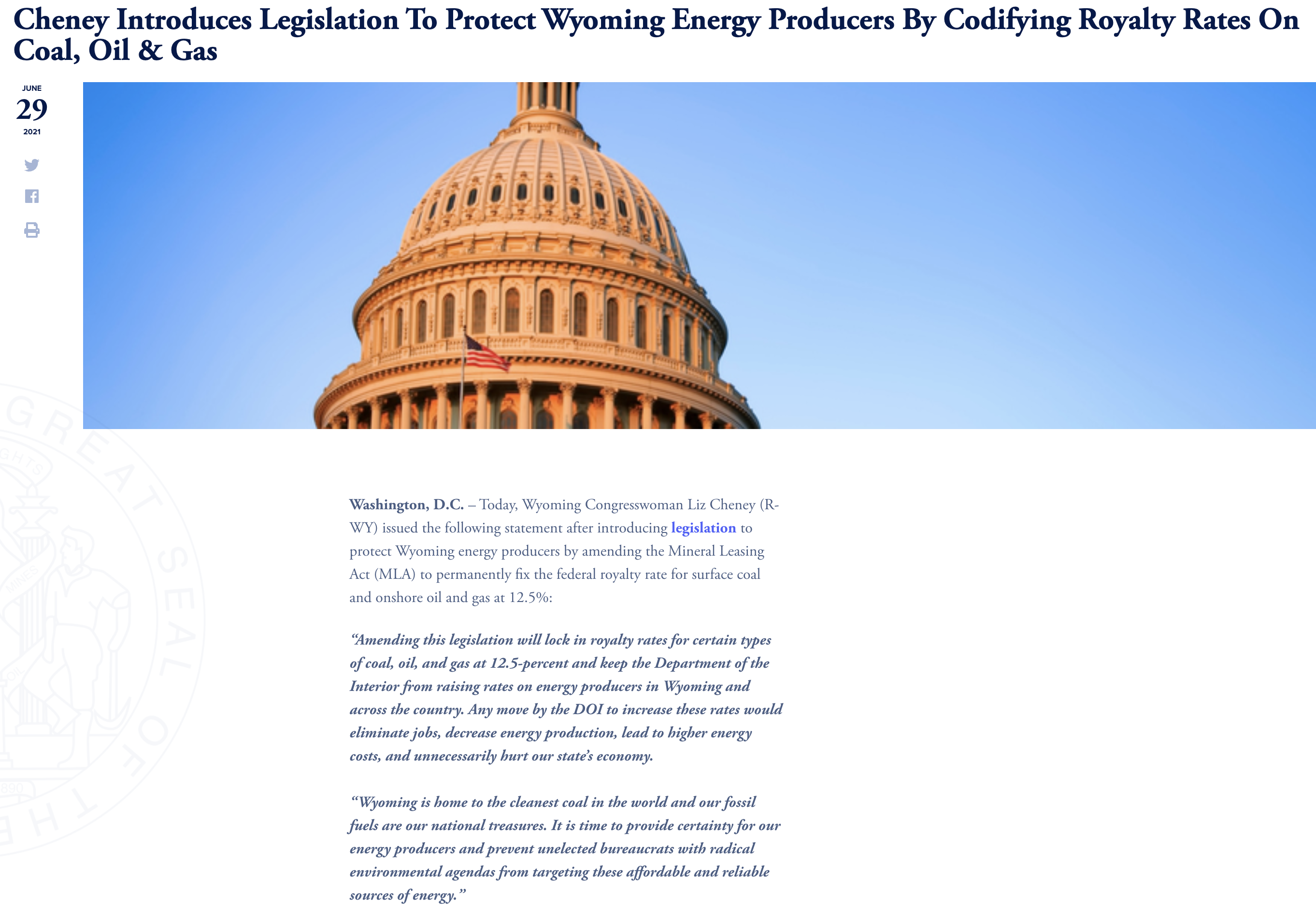 On the House Floor, House Energy and Commerce Committee Republicans spoke out in opposition to H.R. 3684, which is Democrats’ hyper-partisan infrastructure bill modeled after their job-killing “Green New Deal.” 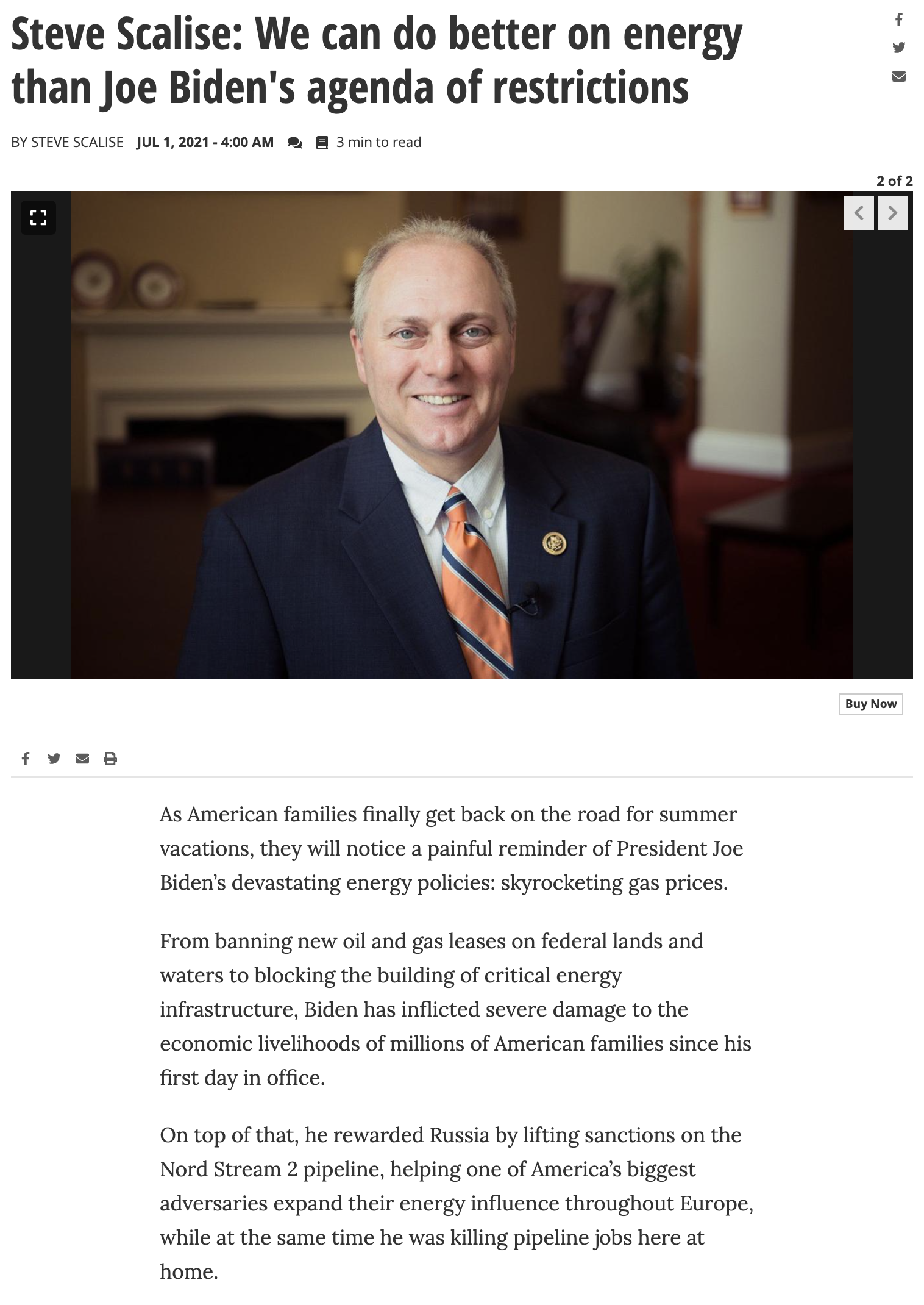 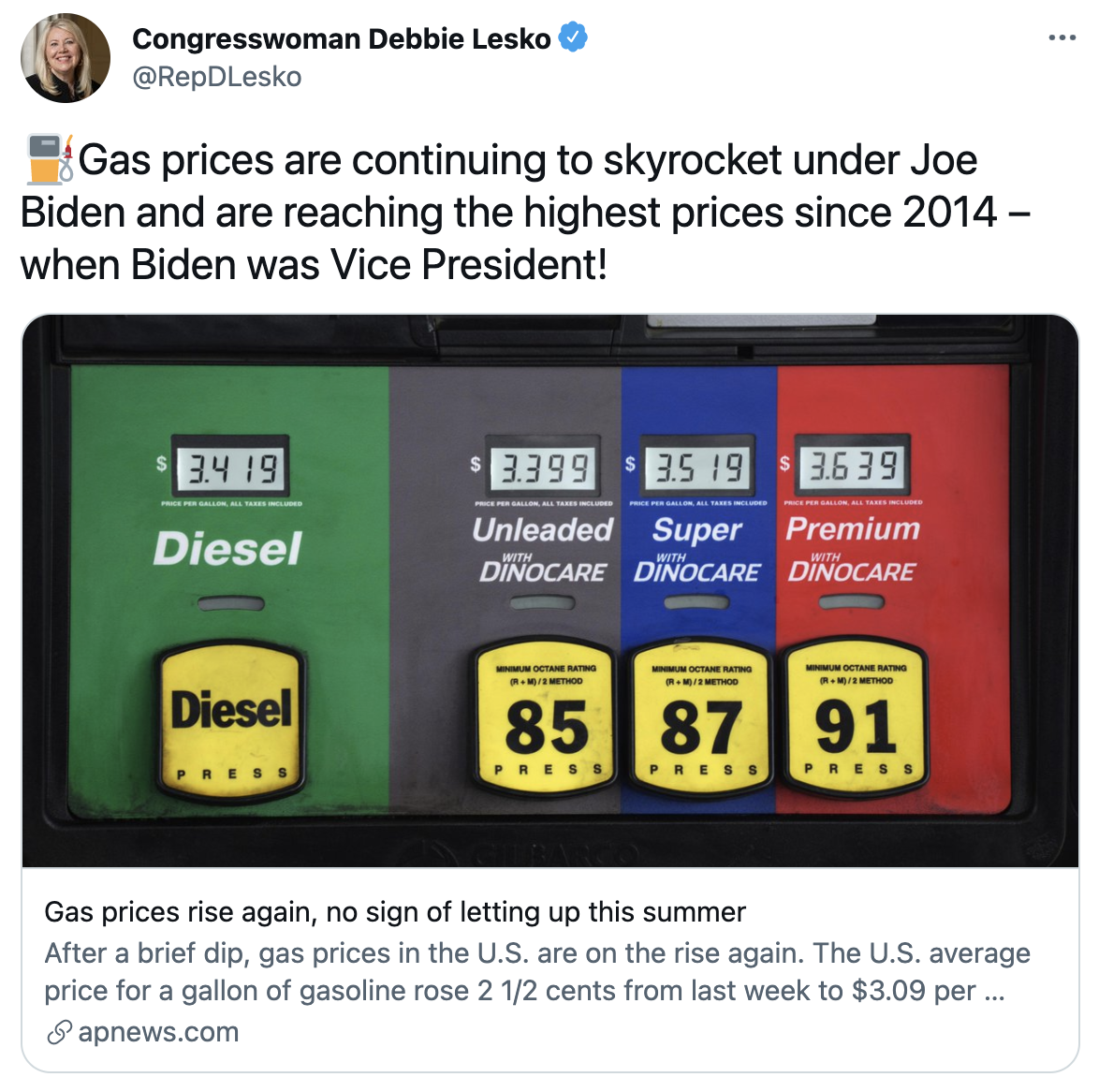 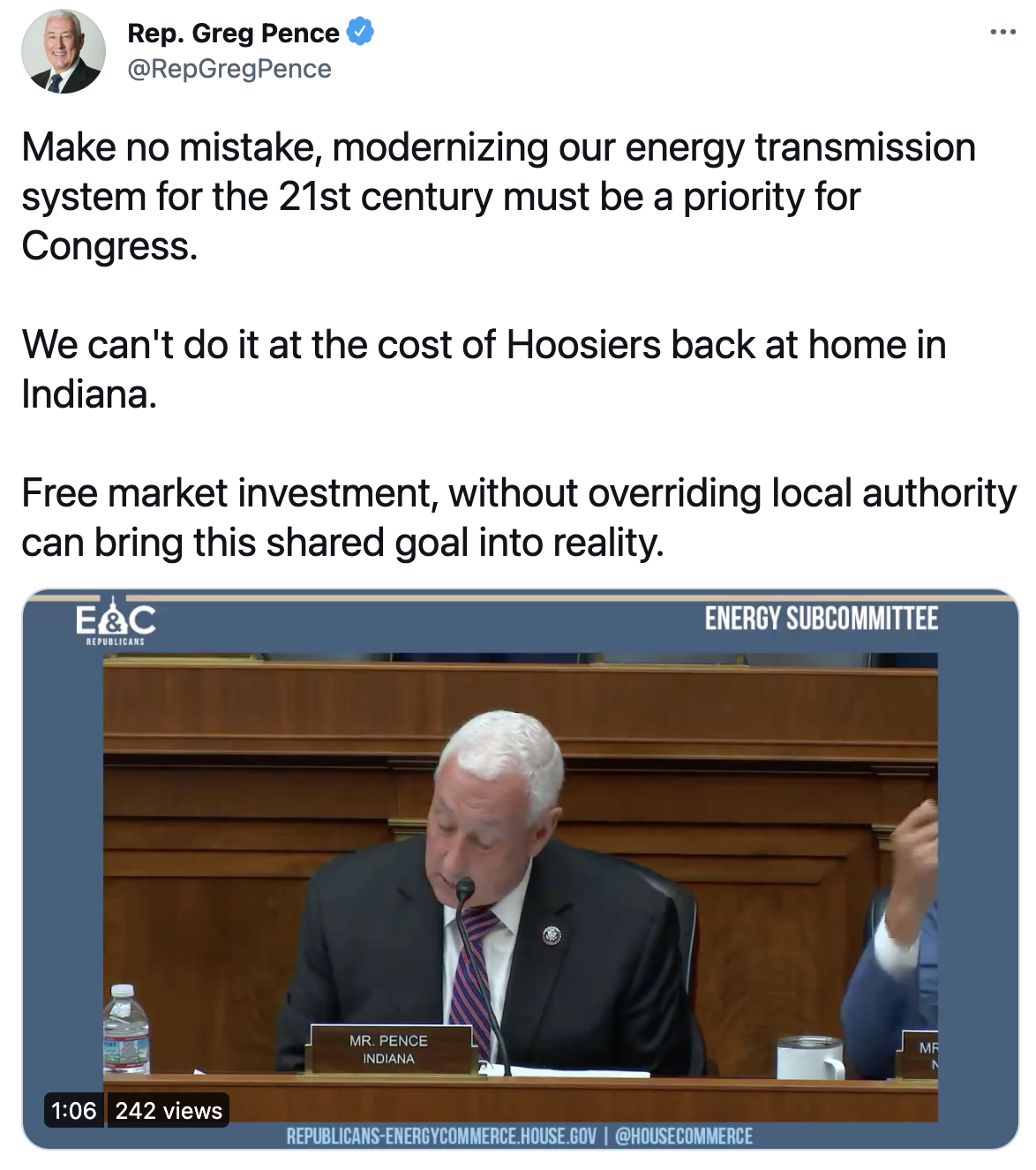