The HEAT Report is a weekly newsletter focusing on how members of the House Energy Action Team (HEAT) promote American energy security, and an all-of-the-above energy economy.
The Latest:
Last week, President Biden and Speaker Pelosi failed in their attempt to ram through a massive $5.5 trillion tax-and-spend proposal that would deliver a deathblow to American energy companies and increase our reliance on countries like China and Russia which emit more carbon to produce their fossil fuels. This plan for increased taxes and mandates will mean a bleak future for American families.The ongoing energy crisis in Europe shows us exactly where the U.S. is headed if President Biden and Speaker Pelosi are allowed to destroy the fossil fuel industry and surrender our energy independence in the name of the Green New Deal.

Europe’s over-reliance on renewable energy and its systematic dismantling of base load power generation has led to record-high utility prices with no end in sight. Just like Biden has turned to OPEC+ to bail him out as prices in the U.S. continue to rise, European countries are scrambling to get their fuel from countries like Russia. Once again, these energy-killing policies are strengthening our adversaries while leaving families on the financial hook. Growing opposition to President Biden’s socialist agenda shows that American families reject higher taxes and more mandates. We should be focused on helping fight for American small businesses, lowering inflation, and returning to American energy dominance — not spending trillions of dollars on new taxes and spending that would crush the American economy and decimate low-income families.

Representative Stephanie Bice (R-Okla.) toured a drilling rig in Rush Springs, Oklahoma, with Marathon Oil. The company is returning to operations in Oklahoma, with five drilled but uncompleted wells targeted for production starting in the second half of 2021 to take advantage of favorable natural gas and pricing for natural gas liquids. 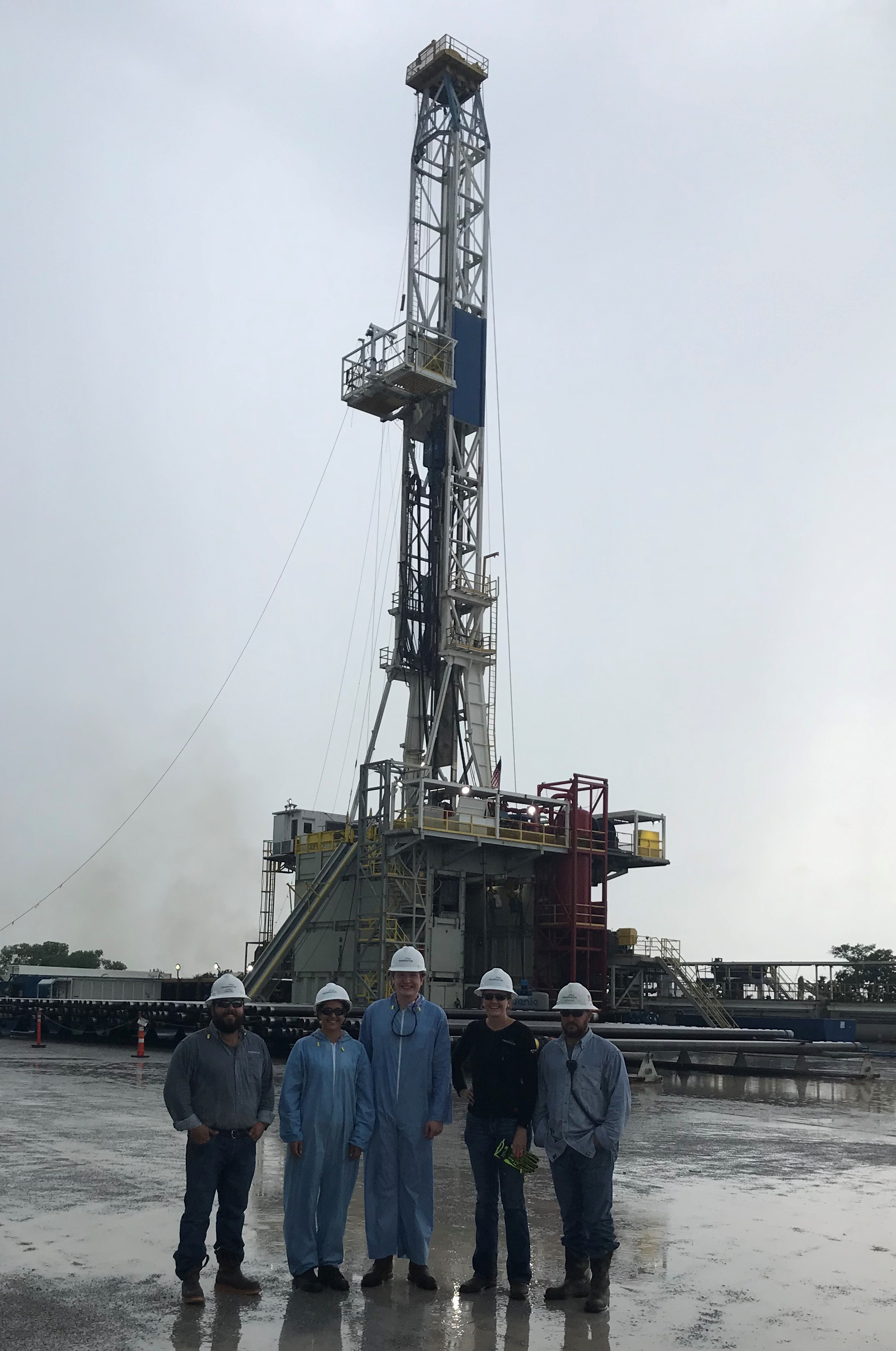 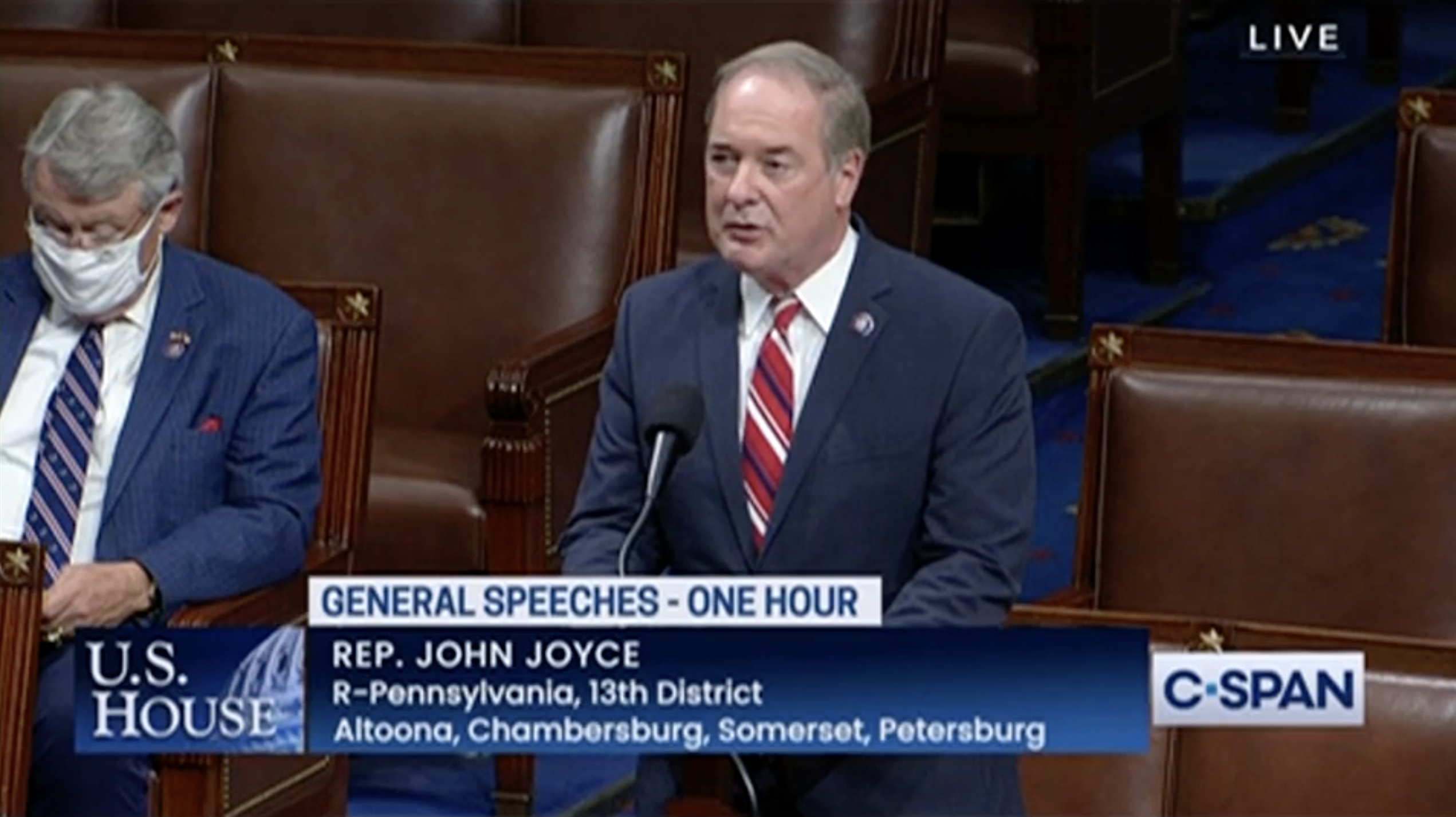 Representative Garret Graves (R-La.) released a statement after the Bureau of Ocean Energy Management announced it will hold an oil-and-gas lease sale for the Gulf of Mexico on November 17, after a federal judge overturned the Biden Administration’s illegal ban on lease sales. 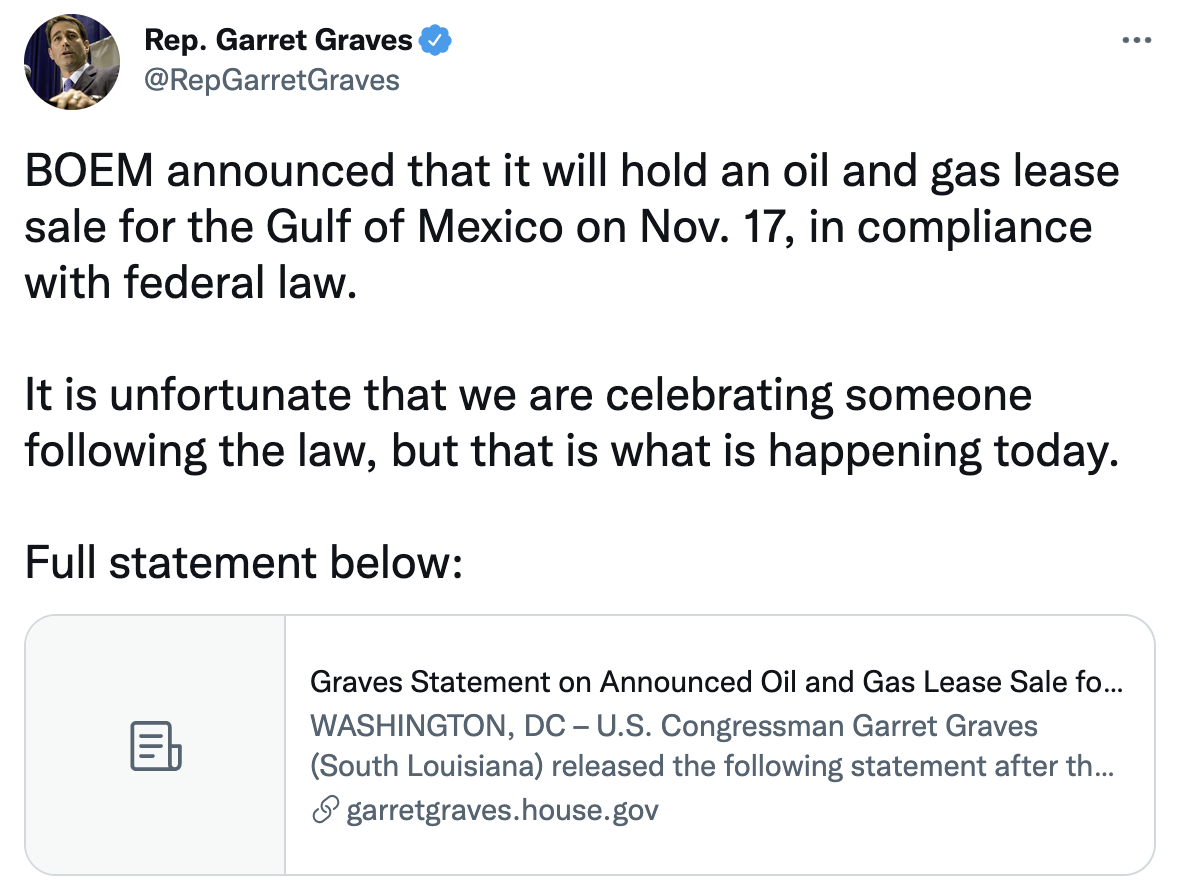 Energy and Commerce Subcommittee on Environment and Climate Change Ranking Member David McKinley, P.E. (R-W. Va.) led a West Virginia Congressional Delegation letter to the West Virginia Public Service Commission, encouraging the Commission to approve a proposal to allow upgrades to move forward at three coal-fired power plants to preserve their useful lives through 2040. Representative McKinley also joined 11 members of the Congressional Coal Caucus in writing a letter to the Biden Administration regarding an Export-Import Bank announcement that the U.S. will support an Organization for Economic Cooperation and Development proposal to end the financing of overseas coal-fired power projects. 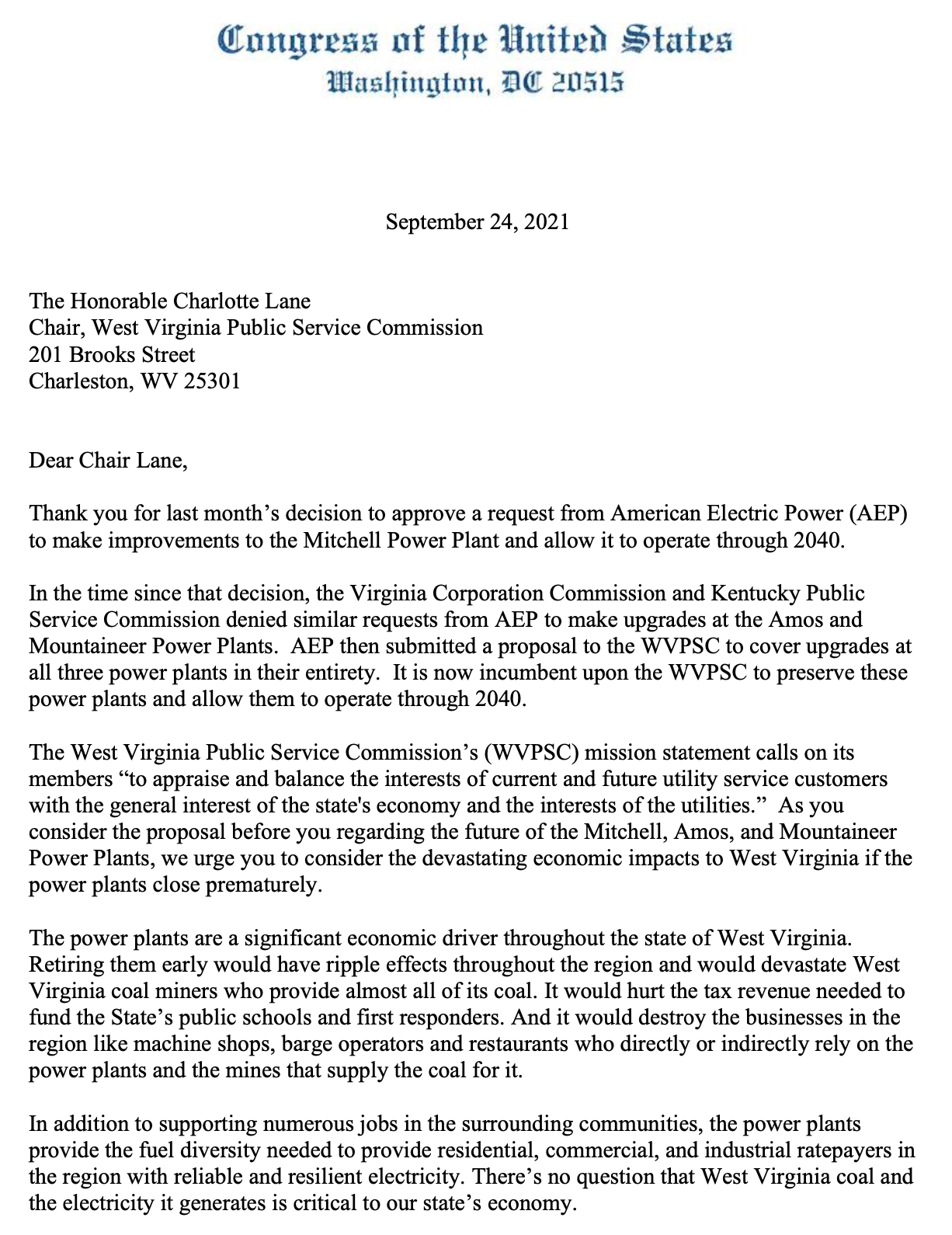 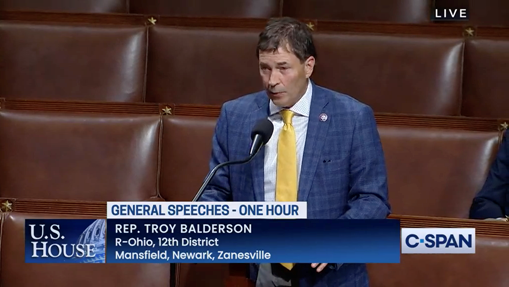 Representative Larry Bucshon (R-Ind.) filmed a video for Clean Energy Week, highlighting his work to promote reliable and affordable clean energy like hydropower for communities in Indiana and across the United States. 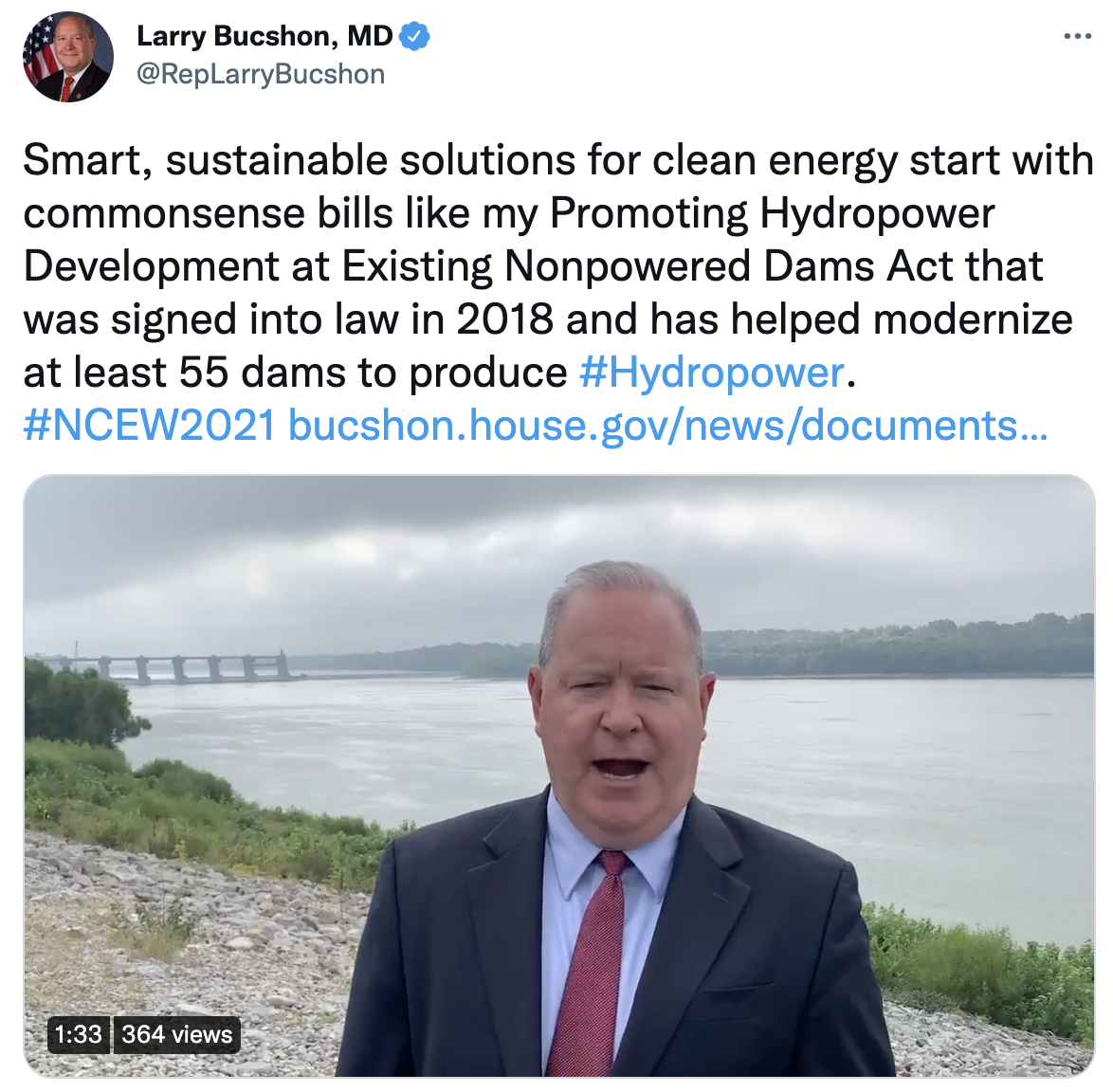 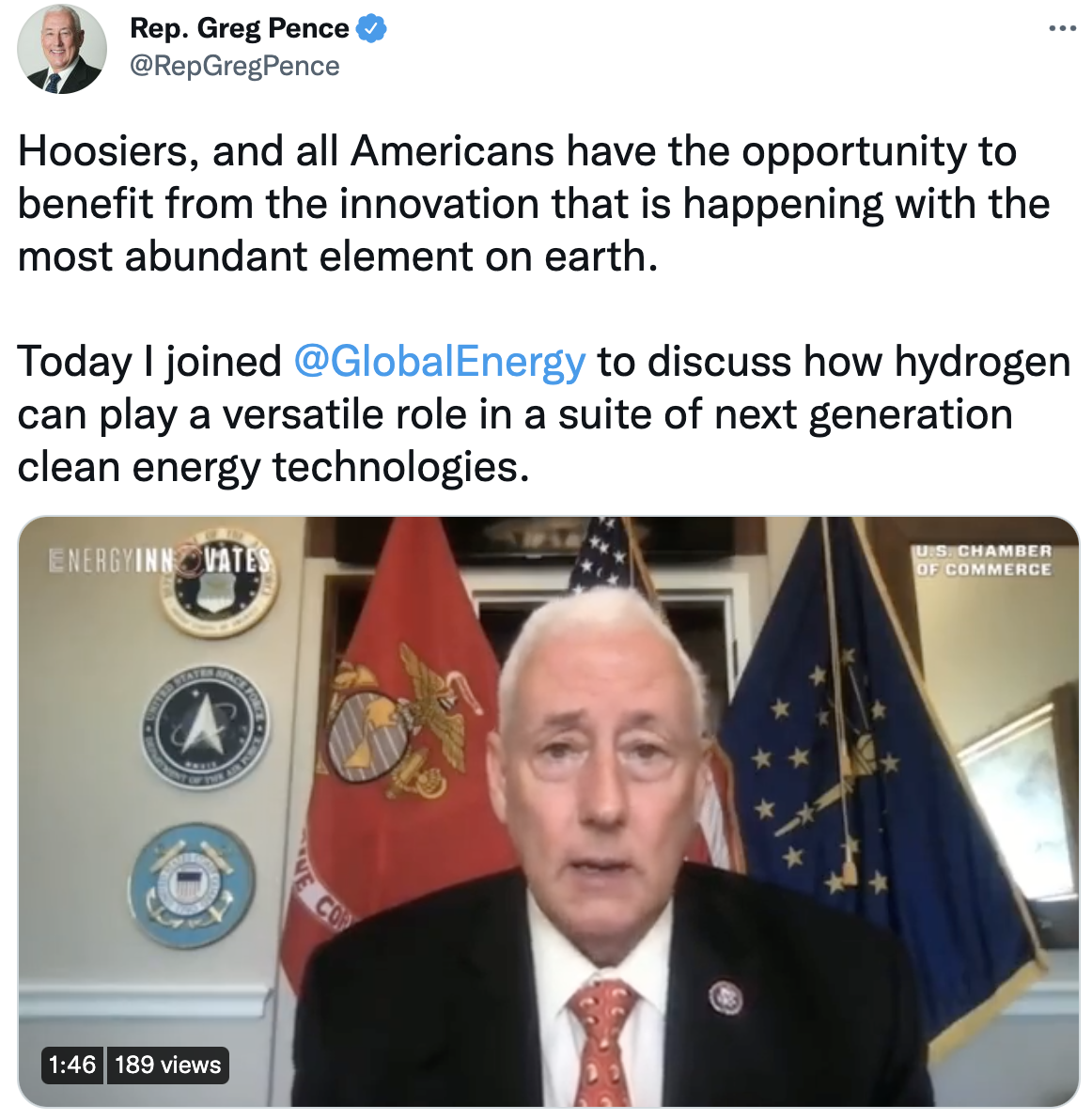 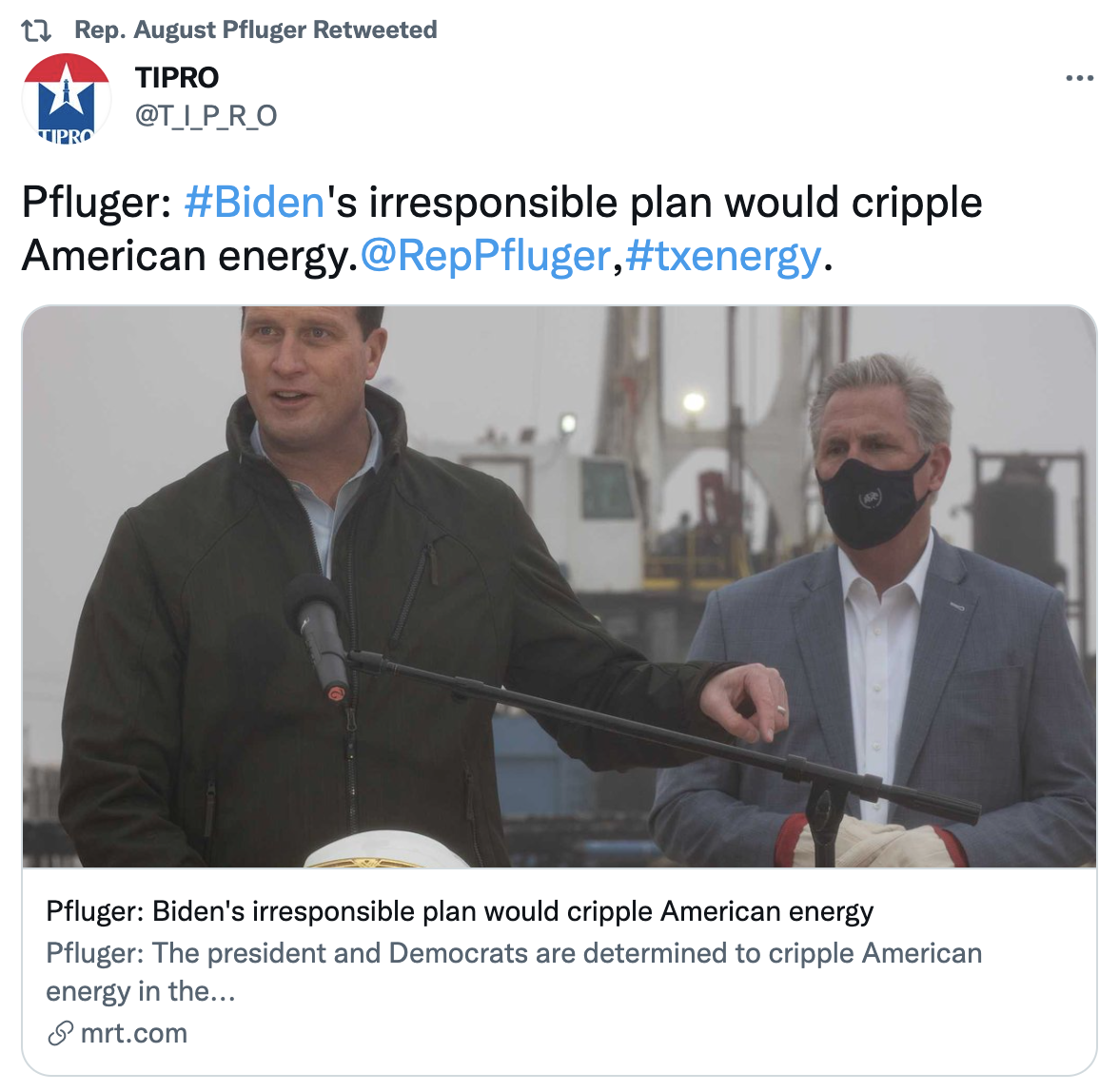 Republican Whip Steve Scalise (R-La.) slammed President Biden and Congressional Democrats for attempting to ram through their $5.5 trillion socialist wish list that will cause utility costs to skyrocket for hard-working families. 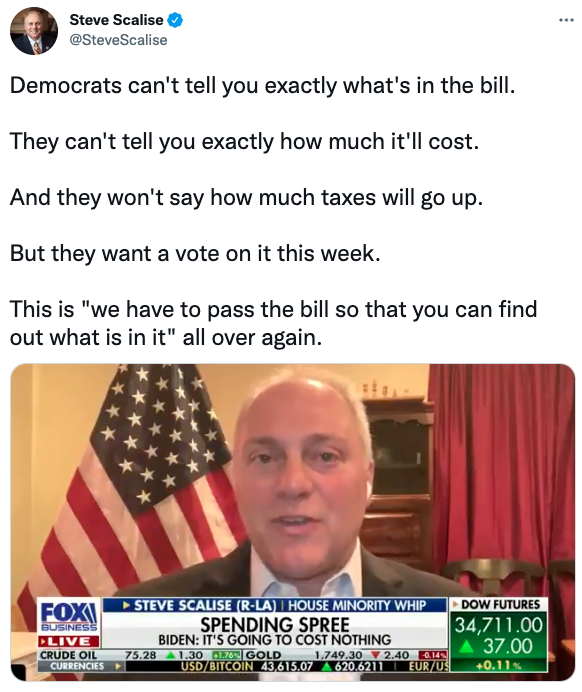 Representative Kelly Armstrong (R-N.D.) celebrated the completion of the Line 3 pipeline. After months of attempts by radical environmentalists to stop it, the Line 3 pipeline began safely transporting oil on October 1. Pipelines are by far the safest way to transport America’s oil and natural gas resources to provide reliable energy across the country. 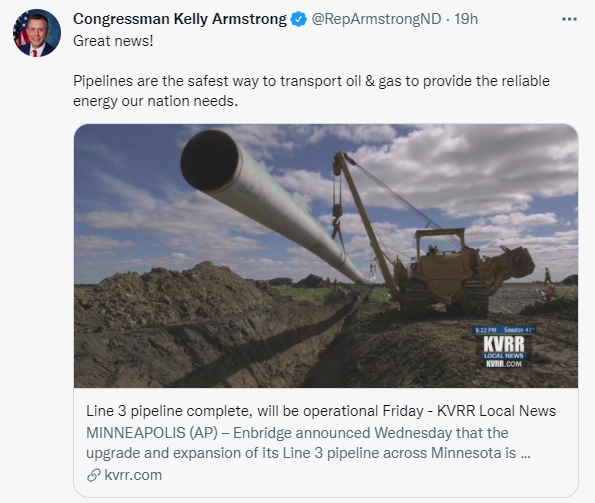 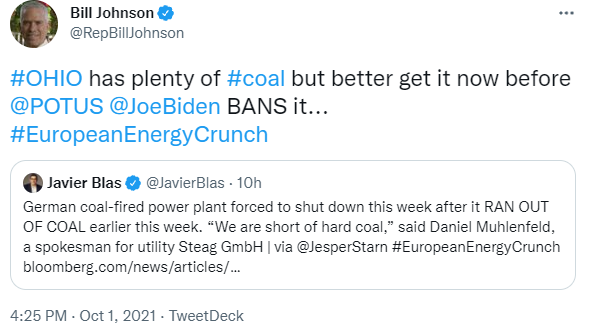 Representative August Pfluger (R-Texas) posted an excerpt from his speech on the House Floor about anti-energy policies in Congressional Democrats’ radical reconciliation bill. 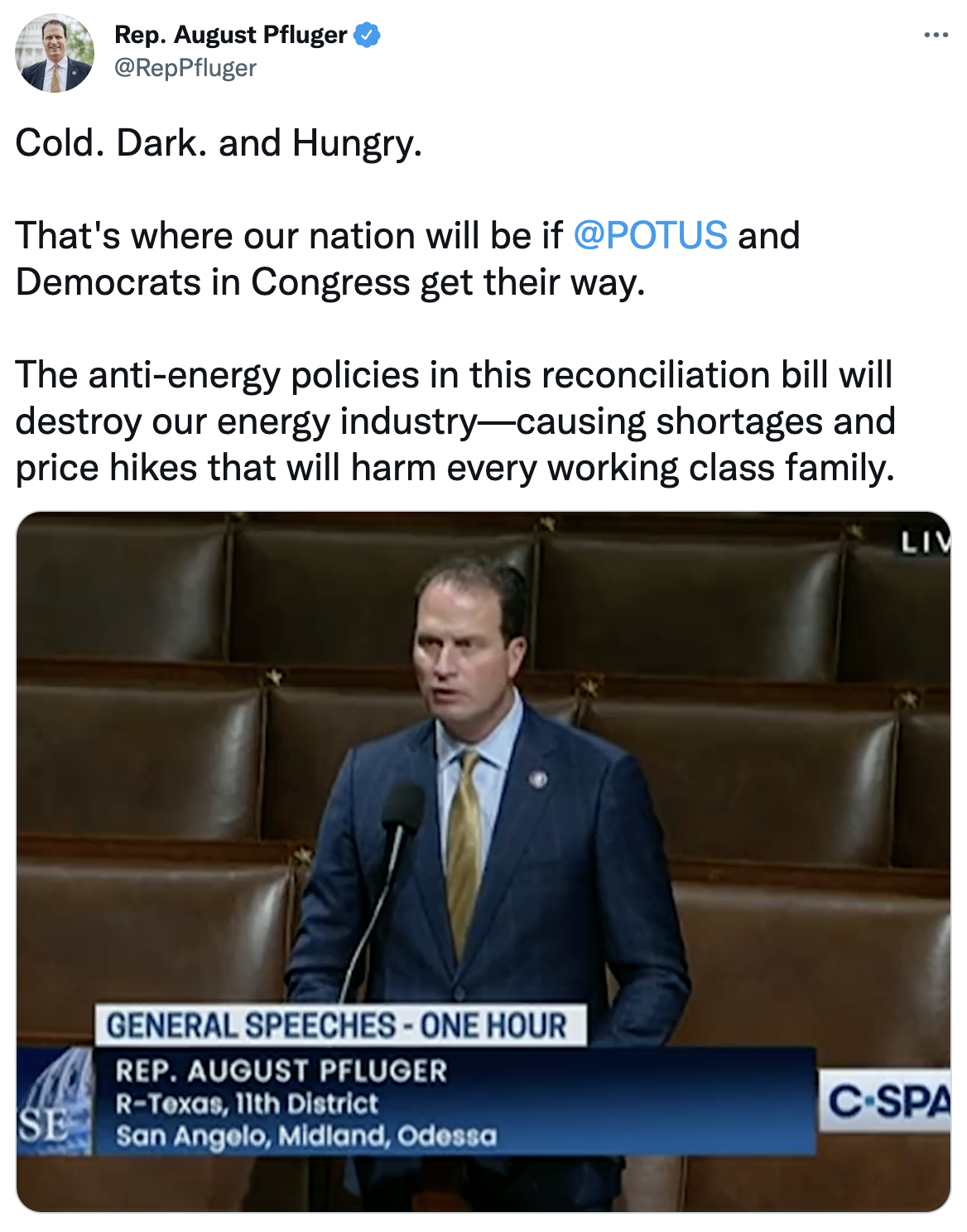 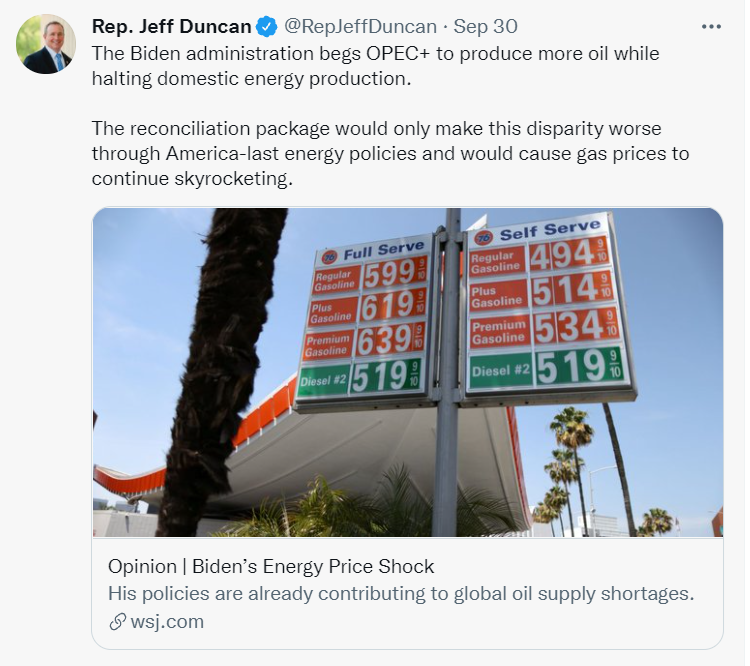 Representative Greg Pence (R-Ind.) brought up the ramifications of President Biden’s “climate pledge” and what it would mean for hard-working American families to enact his radical, socialist agenda. 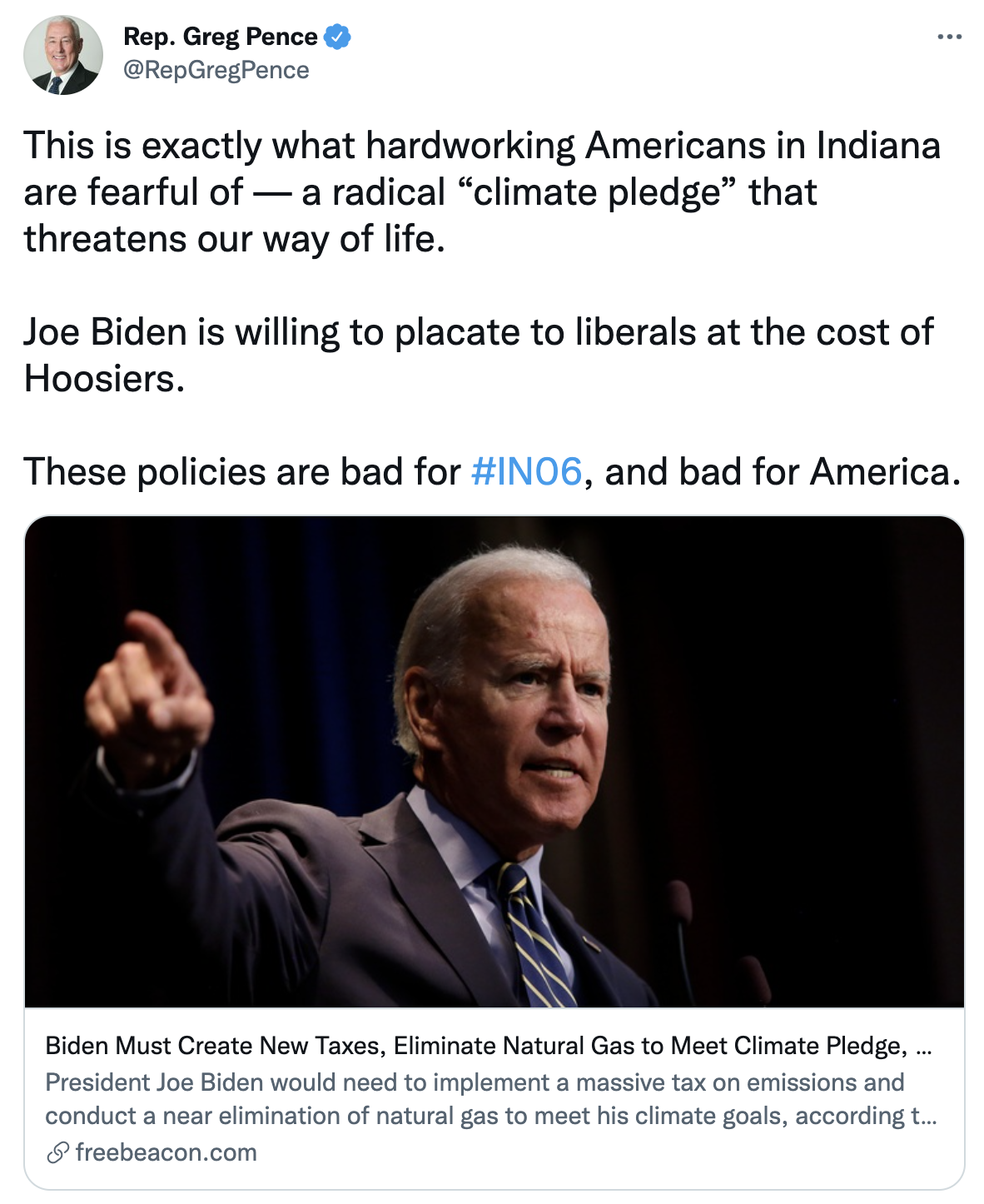 In an Energy and Commerce Subcommittee on Oversight and Investigations hearing,Energy and Commerce Subcommittee on Environment and Climate Change Ranking Member David McKinley, P.E. (R-W. Va.) questioned U.S. Chemical Safety and Hazard Investigation Board Chairwoman Katherine Lemos regarding any further attempts by the Chemical Safety Board to act outside the scope of its mission.