Last week, House Democrats advanced H.R. 803, their Partisan Wilderness Package. This package of eight divisive wilderness bills amounts to a federal land grab that ignores input from important local stakeholders and is opposed by several Members of Congress whose districts are primarily impacted by the legislation. By arbitrarily locking up land under onerous restrictions, the package will destroy jobs, increase the threat of catastrophic wildfires across the West, surrender our energy and mineral needs to countries hostile to United States’ interests, and restrict public access and recreation opportunities. Democrats’ reckless land grab legislation:

HEAT co-chair Rep. Jeff Duncan (R-SC) participated in the House Energy and Commerce Committee hearing on “Pathways to a Clean Energy Future” and highlighted the importance of pursuing an all-of-the-above energy approach. He spoke to how nuclear power is a critical part of the solution as it provides a carbon-free 24/7 baseload power supply, and the industry alone creates hundreds of thousands of good-paying jobs and is a solid source of local revenue for many states. 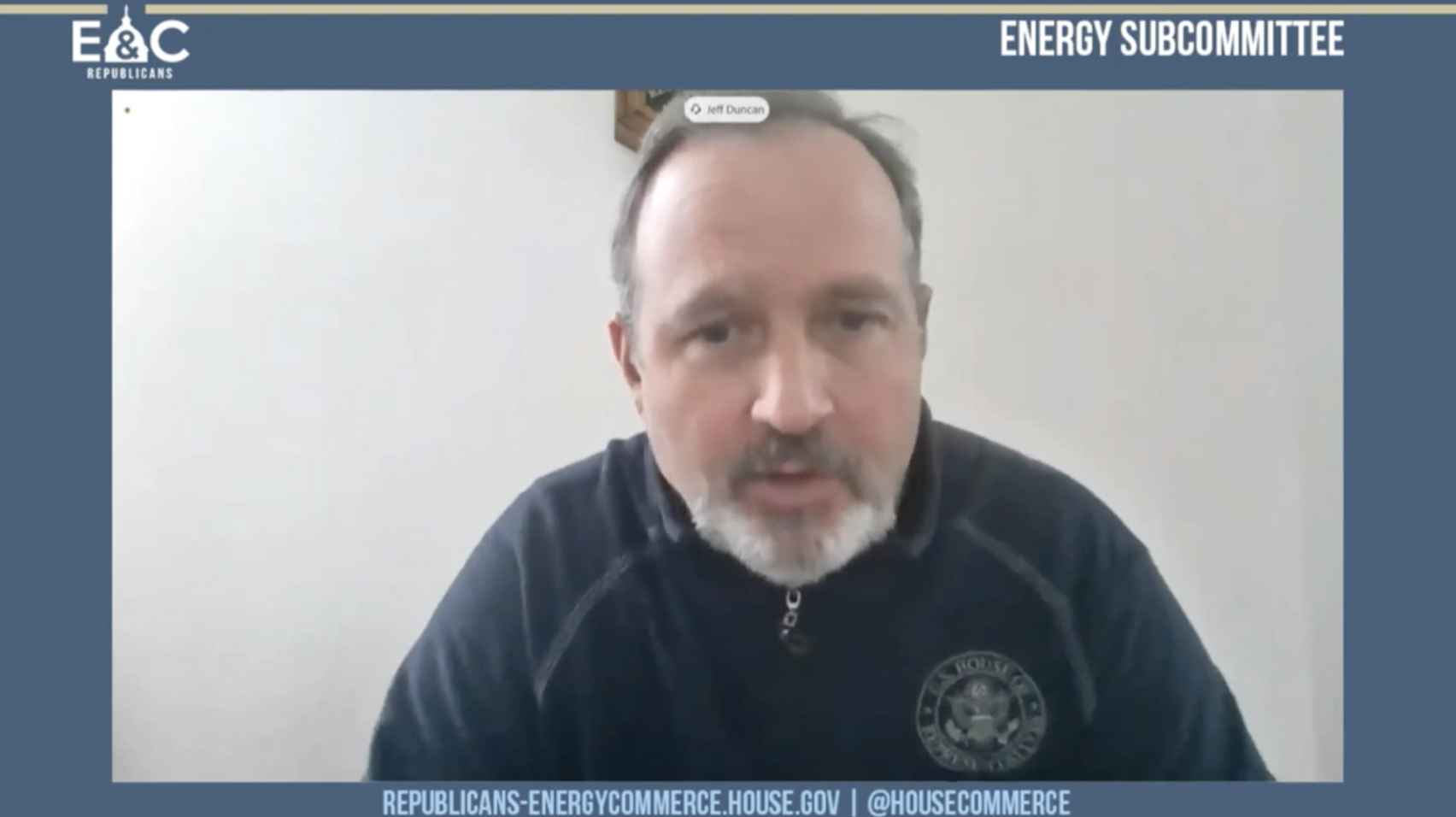 Representative Bob Latta (R-Ohio) re-introduced the Nuclear Prosperity and Security Act. This legislation would direct the Secretary of Energy to establish and operate a uranium reserve in the United States, which would ensure the availability of uranium in the event of a market disruption and support strategic fuel cycle capabilities for our country. 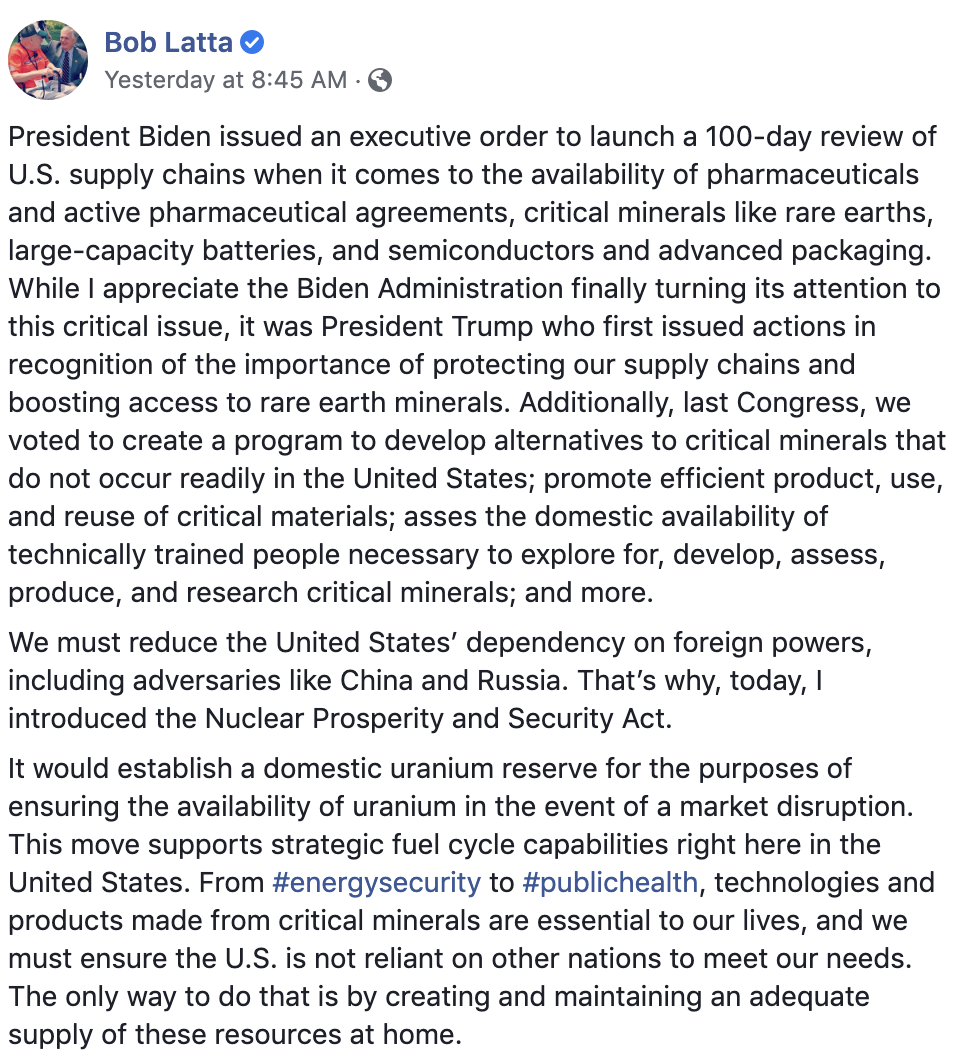 Western Caucus Chairman Dan Newhouse (R-Wash.) spoke on the House Floor to urge a no vote on H.R. 803. 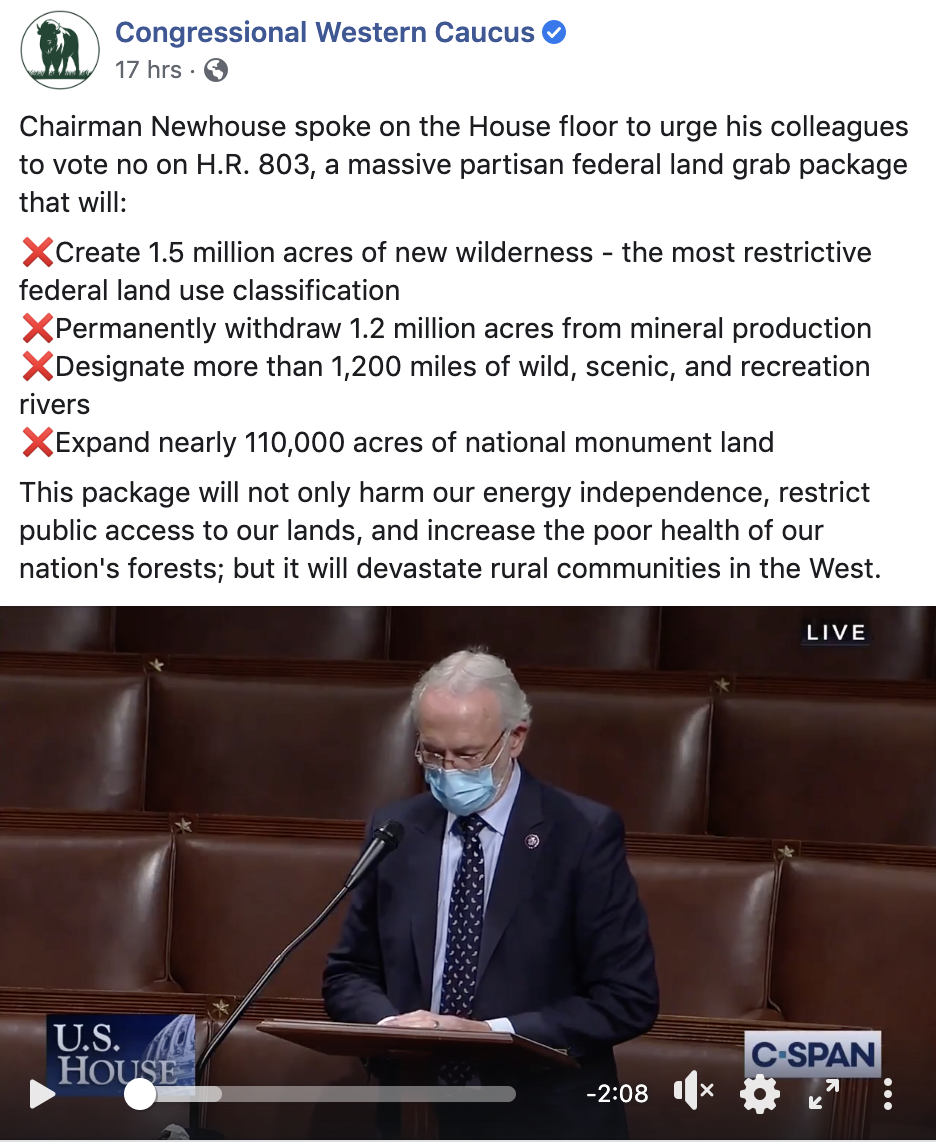 Representative Pete Stauber (R-Mo.) hosted a Fight for Our Way of Life Mining Rally to emphasize the importance of mining to hardworking Minnesota families. 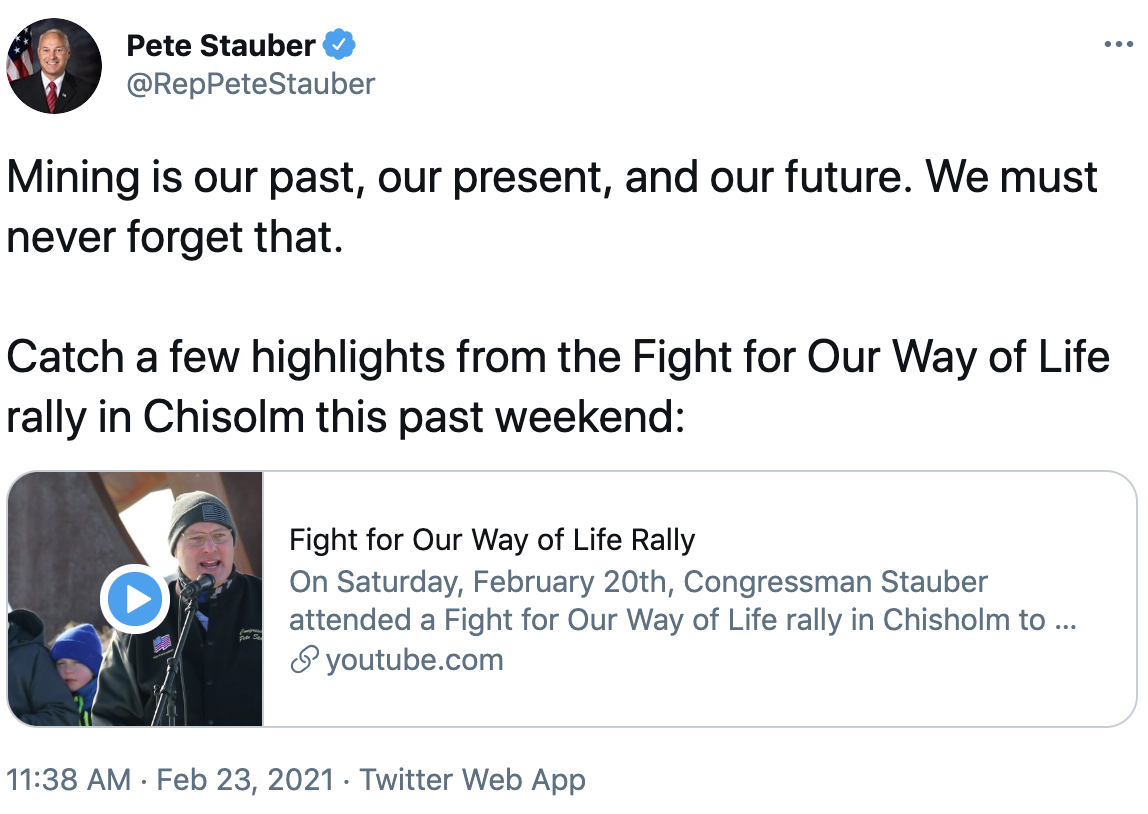 Representative Paul Gosar, DDS (R-Ariz.) blasted Democrats for the negative impacts their land grab legislation will have in his district. 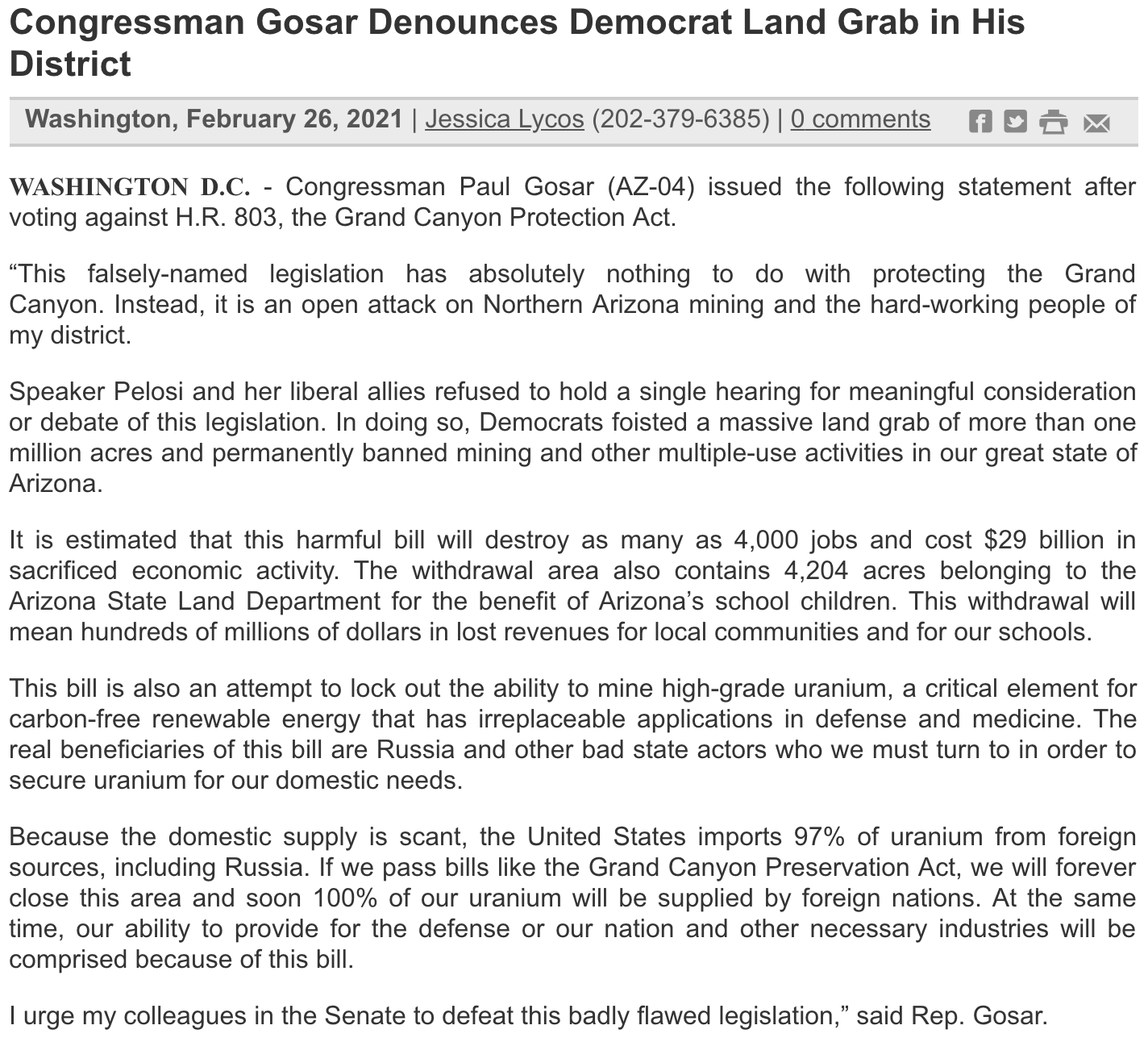 “We can all agree that Congress needs to do what it can to conserve, protect, and maintain America’s public lands and environment for future generations to come. However, what House Democrats have proposed in their lopsided Wilderness Package is not that. Let us be frank about what this is: A combination of eight partisan lands bills that did not go through regular order and was made without the consultation of those who members have jurisdiction over these lands. Last Congress, I was proud to support The Great American Outdoors Act, a bipartisan conservation bill that President Trump signed into law. Both sides of the aisle came together and showed the American people what can be accomplished through bipartisan collaboration on common sense legislation. Here, Democrats are showing that working across the aisle to achieve measured legislation is too much to ask for, even with a slim majority in both chambers.” 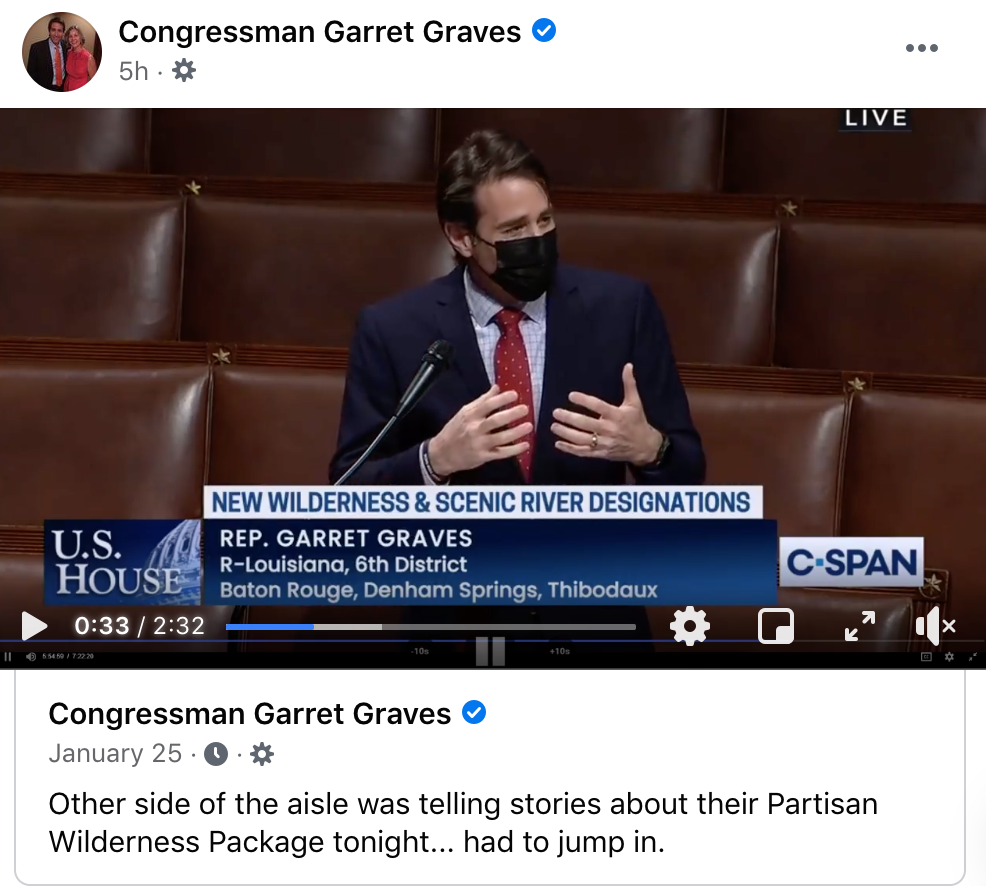 President Biden’s Interior Secretary nominee, Rep. Deb Haaland, admitted that she’s unaware of any evidence that banning oil and gas leasing on federal lands and waters would reduce the world’s total production or consumption of oil and gas.

?HEAT co-chair Rep. Jeff Duncan (R-SC) introduces legislation to codify restrictions on foreign adversaries including China, Russia, North Korea, and others accessing or owning parts of the United States power grid. President Biden has unfortunately proven his inability to stand firm against our adversaries, and Congress must do everything in our power to ensure the security and reliability of our nation’s power grid are always upheld. 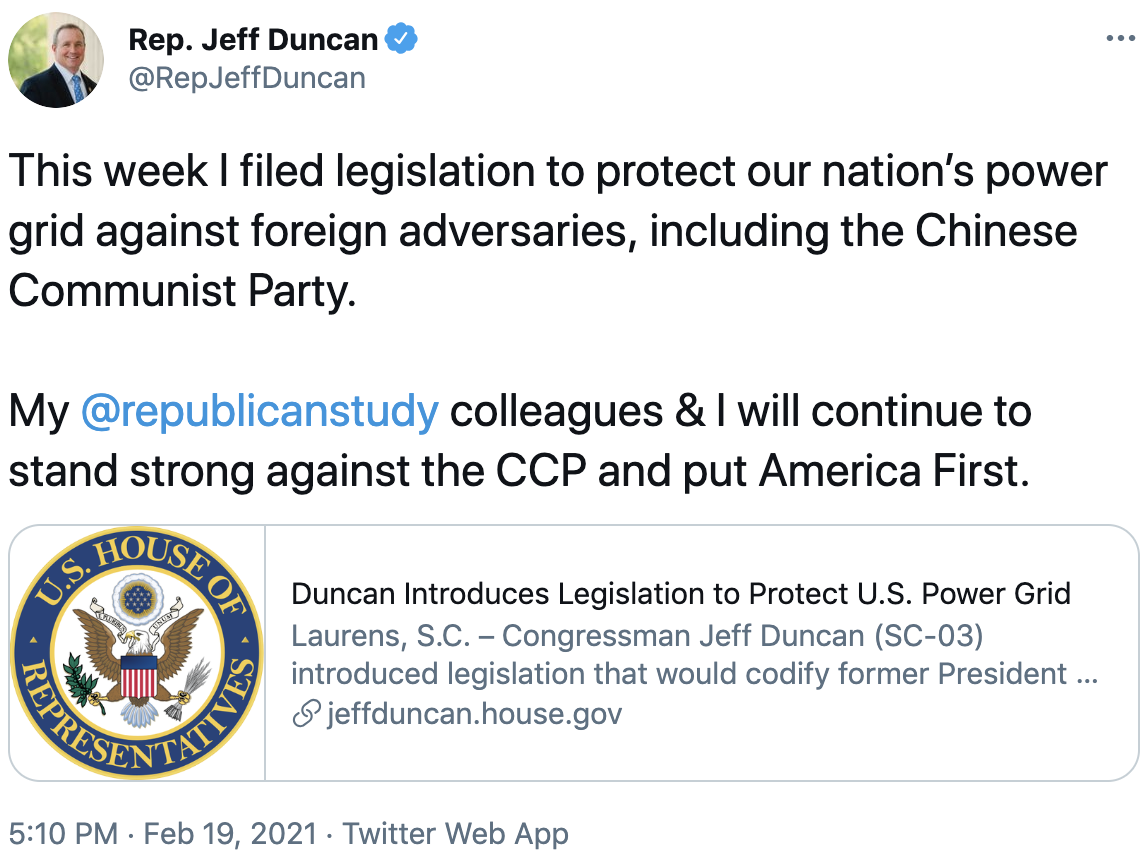 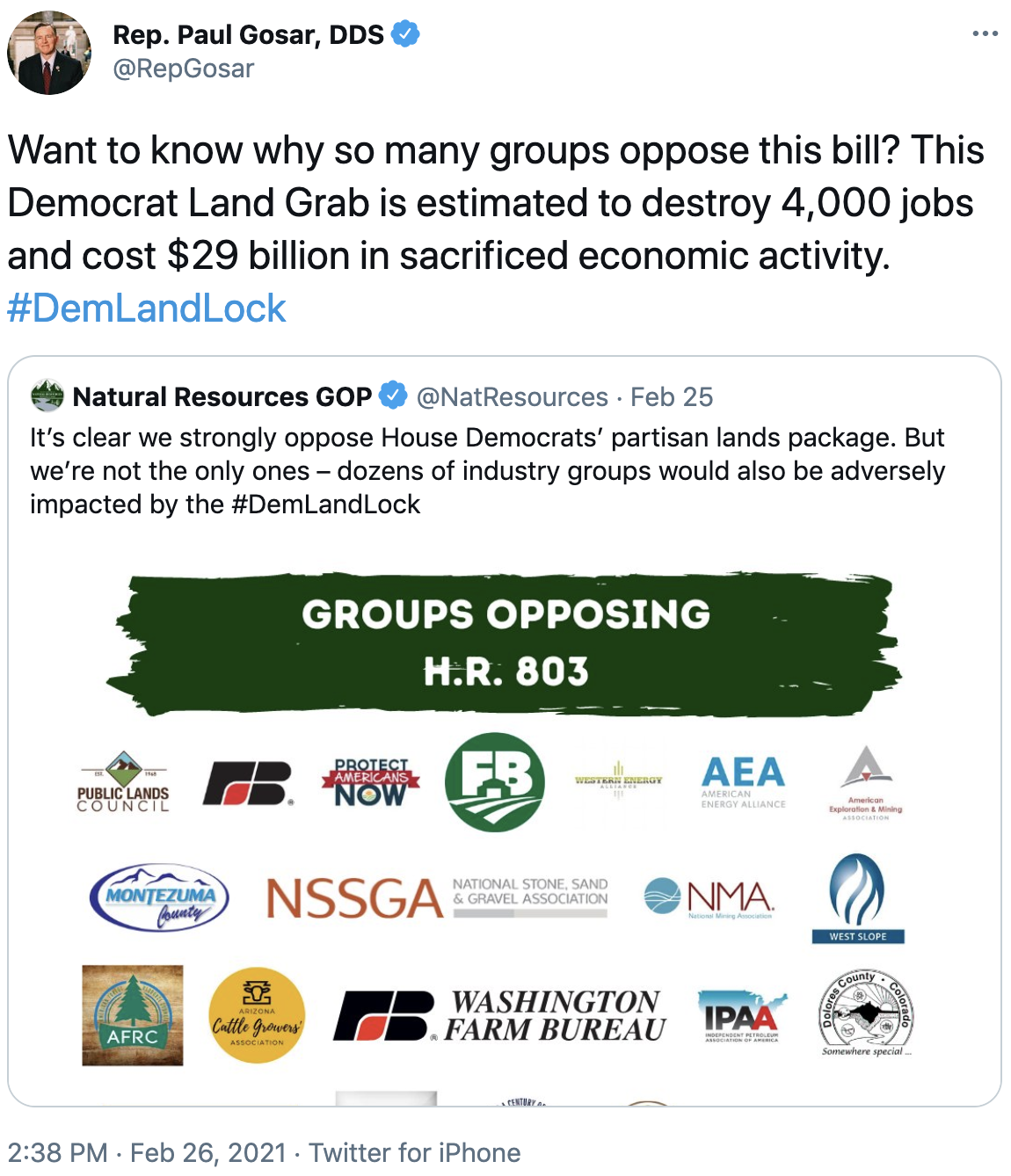