The HEAT Report is a weekly newsletter focusing on how members of the House Energy Action Team (HEAT) promote American energy security, and an all-of-the-above energy economy.
The Latest:Week in and week out, President Biden refuses to accept responsibility for his anti-American energy policies that are crushing American jobs and raising costs on families. He blames everyone but himself for his self-created energy crisis which is forcing families to choose between filling their tanks or feeding their families.President Biden just came back from Saudi Arabia hat-in-hand after begging them to produce more oil. He flew over 5,700 on Air Force One just to be told no, they won’t produce more energy, instead of turning to America’s energy producers, where the answer would have been yes. No other country produces energy cleaner and more efficiently than right here in America.To make matters worse, Democrats refuse to bring any bills to the House Floor that would bring down gas prices, lower inflation, and address the serious problems that families are facing. Republicans brought forward a package of energy bills that would lower gas prices tomorrow, but not a single one of those bills has come to the Floor. That just shows how out of touch Congressional Democrats are with American families.President Biden and Speaker Pelosi must work with Republicans to bring forward legislation to lift America out of the worst energy crisis in decades and ease the economic burden impacting low and middle-income families.This Week’s HEAT Member Highlights:At House Republican Leadership’s weekly press conference, House Republican Whip Steve Scalise (R-La.) blasted House Democrats for deciding not to bring Republican proposals to the House Floor that would address President Biden’s self-created energy crisis. 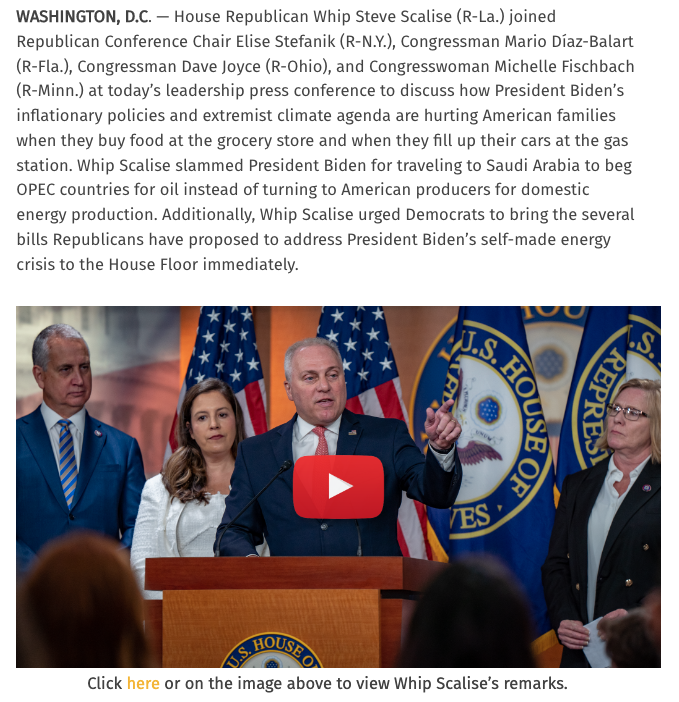 HEAT Co-Chair Rep. Jeff Duncan (R-S.C.) led an “All of the Above Energy” tour of South Carolina’s Third District to show Members of Congress nationwide how South Carolina is leading the way in nuclear energy and the importance of an all-of-the-above energy strategy. The group visited Clemson University to learn more about the university’s capabilities in energy innovation, research, education and creating the next generation of energy workforce, as well as Duke Energy’s Bad Creek Hydro Station and Duke’s Oconee Nuclear Station, one of the United States’ premier nuclear facilities. 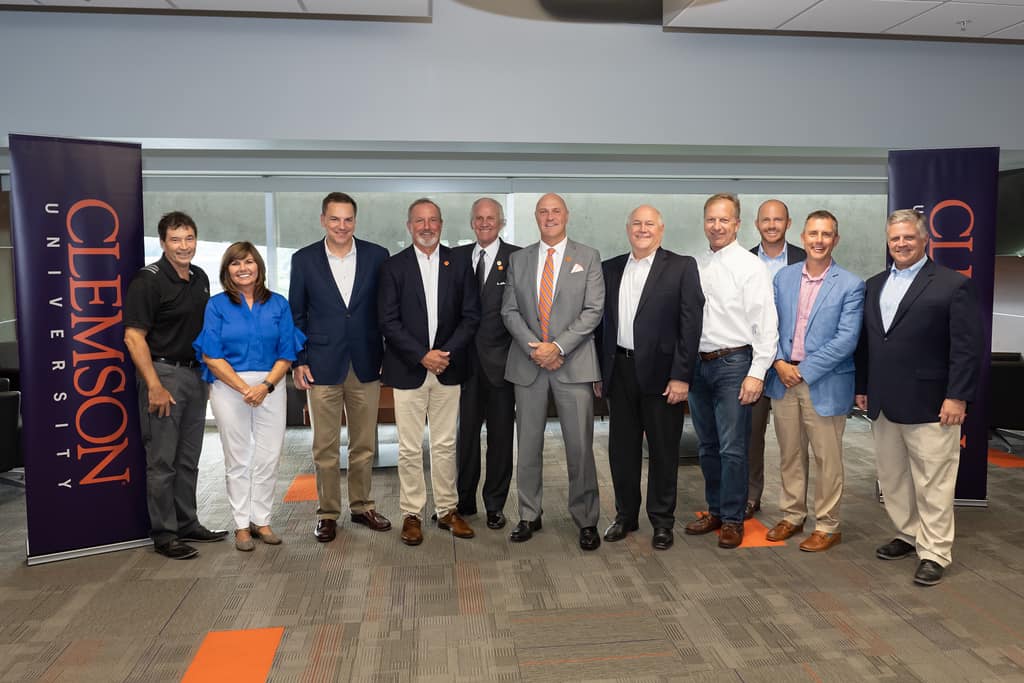 HEAT Co-Chair Rep. Markwayne Mullin (R-Okla.) sent a letter to Energy and Commerce Committee Chairman Frank Pallone (D-N.J.) requesting a hearing on the Biden Administration’s mismanagement of the Strategic Petroleum Reserve and urged Chairman Pallone to address recent reports that millions of barrels of crude oil are being exported to China. 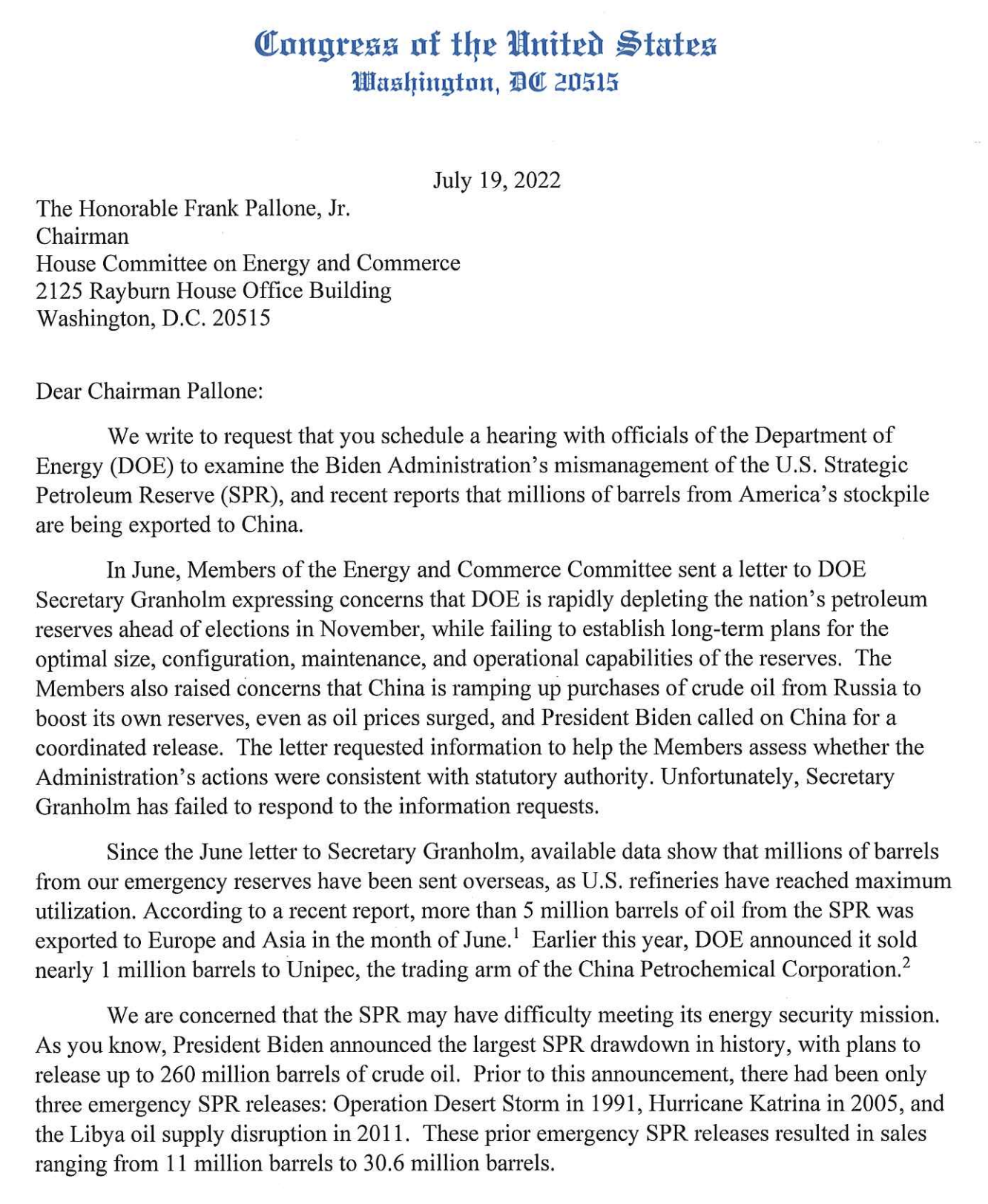 Representative Mariannette Miller-Meeks (R-Iowa) introduced an amendment to the House appropriations package prohibiting oil from the Strategic Petroleum Reserve from being sold to China. 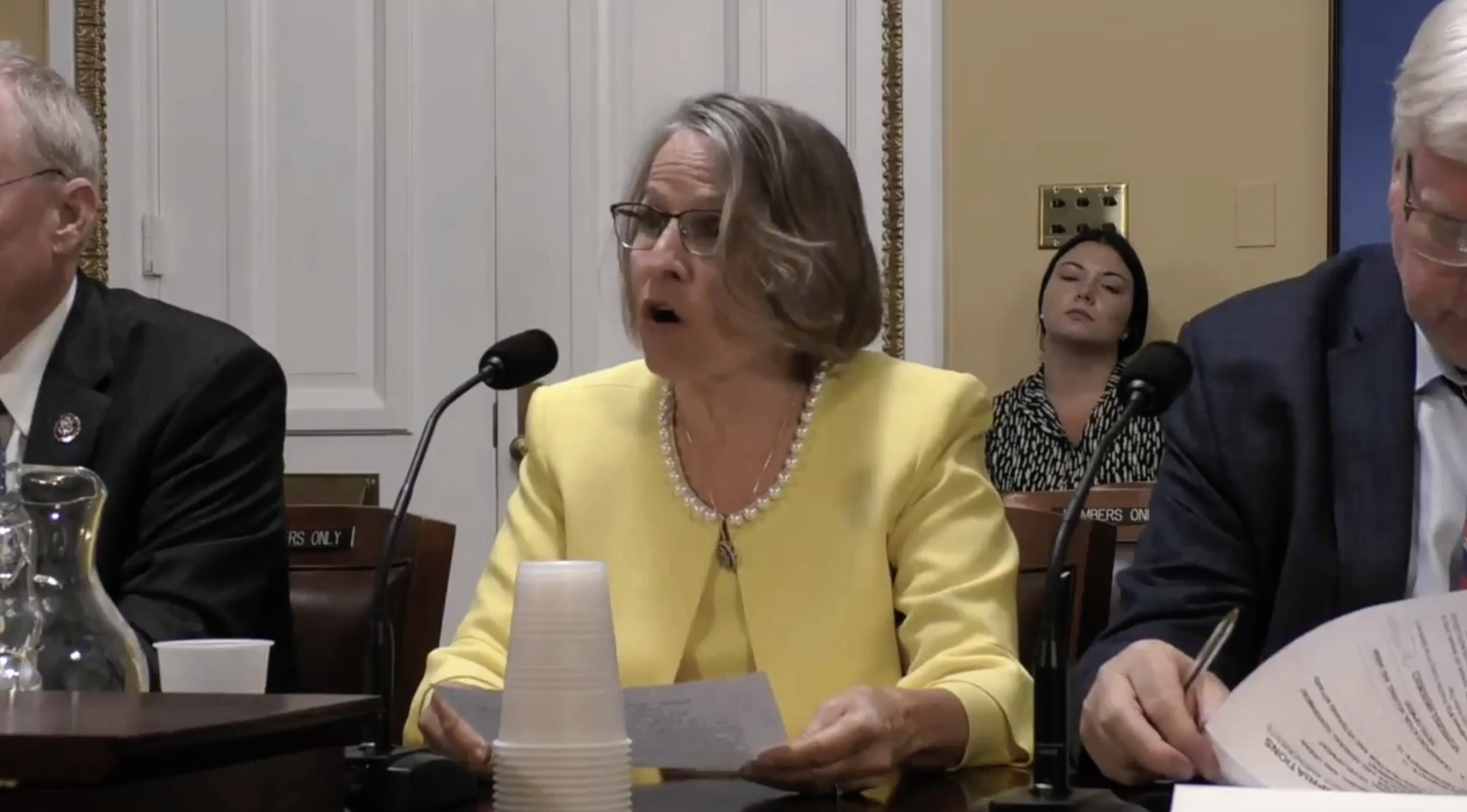 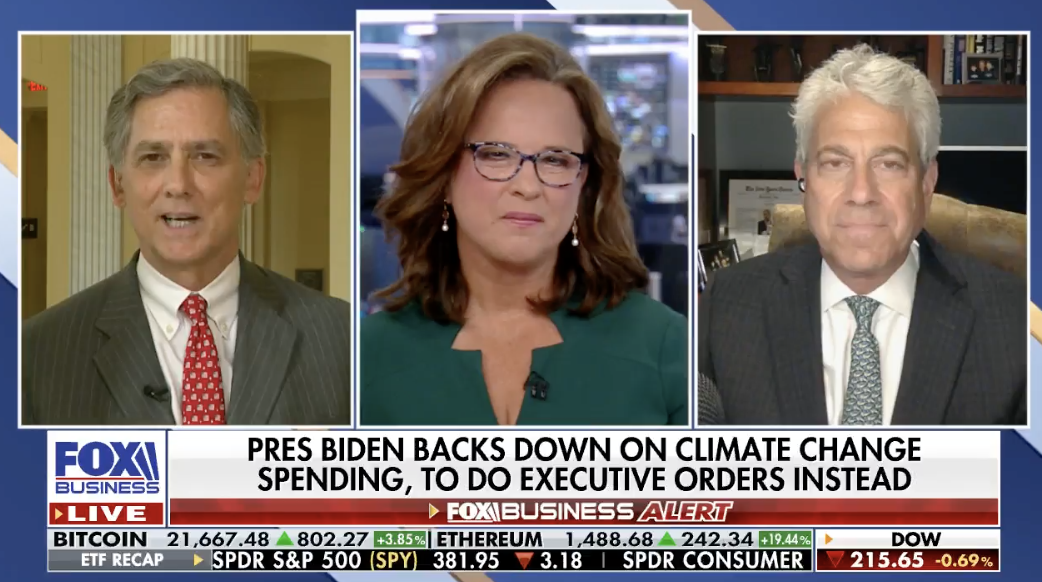 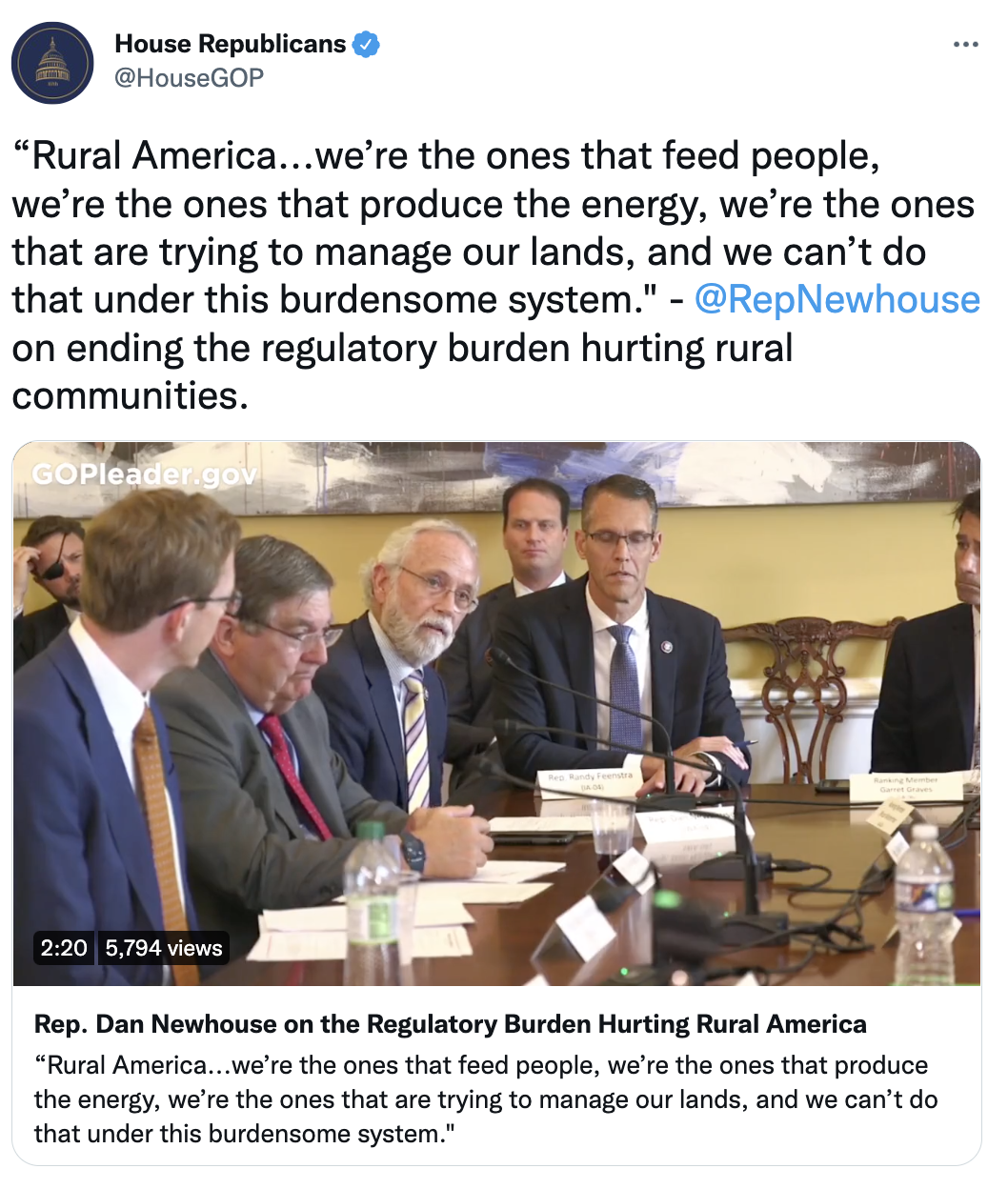 At a Natural Resources Subcommittee on Energy and Mineral Resources hearing, Representative Russ Fulcher (R-Idaho) discussed his Enhancing Geothermal Production on Federal Lands Act to create a limited categorical exclusion for geothermal exploration activities on federal lands so that companies can mitigate the risk of investing the high up-front capital costs that geothermal development requires. 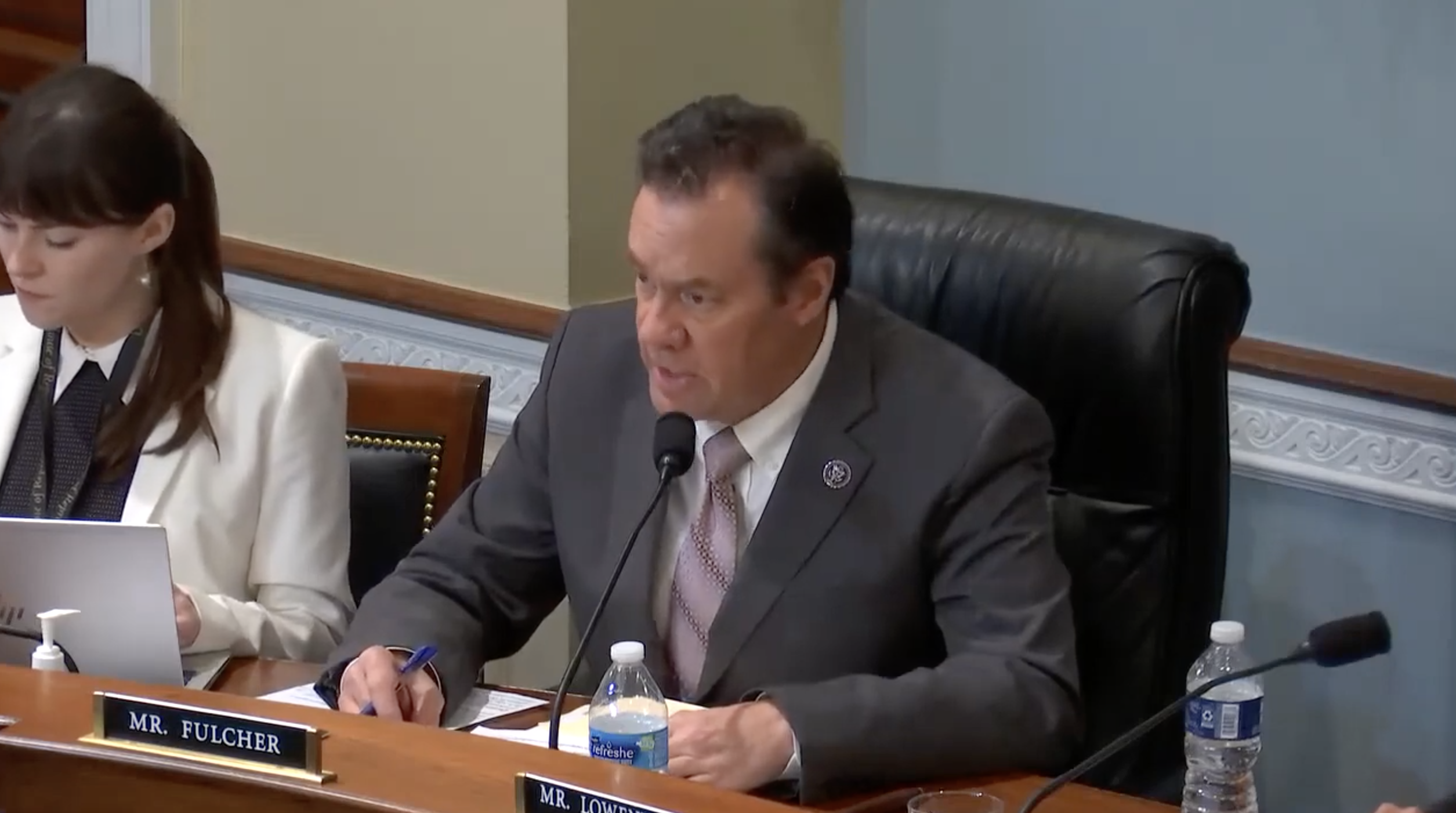 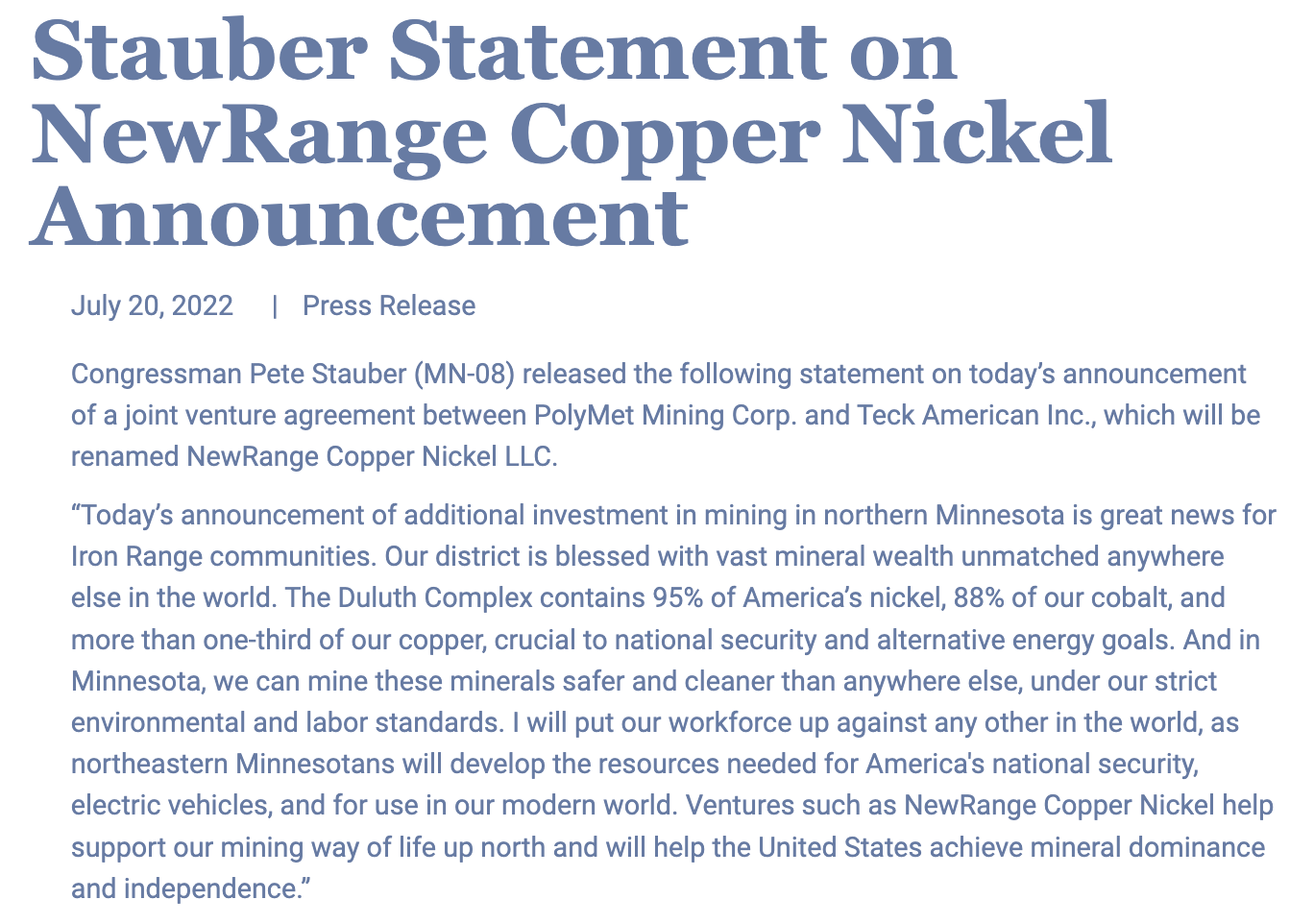 Representative Greg Pence (R-Ind.) visited an AmeriGas location in his district to witness their operations serving propane to Hoosiers on a daily basis. 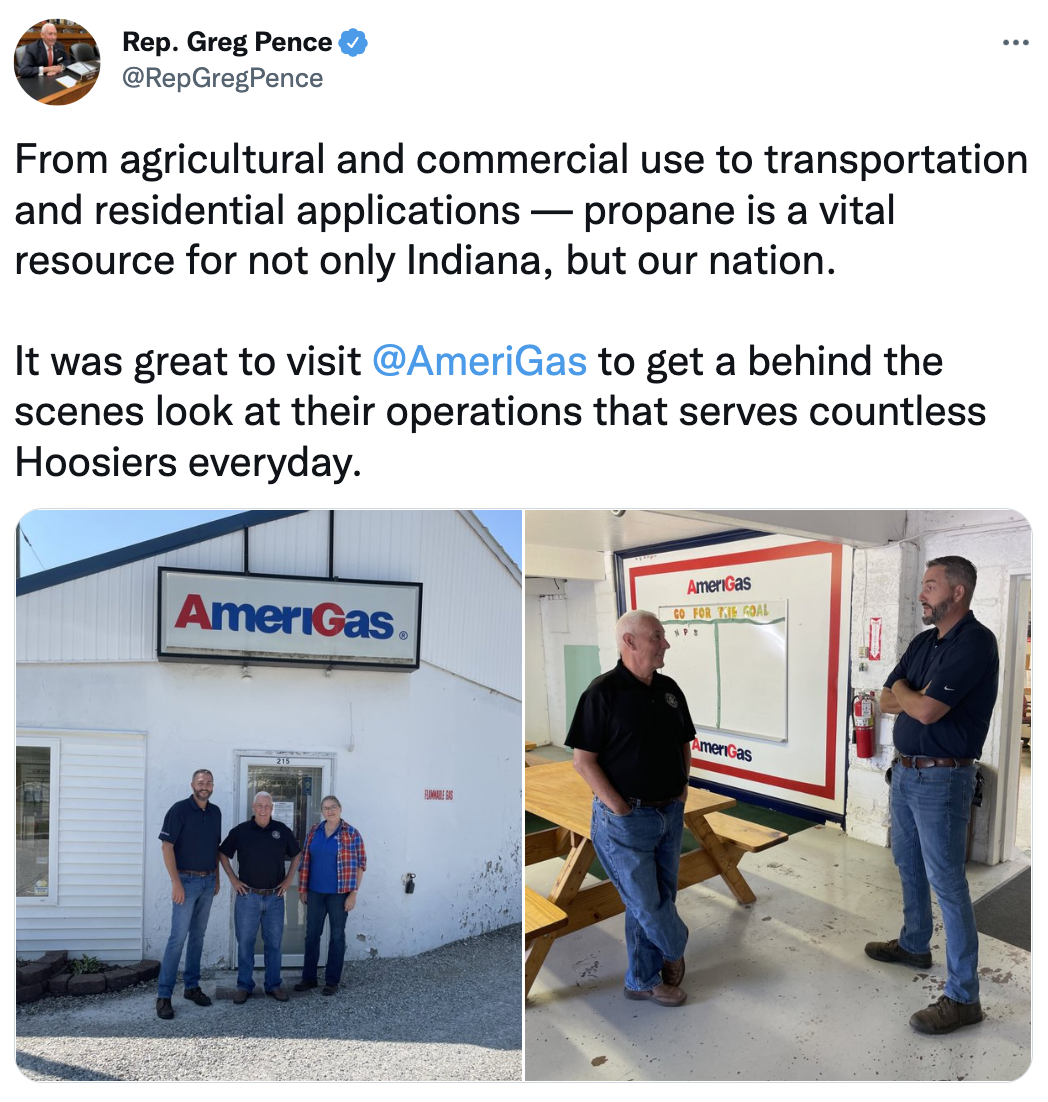 Representative Fred Keller (R-Pa.) hosted a telephone town hall where energy was a top concern for constituents. During his remarks, Rep. Keller called out the Biden Administration’s assault on American energy, saying that President Biden should meet with domestic producers instead of begging Saudi Arabia and other foreign nations for oil. 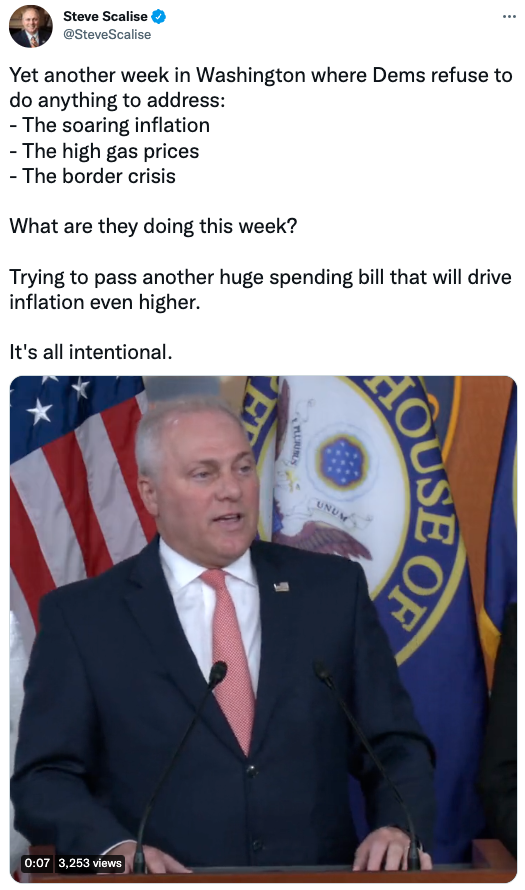 HEAT Co-Chair Rep. Jeff Duncan (R-S.C.) showcased his “All of the Above Energy” tour that he hosted in South Carolina’s Third District. 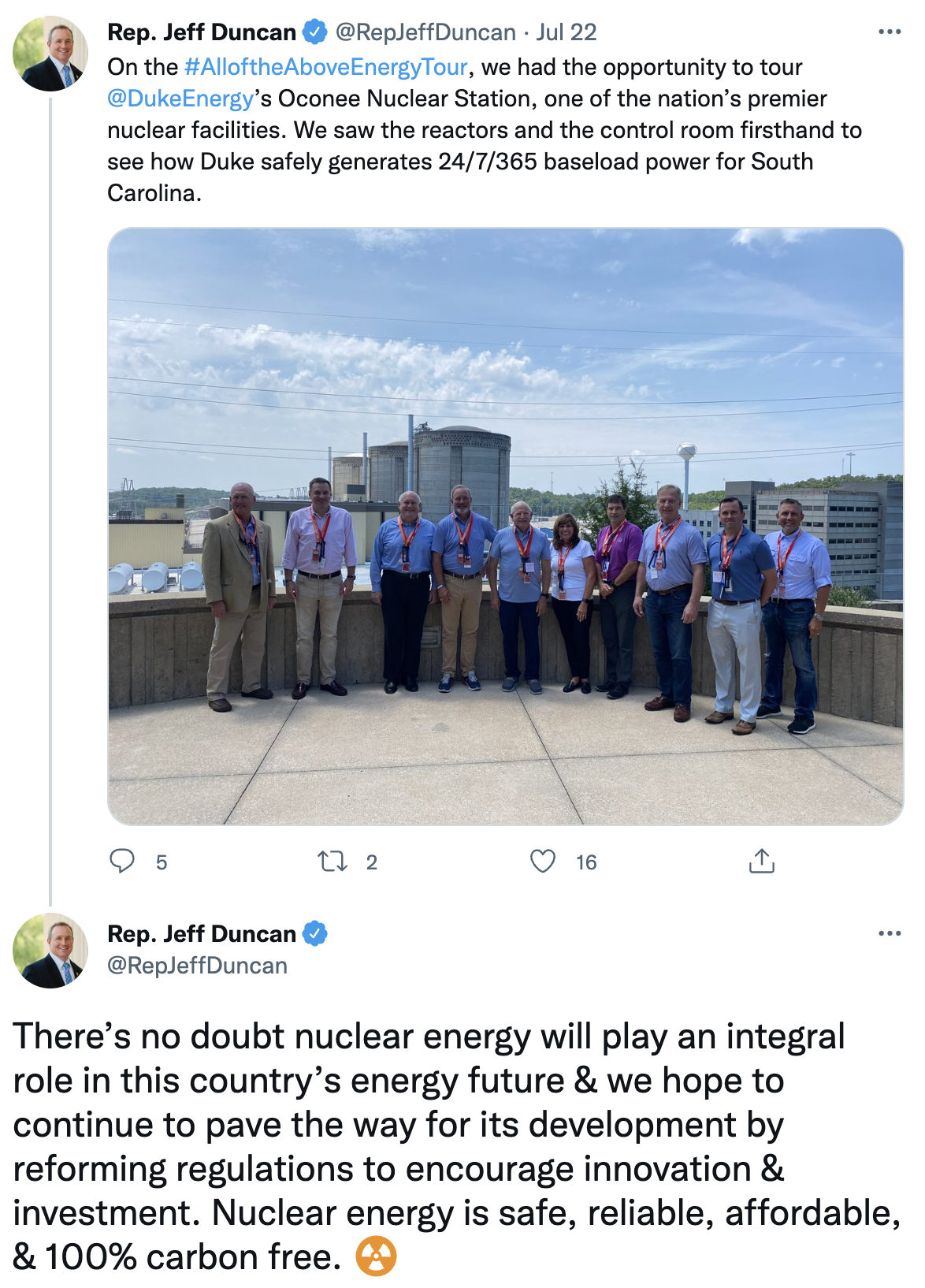 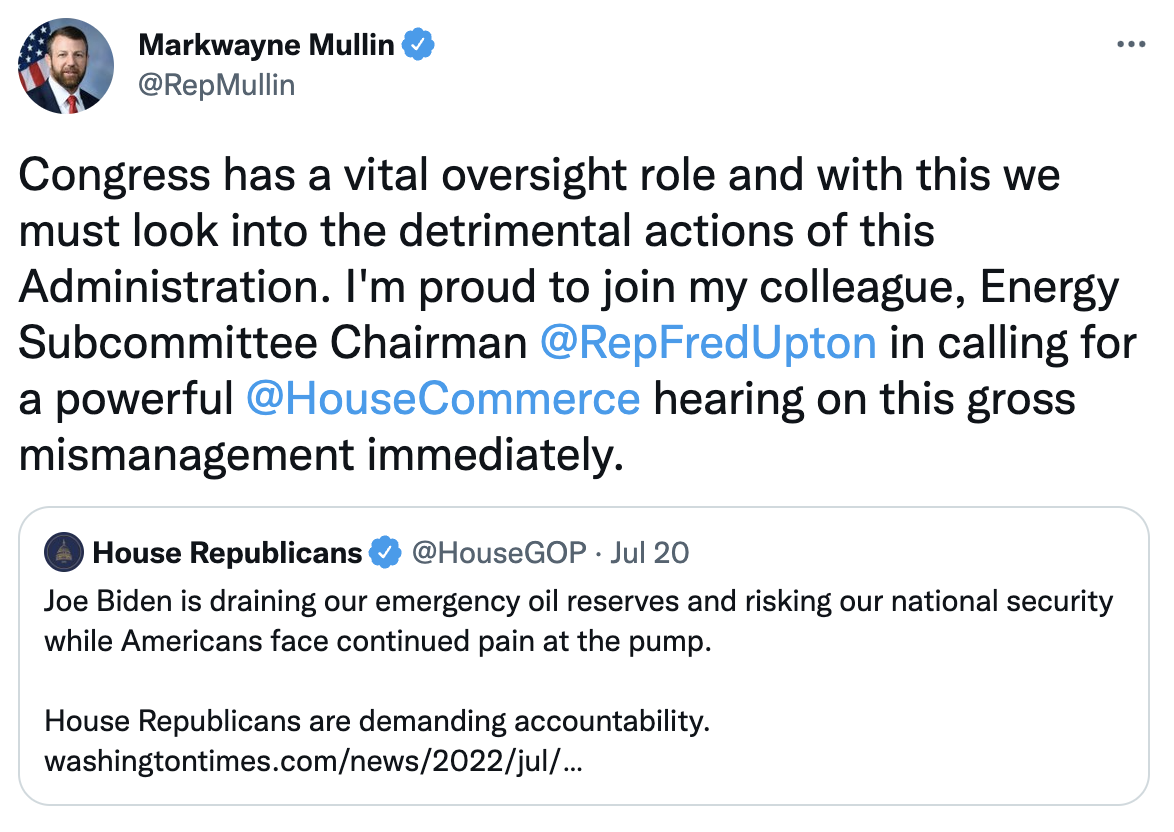 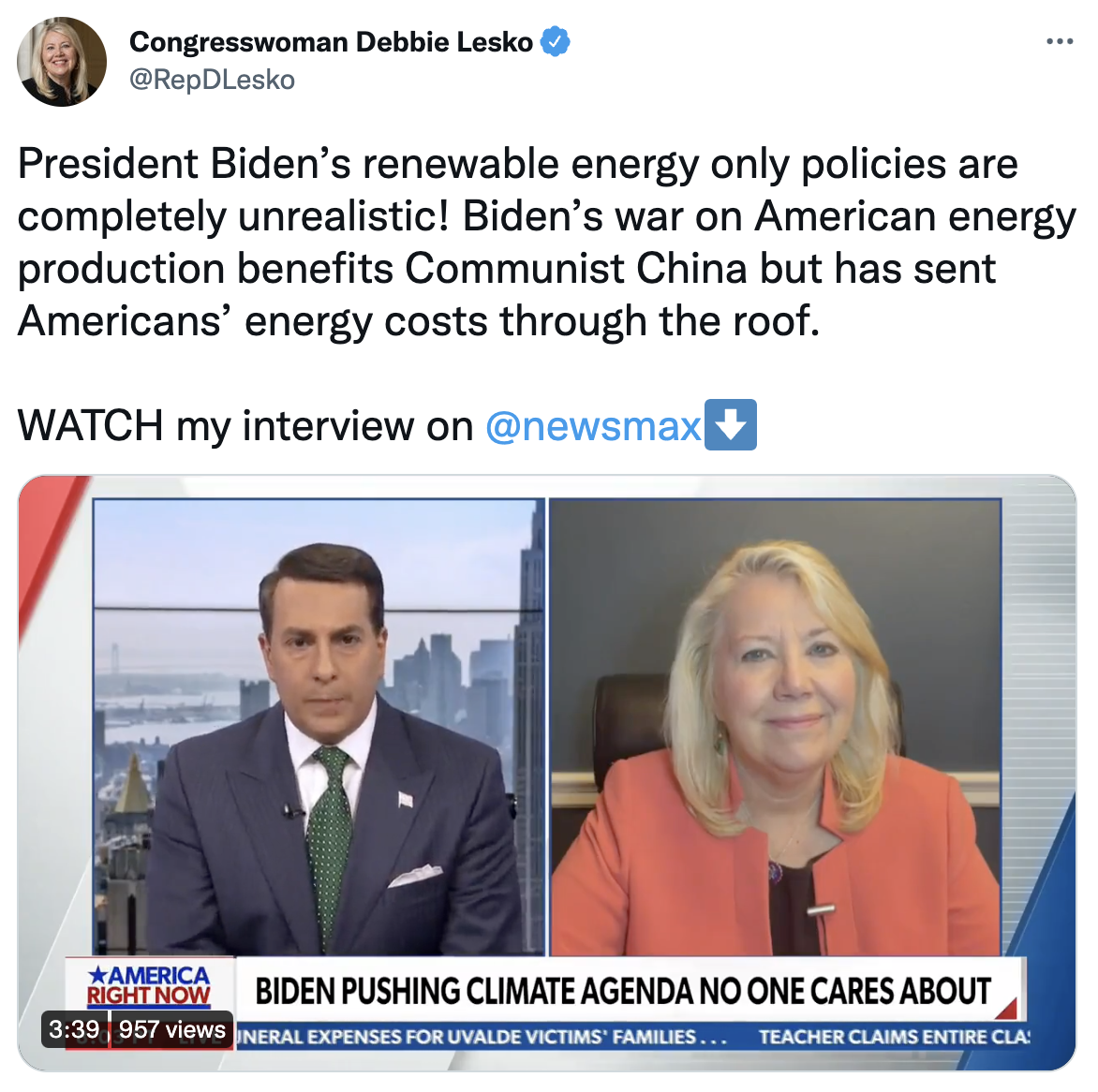 Representative Bill Johnson (R-Ohio) called out the Biden Administration for taking credit for slight decreases in average gas prices when those prices are still drastically high and are straining the wallets of hardworking Americans. 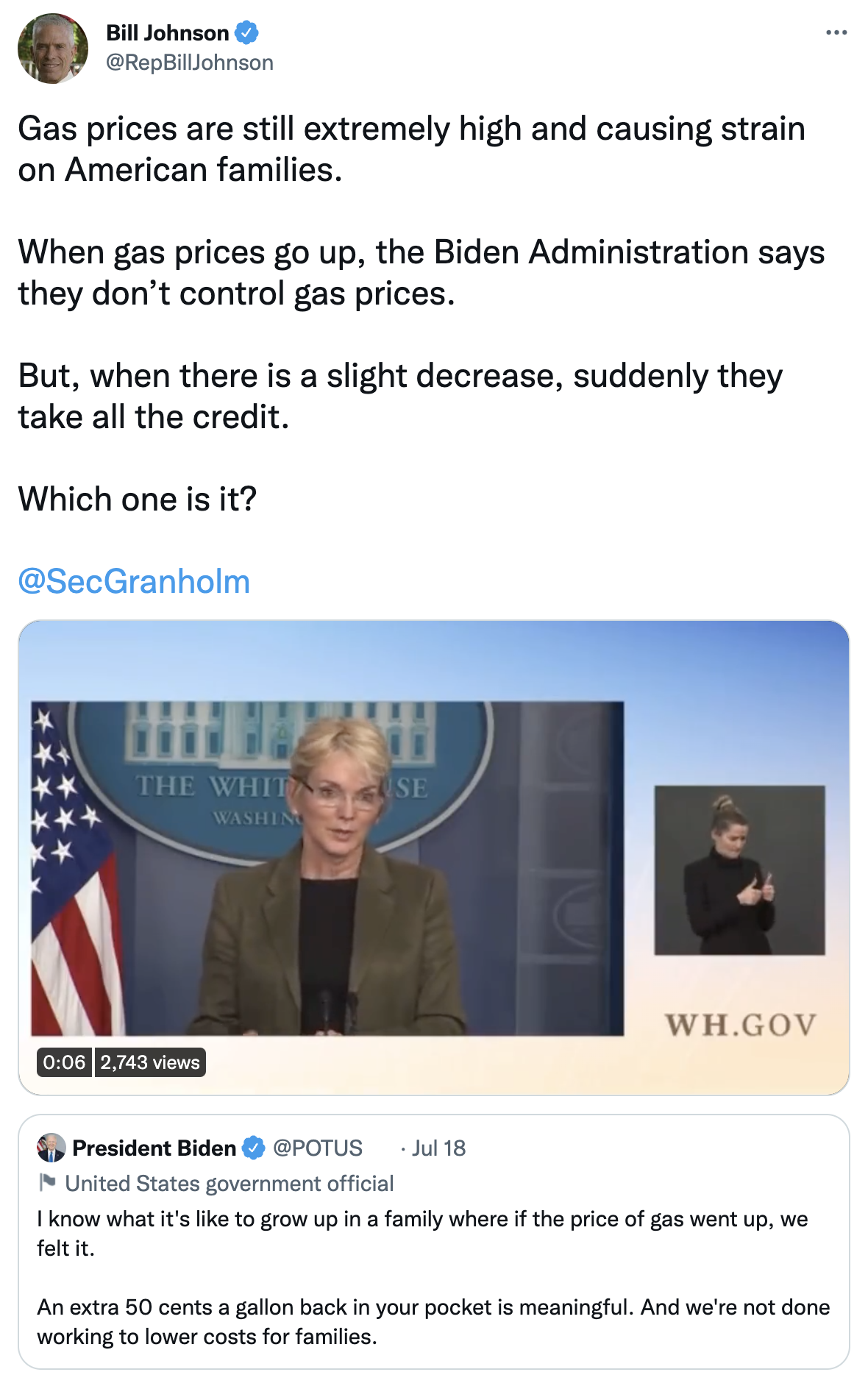 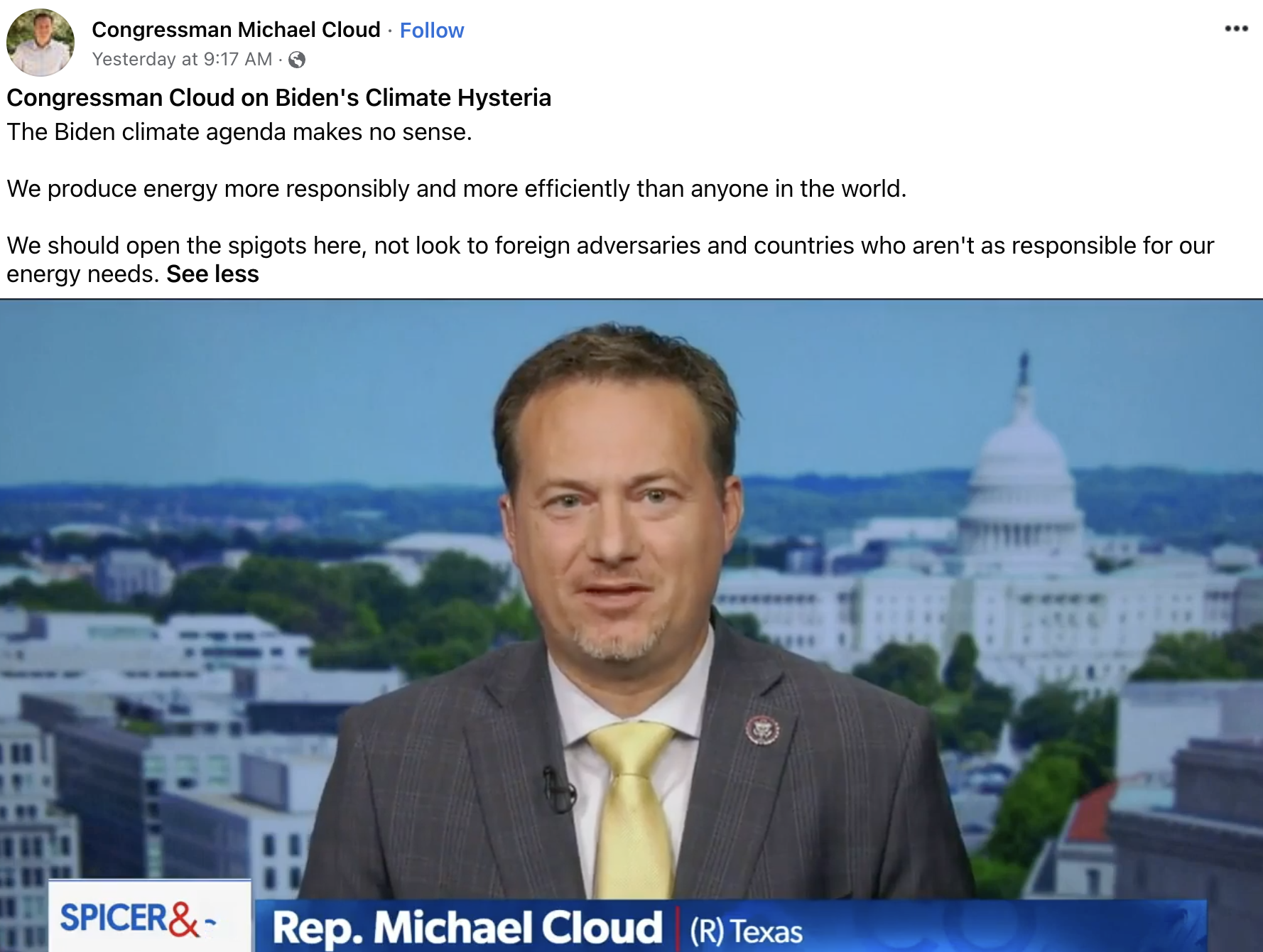