In another day of “blockbuster” testimony for Democrats, Americans who tuned in for the Judiciary Committee’s first impeachment hearing got a marathon lecture on 17th century English common law.

Democrats called a panel of liberal law professors to justify their abuse of President Trump throughout this impeachment process.

Yet, even these liberal law professors couldn’t unanimously agree that President Trump should be impeached. George Washington University Law Professor Jonathan Turley — a self-professed Clinton, Obama voter — stated, in no uncertain terms, that this impeachment process has been unfair, misguided, and sets a dangerous precedent for the future:

“This would be the first impeachment in history where there would be considerable debate, and in my view, not compelling evidence of the commission of a crime.” 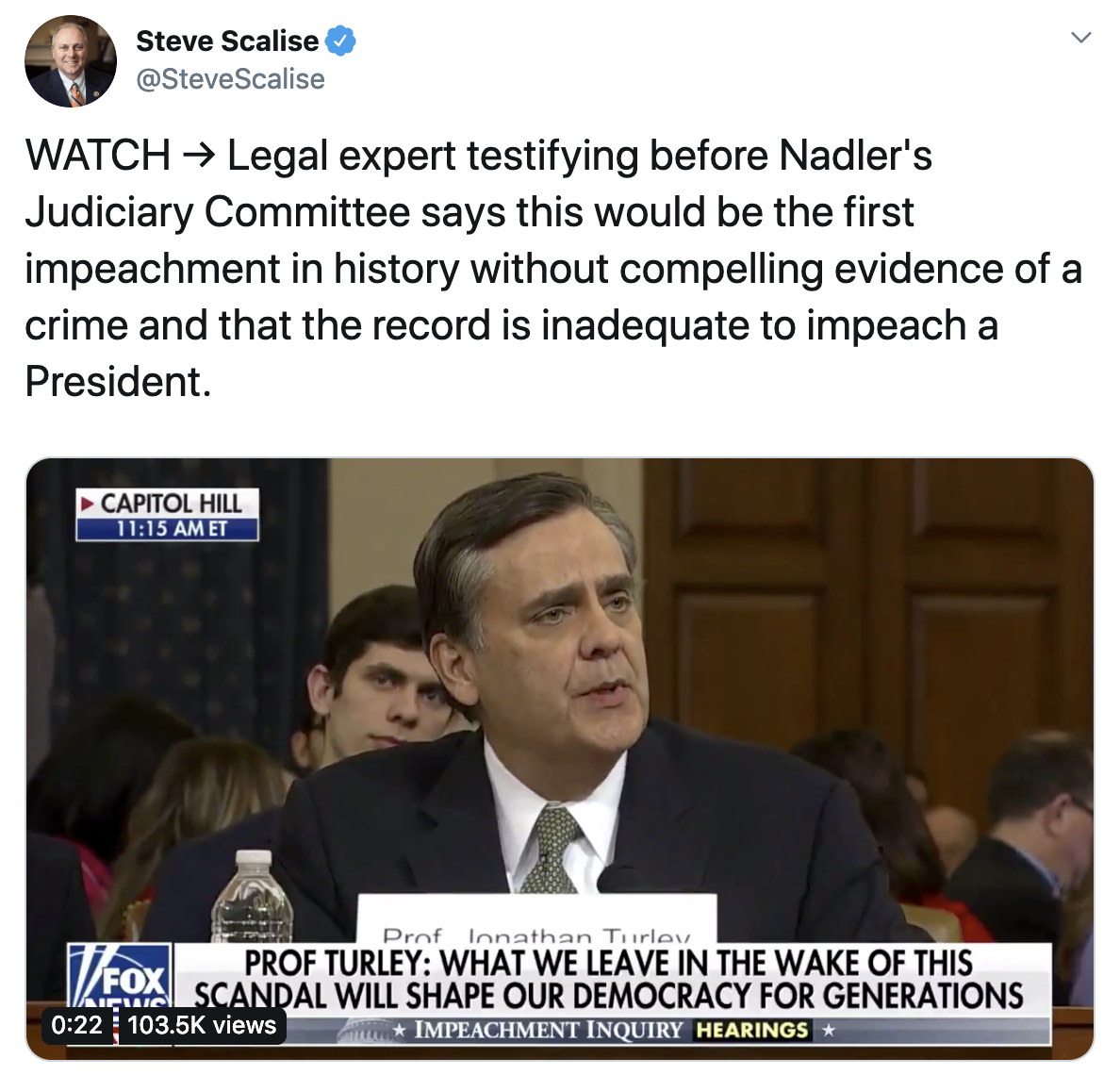 Fact witness after fact witness in the Intelligence Committee’s impeachment hearings testified that President Trump had no personal involvement in a quid pro quo, bribery, extortion, or any number of crimes Democrats have accused him of committing. Now, in an exchange with Rep. John Ratcliffe, we heard the same case from a legal expert:

Rep. Ratcliffe: “If I were to summarize your testimony: No bribery, no extortion, no obstruction of justice, no abuse of power, is that fair?”

Professor Turley: “Not on this record.” 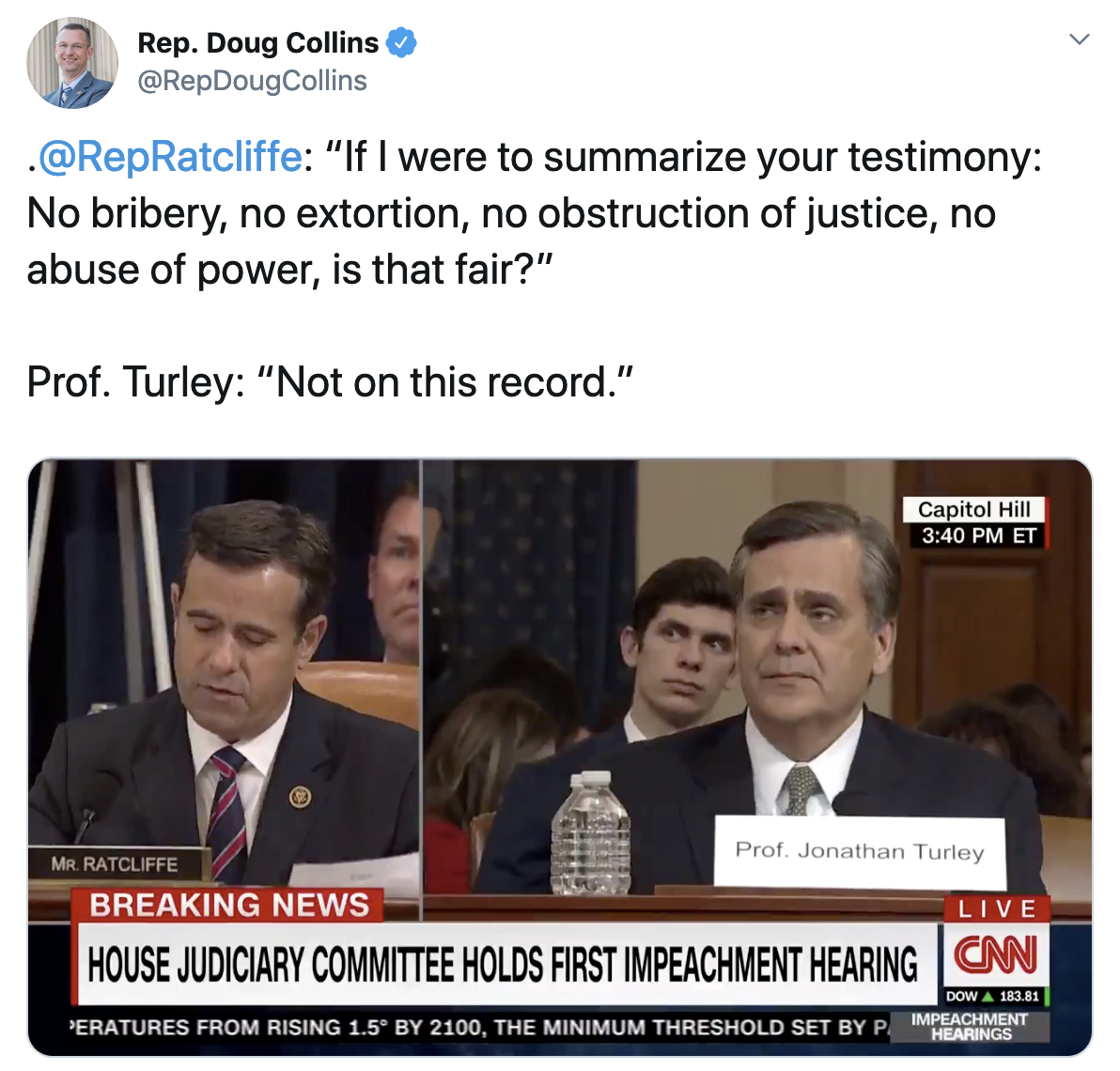 It’s hard to understand why Democrats — scrambling for ways to convince the American public that this impeachment process is fair or warranted — invited liberal law professors to lecture Americans on arcane aspects of English common law.

Rep. Matt Gaetz cut to the chase, “If you have personal knowledge of a single material fact in the Schiff report, please raise your hand.”

…no one raised their hand. 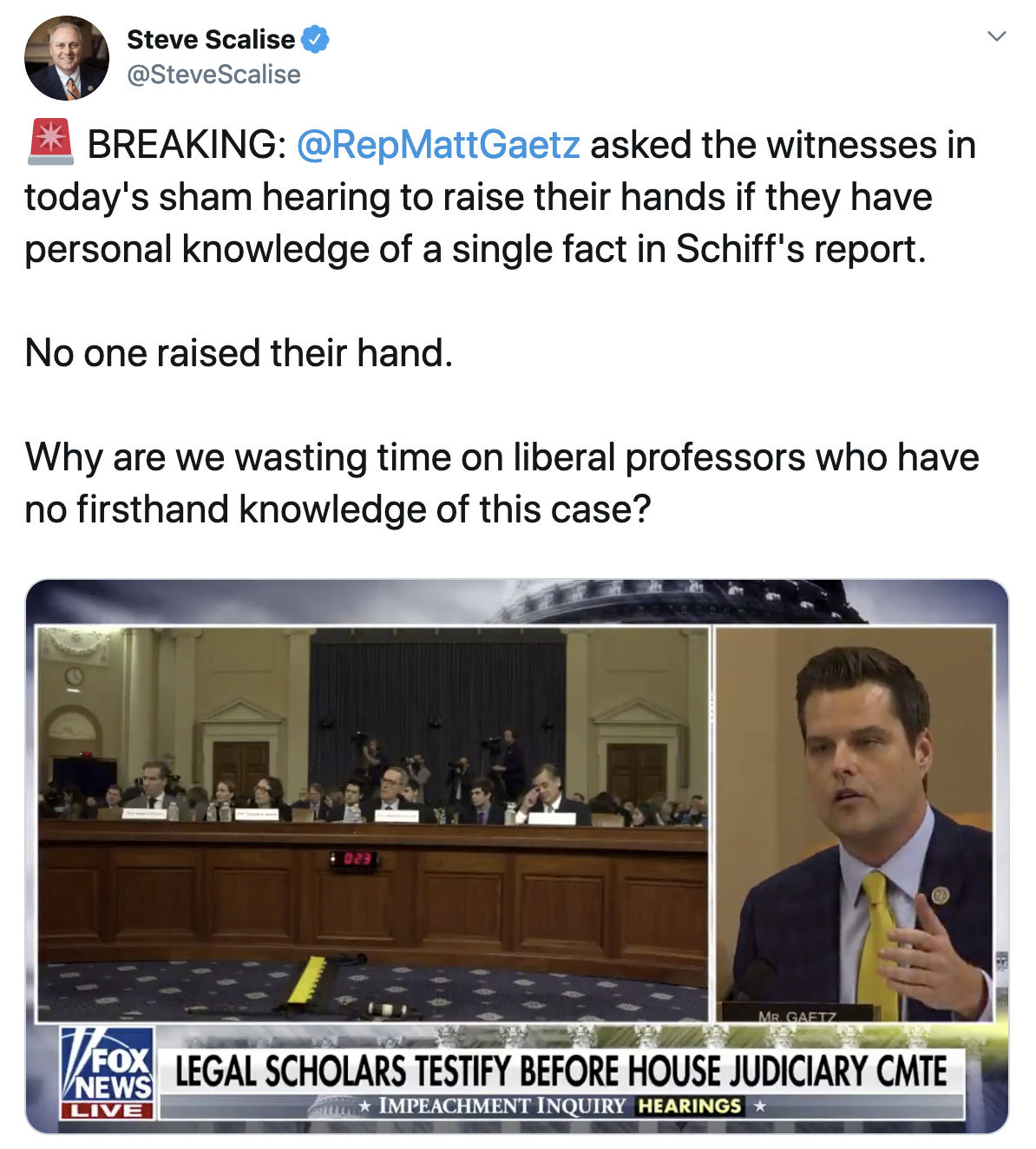 Meanwhile, just hours before the start of the Judiciary Committee’s hearing, The Hill published the following article:

“The drop in support for impeachment in the polls is increasing pressure on Democrats to strike a deal on the U.S.-Mexico-Canada Agreement (USMCA).

“House Democrats have been eager to prove that impeachment is not getting in the way of legislative progress, a point Republicans have repeatedly pressed.

“For months, Speaker Nancy Pelosi (D-Calif.) has insisted that House Democrats were working to get consensus on President Trump’s signature trade deal, which would update the North American Free Trade Agreement (NAFTA).

“She has also been adamant that impeachment would not affect USMCA talks, or vice versa, and that the tracks are totally separate.

“‘They have nothing to do with each other,’ she said as the impeachment process kicked off.

“But with the presidential election less than a year away, the political ramifications of the impeachment process are at the front of Democrats’ minds. Progress on a popular bipartisan issue could help assuage moderate voters.”

As a reminder — every minute spent in impeachment hearings is a minute we could have spent fixing trade deals, lowering prescription drug prices, addressing the security and humanitarian crisis on the southern border, and passing the NDAA.

Democrats have proven incapable of investigating President Trump and conducting the American people’s business. It’s a shame and this process is a sham.

Bottom line: Democrats should heed Professor Turley’s warning on their rush to impeach President Trump: “If you make a high crime and misdemeanor out of going to the courts, it is an abuse of power. It’s YOUR abuse of power.”