Newly Released Documents Contradict Fauci Testimony to Congress:​ According to documents obtained by The Intercept, the U.S. government gave $3.1 million to the health organization, EcoHealth Alliance, to back bat coronavirus research at the Wuhan Institute of Virology (WIV) and that almost $600,000 of that federal money was partially used by the WIV to find and alter bat coronaviruses that could jump to humans and infect them. If true, this means that Dr. Anthony Fauci has lied for months about the United States’ support for gain-of-function research at the WIV.

China Refuses to Cooperate with the United States’ Probe into COVID-19’s Origin: The U.S. intelligence community has failed to reach a definitive conclusion about whether or not the coronavirus escaped from a lab in China or came into contact with humans through an infected animal. In an unclassified summary released by the Office of the Director of National Intelligence, the U.S. intelligence community blamed their limited findings on the Chinese Communist Party’s lack of cooperation with investigators.

CDC Waited to Relax Social Distancing Requirements, Despite the Data: In Scott Gottlieb’s new book, the former FDA Commissioner writes that the CDC moved too slowly at several points in the coronavirus pandemic. In addition, Gottlieb points out that after Joe Biden became President, the CDC finally reduced social distancing recommendations to three feet. However, this data had already been available for six months.

Biden Reverses Course, Orders Vaccine Mandate: On September 9th, President Biden announced that he would mandate businesses – with 100 or more employees – to require their personnel to be vaccinated or be tested for the coronavirus each week. If companies fail to comply, they will face steep fines. This is an unprecedented, authoritarian mandate that would affect an estimated 100 million people, and one that even President Biden said, mere months ago, that he would not impose.

CDC Updated Mask Guidance After Biden White House Received Threat From Teachers Union: Emails obtained through the Freedom of Information Act show the Biden Administration changed its masking guidance after the National Education Association (NEA), a prominent teachers union, threatened to criticize the Biden Administration publicly. The emails reveal coordination between Biden White House officials and the NEA after the teachers union drafted a statement that included fierce condemnation of the CDC’s masking guidance. Ultimately, the NEA ultimately published a gentler statement, and the CDC indicated that everyone should be masked in schools, regardless of vaccination status. This is the latest example of teacher union bosses influencing the Biden Administration’s messaging on mask guidelines.

Scalise Holds Clyburn to His Word, Corrects the Record on the Biden Administration’s Botched Emergency Rental Assistance Program: House Republican Whip and Select Subcommittee on the Coronavirus Crisis Ranking Member Steve Scalise (R-La.) sent a letter to Chairman Clyburn that raised concerns about the Chairman’s partisan investigation of rental assistance programs in Republican-led states. The letter highlights how, rather than honor his commitment to require Treasury Secretary Janet Yellen to testify about the Biden Administration’s failure to administer $46 billion in rent relief, Chairman Clyburn attempted to shift the blame for the slow rollout of the federal rent relief program to Republican governors.

“Biden issued a mandate on Thursday requiring all federal employees to be vaccinated in the coming months or risk possibly losing their jobs. His administration will also require federal contractors to ensure their employees are vaccinated. The mandate affects some 100 million Americans, according to the Associated Press. The move was a reversal of the administration’s previous stance. Biden’s Press Secretary, Jen Psaki, was asked in July whether the federal government should step in and issue vaccine mandates. Psaki said such mandates were ‘not the role of the federal government.’”

“Vaccine mandates can’t end the spread of the virus as effectiveness declines and new variants emerge. So how can they be a sensible policy? Is it sensible to consign tens of millions of people to an indeterminate number of boosters and the threat of job loss if it isn’t clear more doses will stop the spread, either? The sensible approach, based on the available data, is to promote vaccines for the purpose of preventing serious illness. You don’t need a mandate for this—adults can make their own decisions. But mandates will prolong political conflicts over Covid-19, and they are an increasingly unsustainable strategy designed to achieve an unattainable goal.”

Child obesity levels in the U.S. increased significantly during the COVID-19 pandemic, particularly among children who were already obese from the outset, according to the findings of a new report from the Centers for Disease Control and Prevention (CDC). The CDC’s Dr. Alyson Goodman, who contributed to the report, said the results signal a ‘profound increase in weight gain for kids’ and are ‘substantial and alarming.’ The study, released Thursday, is the largest yet to look at obesity trends during the pandemic. Among its chief findings was that roughly 22% of children and teens were obese last August – up from 19% a year earlier.”

Republicans press FDA chief on COVID-19 booster scuffle (The Washington Times)
“Senior House Republicans accused President Biden of ‘playing politics’ with COVID-19 booster shots on Tuesday and told the Food and Drug Administration to divulge what it told the White House ahead of a planned Sept. 20 start to the rollout. House Minority Whip Steve Scalise and Rep. James Comer, the top Republican on the House Oversight Committee, said the decision to move ahead with a third dose of the Pfizer-BioNTech and Moderna vaccines ‘stunned’ federal regulators who hadn’t vetted the data and signed off on the idea.”

“[Yuma County Sheriff] Wilmot says Yuma’s arrests so far this year include 17 people from special interest countries with ties to terrorism, a particular issue now with the world’s bad actors energized by the Afghanistan bugout. Yuma has had 6,000 got-a-ways this year to go with Tucson’s 105,000. Who are these people? No one knows their names, home countries, what they’re carrying, or whether they wish Americans well or ill. They are given no background check and certainly no Covid test. But they are with us now. It’s a mess—a national security and humanitarian nightmare.”

House Republican Whip and Select Subcommittee on the Coronavirus Crisis Ranking Member Steve Scalise (R-La.) calls out Democrats for their hypocrisy on masks and vaccine mandates. 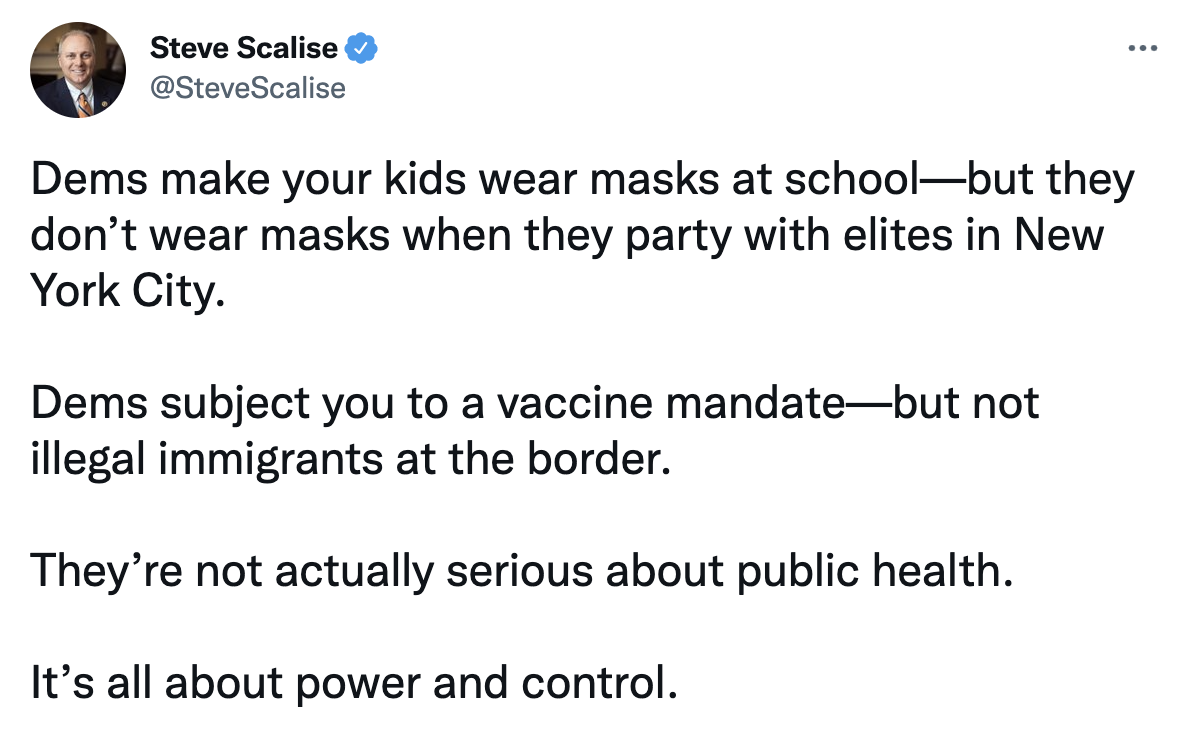 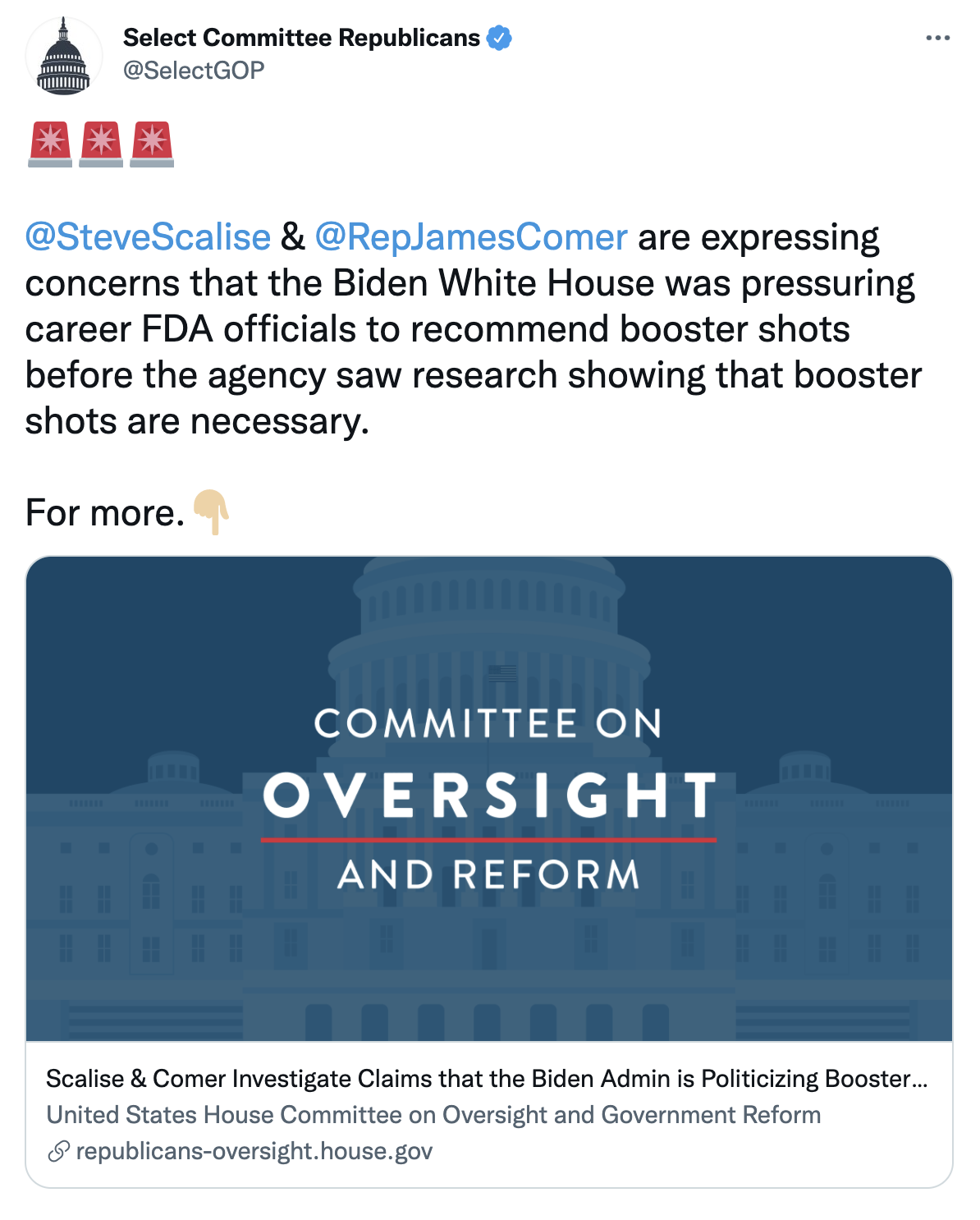 Representative Mark Green (R-Tenn.) emphasizes that the American people should have the freedom to decide about the vaccine and that their medical information should remain private. 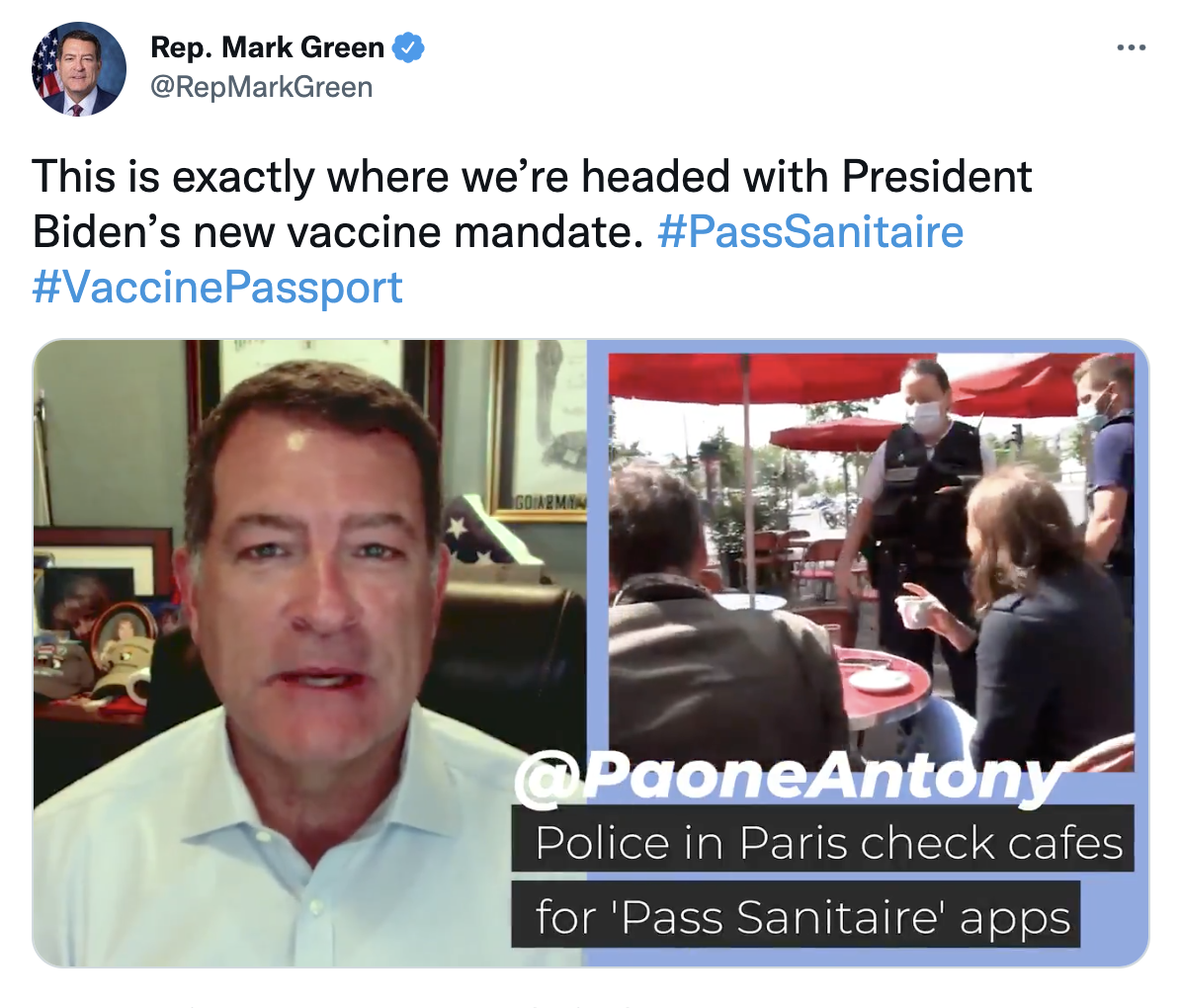 House Oversight Committee Ranking Member James Comer (R-Ky.) is demanding that the Director of National Intelligence hand over crucial documents and emails after the Intelligence Community’s investigation into the origin of COVID-19 failed to reach a conclusion. 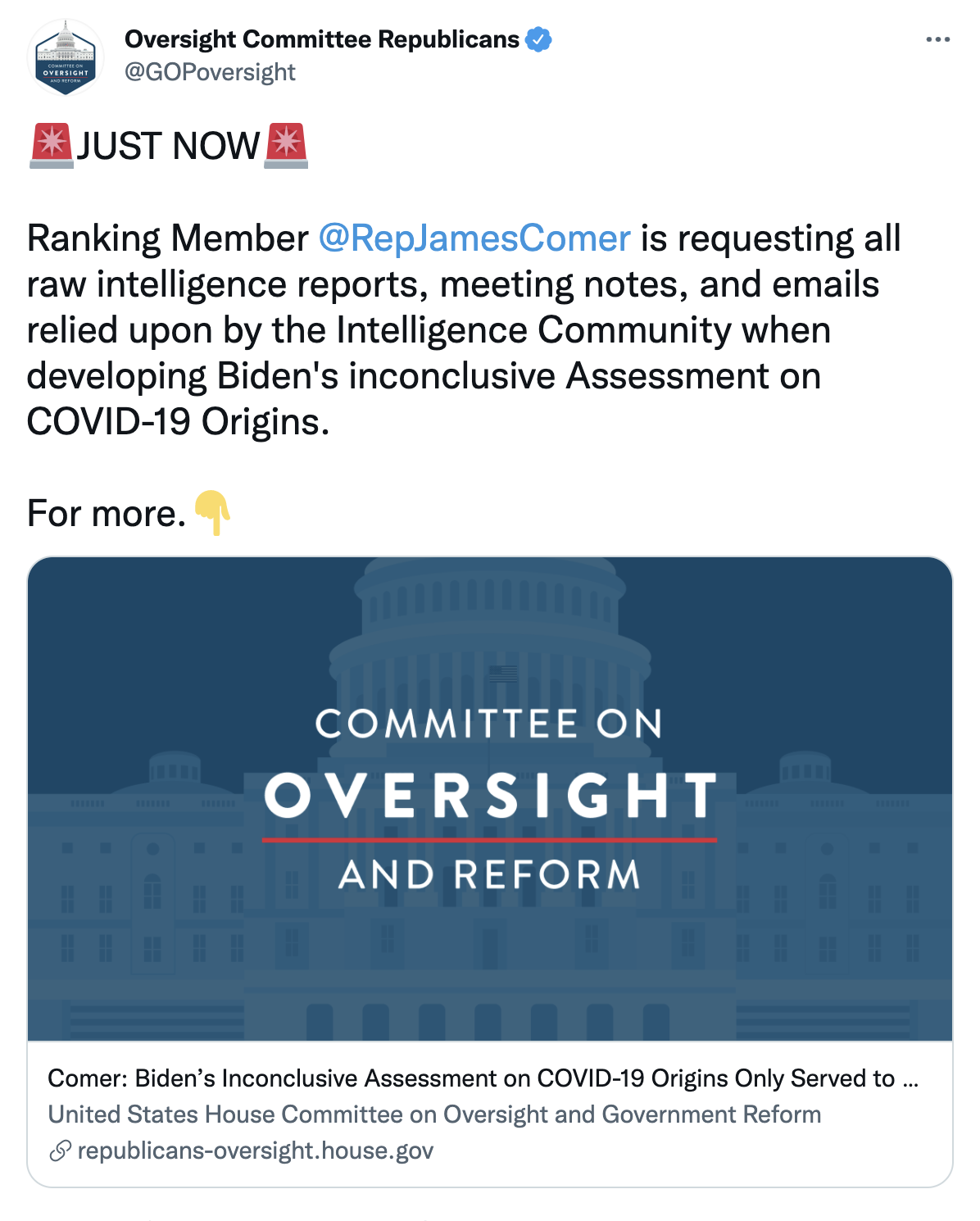 Representative Nicole Malliotakis (R-N.Y.) points out that Biden said he was originally against vaccine mandates.