Biden’s Booster Plan Creates Confusion: The FDA authorized Pfizer’s COVID booster shots for people 65 years old and older, individuals 18 through 64 years of age at high risk of severe COVID-19, and 18 to 64-year-olds who are frequently exposed to COVID either through their work or repeated exposure to the coronavirus. However, the CDC’s Advisory Committee on Immunization Practices voted against recommending Pfizer vaccine booster shots for workers in high-risk professions. In an unusual move, Rochelle Walensky, the Director for the CDC, overruled part of the CDC advisory panel’s decision and said that workers in high-risk professions should also be eligible for booster shots.

Biden’s Department of Homeland Security Did Not Test Migrants for COVID-19: Alejandro Mayorkas, Secretary of the Department of Homeland Security, told reporters that the nearly 15,000 migrants who were camped out under the Del Rio bridge last week were not tested for COVID-19. In an interview, Secretary Mayorkas stated that more than 10,000 migrants have been released into United States.

Biden White House Opposes Prohibiting Service Members from Receiving a Dishonorable Discharge for Refusing Vaccine: The COVID-19 vaccine is one of more than a dozen vaccines required for service members. The Biden White House said it strongly opposes a provision in the 2022 NDAA that would block the Pentagon from dishonorably discharging a service member who refuses to get the coronavirus vaccine.

Biden’s Border Crisis Went From Bad To Worse: While President Biden was vacationing in Delaware, more than 15,000 migrants congregated under the Del Rio international bridge, waiting to be apprehended by U.S. Border Patrol. The migrants may be carrying COVID-19, and Border Patrol agents are overwhelmed. The Biden Administration’s far-left immigration policies have led to the catastrophe at our southern border.

San Francisco Mayor Seen Partying Maskless With BLM Co-Founder, Violating Health Order: San Francisco Mayor London Breed was seen partying and singing maskless in a nightclub with a Black Lives Matter co-founder, breaking her city’s mask mandate. San Francisco’s mask mandate states, “Everyone, including people who are fully vaccinated, must wear a well-fitted mask in indoor public settings at all times,” and, “people may remove their well-fitted mask while actively eating or drinking.”

Los Angeles County Criticized For COVID-19 Double Standard Due to Relaxed Rules for Emmys Ceremony: Actor and comedian Seth Rogen questioned the safety of the Emmys, pointing to the large crowd of unmasked people who had gathered for the event. The Los Angeles County Department of Public Health said that the Emmy awards ceremony was compliant with COVID-19 mandates, despite the concerns that were raised. Regardless of vaccination status, those not actively participating in a music, TV, or film production – anyone who is not a wealthy Hollywood celebrity – are still required to wear face coverings indoors in Los Angeles.

Select Committee Republicans Call Out Democrats’ Partisan Diversions At Hearing: House Republican Whip and Ranking Member of the Select Subcommittee on the Coronavirus Crisis Steve Scalise (R-La.) criticized Select Committee Democrats for attempting to use their hearing to sell President Biden and Speaker Pelosi’s trillion-dollar tax-and-spending spree. Whip Scalise questioned why House Democrats have not held a single hearing on the origins of the COVID-19 and pointed out that there are serious questions regarding whether the U.S. funded gain-of-function research at the Wuhan Institute of Virology. In addition, Whip Scalise expressed concerns that the Biden White House was pressuring career FDA officials to recommend booster shots before the agency saw research showing that booster shots are necessary.

CDC director approves Pfizer boosters, adds eligibility for high-risk workers (Axios)
“Driving the news: But in an unusual move, CDC director Rochelle Walensky late Thursday overruled part of the advisory committee’s decision and said that workers in high-risk jobs should also be eligible for booster shots. Why it matters: The approval was a near-final step in making the booster shots available to tens of millions of Americans, and comes a day after the FDA approved Pfizer boosters for the two groups.”

Officials: Many migrants from border camp staying in US (AP)
“Many Haitian migrants camped in a small Texas border town are being released in the United States, two U.S. officials said, undercutting the Biden administration’s public statements that the thousands in the camp faced immediate expulsion. Haitians have been freed on a ‘very, very large scale’ in recent days, according to one U.S. official who put the figure in the thousands. The official, who has direct knowledge of operations, was not authorized to discuss the matter Tuesday and spoke on condition of anonymity.”

COVID-19 creates dire US shortage of teachers, school staff (AP)
“One desperate California school district is sending flyers home in students’ lunchboxes, telling parents it’s ‘now hiring.’ Elsewhere, principals are filling in as crossing guards, teachers are being offered signing bonuses and schools are moving back to online learning. Now that schools have welcomed students back to classrooms, they face a new challenge: a shortage of teachers and staff the likes of which some districts say they have never seen. Public schools have struggled for years with teacher shortages, particularly in math, science, special education and languages. But the coronavirus pandemic has exacerbated the problem. The stress of teaching in the COVID-19 era has triggered a spike in retirements and resignations. Schools also need to hire staffers like tutors and special aides to make up for learning losses and more teachers to run online school for those not ready to return.”

Between Covid-19 and the flu, health care professionals are bracing themselves for the winter ahead, expert says (CNN)
“The US is battling rising death tolls and strained hospital resources under the COVID-19 pandemic, and all that could be made more difficult by the upcoming flu season, health experts said. ‘We are bracing ourselves for an awfully busy winter ahead,’ Associate Dean of Public Health at Brown University Dr. Megan Ranney told CNN Tuesday. The United States is once again at a point where an average of more than 2,000 people are dying of Covid-19 every day, according to data from Johns Hopkins University. And hospitals are straining to keep up with the number of patients coming in. Staff shortages and employee fatigue in Pennsylvania hospitals have reached a point where some health systems are offering signing bonuses, loan forgiveness and other incentives to staff.” 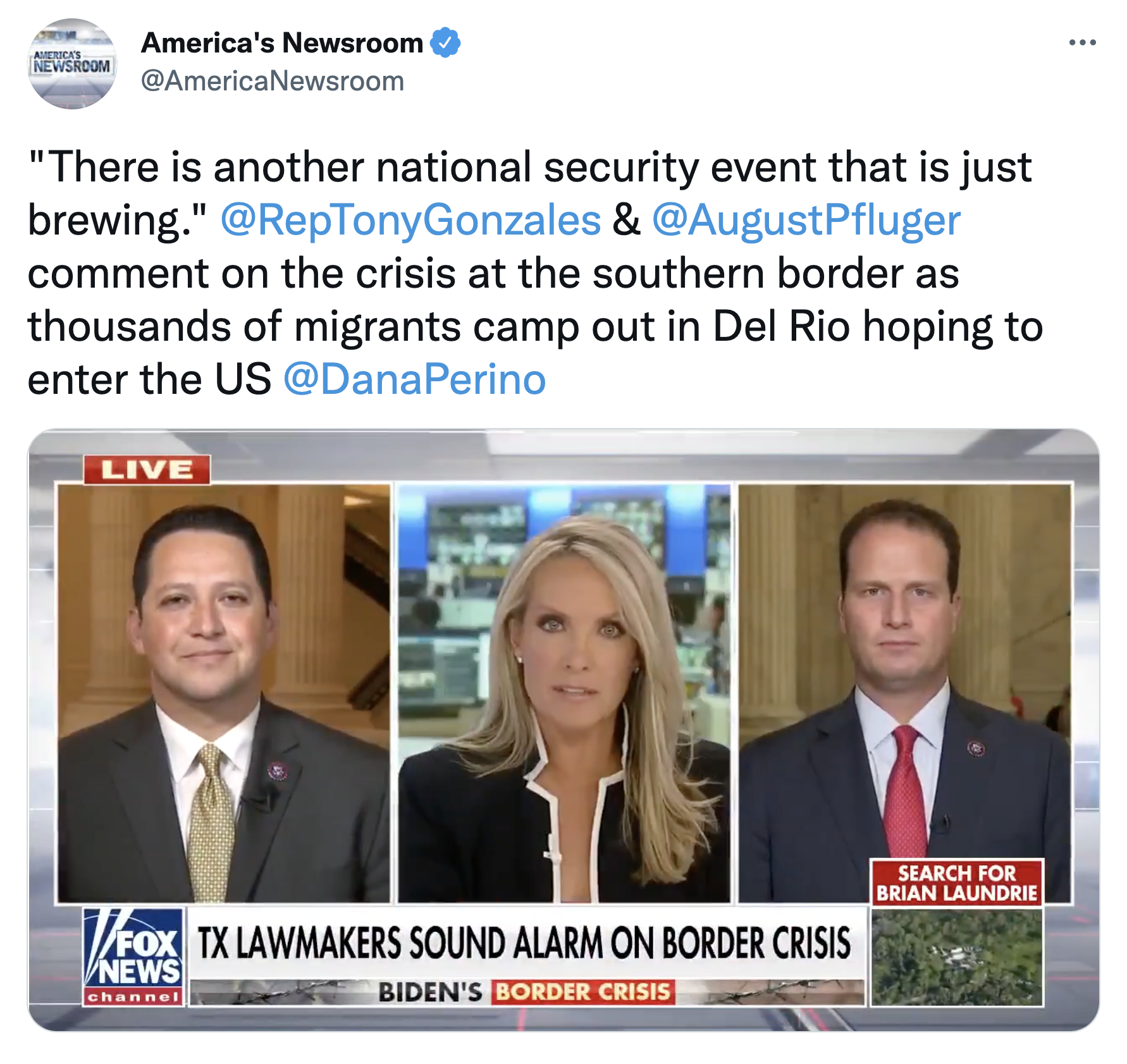 Representative Mariannette Miller-Meeks (R-Iowa) highlights her legislation which would require the Department of Homeland Security to test all migrants illegally entering the United States for the coronavirus. 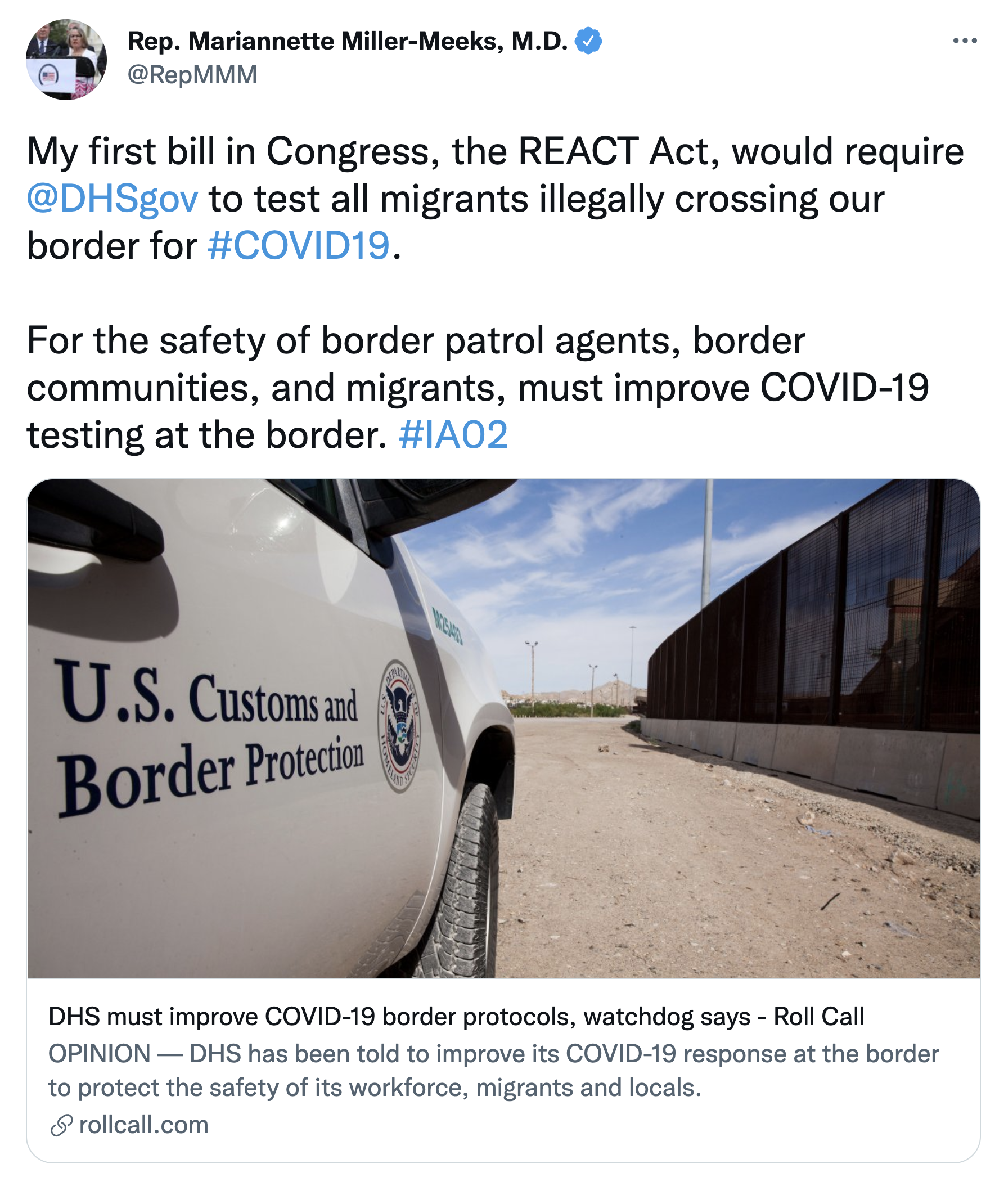 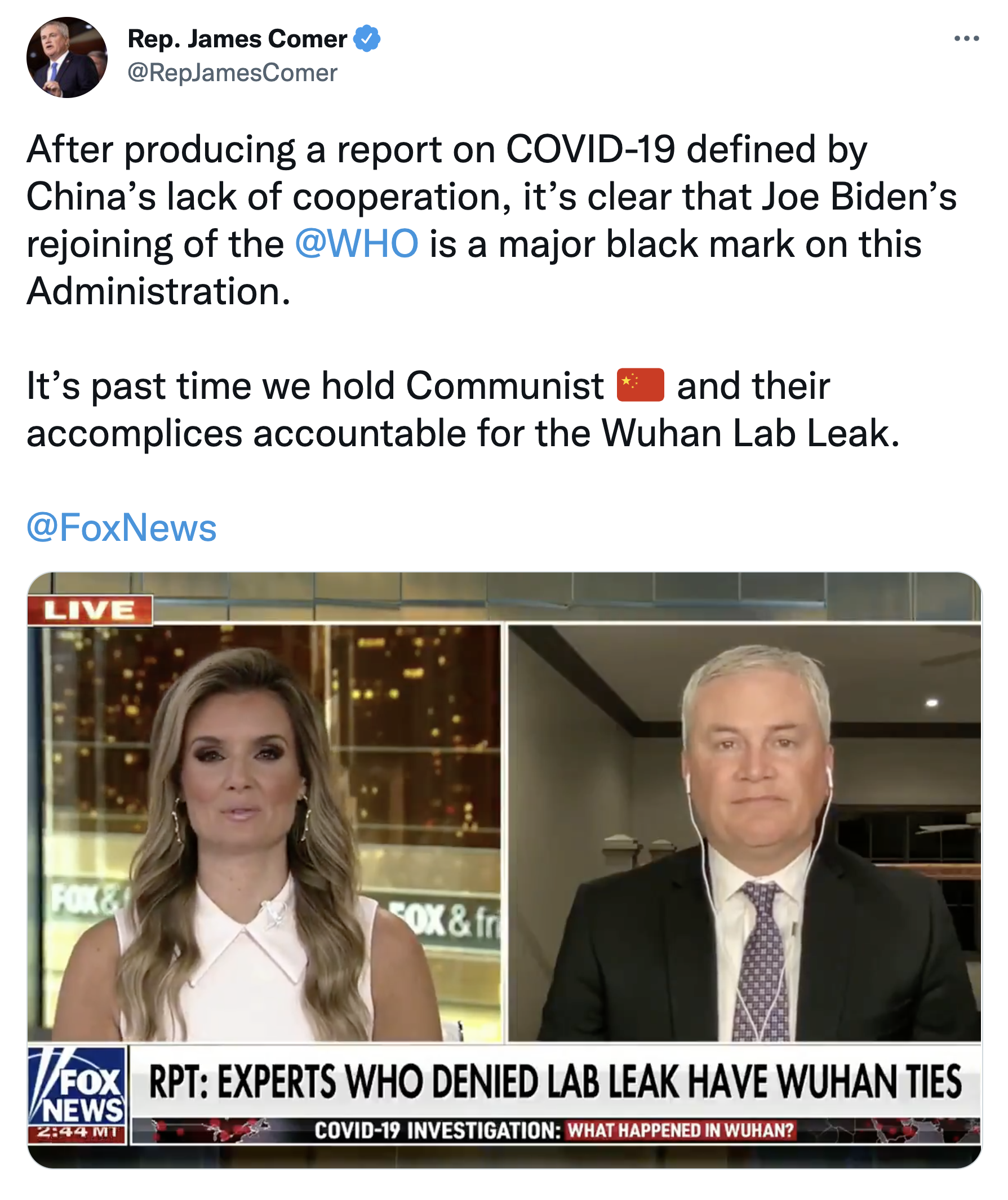 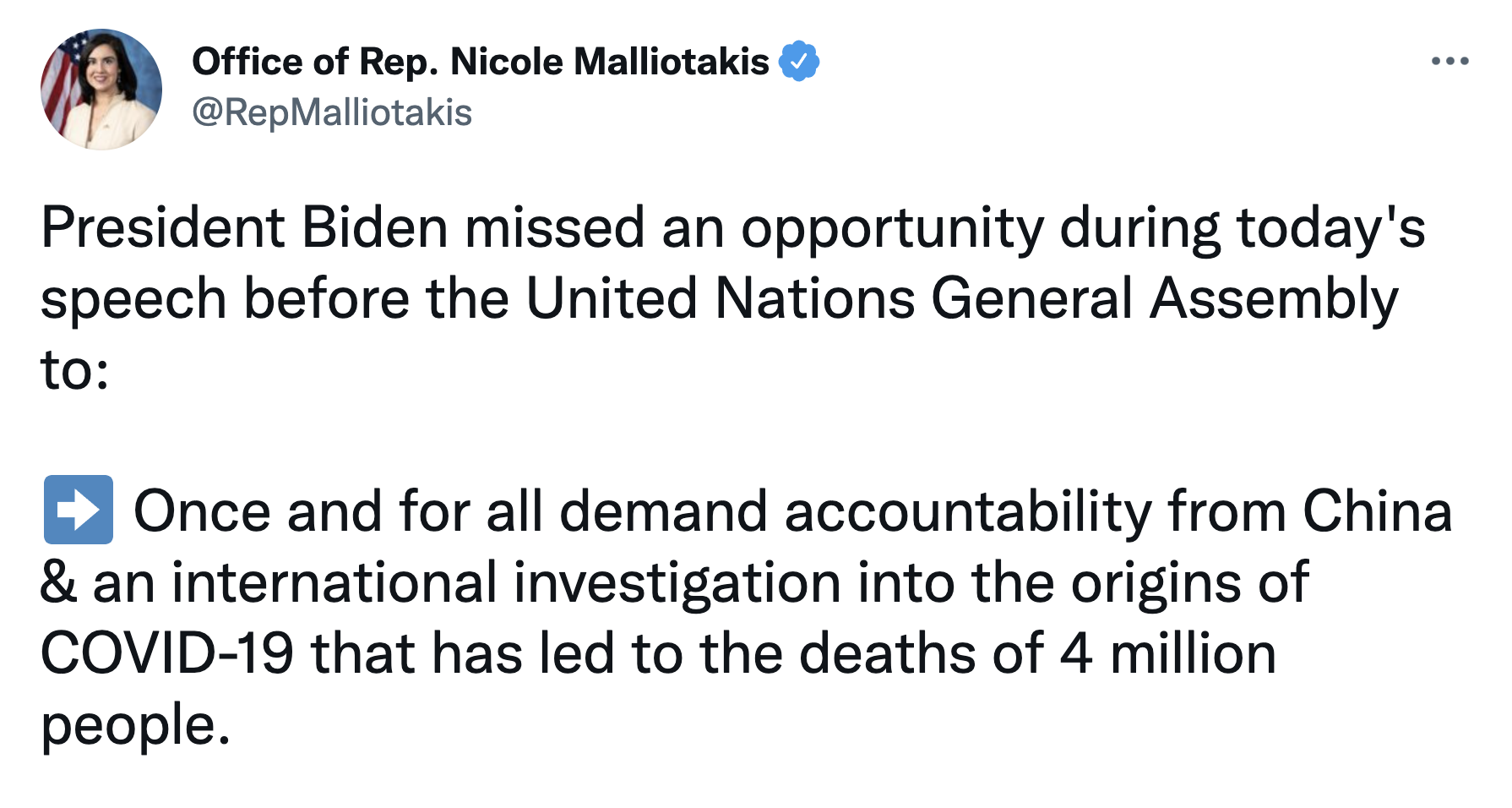 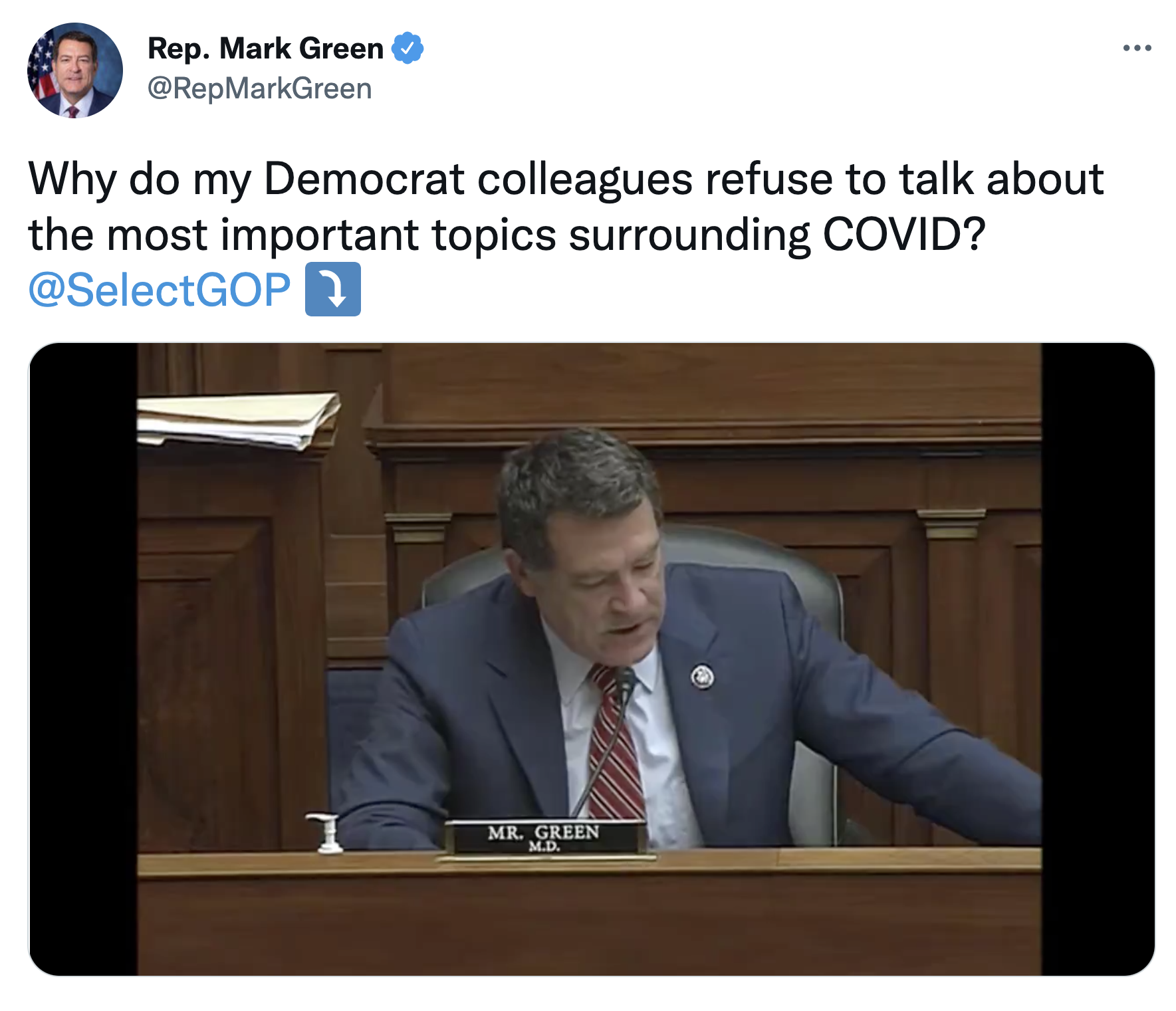