Select Subcommittee Reconvenes to Promote Pelosi Payoff: Democrats didn’t hold any hearings during some of the most critical months of the COVID-19 pandemic but returned last week just to try to sell Speaker Pelosi’s Payoff to Progressives Act.

Opening the Economy Key to Economic Recovery: Economic expert Larry Kudlow last week testified about the importance of reopening the economy and getting shots in Americans’ arms to ensure economic recovery and prosperity. He warned against continuing lockdowns, cancelling energy projects, and increasing regulations, underscoring these actions kill American jobs and hurt the most vulnerable American workers.

Virtual Learning Harming Both Parents and Children: Last week, the CDC released a survey showing virtual school places stress on both parents and children and poses risks to their mental health and well-being. Parents reported “they were emotionally distressed, concerned about job stability and struggling to balance work and child care” if their children were not in school. Parents also reported the emotional health of their children worsened and their physical activity decreased. Study after study shows children can return safely to the classroom, and last week the CDC eased its social distancing requirements for schools. Despite the clear science, President Biden continues to follow the unions instead of science.

Select Subcommittee Democrats Go Silent During Critical Months of Pandemic: Last week, Republican Whip and Select Subcommittee Ranking Member Steve Scalise (R-La.) criticized Democrats for not holding any hearings during some of the most critical months of the COVID-19 pandemic, only to return from their hiatus just to try to sell Speaker Pelosi’s Payoff to Progressives Act. He emphasized how the Select Subcommittee should focus on accelerating the COVID-19 vaccine rollout, safely reopening our schools, protecting our nation’s most vulnerable, holding China accountable, and ensuring taxpayer dollars are being spent appropriately. Instead, Democrats’ prioritized Speaker Pelosi’s $1.9 trillion package of progressive priorities where over 90% of the bill isn’t even related to public health spending.

Newsom Says He’s a Zoom School Parent but His Kids Have Been In School Since November: California Governor Gavin Newsom, who has issued some of the most extreme lockdown measures in the country, last week said he too was “living through Zoom school.” However, he failed to mention that his children returned to private school for in-person learning five months ago.

Biden Proposed Tax Hike Could Hit Americans Making $200,000, Breaking Key Promise: President Biden repeatedly pledged to not raise taxes on Americans making more than $400,000, but White House Press Secretary Jen Psaki clarified the tax hike could hit individuals making $200,000 a year if they are married to someone who makes the same amount. Raising taxes on those struggling under oppressive Democrat economic lockdowns will hurt recovery.

Biden’s HHS Nominee Who Sent COVID-Positive Patients to Nursing Homes Slated for Senate Confirmation: President Biden has nominated Pennsylvania Secretary of Health, Dr. Rachel Levine, for a top post at the U.S. Department of Health and Human Services, and is slated for Senate confirmation. Like New York Governor Cuomo, Levine issued a deadly order mandating nursing homes to admit COVID-19 patients. She also moved her mother out of a personal care facility before doing so.

Opening the Economy Key to Economic Recovery: Last week, the Select Subcommittee held a hearing on the post-pandemic economy. At the hearing, Republicans and minority witness Larry Kudlow emphasized the importance of reopening the economy and getting shots in Americans’ arms to ensure economic recovery and prosperity. Republicans and Kudlow also warned against continuing lockdowns, cancelling energy projects, like the Keystone Pipeline, and increasing regulations, underscoring these actions kill American jobs and hurt the most vulnerable American workers.

“Some House Democrats have called for New York Gov. Andrew Cuomo to resign over allegations of sexual harassment, but aren’t willing to investigate his role in COVID-19 deaths at nursing homes. Cuomo’s fellow Democrats seem to be trying to ‘change the narrative’ on the governor to avoid talking about the state’s nursing home deaths, said Rep. James Comer, R-Ky. ‘We are trying to hold Gov. Cuomo accountable for the nursing home deaths,’ Comer, ranking member of the House Oversight and Reform Committee, told The Daily Signal. But Maloney and other Democratic lawmakers have ignored calls from Republicans for the committee to investigate and perhaps call Cuomo to testify on the nursing home deaths.”

“As school districts around the U.S. continue to grapple with whether to reopen classrooms amid the coronavirus pandemic, data shows Florida started in-person learning without turning schools into superspreaders. The state was one of the earliest to resume in-person instruction in August, following an executive order by Education Commissioner Richard Corcoran that directed districts to provide families the option of classroom learning five days a week or risk losing funding … In the seven months since, Florida schools have avoided major outbreaks of Covid-19 and maintained case rates lower than those in the wider community.”

“Parents whose children received virtual instruction were more likely to report poorer well-being for themselves and their kids, a federal government survey found. The parents were more likely to report that they were emotionally distressed, concerned about job stability and struggling to balance work and child care if their children were learning virtually, according to the U.S. Centers for Disease Control and Prevention survey released Thursday. Some of the parents also reported the mental and emotional health of their children had worsened, while their physical activity had decreased.”

Some Schools Have Been Open for Months. Here’s What They Learned. (WSJ)

“[T]eachers and administrators whose buildings have been open for many months have come to some hard-earned conclusions about how to make it all work. Some of what they learned is consistent with what many scientists have been touting—that masking, ventilation, distancing and regular testing when possible are effective ways to reduce transmission of Covid-19 in schools … Some findings run counter to conventional wisdom. Hybrid learning, for example, where students split time between the classroom and home, may actually be riskier in some cases than full-time in-person classes because children are potentially exposed to more people. And it is likely fine for students to be 3 feet apart from each other instead of 6 feet, something the Centers for Disease Control and Prevention noted when it changed its guidelines on Friday.”

“Larry Summers, a top economic adviser to former President Obama, blasted the $1.9 trillion coronavirus stimulus package signed by President Biden earlier this month as the “least responsible” economic policy in 40 years. Speaking on Bloomberg Television’s “Wall Street Week” on Friday, Summers outlined his predictions for the economy in light of the relief package. ‘I think this is the least responsible macroeconomic policy we’ve had in the last 40 years,’ Summers said.” 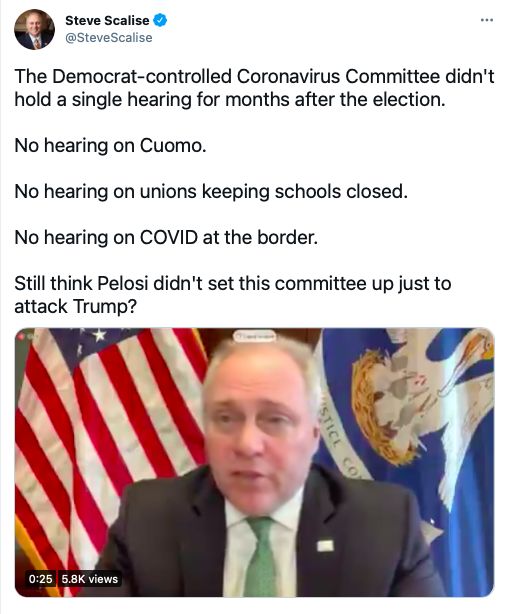 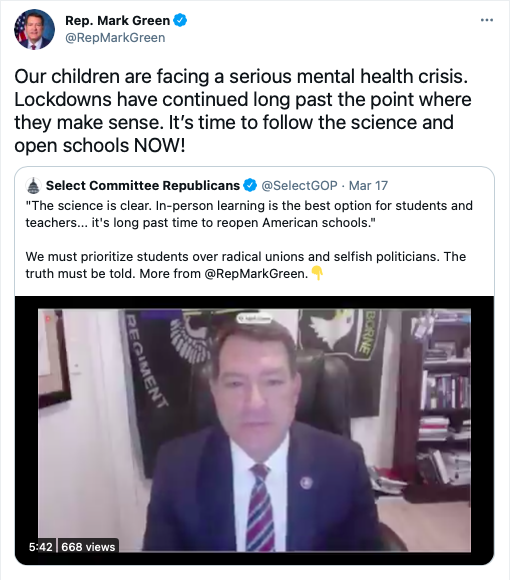 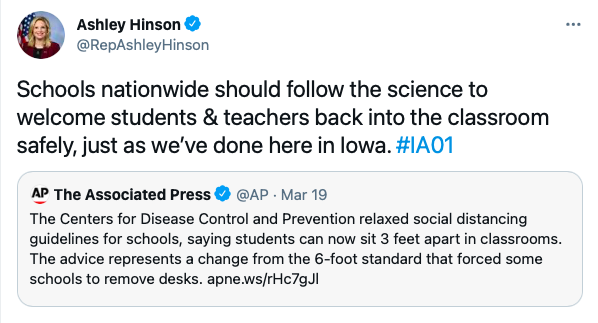 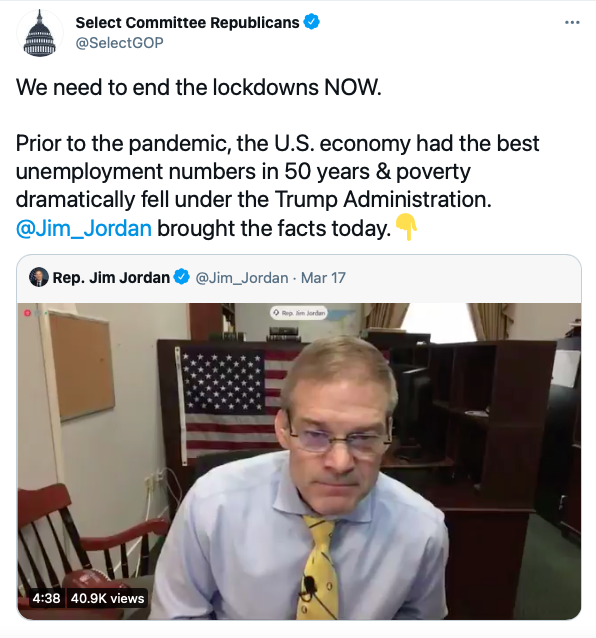 Oversight and Ways and Means Republicans call on the Department of Treasury to provide clarification on provisions in the Pelosi Payoff preventing states from implementing new tax cuts. 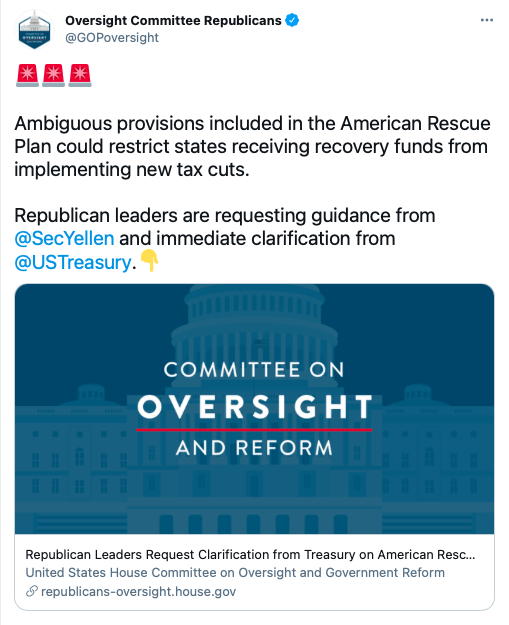 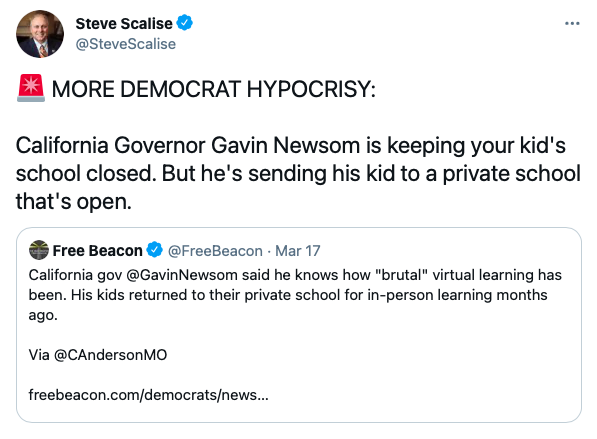