House Democrats Pass Pelosi Payoff: Last week, House Democrats passed a $2 trillion bill under the guise of COVID relief to reward political allies and fund their liberal wish-list. Only 9% of the funding contained in the bill actually goes to pandemic relief and getting shots in people’s arms.

Cuomo Cover-Up Chronology: Select Subcommittee Republicans released a three-page timeline of New York Governor Andrew Cuomo’s order mandating COVID-19 positive patients to be admitted to nursing homes and long-term care facilities, his actions to cover up the scandal, and his obstruction of congressional oversight and justice.

Here are some of the most egregious provisions in the Pelosi Payoff:

Only 9% of the funding contained in the Pelosi Payoff actually goes to pandemic relief and getting shots in people’s arms. Republicans proposed striking funding for the Pelosi subway tunnel in Silicon Valley and instead direct that funding to support mental health and suicide prevention services in states where children do not have the option of in-person instruction at school. Democrats opposed the amendment.

Millions of Children Missing Amid School Closures: Last week, the Washington Postexposed an unprecedented number of children have gone missing from school districts that have closed their doors to students. Bellwether Education Partners estimates that as many as three million children have gone missing from school districts amid the closures. Even liberal New York Times columnist, Nicholas Kristof, is now chastising Democrats for shuttering schools: “The blunt fact is that it is Democrats — including those who run the West Coast, from California through Oregon to Washington State — who have presided over one of the worst blows to the education of disadvantaged Americans in history.”

Republicans continue to call for schools to reopen. Last week, all Oversight Committee Republicans called for hearings on child welfare and reopening schools.

Cuomo Admitted He Wouldn’t Put His Mom in Nursing Home: In May 2020, Governor Cuomo admitted on national television that he wouldn’t put his mother in a nursing home despite mandating contagious COVID-19 positive patients be admitted to nursing home and long-term care facilities.

Biden Administration Admits School Funding Won’t Be Spent in 2021: Last week, the White House Press Secretary admitted the majority of the school funding in Democrats’ $2 trillion spending bill won’t be used this year. In fact, 95% of the education funding would not even be spent this year. Does the Biden Administration not plan on reopening schools this year?

Biden Seeks $1 Billion PR Campaign for Vaccine After Undermining Its Safety During the Election: Tucked away in the Democrats’ $2 trillion spending bill is $1 billion for a public relations campaign to encourage Americans to get the COVID-19 vaccine. During the election, then Democrat presidential nominee Joe Biden and Vice Presidential nominee Kamala Harris recklessly and repeatedly called into question the safety of the COVID-19 vaccines in development under Operation Warp Speed. Senator Harris even refused to say whether she would take a vaccine if developed before Election Day. Now they are asking Americans to pay for their election year politics.

Cuomo Cover-Up Timeline: Last week, Republican Whip and Select Subcommittee on the Coronavirus Crisis Ranking Member Steve Scalise (R-La.) released a chronology of New York Governor Andrew Cuomo’s order mandating COVID-19 positive patients to be admitted to nursing homes and long-term care facilities, his actions to cover up the scandal, and his obstruction of congressional oversight and justice. We need a full investigation into Governor Cuomo’s actions—anyone responsible must be prosecuted. Grieving families and the American people deserve answers and accountability.

Leader McCarthy: Dems’ $1.9 trillion COVID bill is not rescue or relief plan, it’s a Pelosi payoff (Fox News Opinion)
“When you add it all up, the price tag of Democrats’ bill is jaw-dropping. At $1.9 trillion, it is the single most expensive bill in history. But don’t call it a rescue or relief bill. Call it a Pelosi Payoff. Because the amount of money that actually goes to funding public health is less than nine percent. This is not a serious attempt to fix the real problems of the American people.”

Reps. Smith & Comer: Dems’ $1.9T COVID relief bill – wrong plan, wrong time, wrong reasons. Here’s why (Fox News Opinion)
“Democrats in Washington are charging full speed ahead on a hastily crafted, nearly $2 trillion spending package. The goal is to satisfy a political agenda and bail out political allies. The guise is COVID-19 relief. Regardless, their plan means tremendous harm to America’s working-class. It is the wrong plan, at the wrong time, for all the wrong reasons.”

The Unnecessary State Covid Bailout (WSJ Editorial Board)
“Democrats in Congress are planning to ladle out another $350 billion to state and local governments, though many haven’t finished spending their Cares Act checks and some are running budget surpluses. This is income redistribution for public unions. About one third of the $150 billion that Congress allocated in direct aid to state and local governments last spring still hasn’t been spent. These funds were intended to help governments cover pandemic needs amid budget shortfalls, but most haven’t needed it.”

COVID bill would pay federal employees to stay home with kids (Fox Business)
“Federal workers with children enrolled in a school that has not resumed full-time, in-classroom instruction would be eligible for enhanced paid time off under the U.S. House version of a $1.9 trillion coronavirus relief package being pushed through Congress. The perk would set aside $570 million for an ‘Emergency Federal Employee Leave Fund’ exclusively for federal employees.”

Nicholas Kristof: School Closures Have Failed America’s Children (NYT Opinion)
“[T]here’s another tragedy we haven’t adequately confronted: Millions of American schoolchildren will soon have missed a year of in-person instruction, and we may have inflicted permanent damage on some of them, and on our country … [T]he educational losses are disproportionately the fault of Democratic governors and mayors who too often let schools stay closed even as bars opened. The blunt fact is that it is Democrats — including those who run the West Coast, from California through Oregon to Washington State — who have presided over one of the worst blows to the education of disadvantaged Americans in history. The result: more dropouts, less literacy and numeracy, widening race gaps, and long-term harm to some of our most marginalized youth.”

Steve Scalise releases ‘Timeline of the Cuomo Cover-Up’ looking at nursing home scandal(Washington Examiner)
“Scalise, who is calling for a full investigation into Cuomo’s handling of nursing homes, began his timeline with the first COVID-19 case found in New York on March 1 of last year and ended it with Monday’s announcement of bipartisan lawmakers’ intention to subpoena the governor to testify before the House Oversight and Reform Committee. Other benchmarks include the governor signing a “lethal directive” on March 25, 2020, and receiving an Emmy for his public updates on Nov. 23.”

House Committee on Oversight and Reform Republicans call on Chairwoman Carolyn Maloney to issue subpoenas for Governor Cuomo’s testimony and documents and communications related to his deadly nursing home order. 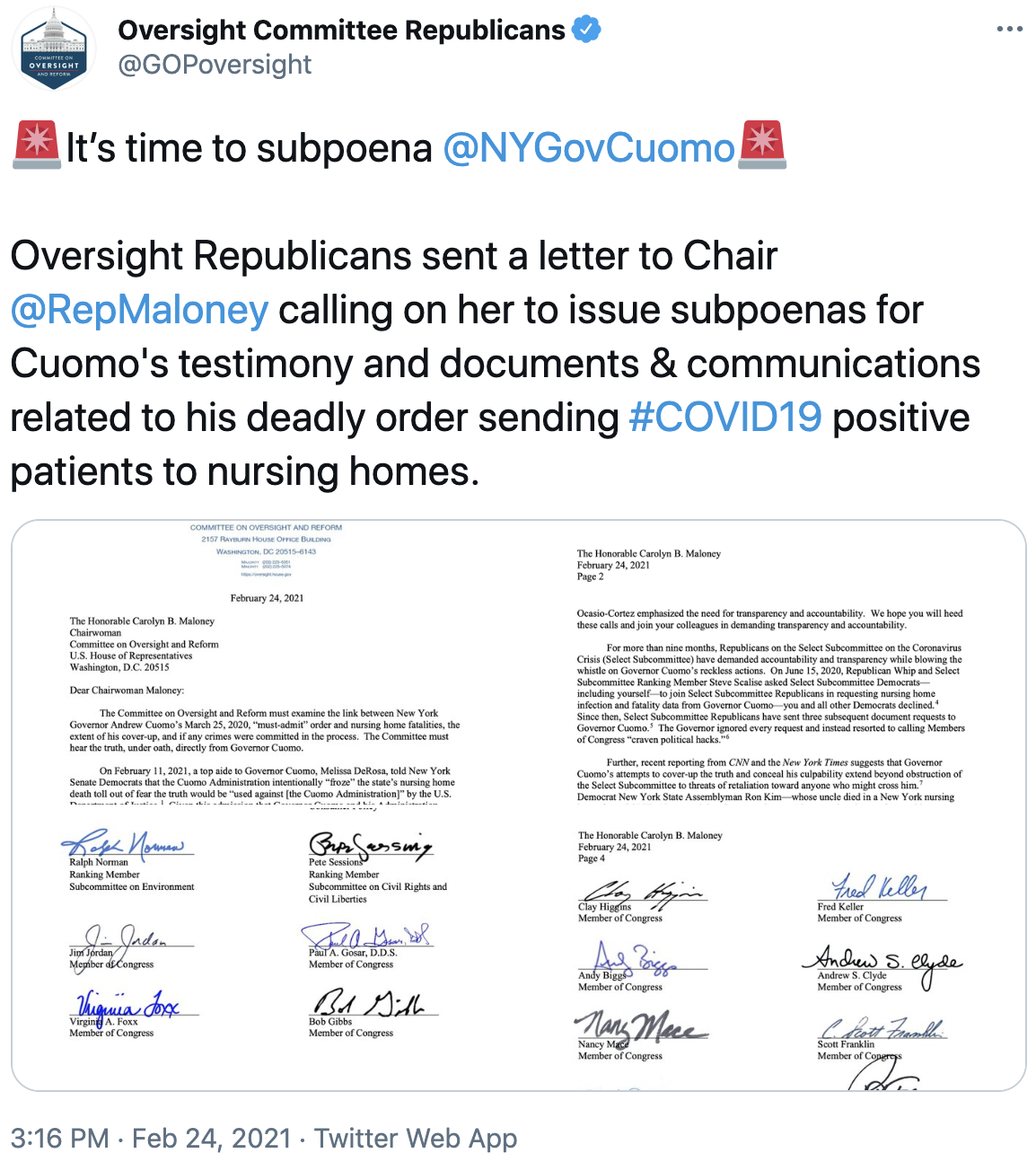 Oversight Ranking Member James Comer (R-Ky.) wants the Oversight Committee to put Governor Cuomo under oath so we can get to the truth. 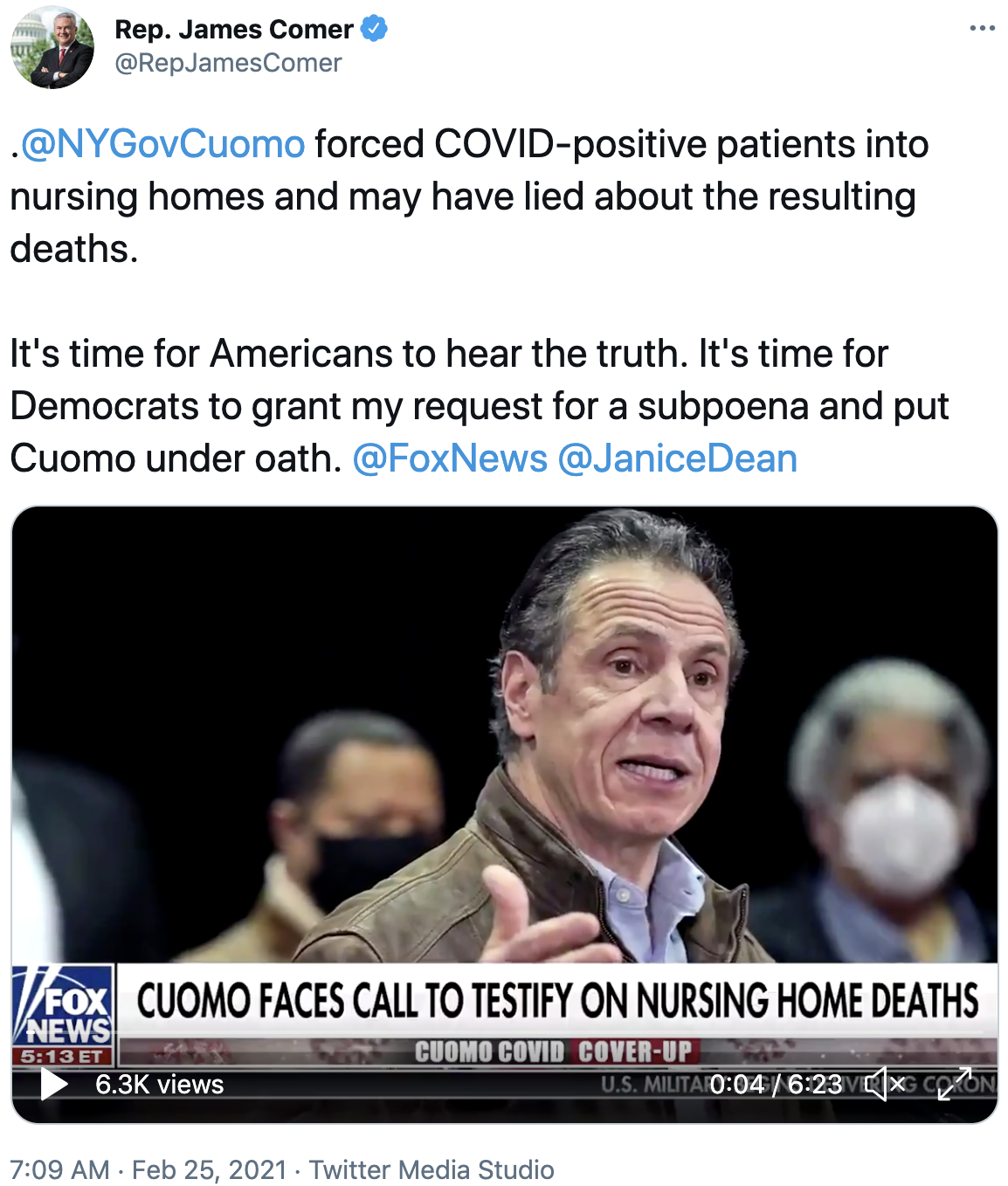 Rep. Andrew Garbarino (R-N.Y.) calls on the Justice Department to hold Governor Cuomo and his administration accountable for their actions. 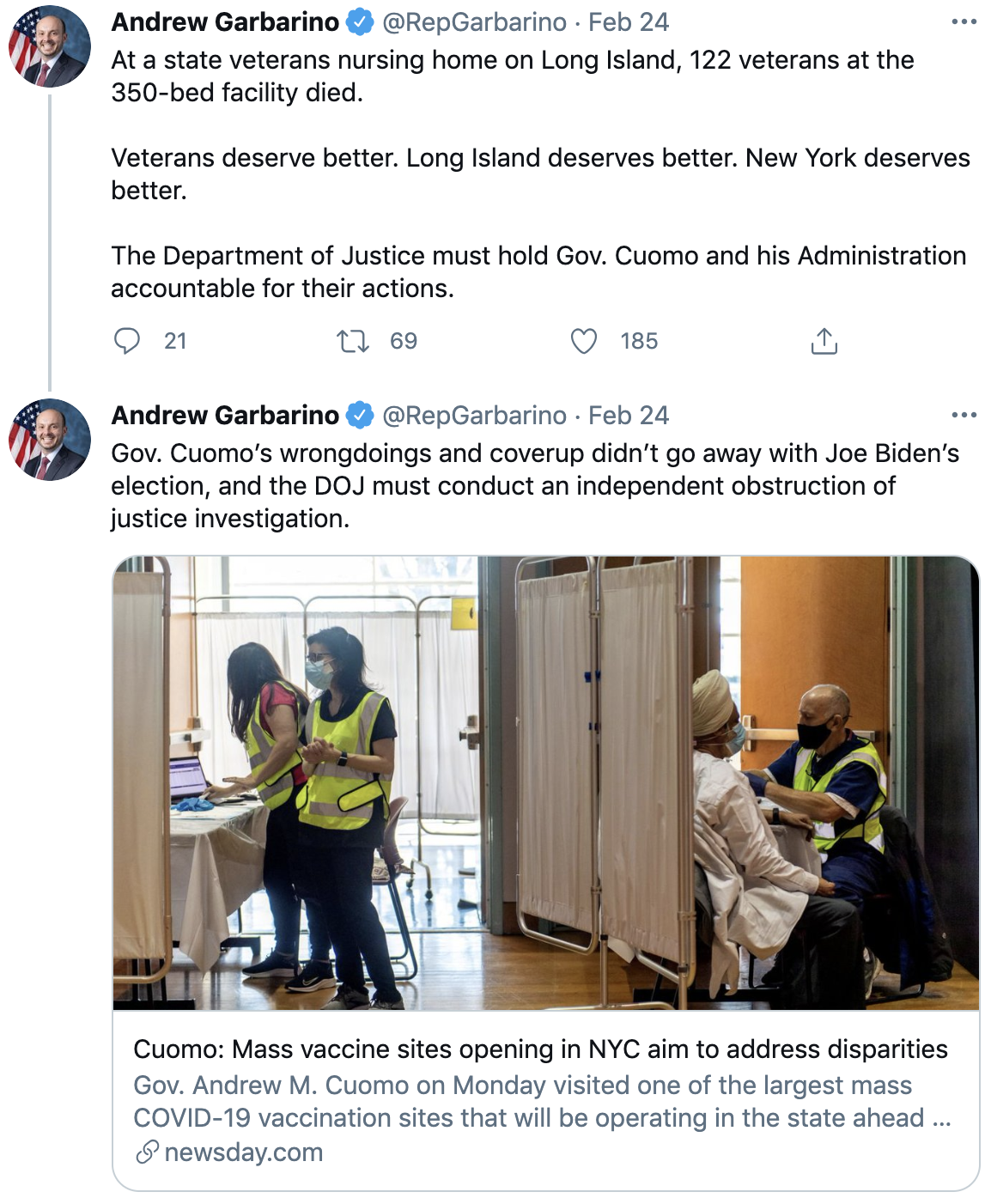 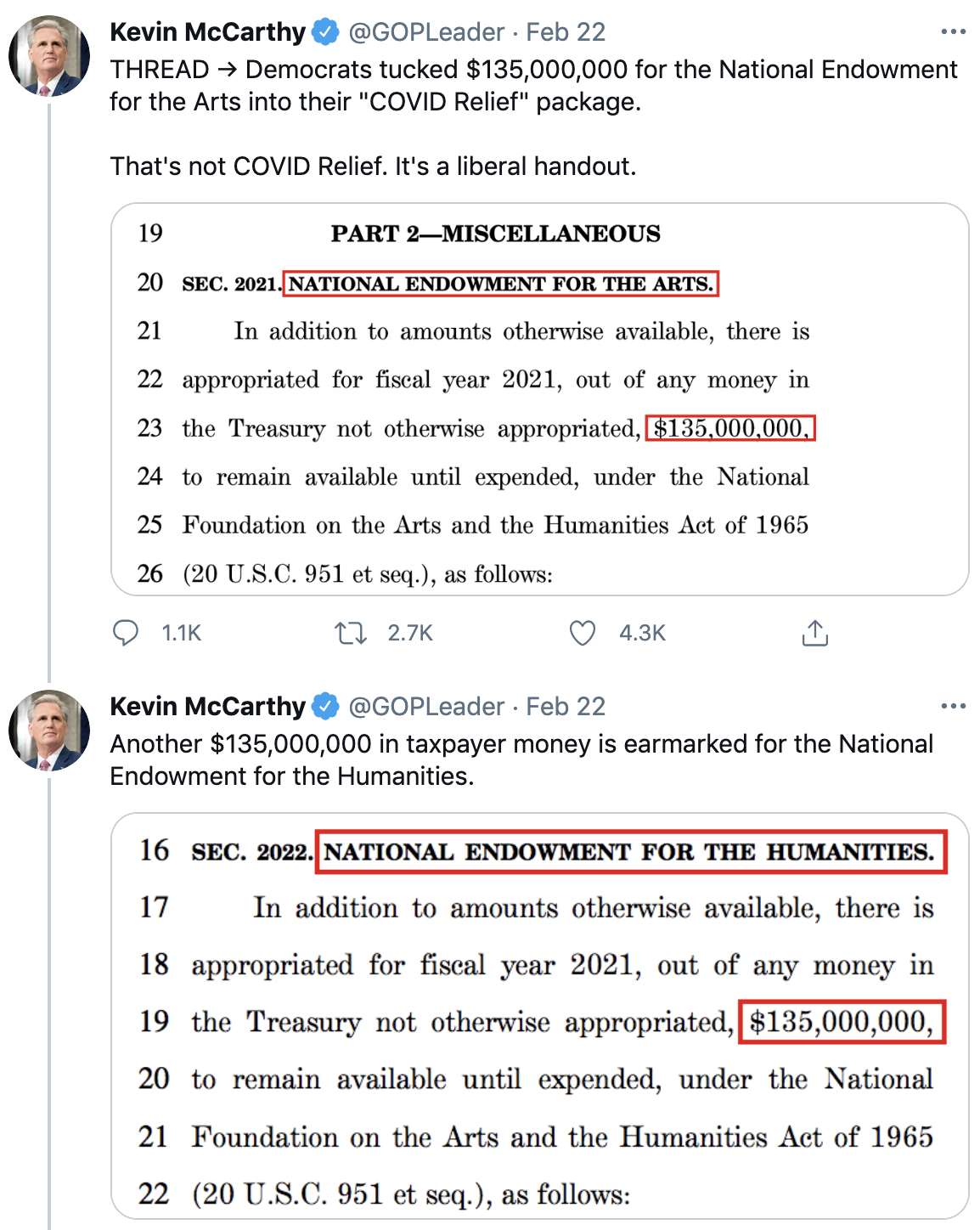 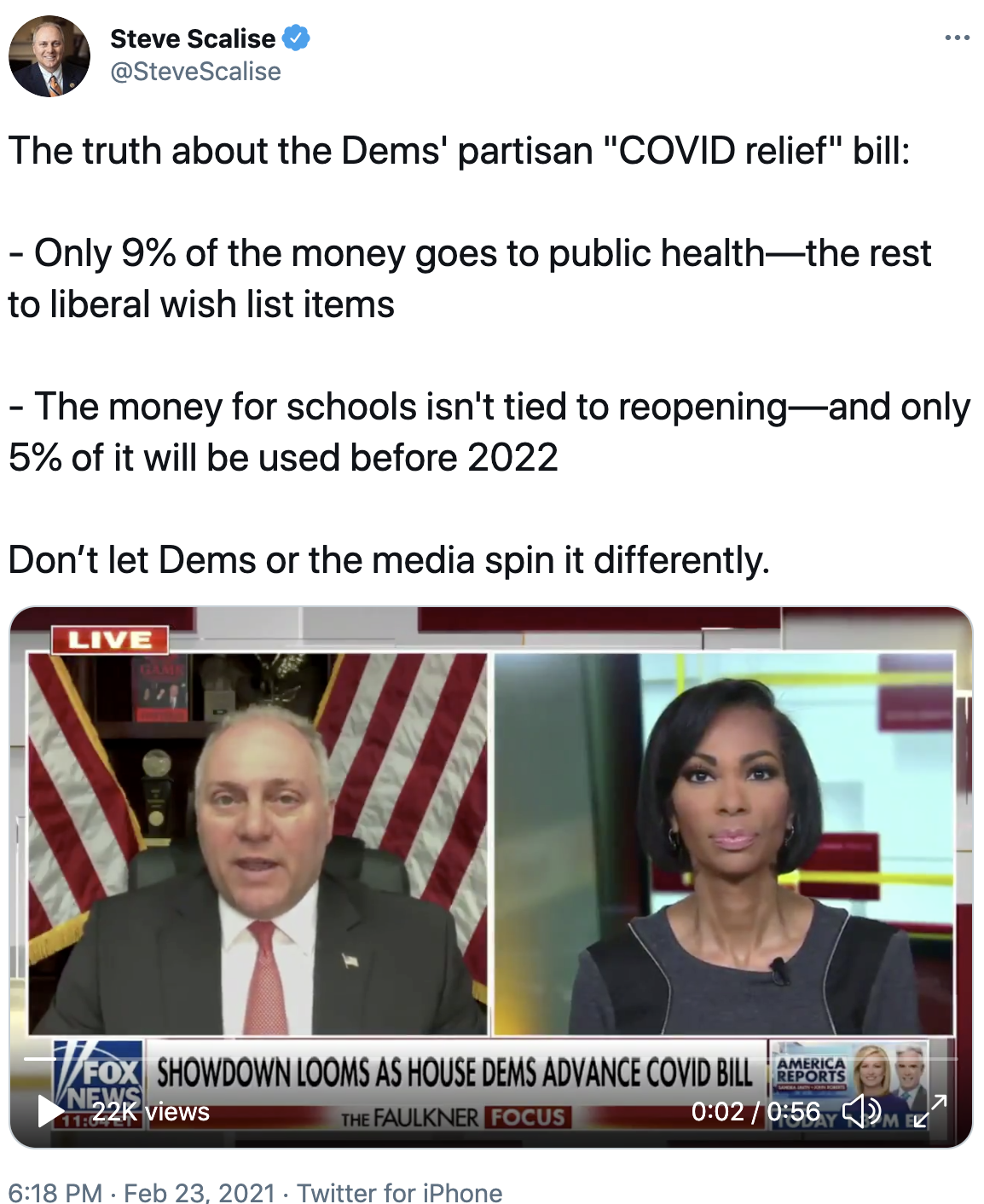 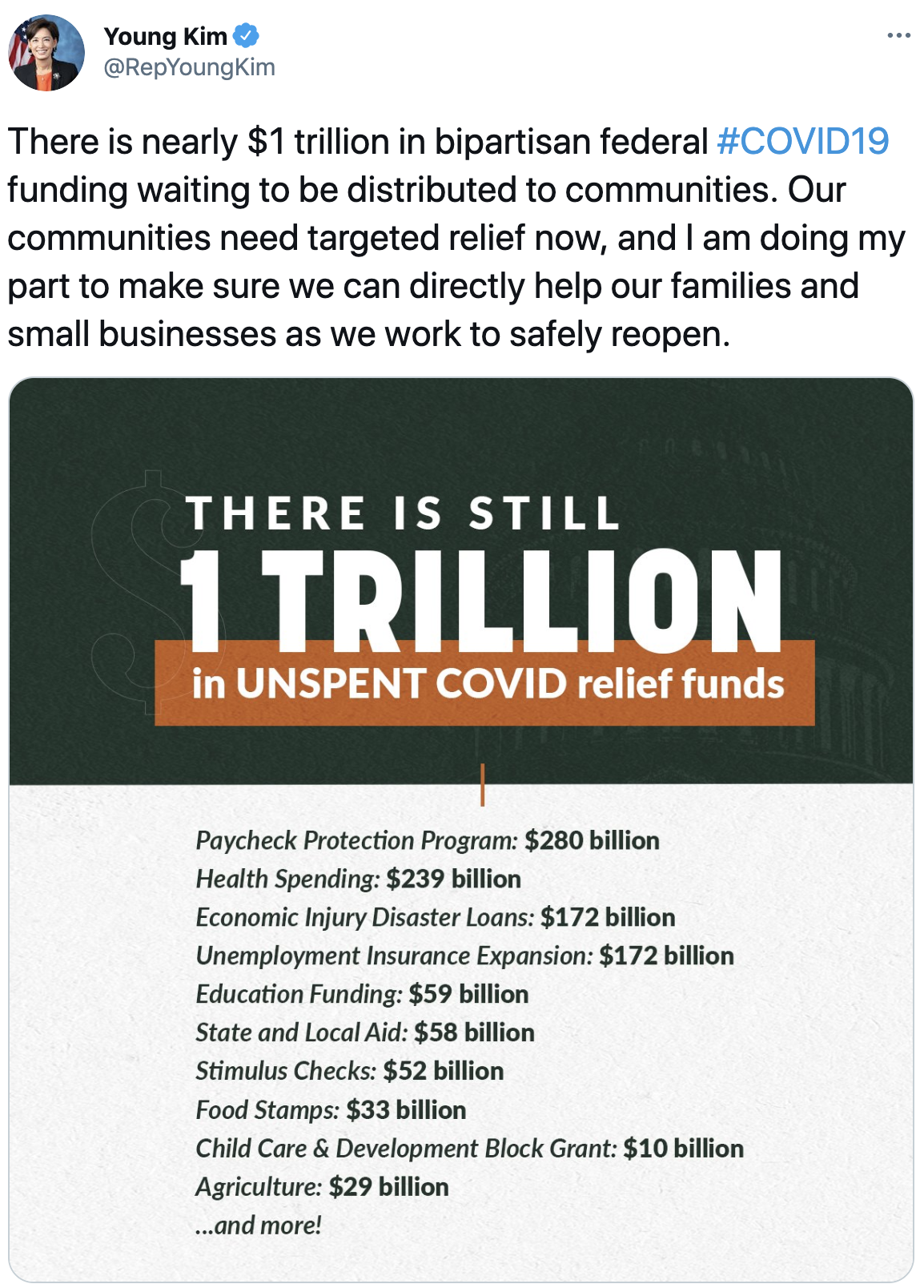 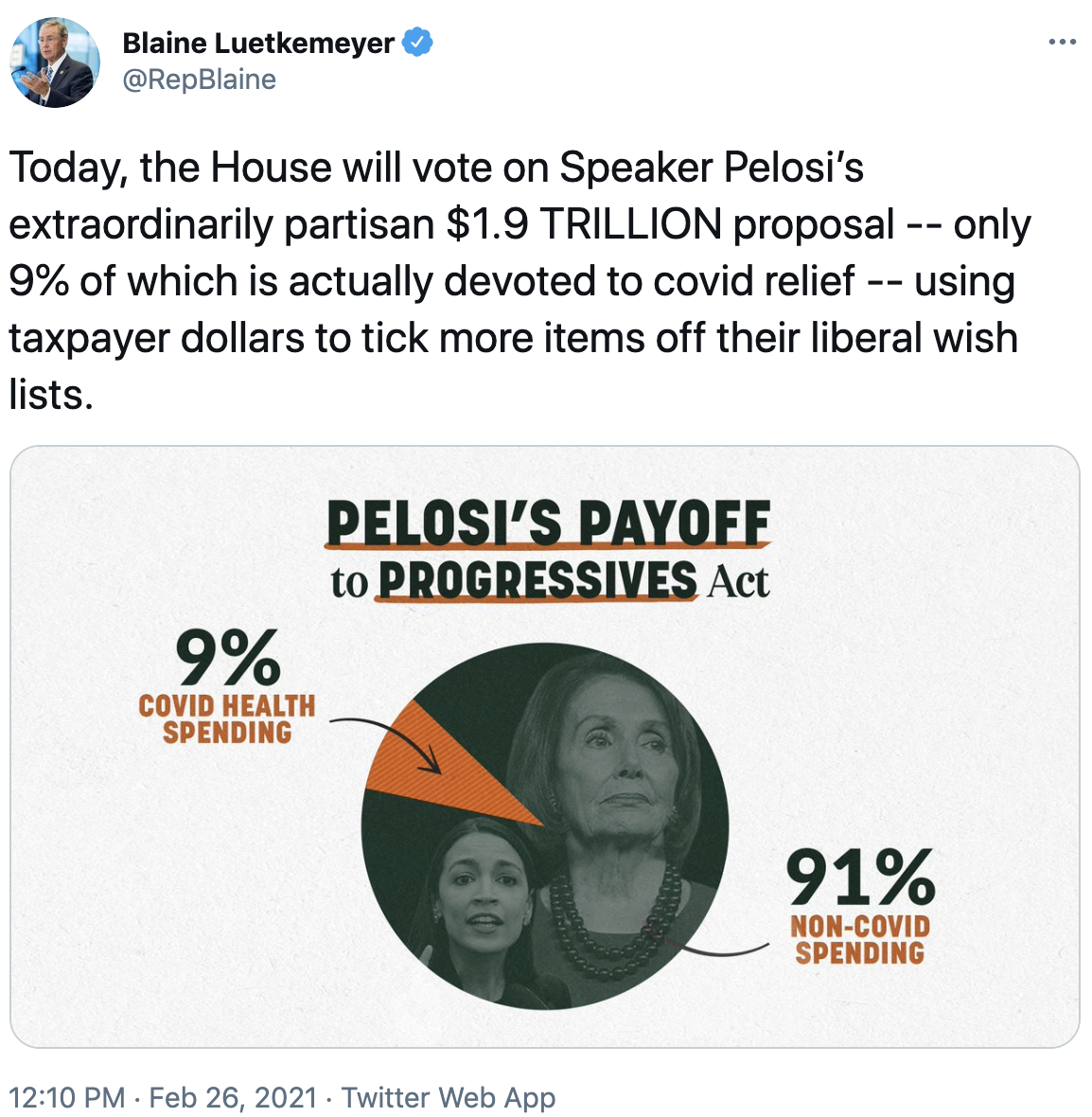 Rep. Ashley Hinson (R-Iowa) proposes an amendment to take away the carve out for Pelosi’s Silicon Valley subway and use that funding for students’ mental health services. 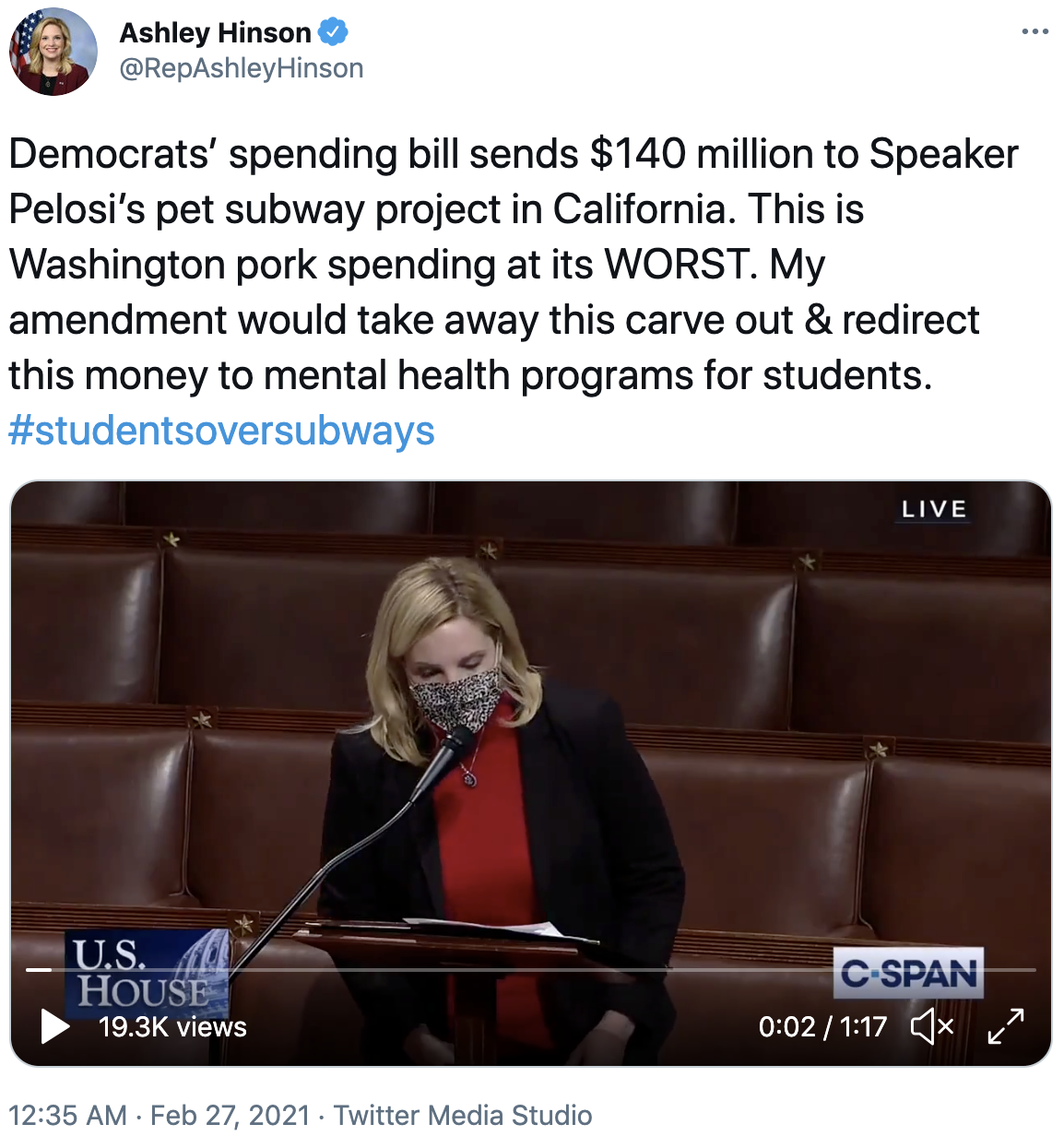 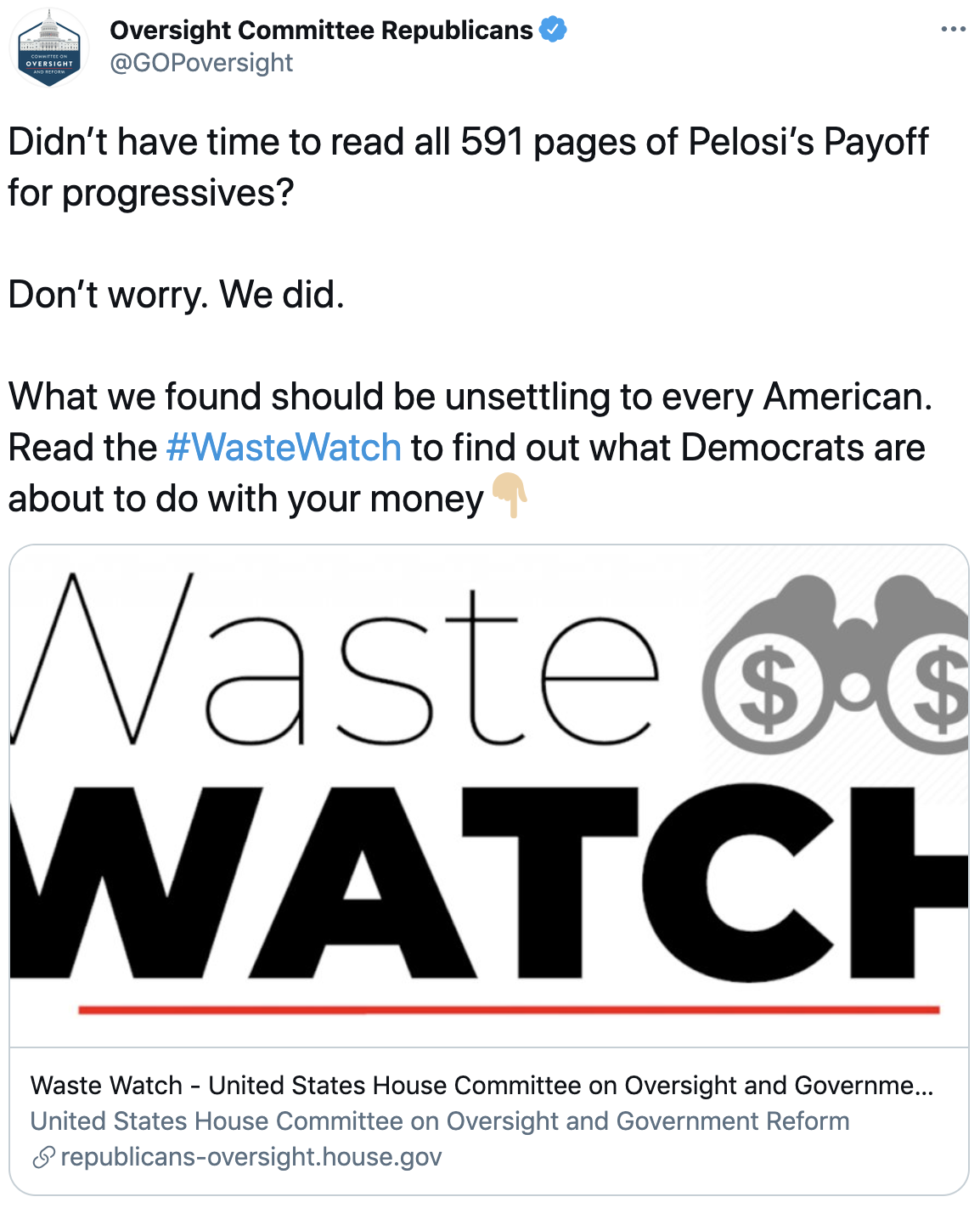 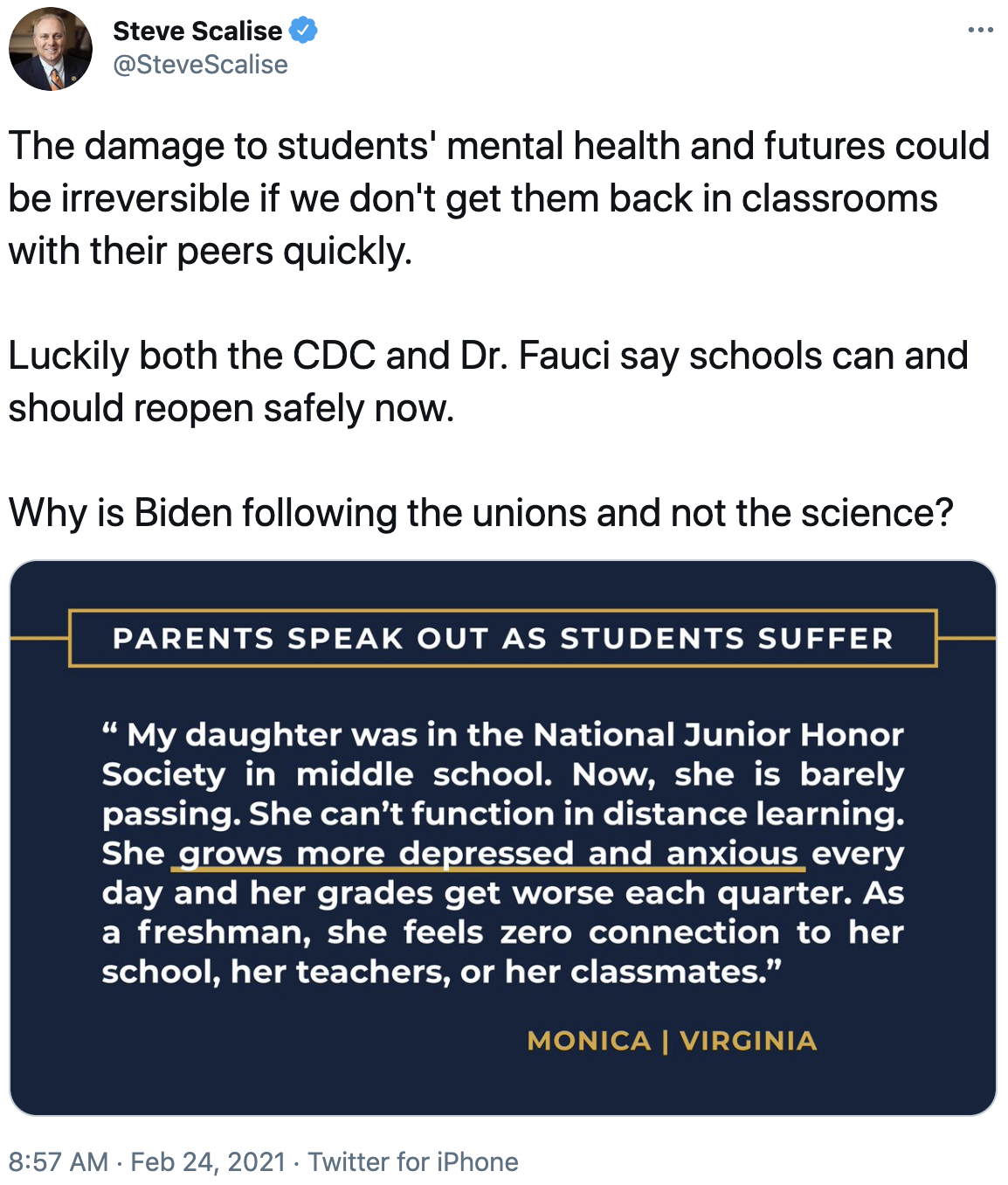